THE ASTROLOGY OF CATASTROPHE...

I have used Astrology in my personal life for years, to good effect. Sometimes, I get people who ask me “Do you believe in Astrology?” to which I reply “Do you believe in your car, your washing machine, your computer?” – no, you use them because they work, you don’t have to know how they work to use them, although it often helps if you do know something about how they work. Years ago, women generally were renowned for their ability to drive cars without having the foggiest idea of how they work, an extreme example being my own mother who once put water in the engine of the car instead of the radiator. I use Astrology because it works, I don’t have to know why it works. As a member of this site you will have seen for yourself time and time again in recent weeks that the Technical Analysis techniques I use do work – the latest example being the prediction made just yesterday for a dramatic reversal in the stockmarket. So I am not given to using things that don’t work.

Having said all that, I don’t use Astrology in my stockmarket work for two main reasons. One is that I don’t understand it in that way, and secondly my knowledge of and experience in using Technical Analysis is sufficient to get the job done. Having said that, like Mr Moriarty of 321gold, I am aware of the importance of full and new moons as often marking turning points in the metals cycle in particular, and that certain planets are associated with certain commodities, so the sun rules gold, as we would expect, the moon silver, and venus rules cocoa etc. and finally I am aware of the impact of powerful stelliums, or groupings of planets, on world events.

I am writing this article on the subject of Astrology at this time for the benefit of those of you who may have some interest in this, because it just so happens that we have been having one of the most powerful groupings of planets in history in recent weeks in the sign of Capricorn, which is, amongst other things, the sign of business and societal structures. Specifically, we have had the planets Mars, Jupiter, Saturn and Pluto in close conjunction within the last 10 degrees of this sign, as you will see on the horoscope shown below, and experienced astrologers have long viewed this baleful conjunction with foreboding. The planets of Mars, Saturn and Pluto have long been known as “the malefics” meaning that they can bring harm, especially when they are grouped together like this, which has some longer-term evolutionary purpose. This grouping reached maximum intensity when the moon swung into the stellium last week, which is why the horoscope chart for this time has been selected. So this point in time is taken to indicate the point of maximum intensity of the global crisis, especially as Mars and Saturn move out of Capricorn into Aquarius at the end of this month. Since the moon rules silver it also coincided with silver’s probable low point, and as the stockmarket moves to discount the future, it may also have marked an important bottom for the stockmarket, even though the coronavirus pandemic has yet to peak. Interesting stuff, I’m sure you’ll agree. On the horoscope the planet that looks like a 4 is Jupiter, the one next to it with a circle in a bowl is Pluto, the moon is obvious and the one at the top left of the grouping is Saturn. 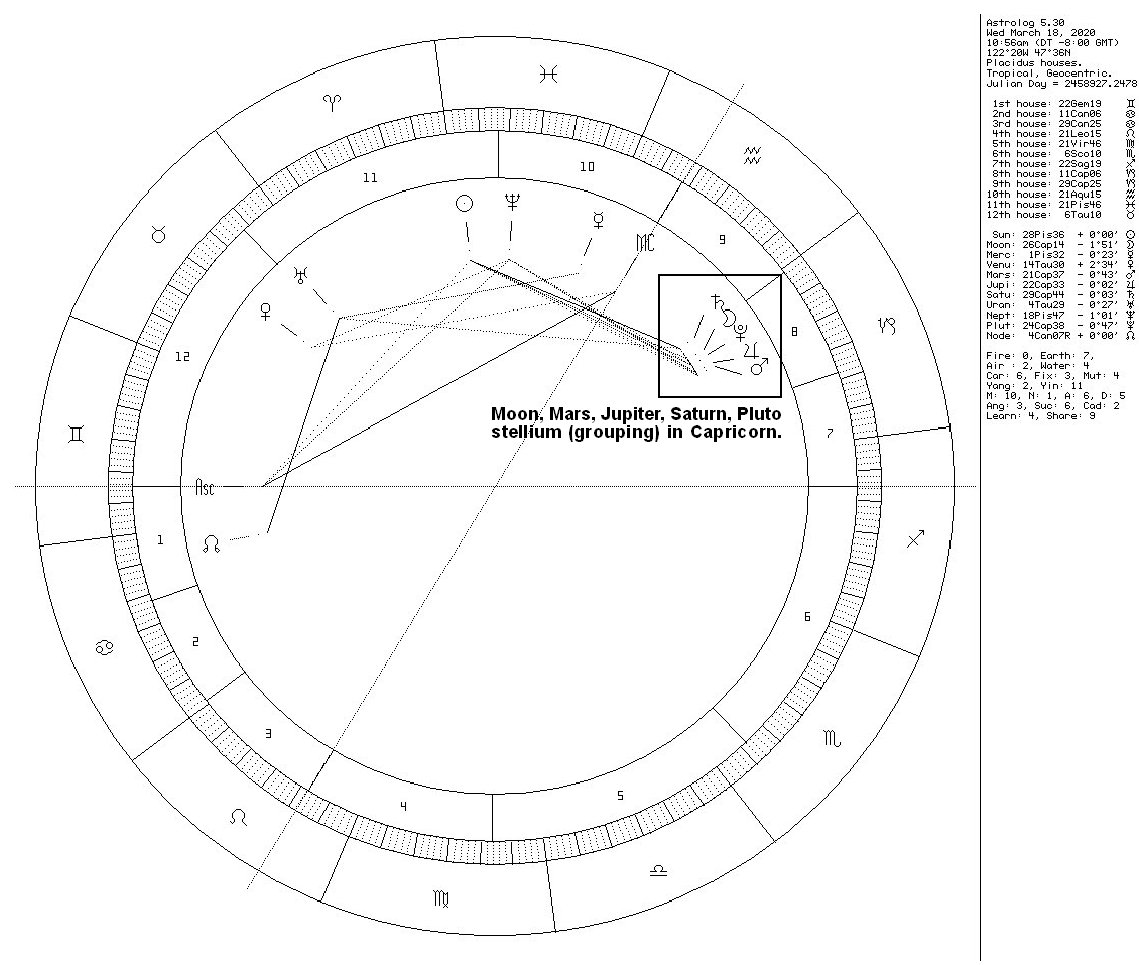 Click on horoscope to popup a larger, clearer version.

The best view of this stellium was to be had in the southern hemisphere, where I live in southern Chile was a good place to see it, although Pluto is way too far away and dim to be seen with the naked eye. I went out on my balcony before dawn and took some photos of it, several of which are shown below, and was fortunate to catch the moon conjunct Mars and Jupiter one morning at a time corresponding with the horoscope shown above. 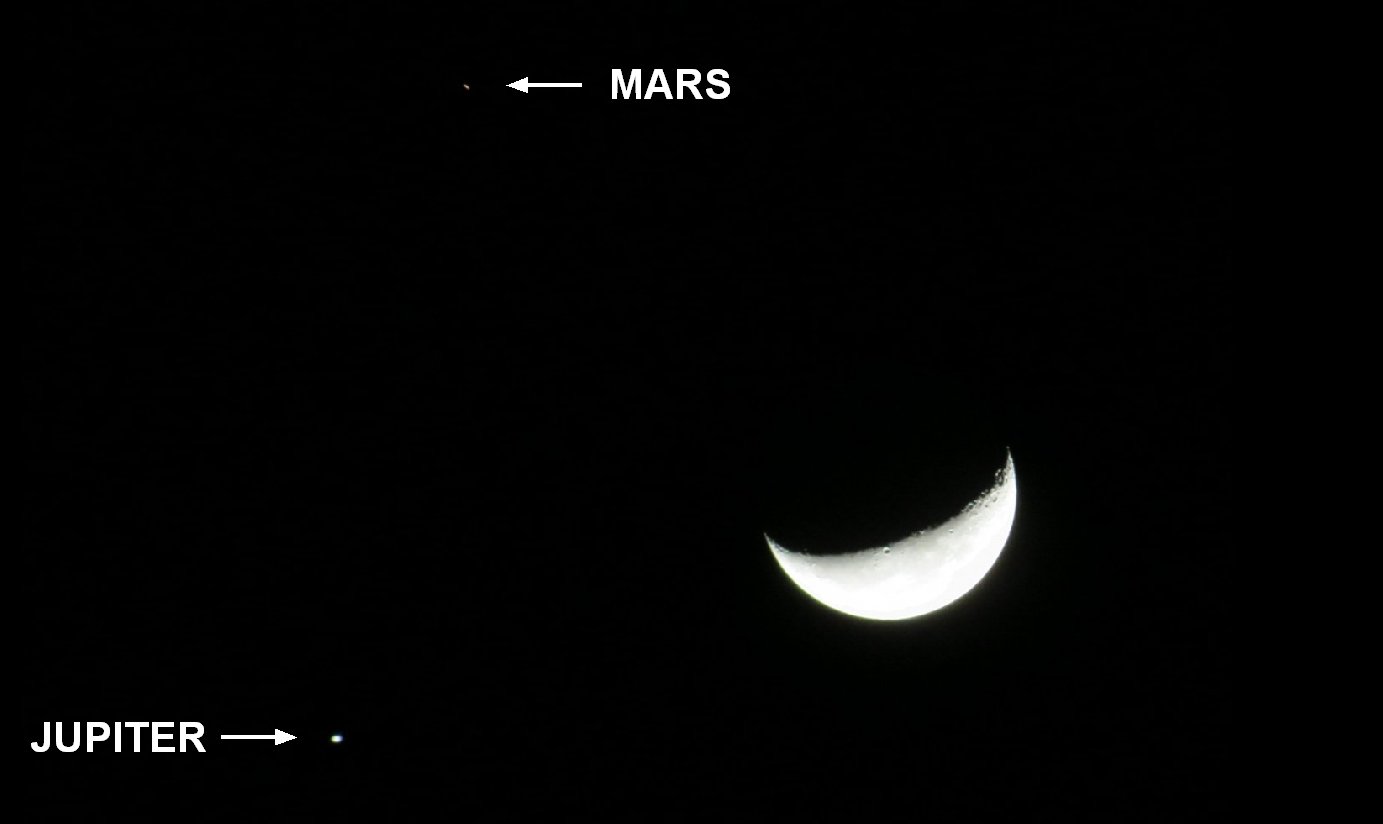 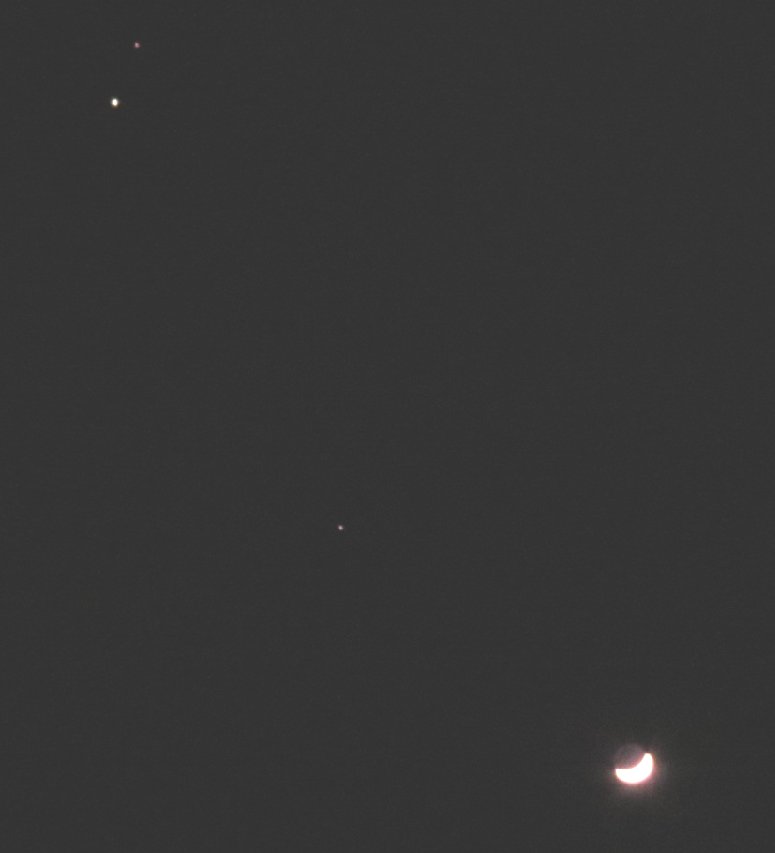 Although this photo won’t win any prizes, it does show the relative positions of these planetary bodies at this time. 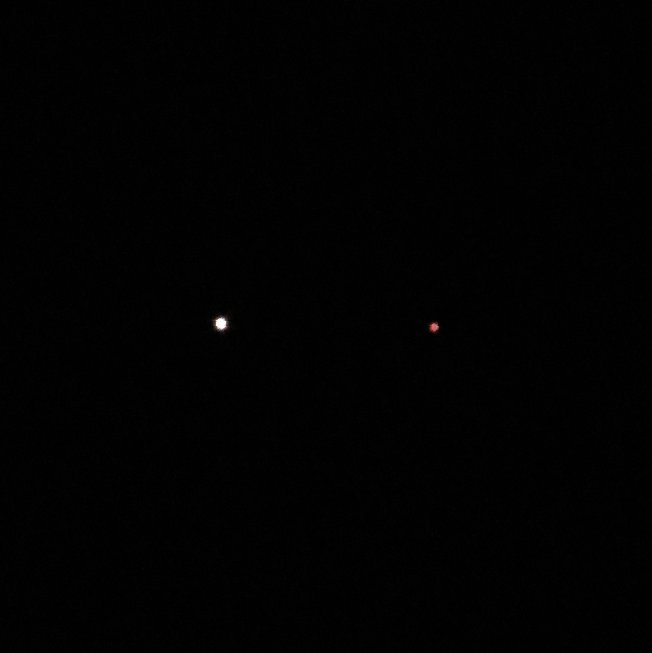 These aren’t great photos, they were taken with an ordinary Canon camera, not Mt Palomar, but they are what I saw.

As mentioned above the powerful planetary stellium is now set to ease, but the damage has been done, like the “everything bubble” imploding, global martial law being imposed, at least temporarily, and Trump signing into law an emergency requisition act, which allows the State to appropriate any company and its employees at will to use for its own purposes. Even though the stellium is set to unwind, the planet Pluto, associated with destruction and rebuilding, remains in the sign of Capricorn for another 4 or 5 years.

End of essay. Note that this article is not labelled as "off topic" because I don't consider this to be off topic.