REVIEW OF METALS CHARTS & IMPLICATIONS OF THEIR LATEST COTs...
Sunday, April 01, 2018
GOLD and SILVER COT update - GET 30,000 COFFINS READY...
Saturday, March 12, 2016
PM Sector longs have had a laugh at our expense over the past couple of weeks as gold has continued to edge higher after we called it down, but it is looking more and more like they will end up like those 4 fools in the classic Clint Eastwood Spaghetti Western, A Fistful of Dollars. Clint rides into a tiny flyblown town and the 4 fools shoot around his mule’s feet. After advising the undertaker to Get 3 coffins ready, having made a slight underestimation, Clint returns and challenges the 4 fools by saying “When you apologize to my mule like I know you’re going to”. Needless to say they do not respond in the required manner to this demand and so Clint quickly dispatches them to the great satisfaction of the undertaker. While the PM sector bulls have been working themselves up into a lather the Commercials have been piling up the shorts to a huge level, and since these guys are never seriously wrong, it means trouble, big trouble. If you go against them, especially at extremes, you are a fool. I have received any number of Emails in the recent past telling me that “It’s different this time” and that the COTs don’t matter etc, here is an example, which I have slightly edited with asterisks, because this is a family website where vulgarity is not permitted – “Same rules don’t apply. Big demand no supply. Paper commercials can go fu** themselves. No one is going to sell their physical at these sh** prices.” Now I don’t think that I need to tell you that when primitives like this are bullish, it’s time to watch out. I certainly do not believe that the Commercials are going to be outsmarted by people of this caliber. Let’s now proceed to look at the latest gold COT. We thought that it looked bearish a week ago, but Commercial short and Large Spec long positions have risen to an even bigger extreme, as the price has stalled out following a false upside breakout from a Pennant that we can see on the 1-year gold chart placed immediately beneath. This is now viewed as the perfect setup for a brutal smash, which is likely to occur very soon. While the fundamental trigger for such a drop is a matter of conjecture at this stage, one possibility is the announcement of a rate rise by the Fed next week that sends the dollar higher. 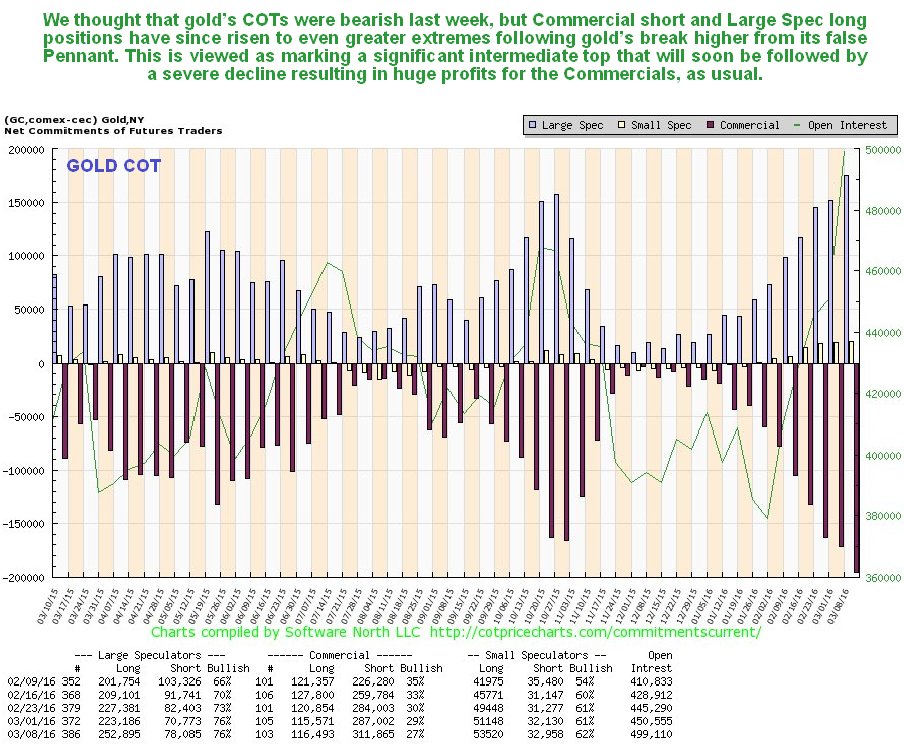 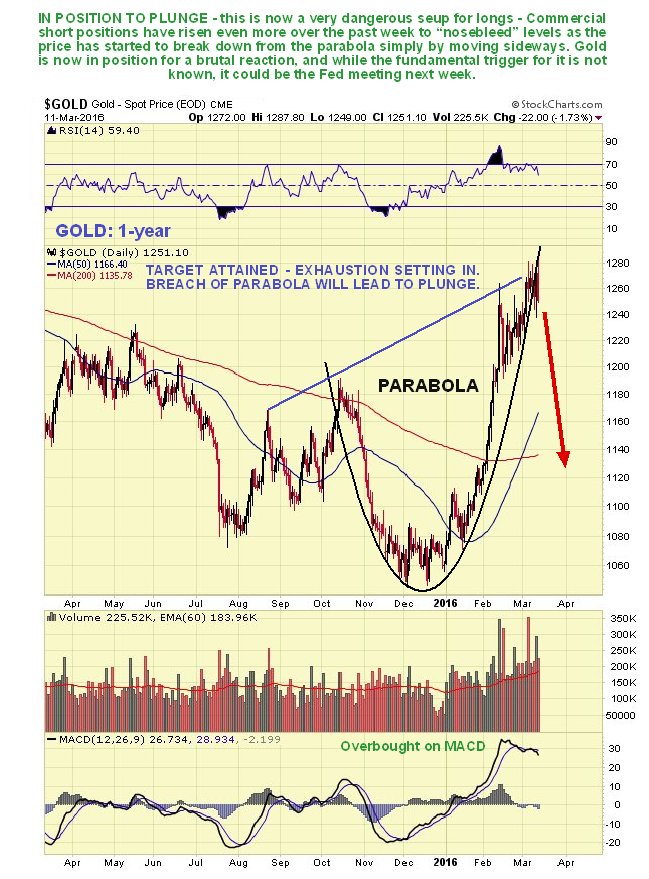 What about silver’s COT? After easing last week ahead of a sharp rally off the rising 50-day moving average, Commercial short positions are back up near to 7-year highs, and like the COT situation with gold, this means trouble. 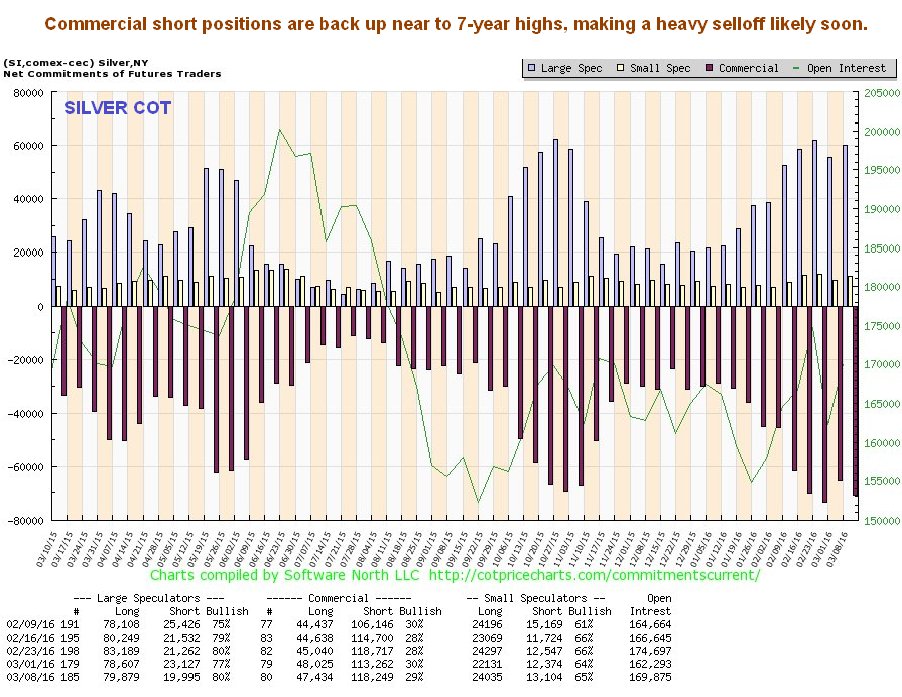 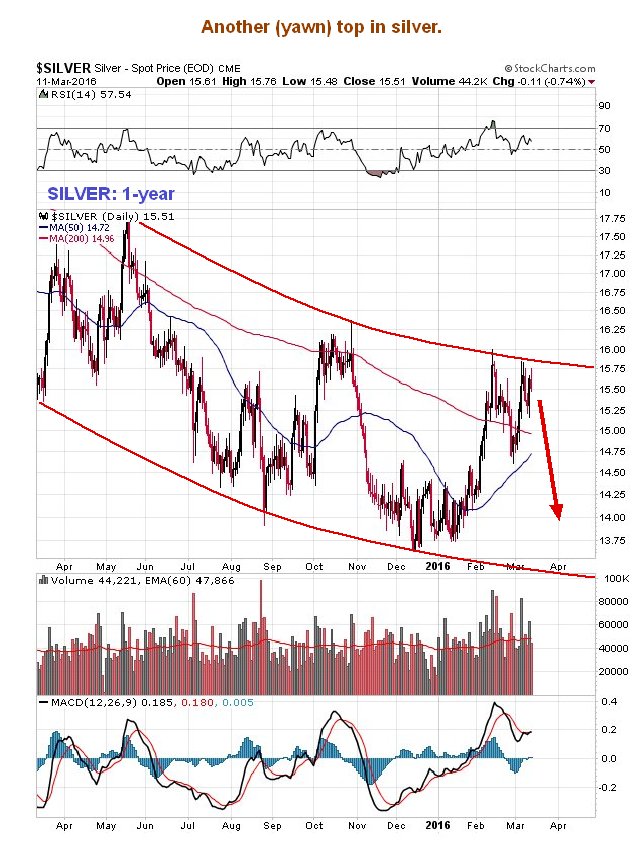 Meanwhile there has been a startling change in copper’s COT, just as copper has reached a critical point on its charts, having just stalled out at its falling 200-day moving average. What appears to have happened here is that the Large Spec shorts suddenly lost their nerve and bailed, probably at the worst possible time as usual, enabling the Commercials to finish closing out their earlier extensive long positions for a whacking great profit. This sudden big drop in Commercial long positions makes copper look very vulnerable again here. 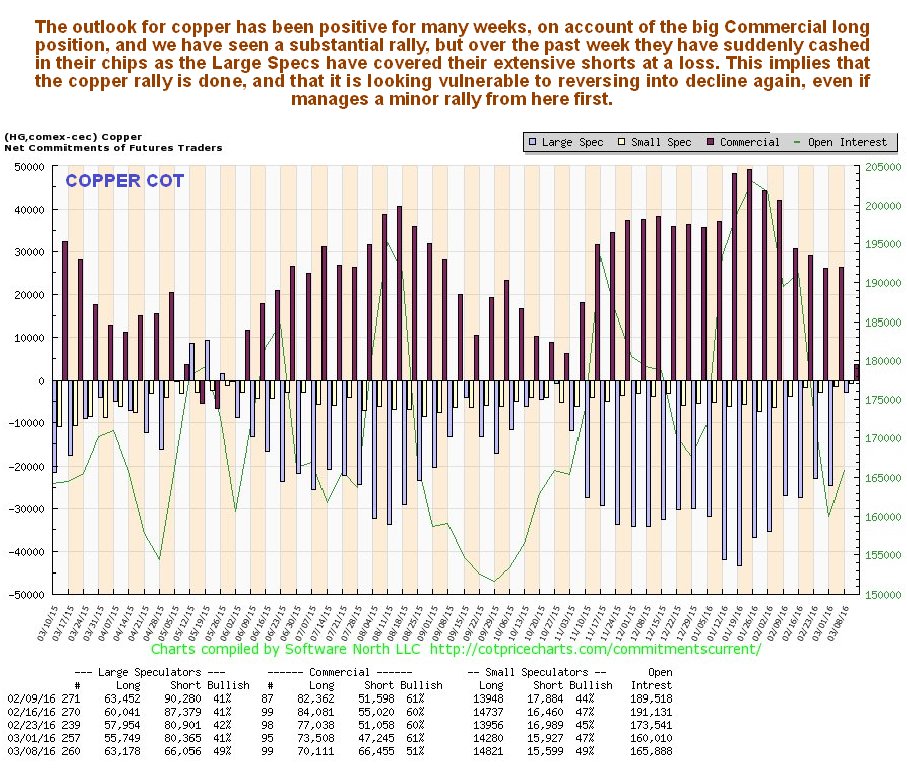 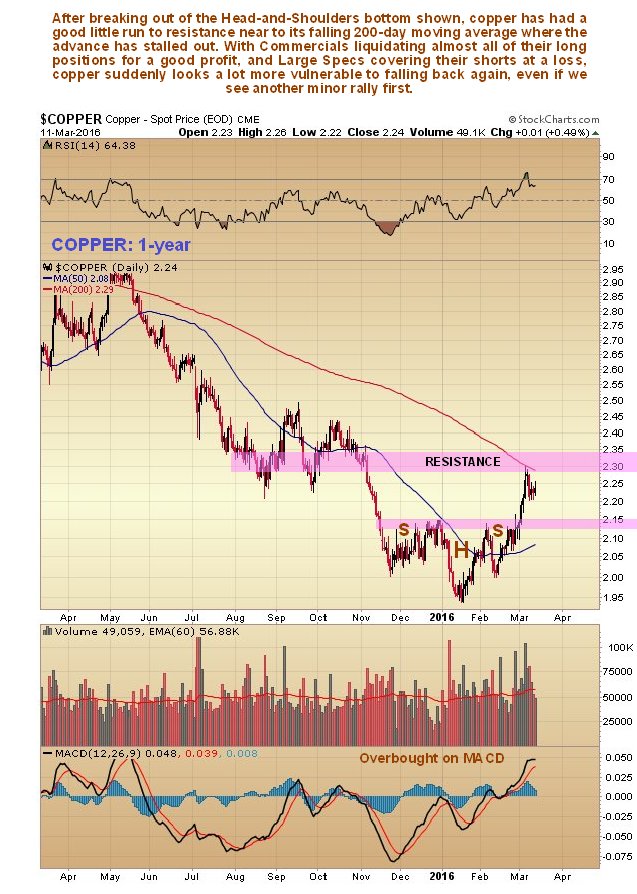 Another extraordinary development of recent weeks is that while the broad US stockmarket has climbed higher and higher, its COT chart has become more and more bullish, the polar opposite of what you would expect if this was a bearmarket rally, with Commercial long positions continuing to climb as Small Specs pile the shorts on ever higher. This is a truly bizarre situation because the charts do look bearish. Since the Commercials are never seriously wrong we take this as a stern warning not to dare to short this market, and it could be an early warning that the market is going to abort, or break out above the confines of the giant Dome visible on long-term charts. While the reason or reasons for this are as ever a matter of speculation, a big one could be a torrent of funds flowing into US markets from around the world, as a flight to safety from other much more troubled parts of the world. If this is indeed a major reason, we could see both the dollar and US stockmarkets rising in tandem, which would of course take the wind out of gold’s sails. However, should Commercial long and Large Spec short positions collapse as the Dome boundary on the S&P500 index is approached, we will stand ready to short it. 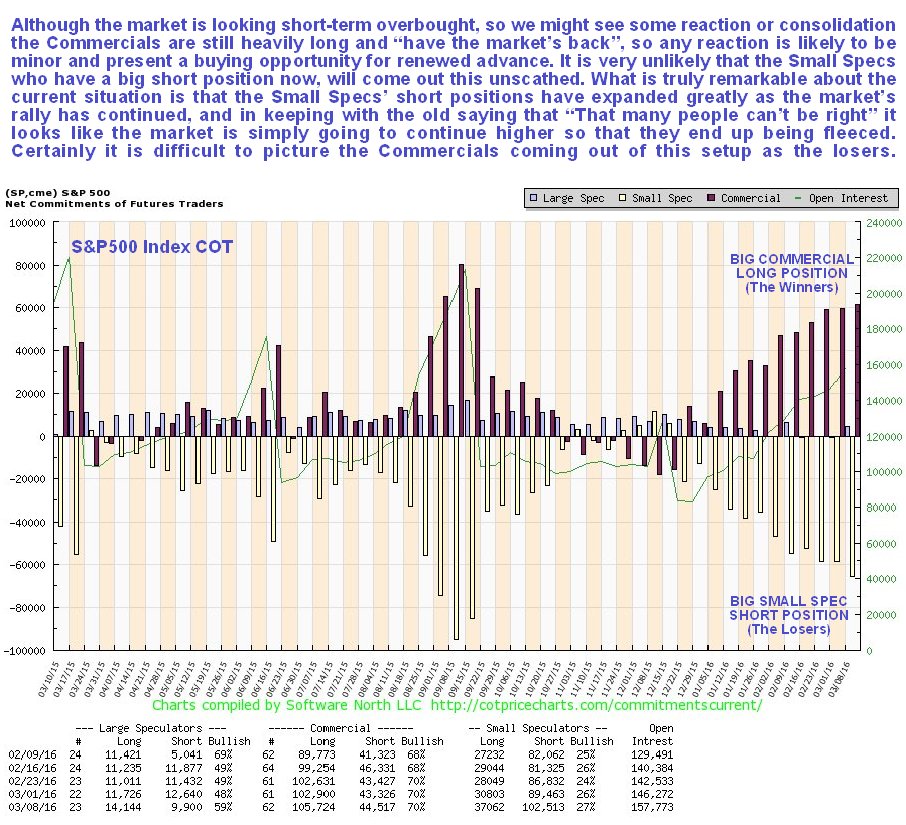 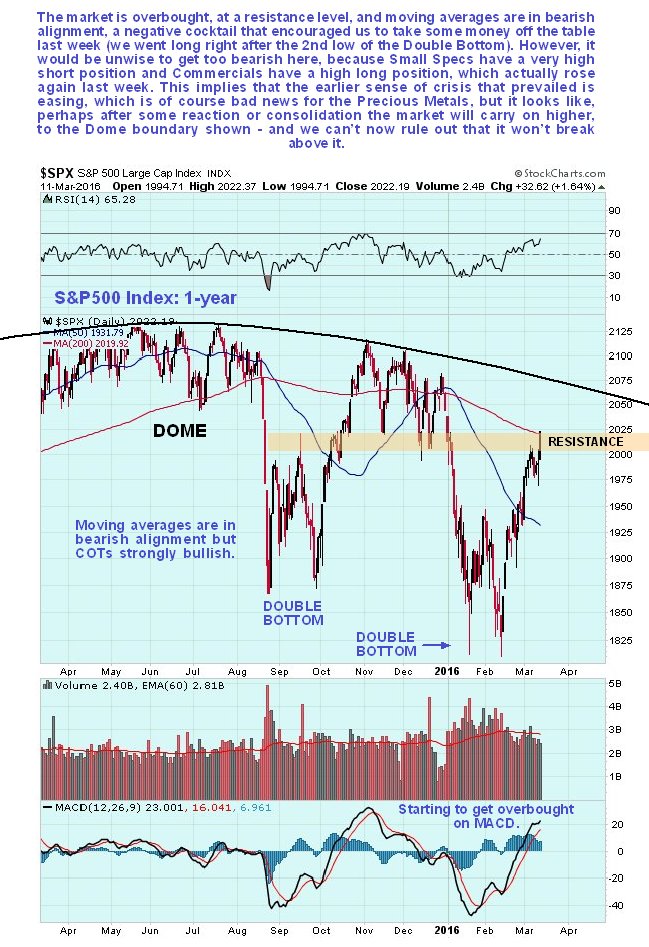 Conclusion: gold and silver Commercial shorts are at “nosebleed” levels calling for a smash soon, which might be precipitated by the Fed next week. Copper, after looking bullish for weeks, suddenly looks vulnerable, with Commercials rapidly liquidating nearly all their remaining longs. The broad stockmarket COTs are ever more bullish, suggesting that the Small Specs, who have been piling on the shorts, are going to be slaughtered. Oh, and by the way, my mistake, 40,000 coffins. End of update.
Posted at 8.30 am EST on 12th March 16.