Silver Market Update - IN POSITION FOR A GOOD JANUARY...

Silver Market Update - IN POSITION FOR A GOOD JANUARY...
Sunday, January 02, 2022
SILVER INTERIM UPDATE - at bottom of trading range and at strong support...
Wednesday, October 06, 2021
SILVER REVIEW at KEY JUNCTURE...
Thursday, July 29, 2021
Given that we are right now starting the seasonally most bullish month of the year for silver, it looks very promising here as it is already starting to rise away from the 2nd low of a Double Bottom, as we can see on its latest 6-month chart below. Thus it looks likely that the uptrend which started about 2 weeks ago will continue at least to the 1st resistance level shown. On the 2-year chart we can see that this Double Bottom formed at the lows which occurred during the 2nd half of 2020, with big support in this zone arising from its being the upper boundary of the giant base pattern that developed from 2013 – 2014 through mid-2020. Thus the large trading range from mid-2020 to the present looks like a consolidation pattern which is made more likely be the relatively strong volume indicators and the fact that inflation is now ramping up, which should be good for all commodity prices, not just silver. This is a good point to mention the argument now prevalent that the silver price can’t rise because powerful manipulators are dumping paper silver on the market to keep the market suppressed. Given that inflationary pressures are mounting fast we can say that to whatever extent this is going on it will lead to a widening gap between the paper price and the physical price which will eventually become untenable leading to a price explosion. In a strongly inflationary environment the price of physical silver must rise and in such a situation physical buyers would buy direct, bypassing the paper markets, and the mines themselves would end up selling their product direct to physical buyers, rendering the paper market irrelevant. 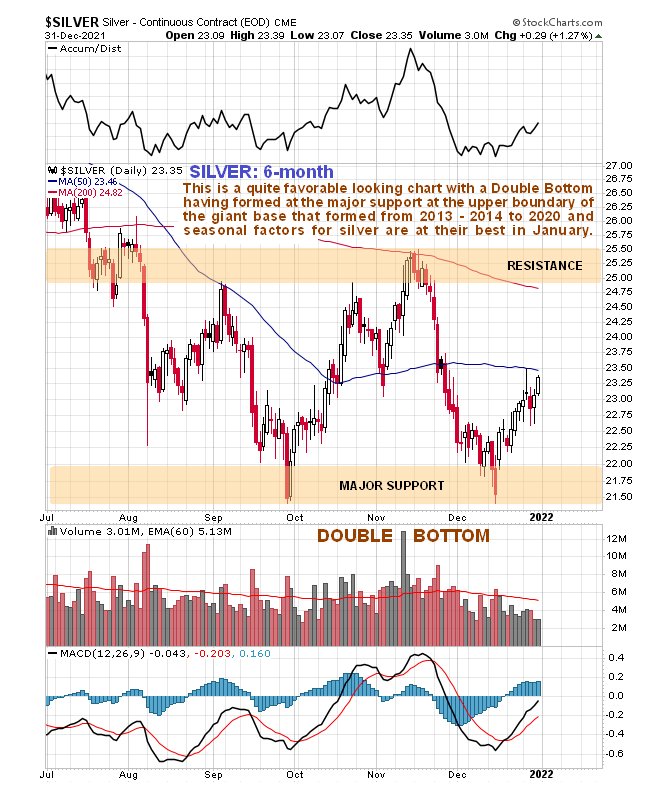 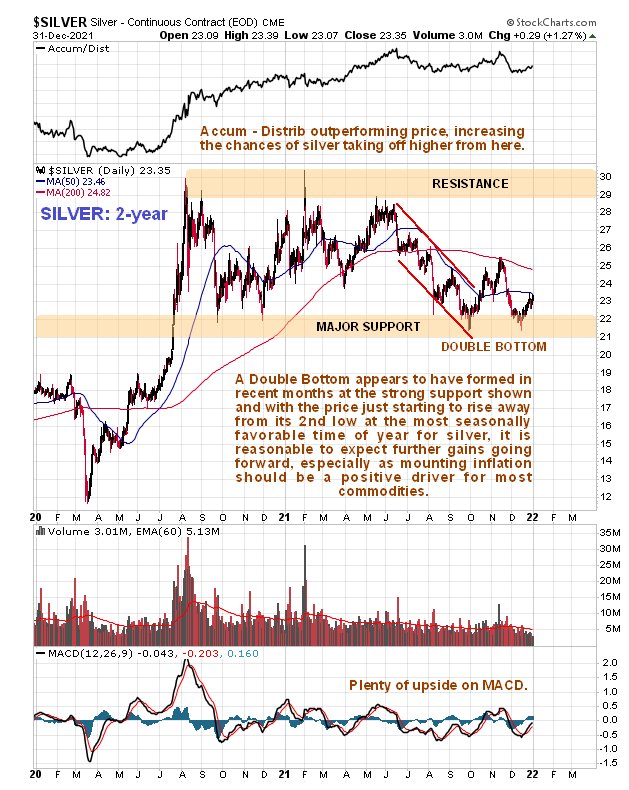 On the 13-year chart we can see how after a peak in April – May 2011 a large top pattern formed that broke down into a bearmarket that finally hit bottom late in 2015, although the giant base that this led to actually started to form in about 2014. The price broke out of this giant base in the middle of 2020 and has since been consolidating this breakout in a large trading range, with silver being a buy whenever it has arrived at the support at the bottom of it. 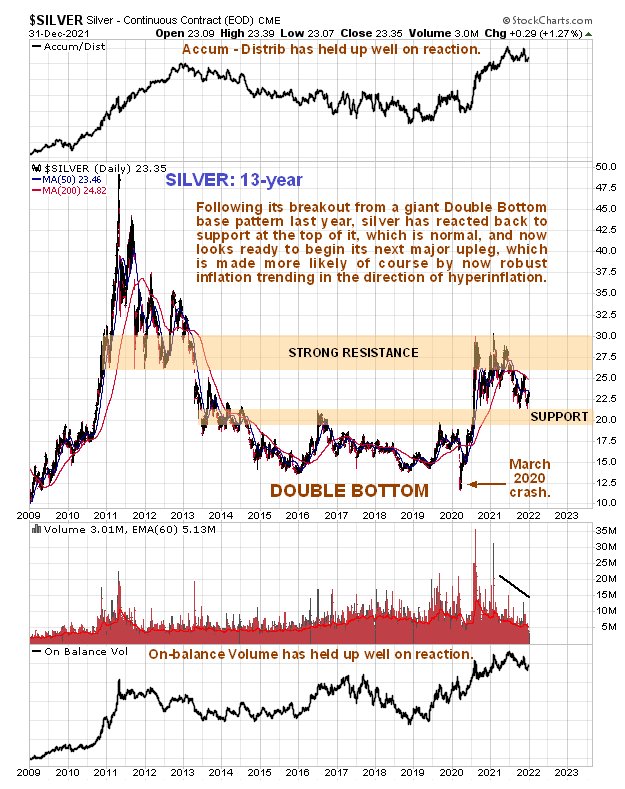 Now here’s some good news – silver is just starting its seasonally most bullish month of the year by far, as the following chart makes very clear… 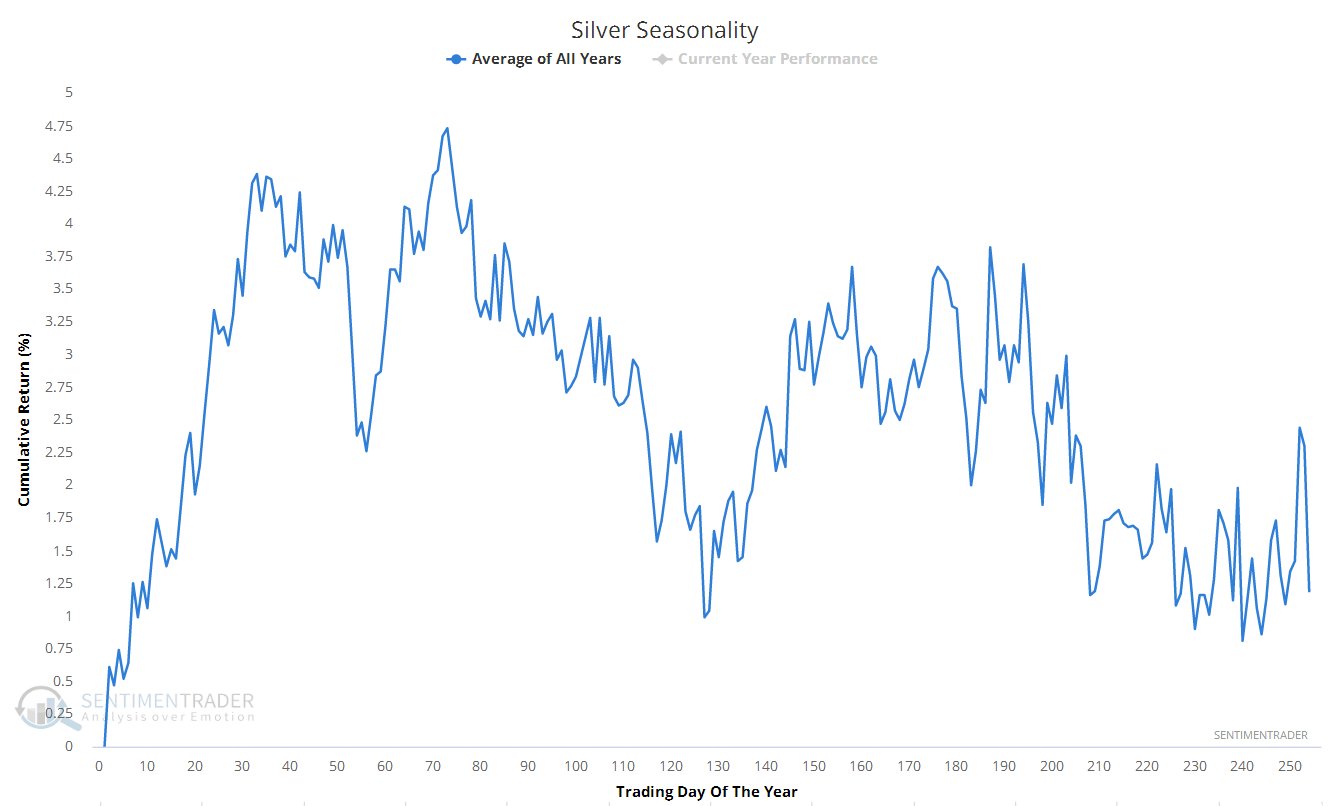 Chart courtesy of sentimentrader.com
This chart certainly suggests that silver is in for a good month, and as we saw above, it’s in position for it. COTs are not shown because they are in middling ground and don’t give much indication one way or the other, if anything they are somewhat bullish. Lastly it’s worth taking a look at the silver to gold ratio, because when this is at extreme lows it shows a high probability that a bullmarket will develop. On the chart for this ratio from 1990 it shows that it was at an all-time extreme low in March of 2020, and a bullmarket did develop. Although well off this freak low, it is still at a low level, indicating a high probability that a sector wide bullmarket will develop going forward. Back in 2011 at the last bullmarket peak it got to about 0.031. 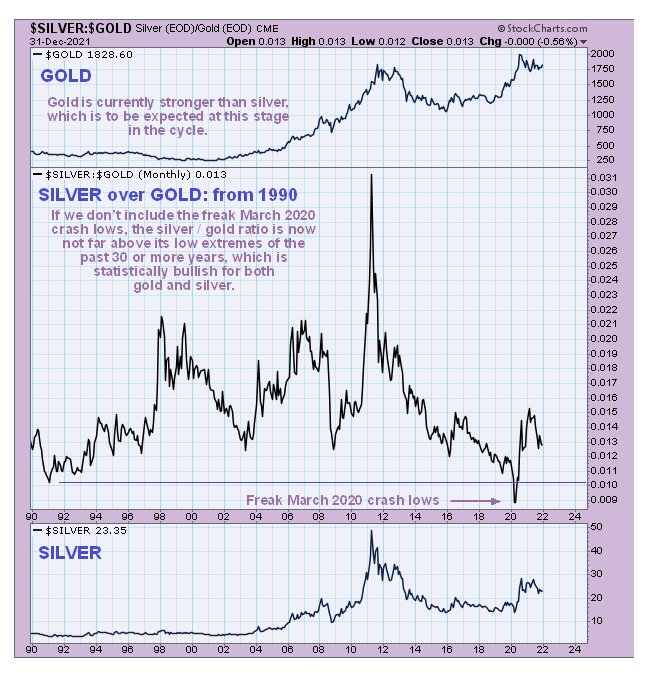 Yet the very long-term chart shows that this ratio can get a lot more extreme than it did in 2011. On the chart going back to 1980, which includes the very tail end of the great 1970’s Precious Metals bullmarket, we can see that it got as high as 0.054 and it is clear that in a highly inflationary environment it could even exceed that. On both these silver to gold ratio charts you can see that gold looks considerably stronger than silver, which is normal at this stage of the cycle, and we will soon proceed to look at gold’s charts. 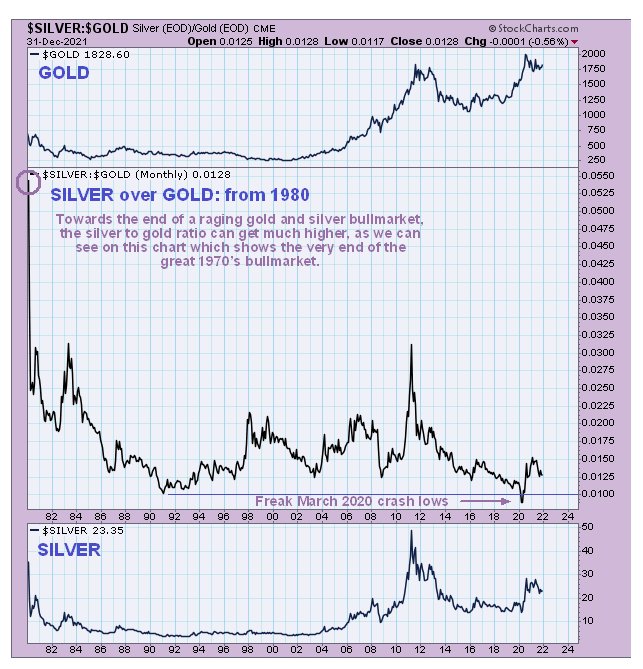