TORCHLIGHT ENERGY RESOURCES update - TAKE PROFITS IMMEDIATELY...
Wednesday, June 16, 2021
TORCHLIGHT ENERGY RESOURCES...
Sunday, June 06, 2021
TORCHLIGHT ENERGY urgent update ...
Wednesday, December 23, 2020
We got stopped out of Torchlight about even at $1.05 at the end of September before it broke down from a Head-and-Shoulders top and dropped hard. Then we missed the chance to pick it up at a very good price near recent lows. The story with this company is not that it has failed to deliver, but rather delay, which has resulted in some investors getting bored and frustrated and jumping ship, but now this looks like it is about to be remedied. 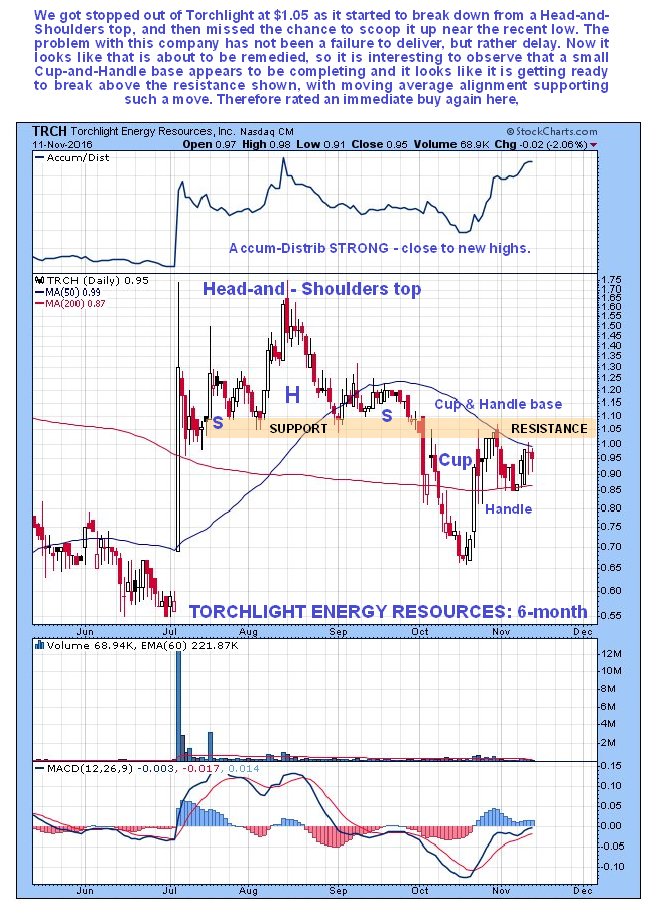 On the latest 6-month chart for Torchlight, it initially looks like it is rolling over beneath resistance at the underside of the Head-and-Shoulders top and is going to head south again, but on closer inspection we can see that a small Cup and Handle base may be completing, an interpretation that is given a lot more weight by the Accum-Distrib line, which is strong, being as it is close to new highs. So it looks like Torchlight is suddenly going to break above this resistance, which will be a very bullish development, and moving average alignment alignment certainly supports such a move, as price and moving averages are tightly bunched and the latter could quickly swing higher into bullish alignment. Conclusion: Torchlight is a buy again here, and should you wish to employ at stop the suggested position is (closing) $0.84. Torchlight Energy website Torchlight Energy Resources, TRCH on NASDAQ CM, closed at $0.95 on 11th November 16.
Posted at 5.00 am EST on 14th November 16.