SOLAR STOCK IN POSITION FOR ANOTHER BIG UPLEG...
Saturday, April 18, 2020
UGE INTERNATIONAL...
Sunday, February 17, 2019
UGE INTERNATIONAL update...
Friday, June 23, 2017
We have not been minded to sell UGE, which we went for back in December at C$0.315, because both the charts and the fundamentals looked so positive. Since then it has written about in positive terms several times in updates. Yesterday UGE ignored the malaise in the broad stockmarket and surged 18% on dramatic record volume, breaking out of the bullish Rising Triangle shown on its 6-month chart below. This Triangle served to allow the earlier overbought condition to unwind and allowed the 200-day moving average to swing into a more positive alignment. Yesterday’s action, coming on top of all the earlier positive action, was very bullish indeed, and although it could react back towards the upper boundary of the Triangle in coming days or weeks, which would be normal, this is now a very strong picture. 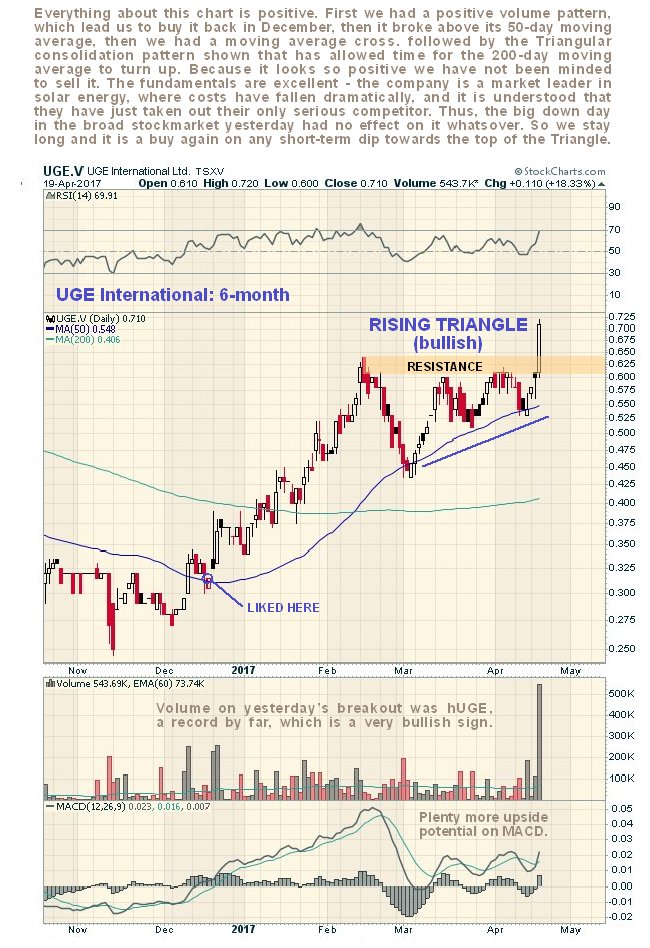 The long-term chart is also entirely positive and shows that UGE is just entering the dynamic Stage 2 growth phase of its lifecycle. There is still a lot to go for here and it sure beats investing in Treasuries. The basics of the fundamental story are this. UGE is a market leader in solar technology, especially for business situations, and it is understood that it provides and instals solar panels etc free of charge, and then sells the power generated into the grid while reducing the users’ electricity bills. A big reason that this business is becoming so profitable is that the capital cost of this solar technology has dropped like a rock in recent years. 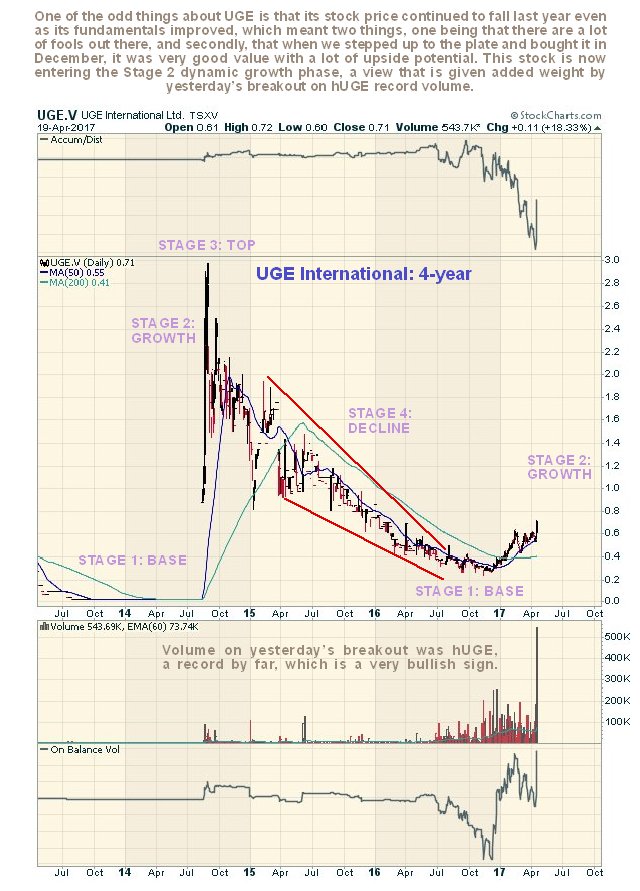 So we stay long, and the stock is a buy on any dip back towards support at the upper boundary of the Rising Triangle shown on the 6-month chart above. UGE trades in rather light but reasonable volumes on the US OTC market and has a reasonable 36 million shares in issue. Stockcharts users may be tickled to learn that the color selected in the drop down color list for the charts is – you guessed it – “Solar”. UGE International website. UGE International Ltd, UGE.V, UGEIF on OTC, closed at C$0.71, $0.506 on 19th April 17.
Posted at 7.00 am EDT on 20th April 17.