SILVER INTERIM UPDATE AFTER SILVER LONGS "TAKEN TO THE WOODSHED"...

Silver Market Update - nice buy spot for the sector...
Tuesday, March 09, 2021
A LOOK AT SILVER...
Thursday, March 04, 2021
VERY GOOD NEWS FOR SILVER SECTOR INVESTORS...
Friday, December 04, 2020
The writing was on the wall weeks ago, when silver’s COTs reached insane extremes, and so we called for silver to get slammed in the last Silver Market update. For a few days after that was posted silver, and especially gold, continued higher, thanks to Trump’s military adventures in the Mid-East and threat to N Korea, and the hate mail started to trickle in, which was another sign that silver longs were about to take a broadside, and that is exactly what has happened, as you will see on the latest 6-month chart for silver below. 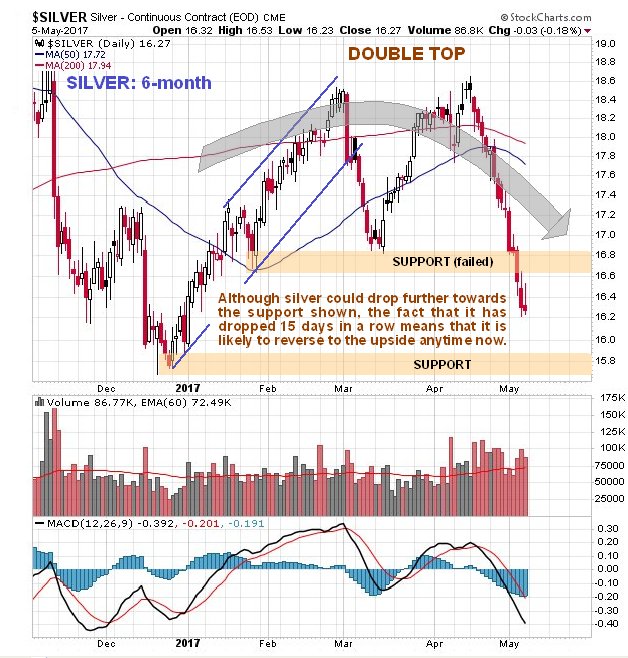 What is odd about this drop in silver is that, apart from one tiny up day, it has now been falling for 15 trading days in a row, or 3 weeks. This sort of move is very unusual and often leads to a significant snapback rally. Even if the core trend is now down as shown by the arching grey arrow on the chart, silver is now very oversold relative to it and on its MACD indicator, making a reversal and rally likely, and the only question is whether it first drops to the lower support level before reversing or not. There is an amusing article about the drop on King World News, which makes it clear that silverbugs never see these drops coming and when they do happen blame manipulators. This is not to say that there isn’t any truth to what these people say, but as pragmatic traders we have to roll with the punches, and that means being bearish ahead of big drops, as we were before this last one. Silver COTs have eased significantly over the past couple of weeks as we would expect, enough to permit a snapback rally, but not enough to declare that the setup is bullish, as we can see on the latest silver COT chart below. 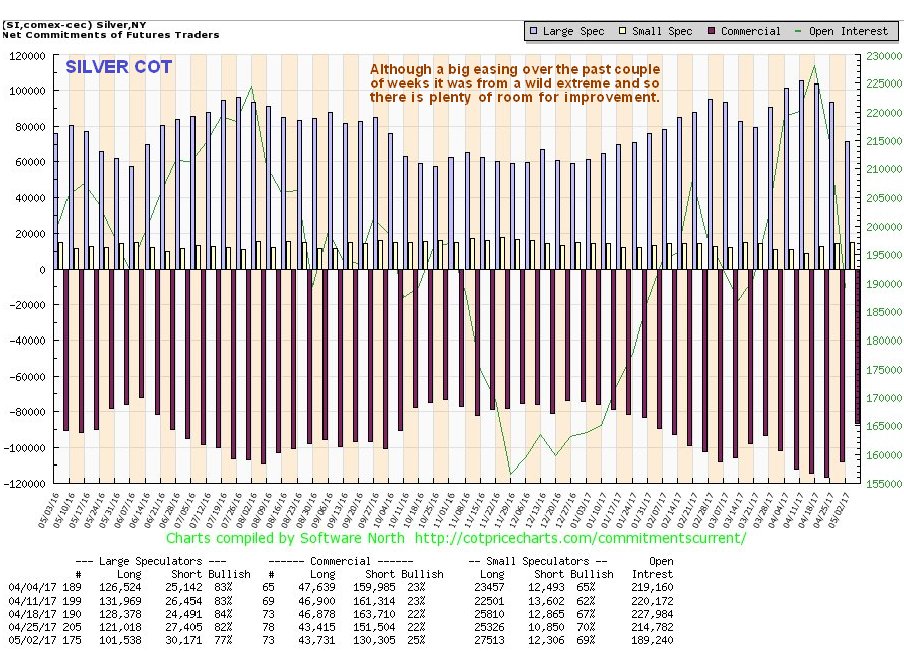 Click on chart to popup a larger clearer version.
What now? – well, as mentioned above, silver could drop further short-term, perhaps to the lower support level shown on our chart, but probably not below it in the foreseeable future, but the big run of down days means it could reverse to the upside at any time – watch for the 1st big white candle to mark the start of a reversal. Longer-term COTs must ease further to open the way for a significant silver advance. End of update.
Posted at 11.50 am EDT on 7th May 17.