MARKETS PULL BACK FROM THE BRINK - IS THIS THE VAUNTED FED PIVOT?...
Saturday, October 22, 2022
OUTLOOK FOR US STOCKMARKET AFTER BOUNCE FROM OVERSOLD YESTERDAY...
Thursday, September 29, 2022
TIMING THE US MARKET CRASH - A ROADMAP...
Friday, September 16, 2022
You’ve got to feel sorry for poor old Mom & Pop – after about 8 or 9 years of sitting on the sidelines, they finally get conned into venturing into the stockmarket at last, only to get promptly lynched. Somebody’s got to get left holding the bag, right? On 29th January it was written in BROAD US STOCKMARKET MELTUP update “The higher is gets the more dangerous it becomes, and now we have news that this meltup in the broad market is being driven by the retail investor, just as we would expect going into the top. SentimentTrader reports that so far this month, 34% of the trades have been accounted for by E-Trade and TD Ameritrade, more than triple the low in 2016, with daily average revenue trades skyrocketing.” Looking at the latest 6-month chart for the S&P500 index, we can see that it reversed on Friday, at its rising 200-day moving average, leaving behind a bullish high volume candlestick on its chart that approximates to a hammer. Thus it now looks like we will see a more significant bounce before the market drops to the 1st downside target shown on the 2-year 3-month chart in the CRASH TARGETS update posted early on Friday. We saw this happening and ditched all our Puts for a good profit, especially our oil Puts which we sold right at the bottom. What should we now expect? Given that the market was the most overbought in history following what amounted to a parabolic ramp into a blowoff top, and that it was largely driven by speculative fantasy, a brutal bearmarket is to be expected that will erase 30% - 50% of its value. However, a market never normally goes into complete collapse from way above a 200-day moving average; usually a drop like this into a rising 200-day moving average is followed by a significant relief rally that allows this average to climb even higher and then roll over – this permits the rotation of more stock from stronger to weaker hands. Thus we should be aware that the market could retrace perhaps 50% of the plunge, which would take it back to the 2725 area, although when the time comes we will be flexible in deciding when it’s done. After that it should roll over and drop hard again. So our battle plan is to wait on that and then short it again if the time looks right (or buy inverse ETFs. 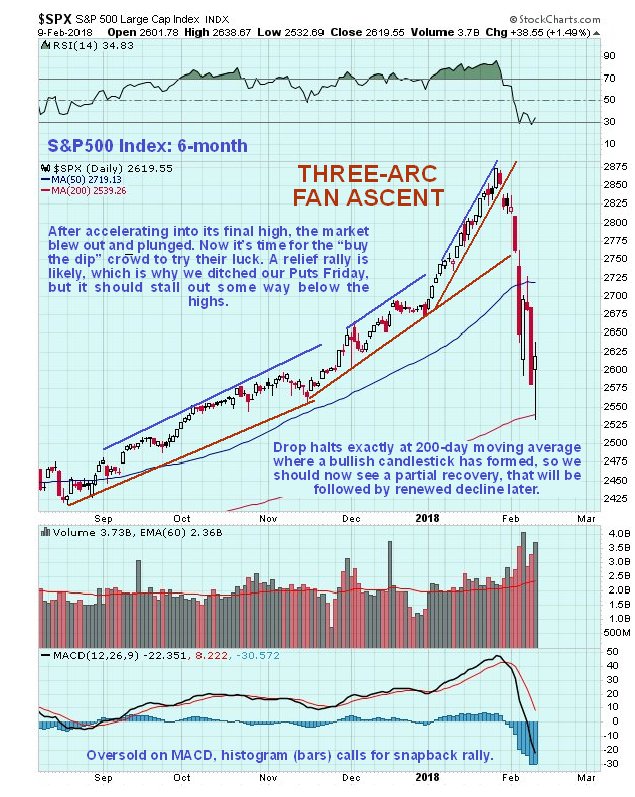 The latest chart showing Smart and Dumb Money confidence is actually funny, as it shows the little guy “foaming at the mouth” bullish going into the top, and then legging it for the hills late last week, when, it is most interesting to observe, Smart Money quickly became bullish. This provides important evidence that our assertion that the broad market is set for a significant bounce is indeed correct, and we may even need to raise our target for this move. Gold and silver stocks will advance at the same time. 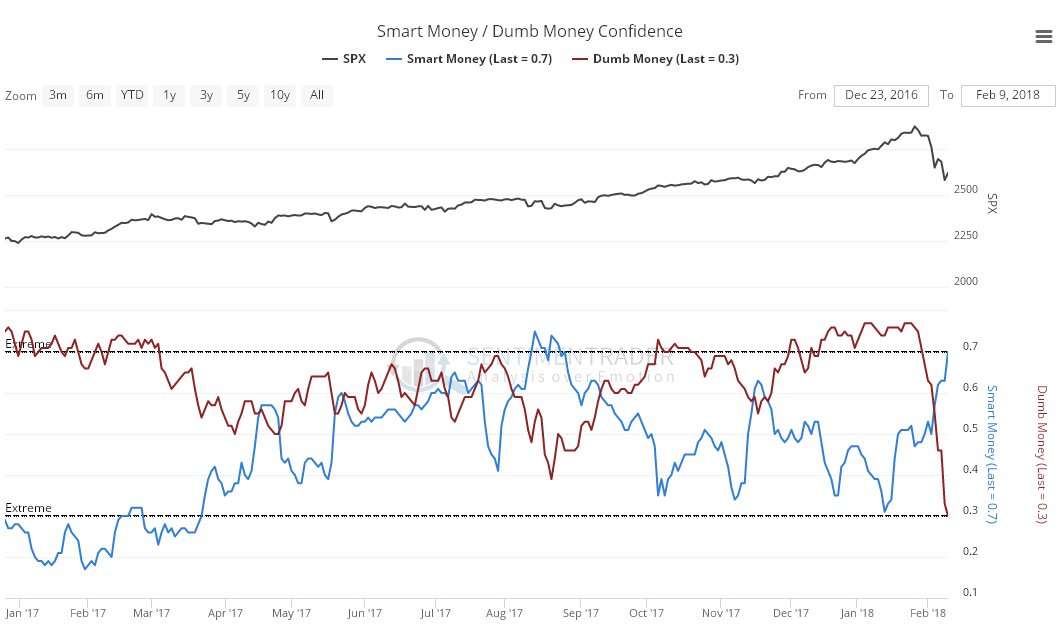 Click on chart to popup a larger, clearer version. Chart courtesy of sentimentrader.com
End of update.
Posted at 10.20 am EST on 11th February 18.