Reminder that THE DOLLAR HAS BROKEN DOWN FROM A GIANT TOP & LOOKS SET TO HEAD LOWER AGAIN...

THE DOLLAR & INFLATION...
Friday, July 23, 2021
THE DOLLAR INDEX BREAKOUT FROM A GIGANTIC 6-ARC FAN...
Saturday, April 04, 2020
The next BIG move in the Dollar...
Monday, March 30, 2020
The purpose of this update is to try to make sure that you remain aware that the dollar has broken down from a giant top area, and is probably headed much lower, a prospect which is not diminished by the modest countertrend rally of the past week or so. We can see this top area and the breakdown last month to advantage on the latest 4-year chart for the dollar index below. With respect to the dollar, Peter Schiff’s latest comments on it in Raising Rates Reflect Bigger Debt Not Faster Growth are well worth reading. Basically these people expect to “have their cake and eat it” and have gotten away with this up to now – rising bondmarket, rising stockmarket, rates low and stable, thanks to allowing uncontrolled expansion of debt and derivatives, but basically they are out of time, which is what the drop in bondmarkets and consequent plunge in the stockmarket is signaling. 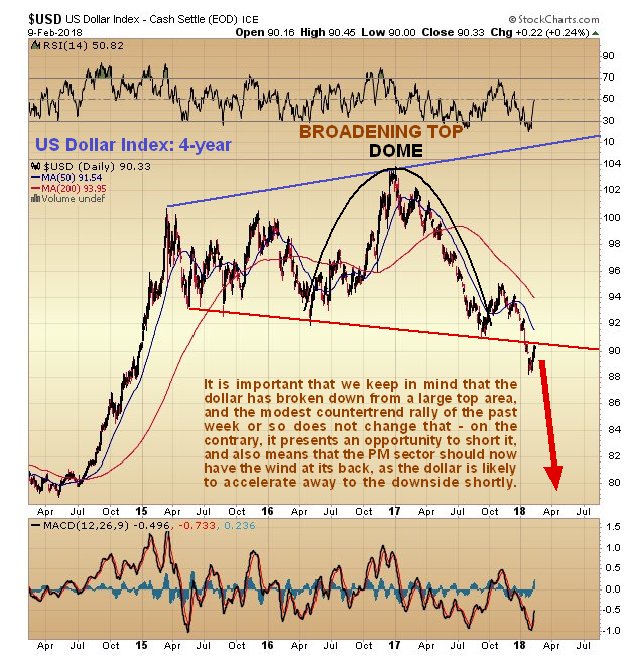 The dollar’s modest post breakdown rally to the underside of its Broadening Top is a typical post breakdown occurrence, and only increases downside risk by unwinding the earlier oversold condition. With its moving averages in severely bearish alignment it looks set to drop away very soon, and the decline could become precipitous. The reason for this is that a continuation of the current course, where the Fed engages in QT (Quantitative Tightening) and also raises interest rates will quickly implode the debt-wracked economy, so they are likely to abandon the proposed rates rises, unless their intention is actually to crash the markets in order that the Deep State can pin the blame on Trump. Once they abandon the rate rises, the dollar is toast. On the 6-month chart for the dollar index we see how the dollar rally of the past week or so has unwound the earlier oversold condition and brought it up to the resistance at two trendlines, one being the upper boundary of its recent steep downtrend, and the other being the lower boundary of the Broadening Top shown on the 4-year chart. This is a very good point for it to turn lower again. 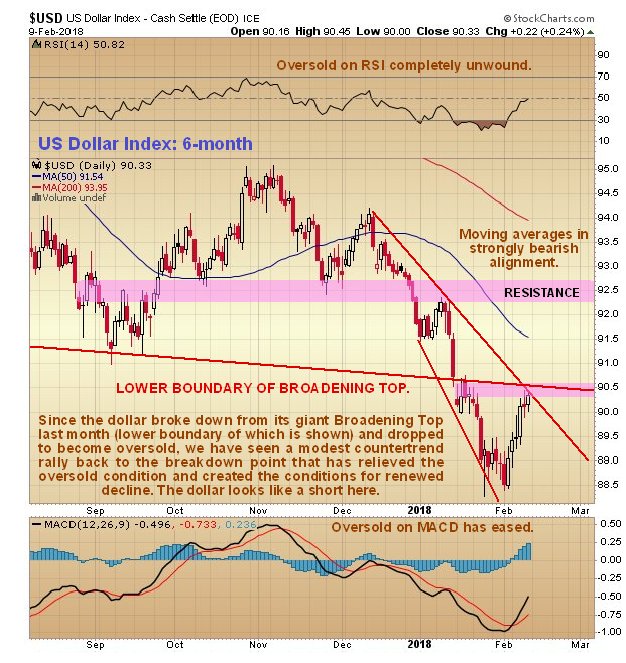 To conclude, this looks like an excellent point to short the dollar, which is expected to drop and probably accelerate away to the downside. This should provide a boost for the Precious Metals sector which should not be troubled by a falling stockmarket over the short to medium-term, and even when the stockmarket does fall again, it should have less or no impact on the Precious Metals sector, which will increasingly be seen as a safe haven. End of update.
Posted at 1.15 pm EST on 11th February 18.