US STOCKMARKET update - THE CALM BEFORE THE STORM...

US STOCKMARKET update ahead of election - the 3 possible scenarios...
Monday, November 02, 2020
IT'S THE END OF THE WORLD AS WE KNOW IT...
Monday, March 16, 2020
US STOCKMARKETS BIG PICTURE OVERVIEW AS THEY REACH INSANE OVERSOLD EXTREMES...
Wednesday, March 11, 2020
With the market moving against our short positions a couple of days ago after moving in our favor, many of you are doubtless wondering if our bearish stance is still valid, and also at what point market action would warrant closing out our shorts (bear ETFs, Puts). This update intends to address this issue. When we examine the latest 3-month chart for the S&P500 index, we find that the index is spiraling in to a state of temporary calm within a Symmetrical Triangle that could be either a top or a consolidation pattern. Fundamentally this reflects the tug of war between the bullish influence of the tax cuts, and the bearish influence of the imbecilic tariffs (amongst other factors of course). Because of what came before this Triangle, we have bet on its breaking to the downside, and that is still the expectation. So at this point there is no reason for us to close out our shorts (bear ETFs, Puts). If it does break down from the Triangle, the state of balance will be over and a violent decline is likely to ensue. If it breaks out upside from the Triangle, considered less likely, then the market can be expected to challenge its January highs. Therefore, if it breaks out upside from the Triangle, all bear positions should be closed out immediately. 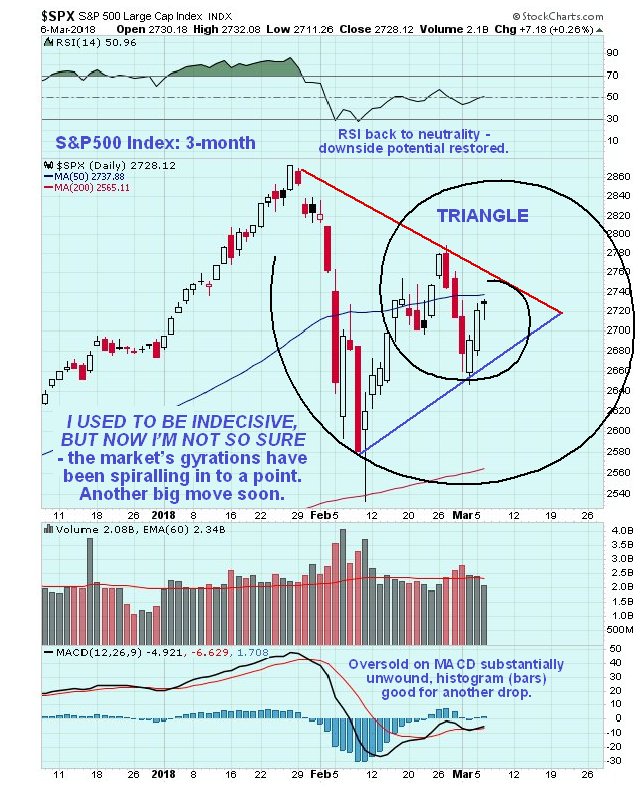 It is worth reminding ourselves on the 1-year chart why an upside breakout by the market leading to new highs is viewed as highly unlikely. The current Triangle, which reflects the state of indecision, was preceded by a parabolic blowoff top, and it is almost unheard of for such a blowoff move to be followed soon after by new highs. The current Triangle is thus viewed as a continuation pattern that will be followed by renewed decline, and probably another steep drop.