JP Morgan Equity Premium Income ETF - BIG FOR INCOME, WITH CAPITAL GAINS THROWN IN...
Wednesday, August 10, 2022
Repost of PRACTICAL MARKET CRASH STRATEGIES with CRASH TRIGGER LEVELS...
Monday, May 09, 2022
PRACTICAL MARKET CRASH STRATEGIES...
Sunday, May 01, 2022
Once a bullmarket ends and it gradually morphs into a bearmarket, you have to reorient your thinking if you want to stay on the right side of things. You have to reorient your thinking by 180 degrees to be precise, so that instead of the standard view that up is good and down is bad, your mindset is that up is bad and down is good. It is important to realize that in this new environment being long stocks generally speaking is foolhardy and dangerous, whereas being short via straight shorting of stocks or the purchase of inverse ETFs, is actually prudent and relatively much safer. In this revised state of mind if you go to a party and someone starts moaning about the stockmarket dropping, you exclaim “Did it? – great! – pass me another drink!” Despite two plunges this year, the stockmarket is still in a topping out process, and the top pattern that is forming, which approximates to a Double Top in the Dow, will not be complete until major US indices drop beneath the support near to their February – April lows – this is why bear ETFs have not really got moving yet – when that happens all hell will break loose. That said we have seen serious deterioration in the underpinnings of the market in recent weeks, as it has lost the leadership of the FAANGS, which are crumbling, notably Apple, and the Fed has made it plain that is not interested in averting a crash by desisting from its rate rises, at least that is, until it gets it backside kicked hard enough once it has crashed, and you may have noticed that Trump has already pinned the blame on the Fed in advance. Before getting into the subject of this update, the inverse ETFs, we’ll take a quick updated look at the chart for the S&P500 index and a closer look at the NASDAQ charts, which are topical because Tech stocks played a bit part in driving the market up to its final highs. The 1-year chart for the S&P500 index is optimal as it shows both of this year’s plunges. The 1st of these back in late January – early February was a “shot across the bows” – it was too early for the market to crash, it wanted to mark out a top area first, to allow time for the fundamentals to deteriorate sufficiently and to allow Smart Money to offload its holdings onto Dumb Money, as usual. We thus saw the market rise deceptively to a new high in August – September, which looks like a Double Top with the January highs, especially on the Dow chart, and also turned out to be an A-B-C slam very similar to the one we saw on the silver chart back in 2011. After completion of the C-wave of the slam, the bearmarket proper ensues, and as mentioned above, in this case, the real fireworks on the downside look set to start one the market breaks below its February – April lows. 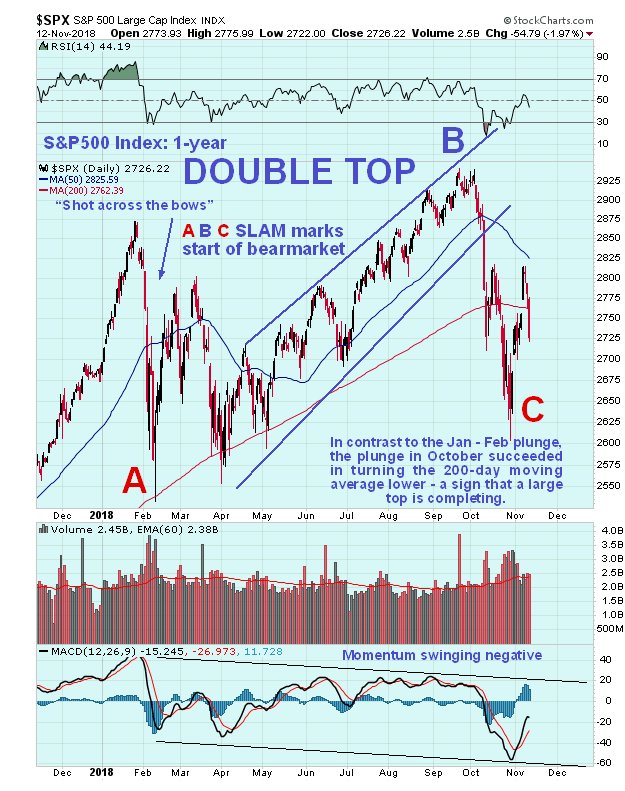 Turning now to the charts for the NASDAQ Comp, we see on the 1-year chart that it has bounced above quite strong support at its February – April lows, from the trendline shown. After perhaps moving sideways for a while it is expected to crash this support and head lower… 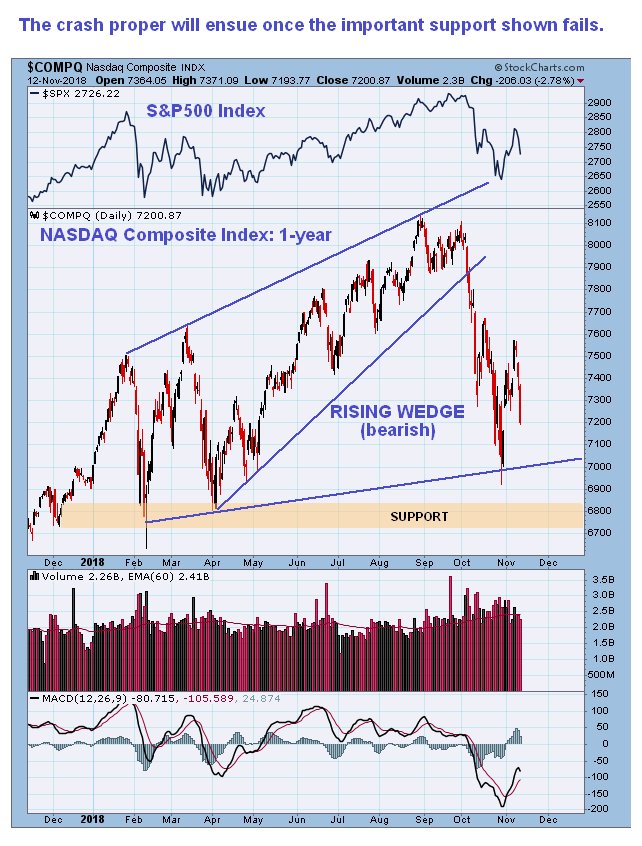 On its long-term 14-year chart we see that, despite its recent plunge, the NASDAQ has not yet broken down from its long-term uptrend channel, which has taken the form of a bearish Rising Wedge, and although some have talked about it “crashing” in the recent past, it is still less than a thousand points from its highs, so they are exaggerating – the real crash will come when it breaks down from this channel, and it could be spectacular… 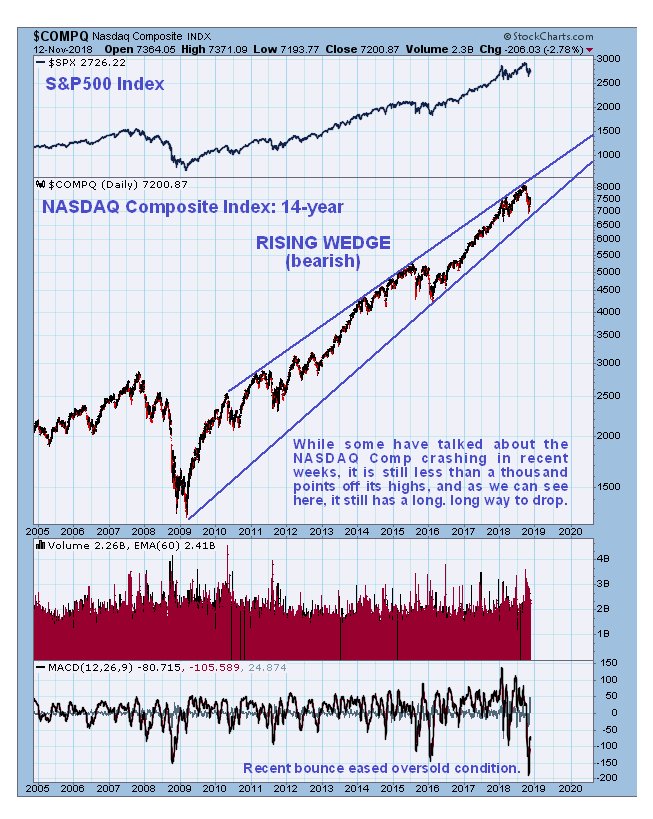 Note that this article is actually a rework of a similar one posted on the site in July, entitled INVERSE ETFs for the 2nd Downwave – Part 2 - LEVERAGED. After the latest market plunge prices are mostly little changed since then, and it is considered to be more applicable now because we are closer to the most destructive phase of this nascent bearmarket. Now we will proceed to look at a range of twice leveraged inverse ETFs for the broad market and the NASDAQ. Twice leveraged ones are regarded as optimal for our purposes. Unleveraged ones are rather too staid and boring for us, as they will not provide sufficient returns, although if capital preservation is your primary aim, then they will serve this purpose if the market drops as expected. Twice leveraged ETFs provide the leverage to result in good gains, without the much higher risk that comes with the thrice leveraged variety, that tend to be heavily juiced with options and can move against you severely if the market doesn’t behave as expected. For the benefit of more sporting subscribers we may look at a couple of them going forward, if it looks like the market is right on the verge of a plunge. Note that a couple of inverse ETFs traded on the Toronto exchange are included for the benefit of Canadian subscribers. It is important not to be put off by the horribly bearish look of the long-term charts of these inverse ETFs – remember that until this year the market had been rising for 9-years almost without a pause, powered by the extreme anomaly of low rates and stocks buybacks, both of which are on the way out, and the market has already signaled that it is reversing into a major bearmarket, as we observed above.
ProShares Ultrashort Dow 30 DXD $31.88 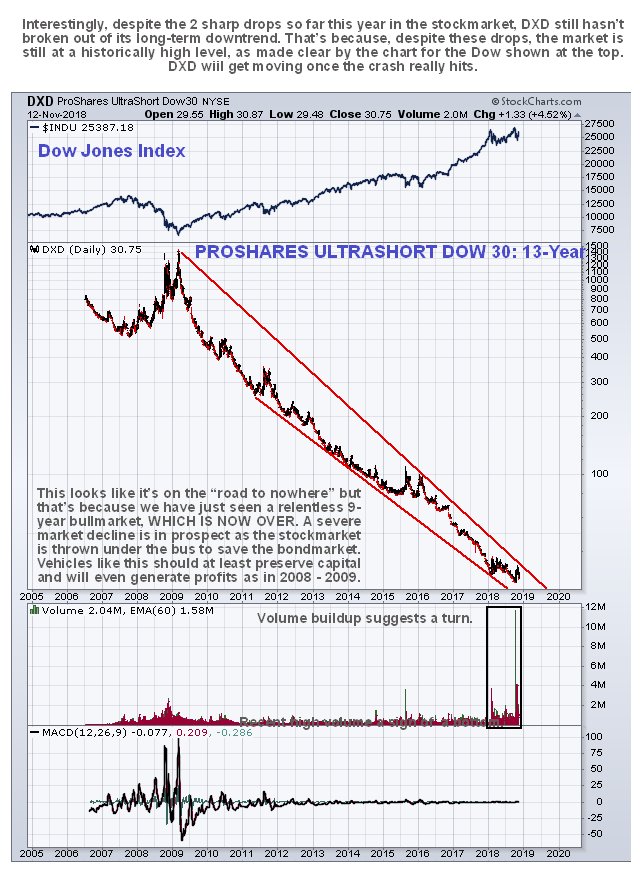 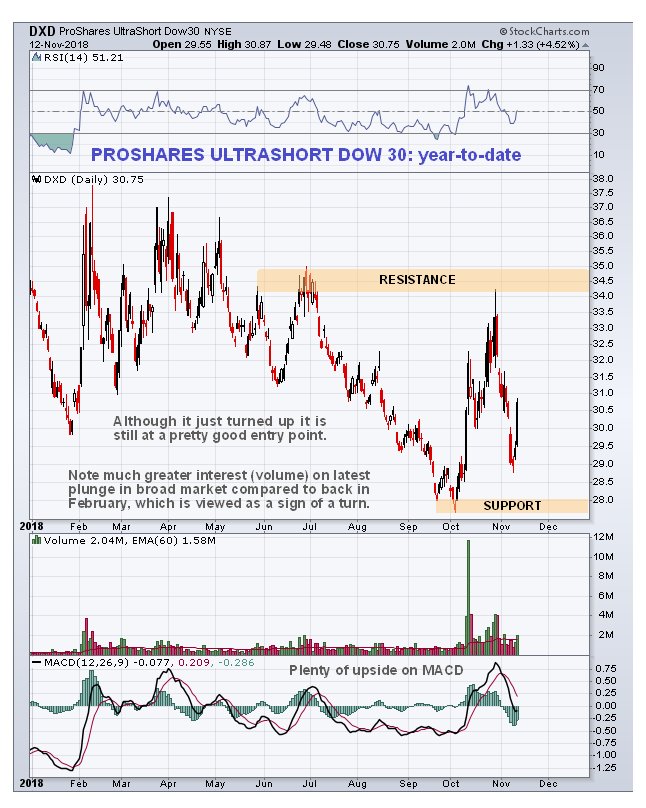 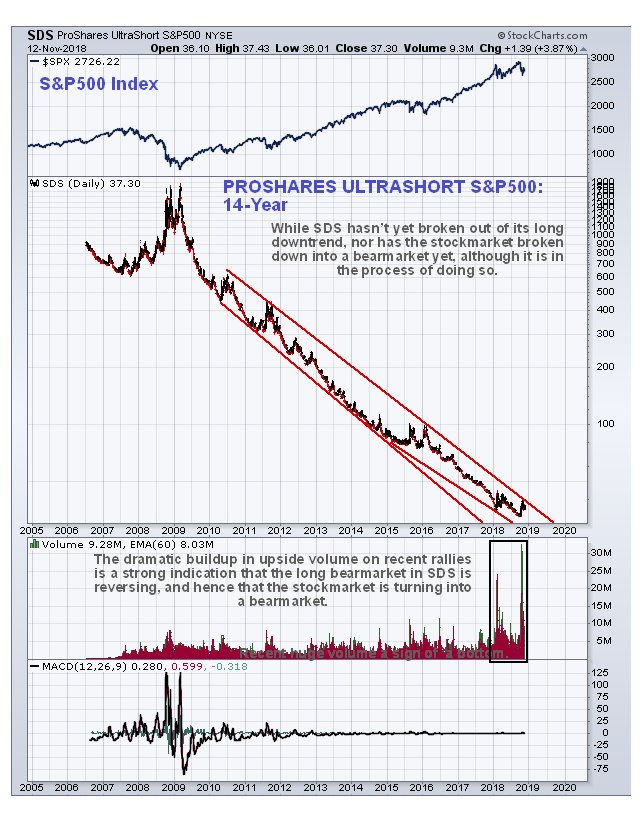 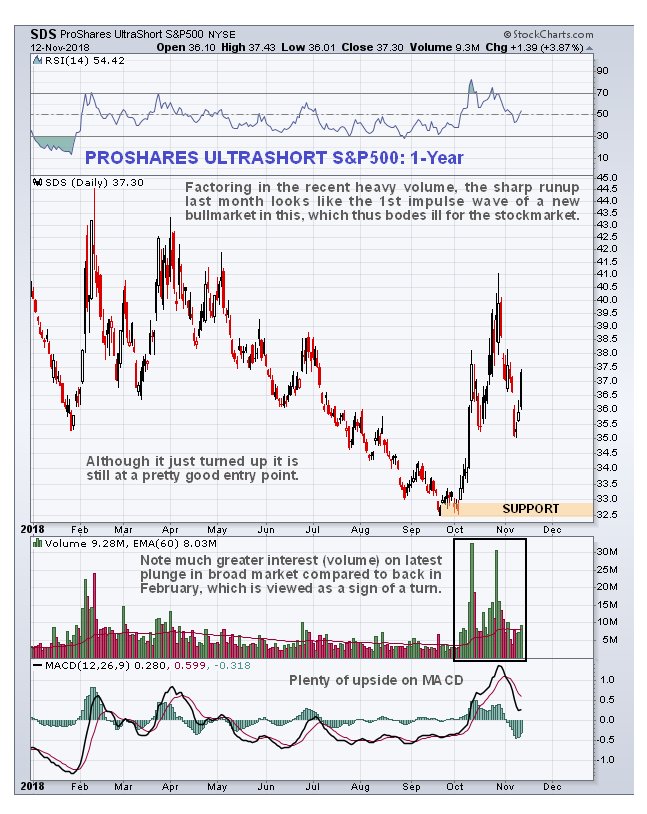 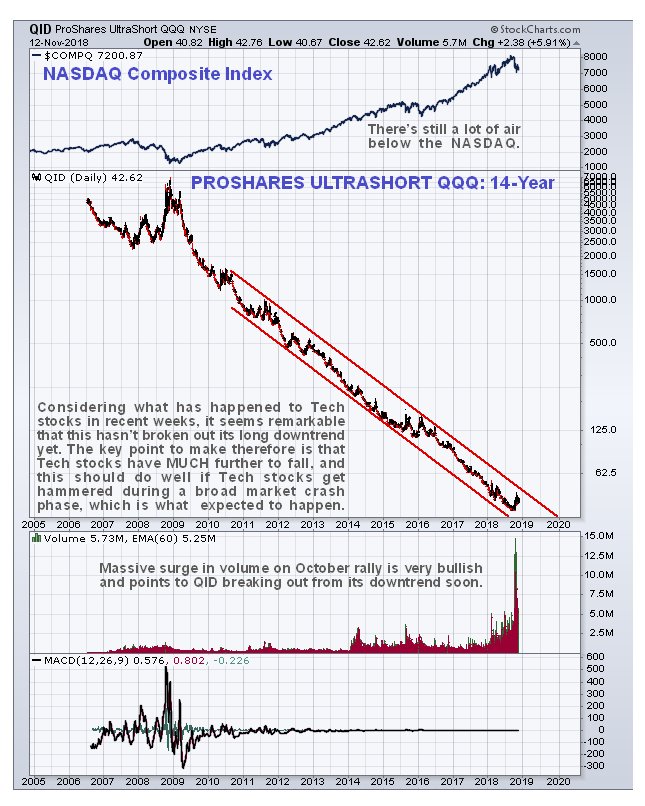 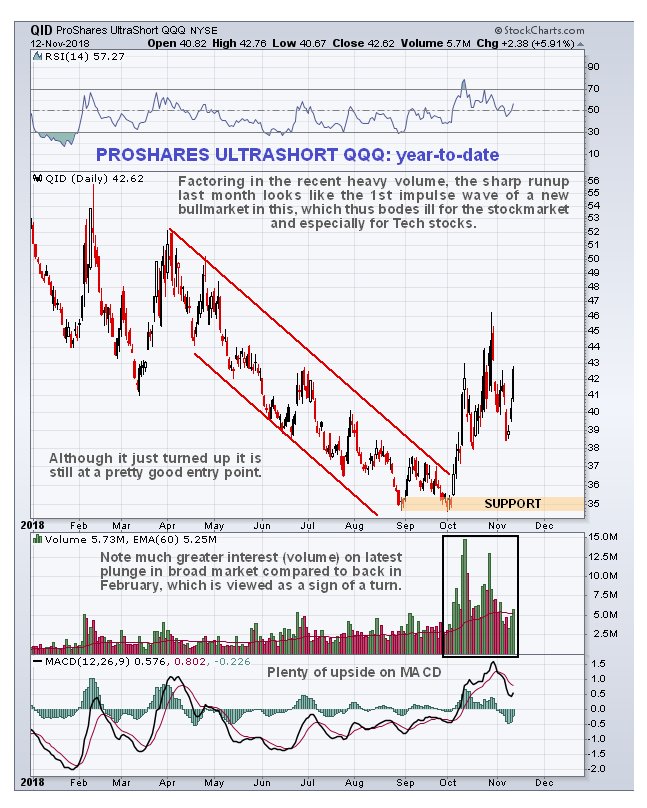 The following 2 twice inverse ETFs are traded on the Toronto exchange and thus may be utilized by Canadian subscribers… Horizons BetaPro S&P500 Index Bear Plus ETF HSD.TSX, $3.92 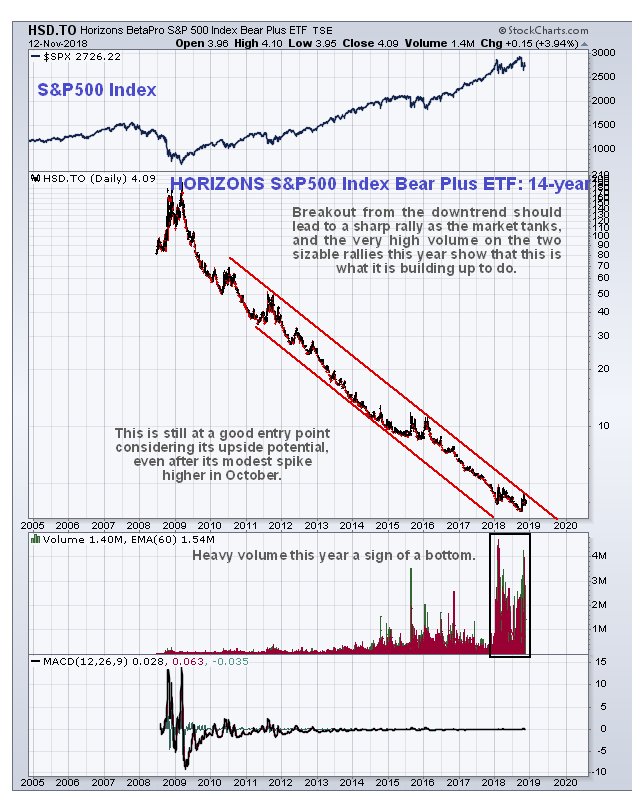 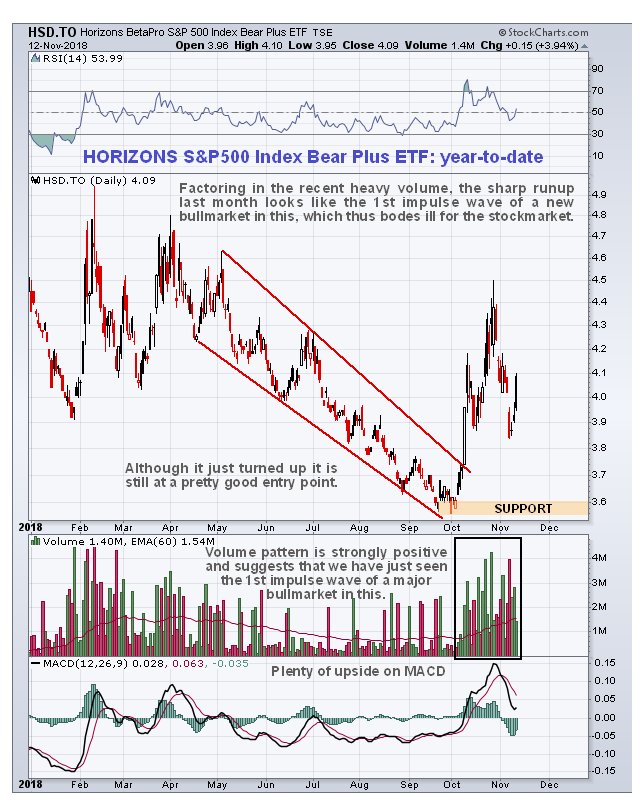 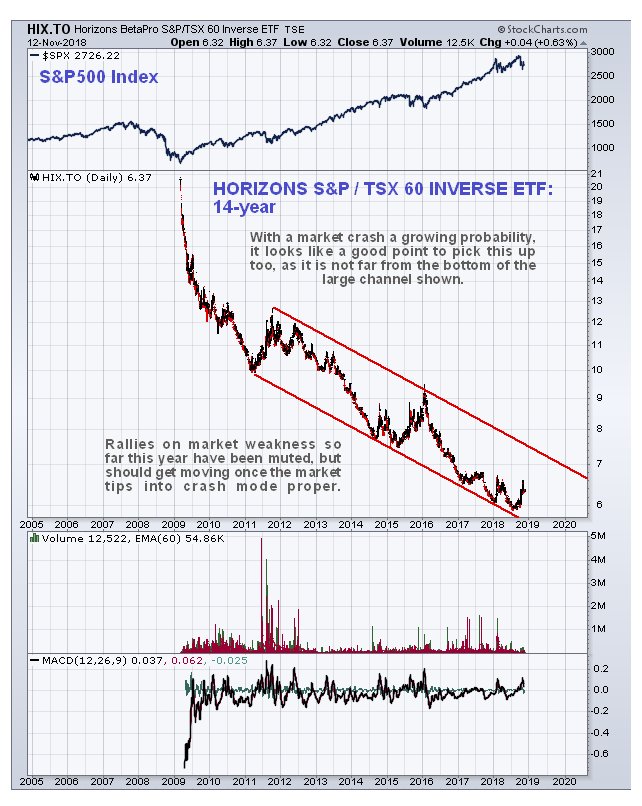 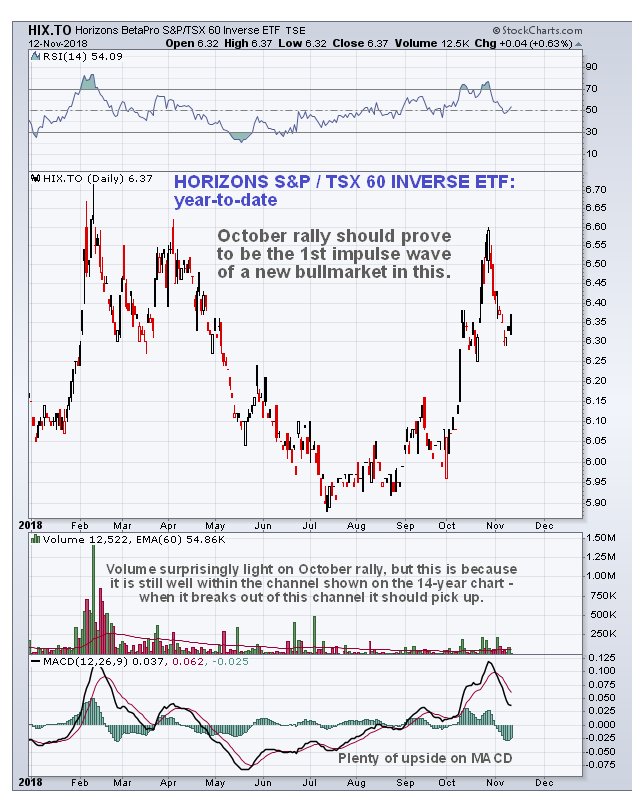 End of report. Note that this article will be filed under ETFs in the Archive.
Posted at 10.35 am EST on 13th November 18. All prices for close of trading on 12th November.