BROAD US STOCKMARKET update...
Monday, April 27, 2020
CRASH UPDATE - including DOWNSIDE TARGETS for the DJIA and S&P500 indices...
Wednesday, February 26, 2020
BLOODBATH LOOKS IMMINENT - FULL DEFENSIVE MODE...
Sunday, June 02, 2019
The market is now in position to crash. This is not something that will arrive as “a bolt out of the blue” – it has been setting up to do this for a long time. On the 6-month chart for the Dow Jones Industrials below we can see that on Friday it broke down from a Head-and-Shoulders top that had been forming since February, and the longer-term 5-year chart for the S&P500 index lower down the page makes clear that a giant top started to form with the January 2018 peak, which means that it has been setting up for a bearmarket for fully 16 months now. 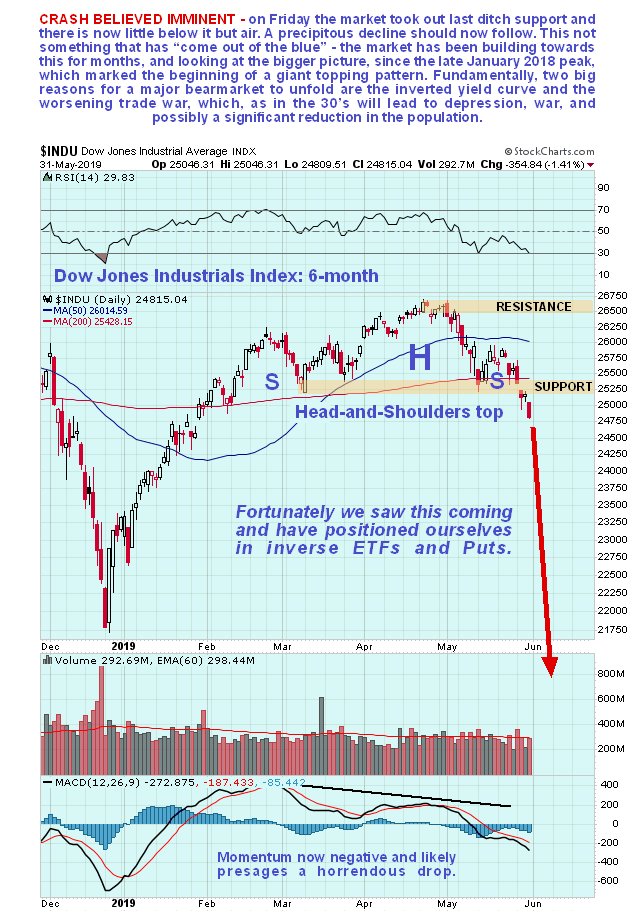 A few weeks back we had spotted the H&S top forming but we weren’t sure whether a symmetrical Right Shoulder to complete the pattern would develop, which would have it holding up for perhaps another month, but by last week it had become clear that it would likely settle for a shorter stunted Right Shoulder, which is why we decided to “put our best foot forward” and go for both inverse ETFs, and selected Puts. In the event this is what happened and the breakdown on Friday beneath “last ditch” support means that it is likely to crash next week. What very often happens when markets crash is that key support is breached on a Friday, after which traders have the weekend to brood about it and many decide to hit the sell button the following Monday, and a near tsunami of sell orders hits the market at once forcing a steep self-feeding decline. That is what looks set to happen this Monday. 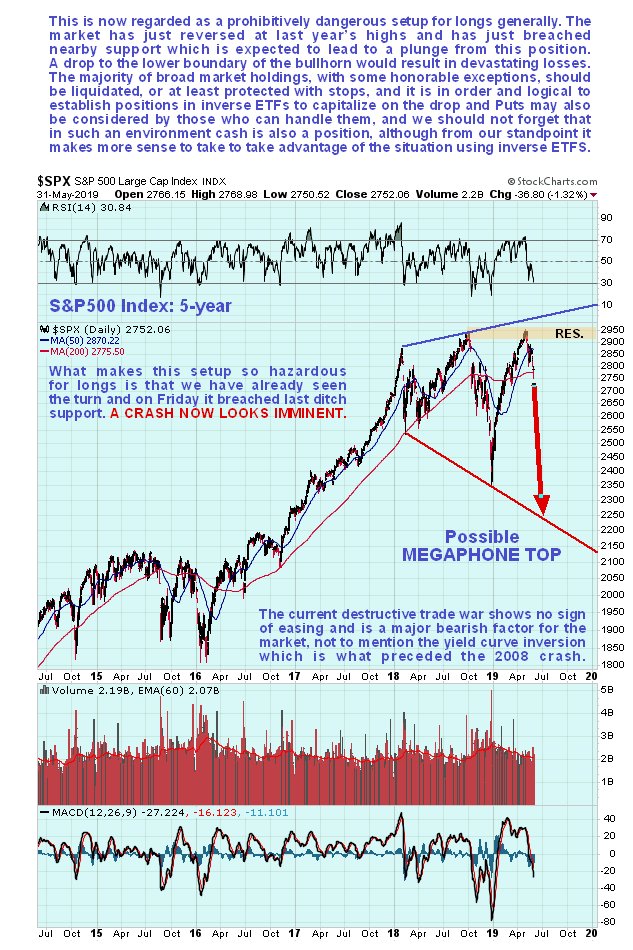 Last week Wall St and the MSM were singing the praises of strong earnings to be reported in coming weeks, and suggesting that this would buoy the market, but unfortunately the market looks a lot further ahead than that, typically up to 9 months ahead, and it has discerned nasty storm clouds on the horizon, presaged by the inverted yield curve and partly resulting from fallout from the trade war. The Neocons, being adversarial by nature, view both Russia and now China as enemies, because they stand in the way of global hegemony, and since they cannot defeat them militarily are attacking them economically. Unfortunately however, trade is a two way street and the attempt to inflict damage on your trading partners is going to drag you and everyone else down too. This is why what is going on now is very similar to what went down in the 1930’s with protectionism, trade wars and then depression leading to a major war, and we have the perfect flashpoint for a major war in the form of Iran, which China and Russia cannot afford to see taken down, because if it is, the balance of power will shift and they will be next. The Neocons (and Israel) have a sense of urgency about attacking Iran, because they know they have a limited time window to do it. This is because China is set to grow much faster than the US, and the other major powers are moving to de-dollarize, knowing that if they succeed the dollar will crash, and the debt-wracked US economy will implode, which will make it impossible to fund the US military-industrial complex at current levels and the vast global US military machine whose mission is to impose the US’ will on the rest of the world. The impending crash will be much more severe and have much more serious consequences than any hitherto, because of the catastrophic debt overhang that has built up. In this situation gold will become the best investment because it has an intrinsic value that cannot be eliminated. We had surmised before Friday that gold would probably be taken down near-term during the crash phase because of a dash into cash driving a temporary spike in the dollar, but on Friday at least that didn’t happen and instead the Precious Metals sector showed strength, suggesting that the dollar may already be in trouble for the reasons mentioned above. This may just have been a “pop” on the part of the PM sector, which could yet turn and drop with the market. We will have to wait and see what happens next week – if the broad market drops hard and the PM sector advances it will mean that it has already acquired safe haven status, and in general it will be safe to buy the sector with stops beneath recent lows. To conclude, a devastating crash looks imminent and full defensive mode is the order of the day. End of update.
Posted at 11.45 am EDT on 2nd June 19.