COEUR - that looks good!!...
Thursday, October 14, 2021
TANZANIAN GOLD - it's been a long road, but THIS COULD BE THE OPTIMUM BUY SPOT...
Wednesday, October 13, 2021
SILVER JUNIOR AT GOOD ENTRY POINT...
Monday, October 11, 2021
While many have been talking about the Precious Metals sector correcting back significantly in the recent past, no doubt due to having been programmed by past disappointments, we have “put our best foot forward” and gone ahead and bought various ETFs and stocks across the sector, in the belief that, due to a major new sector bullmarket starting, any reaction would be limited. There are a lot of investors and traders who missed that big move and are waiting for an opportunity to buy if it corrects back enough, and as the bull likes to go up with as few investors on board as possible, this means it probably won’t react back enough for them before it storms higher again. We have reserved judgement to some extent on how deep the current reaction would be, and bought with the view that the potential magnitude of the next upleg is far greater than any short-term downside risk. It is thus gratifying to observe this evening that the sector appears to have just about completed a bull Flag / Pennant and to be ready for another upleg, which should be big. We can see all this on the latest 6-month chart for the Market Vectors Gold Miners ETF GDX which looks very bullish indeed. The first thing to observe is that the high-volume breakaway gap in the middle of June was a strong sign that something big was starting. Next we see that the bull Pennant that has since formed has been accompanied by a bullish volume dieback and the Accumulation line continuing to drive higher, which is a sure sign that another sizeable upleg is incubating. While we cannot rule out another minor short-term dip within the pattern, which wouldn’t much matter, it now looks about ready to break higher. 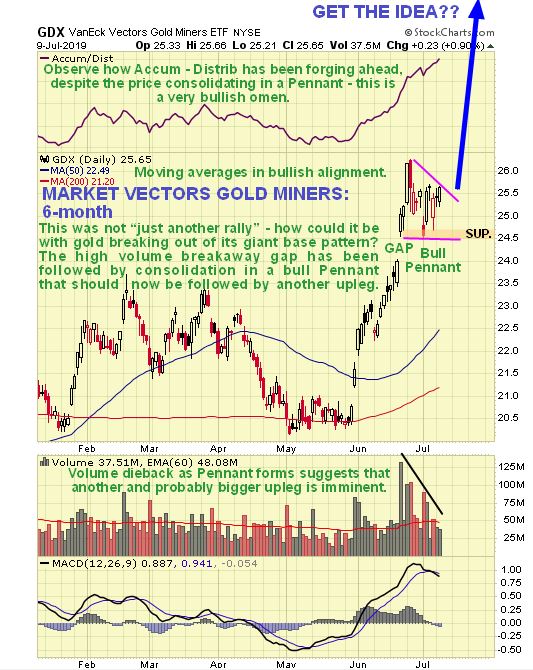 Additional confirmation of our bullish conclusions about the sector is provided by the charts of many stocks, and we will take a look at a couple of very positive silver charts. You will recall that we lighted on to Coeur Mining as a really big mover capable of delivering massive gains quickly some weeks back. Since then, as we can see on its latest 6-month chart, it has proceeded to mark out a particularly fine, tight bull Flag, and interestingly, this has formed right beneath the resistance at its falling but now flattening 200-day moving average, which had the effect of restraining the last upleg – but there will be no such restraint limiting the next upleg, which we can expect to be big and to lead to a bullish cross of the moving averages. So we stay long and Coeur is again a strong buy here. 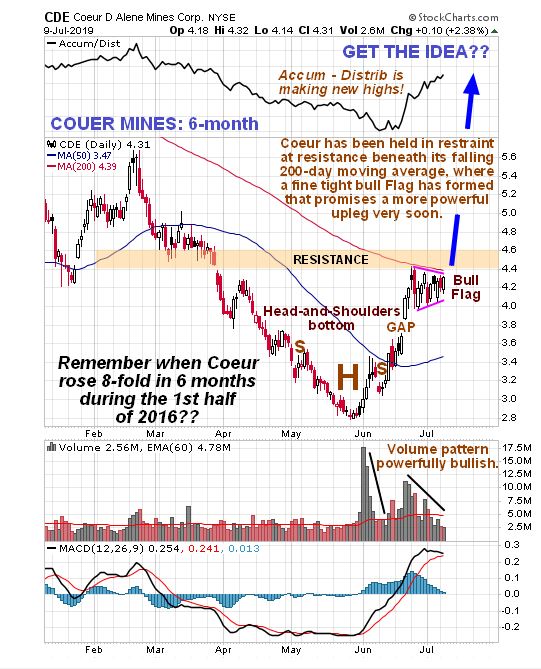 It’s a similar situation with to Hecla Mining, where buyers now have the added advantage that the reaction of the past couple of weeks back to the breakout point at the upper boundary of the small Head-and-Shoulders bottom means that it can be picked up at a very good price. So again, we stay long and this is a very good point to make fresh purchases. 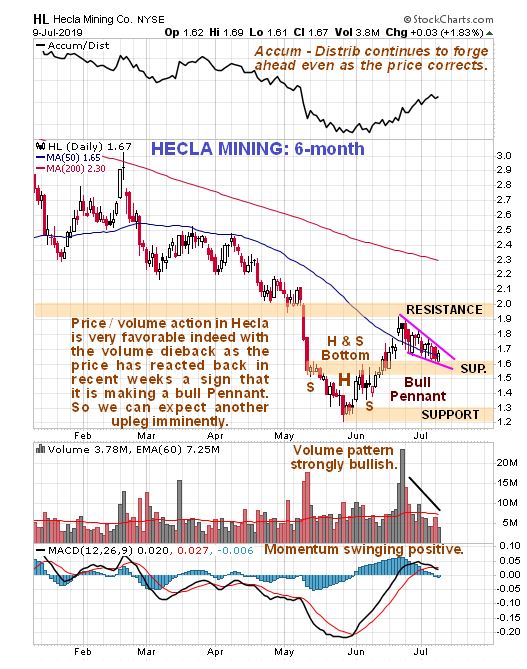 This is an excellent juncture to mention that we have again have very good entry points here for the twice leveraged to ProShares Ultra Silver ETF AGQ and the triple leveraged to VelocityShares 3X Leveraged Silver ETN USLV which is more suited to aggressive speculators as it more risky. In you are in the mood for a PM stocks shopping trip, this is certainly the time for it. Amongst the many other stocks that are buys here that we haven’t already looked at, honorable mention must go to Agnico Eagle Mines AEM which is completing a nice bull Flag and whose Accumulation line is soaring, to Gold Fields GFI whose Accumulation line is soaring, to Newmont Mining NEM which is looking very perky with a tight upsloping bull Flag completing with a bullish volume dieback, ditto Yamana Gold AUY which is working on a zone of resistance that it is about to take out. End of update. Note that some more stocks may be added to those listed here, probably tomorrow.
Posted at 9.00 pm EDT on 9th July 19.