EFFECT OF QE4 ON THE STOCKMARKET AND GOLD... 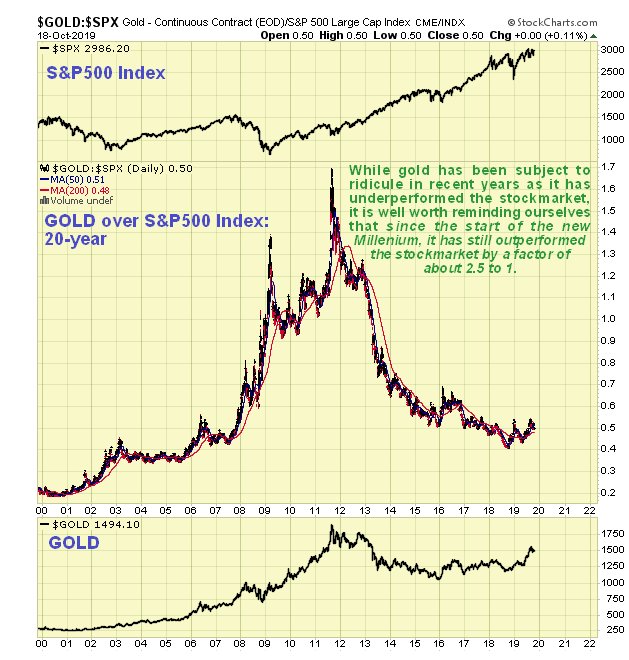 On the following 20-year chart for the S&P500 index, we see that it tried to go into a normal, cyclical bearmarket when a potential top formed from 2014 – 2016, but this would be bearmarket was averted by the Fed intervening with another big dose of QE, that drove the stockmarket higher again, largely as a result of stock buybacks made possible not just by Fed largesse but by extremely low interest rates as well… 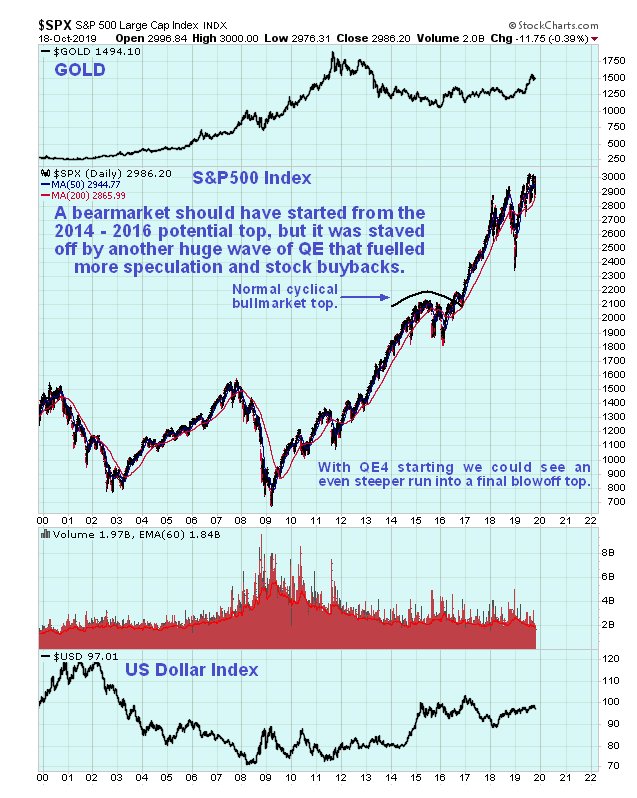 Given what the Fed has been doing to the money supply in recent years, it is remarkable that the dollar has held up as well as it has, but that is only because, taking a leaf out of the Fed’s copybook, other countries and trading blocs like the European Union, as been subjecting their currencies to even more abuse. Nevertheless, the pattern forming in the dollar does not look positive. It is suspected that a giant Broadening Top is completing in the dollar index, and it appears to be struggling beneath the resistance level shown on our 20-year chart for the index… 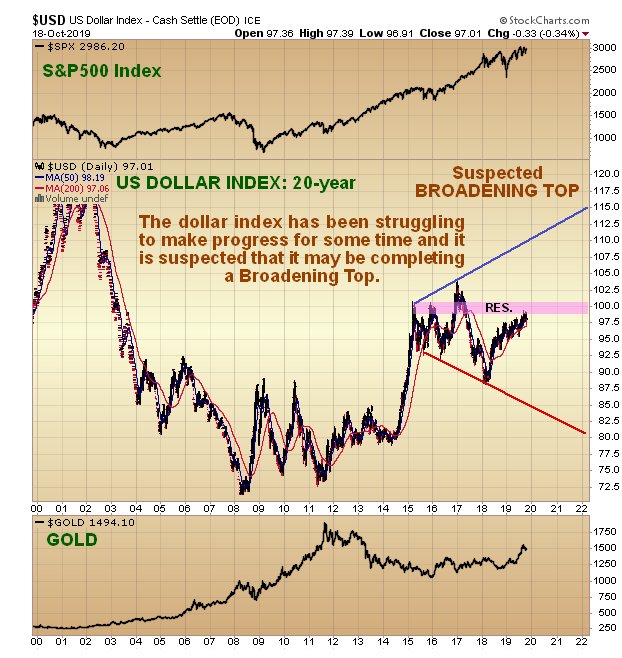 On the 2-year chart for the dollar index we can see that the slow, ponderous uptrend has continued for over a year, making it more likely that a reversal to the downside will occur soon. However, this channel is at least parallel, so it would be wise not to bank on it breaking down until it does. Watch what happens when it arrives at the lower boundary of this channel. A point worth making here is that, even though the dollar has dropped back quite steeply in recent days, gold has barely picked up. This is thought to be because the dollar and gold are now perceived as safe havens, and if QE4 promotes a risk on environment again as looks likely, they will be safe havens that are not in demand for a while. 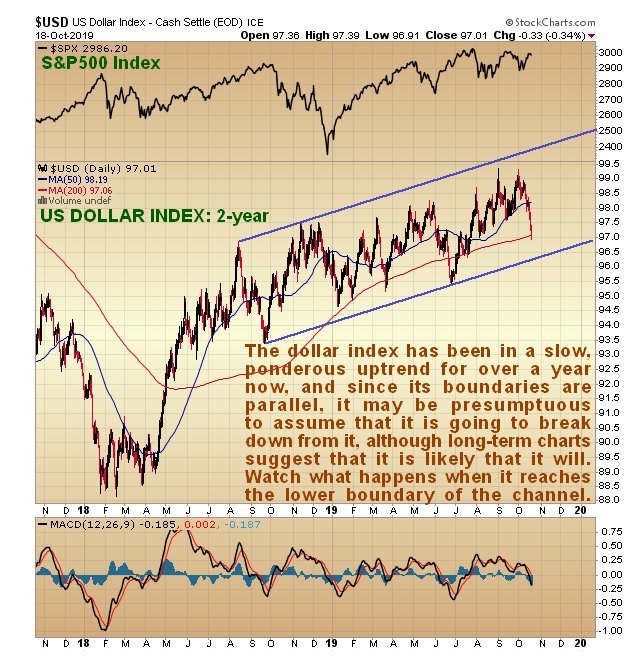 Does the advent of QE4 mean that a market crash has been forestalled? Probably, but not necessarily. The ballooning of debt and derivatives has of course created a situation which is dangerously unstable, one in which the complete collapse of a key company like Deutsche Bank, which has a gargantuan derivative book, could implode the system, so clearly the way to avoid a meltdown is to firefight any such situation the moment it presents a problem – this is what happened in the repo market a few weeks back when it locked up threatening a liquidity crisis, an event which is thought to have brought about the early launch of QE4, that has not been labeled as such as they are trying to keep it low key. An important point to make here is that for the elites it presumably makes more sense for the markets to crash during the Fall of next year rather than this year. The reason is that a crash before the Presidential election would inflict the maximum damage on Trump, who has made a buoyant stockmarket a major plank of his Presidency. So, if they go at it pumping money again with QE4, they could keep the stockmarket elevated provided that they are able to firefight any liquidity issues arising from the increasingly extreme instability. If not and things get out of control, markets will crash anyway. Action late last week suggests that, for a while at least, we are going back to risk on mode, which could see the stockmarket make new highs and safe haven assets, which both the dollar and gold are now, drop back, and we see that both the dollar and gold dropped back late last week. Gold’s chart has been weakening with a potential intermediate top forming and its latest COTs are by normal standards bearish, with the Commercials now holdings heavy short positions, which usually means trouble. Any significant reaction from here will be viewed as presenting a great opportunity to build positions across the sector, because QE4 will eventually cut the legs from under the dollar, leading to hyperinflation.
Posted at 5.20 pm EDT on 13th October 19. Charts with accompanying text added on 19th October.