ECOLOMONDO CORP update...
Monday, September 26, 2022
WHY THOSE IN POWER HAVE AN INTEREST IN CRASHING THE MARKETS NOW...
Sunday, September 25, 2022
BLACK MONDAY ALERT - BATTLE STATIONS...
Friday, September 23, 2022
During the past year the world has fallen victim to what is by far the biggest criminal conspiracy of all time, meticulously planned with great ingenuity over many years, that has already devastated the lives of countless millions, and is set to destroy the lives of most people on the planet if not confronted and stopped. For its success this plot depends on the continued gullibility, passivity and insouciant stupidity of the masses. What the majority of people don’t realize is that by conforming with the dictates of those who they have chosen to see as their Masters this year, they will soon have sealed their fate, which will be either death or slavery. The world has now been taken over by a narrow clique of super wealthy individuals who have made it abundantly clear this year to anyone capable of critical thinking that they are of malicious intent – they control everything: governments, politicians, the bullied and bought off judiciary, major world institutions like the United Nations, World Health Organization etc., all large corporations including and especially the Tech giants, the media, the Military Industrial complex and of course Big Pharma. and their modus operandi is blackmail, bribery and deception, and if those don’t work, threats. We refer to them as the New World Order (NWO for short) because that is what they are intent on bringing about, which they euphemistically refer to as The Great Reset. The principal objectives of the NWO can be simply and succinctly stated. They are to kill off between 70 – 95% of the world’s population and to turn the survivors into a tightly controlled servant / slave class who will mainly live in high Tech urban ghettoes. The means by which they will eliminate most of the population, which have already been set in train, are principally mass starvation and vaccination, but may also include war, especially civil war. The goal is a 2-tier society split between a super wealthy elite and everyone else who will fall into what is termed “the precariat” class, very like in the film Elysium which is regarded as predictive in nature, apart from the fact that the survivors will be fewer in number than in this movie, the better to help the natural world regenerate. In addition to their role in greatly reducing the population, the vaccines will be used to turn the surviving slave class into compliant drones or androids. As Gary Barnett says in his article Death by Government Edicts and Vaccination is Planned Democide! “The vaccines that are being made available will contain several viruses, deadly toxic adjuvants including mercury and aluminum, RNA and possible DNA changing additives, tracking and tracing elements, biosensor technology, nanoparticle introduction, and could even cause sterility.” The slave class will eventually be hooked up 24 / 7 to a control grid which is the reason for the massive 5G rollout, and by means of implants introduced via the vaccines their moods and actions can be influenced and controlled and their thoughts read. Lest you think that this is “conspiracy theory” or in the realms of science fiction, you need to WAKE UP and educate yourself – go outside and look around at what is already happening. Have you ever wondered how they could roll out these vaccines so quickly in a matter of months, when normally it takes years to develop a vaccine? The answer to that is simple – they had the virus scamdemic planned for years, and so it is logical to assume that they had the vaccine developed way in advance as well. The “race for the vaccine” by different favored companies like Moderna and Pfizer is all theater for the stupid masses to make them think it is a spontaneous response to the unexpected pandemic. This being so it’s probably pretty much the same vaccine being produced by these different companies, in which case the hapless fools rolling up their sleeves to be vaccinated have been duped. If this is not the case and these vaccines were developed in just months it’s even worse because it means that they are UNTESTED AND DANGEROUS, which means that you have to be an idiot to voluntarily submit to being vaccinated. The picture below is funny, but the subject is not really a laughing matter, especially for the nurse in one of the videos below who was vaccinated a few weeks ago and is now paralyzed down the left side of her face with Bell's Palsy. The old fools they have been parading on the TV getting vaccinated and then giving a thumbs up as medical staff around them clap will have time to regret it later by themselves when the media will be long gone - if they are still around that is. 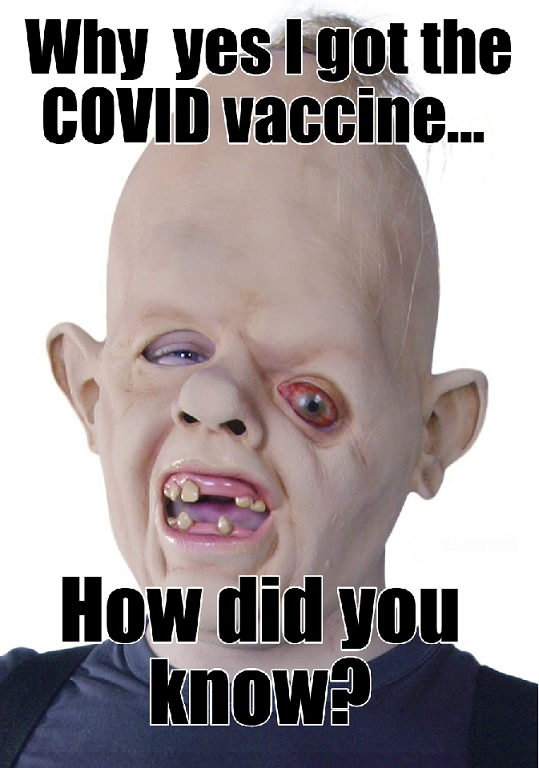 Of course, the majority of people would not take a rushed through vaccine that has not been properly tested although there is always a sizeable percentage of fools who will mindlessly do anything that “the authorities” tell them, so the means that have been employed to get people to take the vaccine are a combination of fear – fear of the phony scamdemic – and coercion – if you don’t take the vaccine you can’t do bank transactions, enter a business premises or store, fly etc. This allows them to say that the they didn’t make taking the vaccine mandatory, but as you will in effect be shut out of society if you don’t, many will inevitably gave in and accept it, not realizing how harmful it is. Right before the trumpeted vaccine rollout they have predictably ramped up the virus cases in a coordinated manner worldwide, using severely flawed and misleading testing procedures whose inaccuracy for the purpose of gross exaggeration is laid bare by Jon Rappoport in his numerous essays on the subject. The purpose of all this is to impose further lockdowns and to ramp up hysteria in the media and fear amongst the general public, and thus make people more disposed to take the vaccine, and a crucial point to keep in mind with this vaccination agenda is that once they have “got their foot in the door” by vaccinating you once, you will be required to have endless “booster shots” that could be a lot nastier than the early ones, which apart from anything else are set to net massive fortunes for those driving all this. Fortunately, or rather unfortunately, for the 50% or more of the population who believe the propaganda pumped out by governments and the mainstream media, they have no idea what is in these vaccines and couldn’t care less, but they could well have reason to severely regret their insouciance and plain stupidity in the future. There are 2 big reasons for the lockdowns. One is to destroy as many small businesses as possible and wipe out the middle and working class, so they become destitute and lose their independence. They then become dependent on what are now termed “stimulus checks” which will eventually become UGI or Universal Guaranteed Income, but in order to qualify for this support they will have to – you guessed it – be vaccinated. The other reason for destroying the livelihoods of the population at large is to drive them deep into debt, so that they are then at the mercy of the government, who will deliver them an ultimatum, as follows “You are deep in debt which you have an obligation to pay back, but you can’t, so we will forgive it in exchange for you turning over all your property to us.” Some of you may have already seen the WEF (World Economic Forum) poster showing a grinning young fool with the caption “You will own nothing, but be happy.” This is course begs the question “If you don’t own anything, then who does?” – why, of course, the gangsters who contrived the virus plot and destroyed your livelihood. This will be the most enormous heist in the history of the world by far as the super wealthy seize all of the world population’s property, who will become serfs dependent on the State for survival, those who are permitted to live, that is. The main purpose of this article, and my prior articles on this subject, is to pass on to you what I know, so that you can hopefully understand what all this is about and at least be psychologically prepared for what is fast approaching. I really don’t want to write about this, especially as I do so at some personal risk to myself, but feel I must pass on what I know, especially as time is so short. As you may recall I have written big essays on this in the past so I am keeping this is short as possible, and one of the main reasons for it is to bring to your attention some interesting and important videos I have come across in the recent past that you may like to read / see. The main point to make is that is that you should make every effort to avoid being vaccinated. This article contains a video, Doctors Around the World Issue Dire WARNING: DO NOT GET THE COVID VACCINE!! In the videos in this 2 doctors warn of the dire consequences for many Americans (and others) of taking it . Finally you may recall that Alex Jones, who has been smeared by the mainstream media and depicted as a fringe wing lunatic, was deplatformed by the NWO for obvious reasons several years back, but by that time he had built up such a following that he was able to keep going. Although he can be “over the top” he appears to be well focused and spot on in AMERICANS REJECT THE COVID-19 HOAX which makes clear that we are at a critical juncture right now, where the fate of the world is in the balance. Although I am currently enjoying the Chilean Summer, where I come from which is Britain, they have already entered a Dark Winter with heavy lockdowns. Britain is one of the more accomplished police states in the world. The video just linked raises a possibility that even I hadn't thought of, which is that they could pull the plug on the internet to stop any resistance in its tracks, since people would then only have the mainstream media, such as TV and radio to fall back on, which the NWO completely control

Finally, I must reluctantly admit that the Zionist’s assessment of most gentiles as “Goy Cattle” or “Goyim” or in other words gullible mindless idiots does appear to be correct, and you have only to go into any town center around the world and observe the masked fools trying to avoid human contact to see what they mean. Zionists make clear that they regard them either as expendable or exploitable as a servant class, and it is an interesting coincidence that’s exactly the way the New World Order regard them too.

If you don't want to fall in the grave already allocated to you in 2021, you are going to have to find a way to stop wearing masks, stop anti-social distancing, stop accepting Martial Law and home imprisonment and closing your business, stop washing your hands all the time, and most important of all REFUSE TO TAKE THE VACCINE, and it will be more effective and safer if you can organize to do this in as large groups as possible – even 3 or 4 people have much more chance of effecting change than one. If enough people resolve to stop doing these things they can be stopped. I am not under any illusion that me posting an article like this will make much difference in the end, but every little helps and it may make more difference if you amplify its effect by passing it on to others - the password has been taken off to facilitate this.
Posted at 10.10 am EST on 30th December 20.