PALLADIUM, TESLA and the IMPOSITION OF ELECTRIC VEHICLES...

What underlies the tremendous runup in the price of Palladium and now the giant spike in Tesla stock? They are connected. Tesla stock has spiked despite its self-driving cars doing strange things like running people over and spontaneously combusting. The reason for this is the relentless drive towards electric cars which will result in a massive increase in demand for palladium and electric car manufacturers like Tesla becoming mainstream.

The elites have a Master Plan to push ordinary motorists off the road and back onto public transport, and they will realize this by using the environmental scare to effectively outlaw petrol driven cars and force a transfer to expensive electric cars, which will be out of reach of many motorists because of their cost. Greta is a pawn in this game.

You may be asking what is the motivation for doing this. There are a number of reasons. One is to reduce the profligate consumption of oil by the masses for their personal transportation and the resulting pollution. Another is control – a public who lack personal transportation and the freedom it brings are of course easier to control and direct. Lastly it will free up the roads for the elites, who will suffer less from delays caused by traffic congestion resulting from the masses on the move, since they, the elites, will always be able to afford private vehicles, no matter what they cost.

The masses will not resist this transformation of their lives. First of all they are ignorant and have no idea of the plans for them that are already at an advanced stage. Secondly, they are too cowed and docile to do anything about it even if they did know.

Now that you know what is set out above, you should be able to readily appreciate why the price of palladium, and of Tesla stock, have been soaring. Let’s now proceed to look at their extraordinary charts.

Starting with palladium, we see on its long-term 20-year chart that after essentially tracking sideways for many years, the phase of accelerated advance really didn’t begin until mid-2018, and it was only later in 2018 that it broke out above its highs way back in 2001. So the dramatic acceleration in its rate of advance has been going on for 18 months or less. 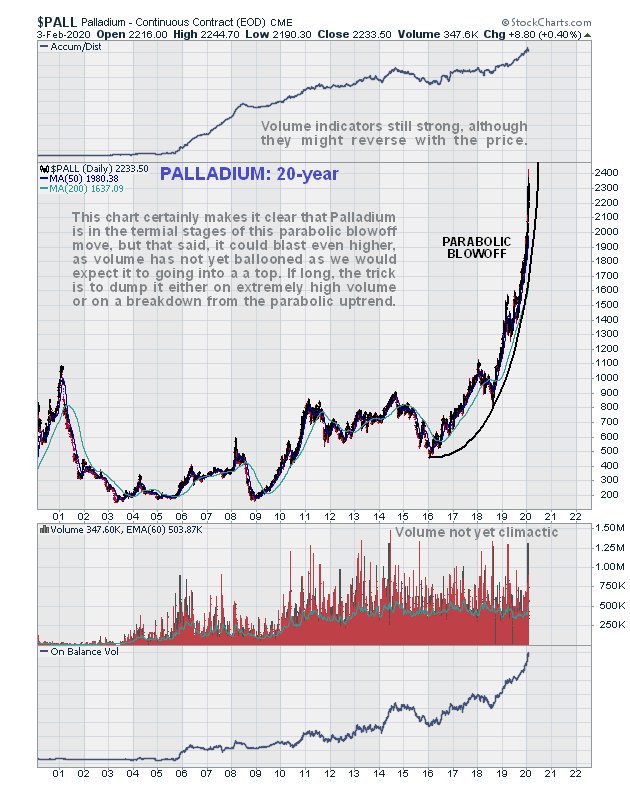 We can see the period of accelerated advance in more detail on the 5-year chart, and how the point of origin of the accelerating parabolic uptrend is at the start of 2016. The price only cleared the resistance at the 2001 highs in the $1080 area as recently as late 2018 and it is only over the past 6 months or so that we have seen dramatic acceleration. This chart makes clear that as the price has now run way ahead of its parabolic supporting uptrend, there is plenty of room for it to correct back or consolidate without breaking down from the uptrend, although it could well spike even higher from here, with speculation now rampant. 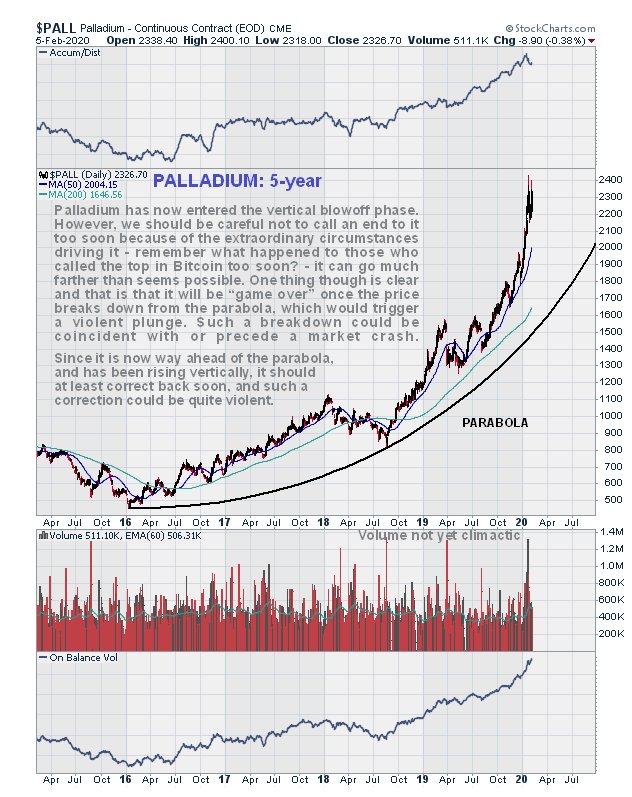 On the 6-month chart we can see that at the recent peak volume became really heavy, which puts us on notice that even if this wasn’t the top for this run, a top may not be far off. 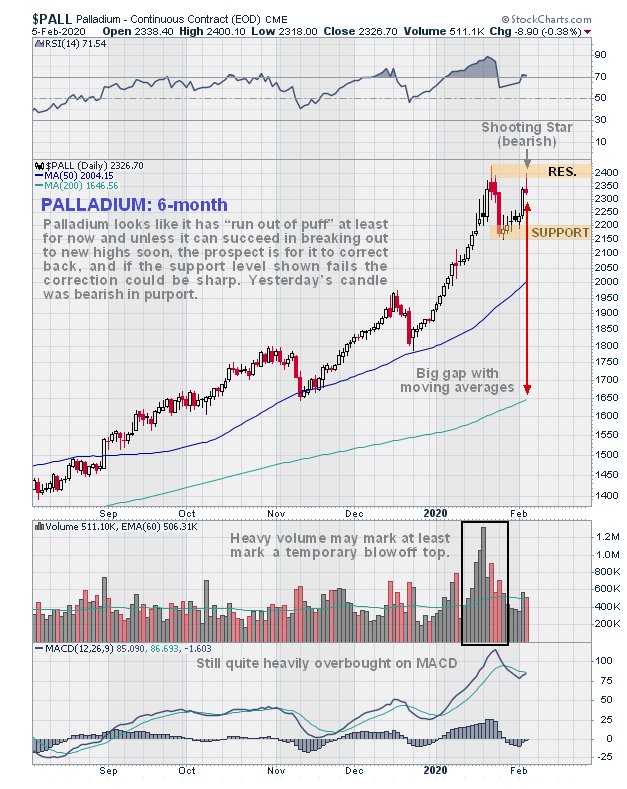 Turning now to Tesla, we can see that it has suddenly gone vertical in recent weeks, which implies that the age of the electric vehicle is almost upon us. Even so, this move looks extreme, especially on long-term charts and suggests that a reaction back or period of consolidation is now likely over the short-term. 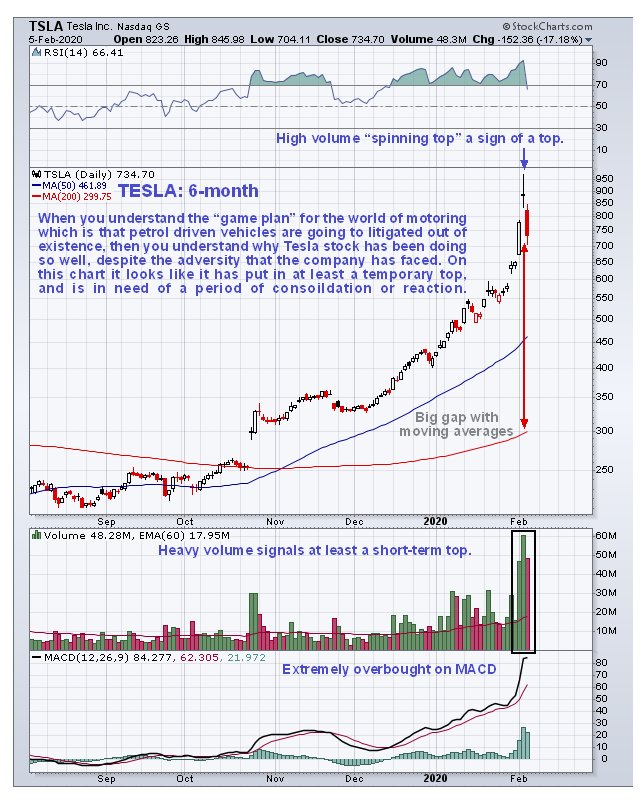 Modern cars have become a nightmare of over-regulation and control and it’s going to get a lot worse. They got rid of ignition keys so that you now have a push button start and have to pay for very expensive key fobs. All modern cars look the same because of draconian regulations regarding impacts and safety, and they are all designed in the same wind tunnel. For unknown reasons – probably bigger profits for the manufacturers – most cars are the same standard colors. “You can have any color you like sir, as long as its black, red, silver or white.” The core of the car is too heavy for safety reasons and is compensated for by flimsy bodywork, in order to meet fuel consumption targets. Bumpers, which used to be designed to take impacts with no damage or resulting cost, are now made of delicate painted structures which cost a fortune to fix after even the slightest impact, but that’s no problem because the insurance covers it, except that this means raised insurance premiums. You can’t turn the engine off and open the door and listen to the radio on a hot day, because either it switches it off or starts making stupid bleeping noises. Some new cars switch the engine off every time you come to a stop, and you have to be at a dead stop to put it in gear etc. Your location is always known because the car is computerized and online, which incidentally means that it is theoretically possible to hack the car remotely and cause it to crash, by say, locking the brakes. For this reason also you can never be sure that any conversation you have in the car is private – they could be broadcasting it live in the Superbowl stadium. Even for a 100 meter trip down the road the baby or child has to be strapped into a child seat. The list is endless and the future is going to be even worse. Rear view mirrors are going to be swapped for cameras that display on the central screen, so if anything goes wrong with it you have an expensive replacement of the entire system. There are going to be cameras mounted on /in the dash that monitor your facial expressions and if you look drunk or tired, the onboard computer will seize control of the car and force it to pull over. Likewise your days of breaking speed limits are over, since the car won’t let you. No wonder teens are not interested in cars anymore – you won’t hear any of them saying told my girl I had to forget her, rather buy me a new carburetor.

If you want to gain comprehensive insights into the momentous changes being imposed on motorists, you can do no better than read Eric Peters on The End of the American Car, The reasons car bodywork is so flimsy, Misleading information on Electric Vehicle range, The ghastly electric Hummer, On government mandated MPG minimums, On the timeline for the imposition of electric vehicles and other articles by Eric on this subject may be read on his website ericpetersautos.com

With respect to your motoring quality of life, the best thing any of you reading this can do is get yourself an old car, that was made before all this nonsense started, and then run it into the ground, or until they legislate you off the road.

Returning to our main theme, the outlook for both palladium and Tesla stock looks rosy, although at this point they both look overdone and in need of significant consolidation / reaction.