The omens are growing that Apple is setting up for a waterfall decline soon, or perhaps a simpler and more direct way of describing it would be a brutal plunge.

We are going to return to our main theme of the Precious Metals sector setting up for a monster rally shortly, but it’s worth taking a slight diversion first to look at this again because of the potential for massive windfall gains for those who buy Puts in this area before it breaks down.

You may recall that we already nibbled at Apple Puts some days back, when, for example, the 20th March expiring $300 Puts were priced at $2.11 ask and it’s a good thing we did because they are now at $2.65 ask – and the fireworks haven’t even started yet.

To better understand why a severe drop in Apple stock is looking likely soon, we will start by gaining the Big Picture perspective by means of a 4-year chart. On this chart we can see how out of whack the stock has become. In a little over a year it has more than doubled in price, which is a lot for a weighty stock like this, and its rate of climb has become unsustainably steep as shown by its 200-day moving average, with a frighteningly large gap having opened up between its moving averages. With the churning of recent weeks as Big Money offloads to weaker hands, it is looking like it is perched on top of a cliff, and if a big selloff ensues it could easily find itself back at $230 – or lower – and fast. 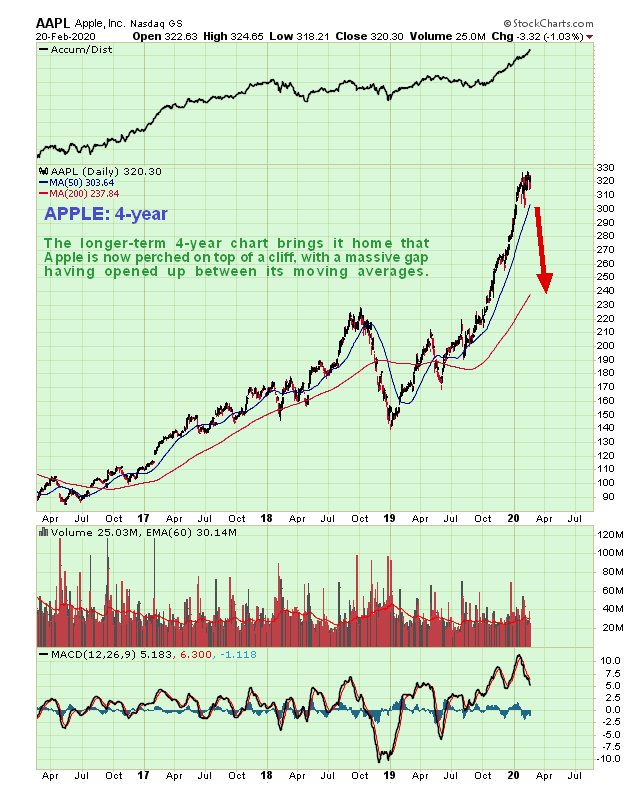 On the 14-month chart we can see what is set out above in more detail, and in particular how the price staged a “throwover” breakout of the steep uptrend channel in January and has been churning at a high level since, which action is bearish. What makes the call for a severe drop more tricky is obviously that the weakening of the price ahead of it results in a neutralization of short-term oscillators like the MACD, which theoretically set it up for another rally, so we have to take other factors into account before drawing our conclusions. One of these factors is that, although neutralizing, the MACD indicator has gone too far, resulting in a momentum breakdown such as typically precedes a severe decline. As already mentioned the huge gap between the moving averages is another important factor. 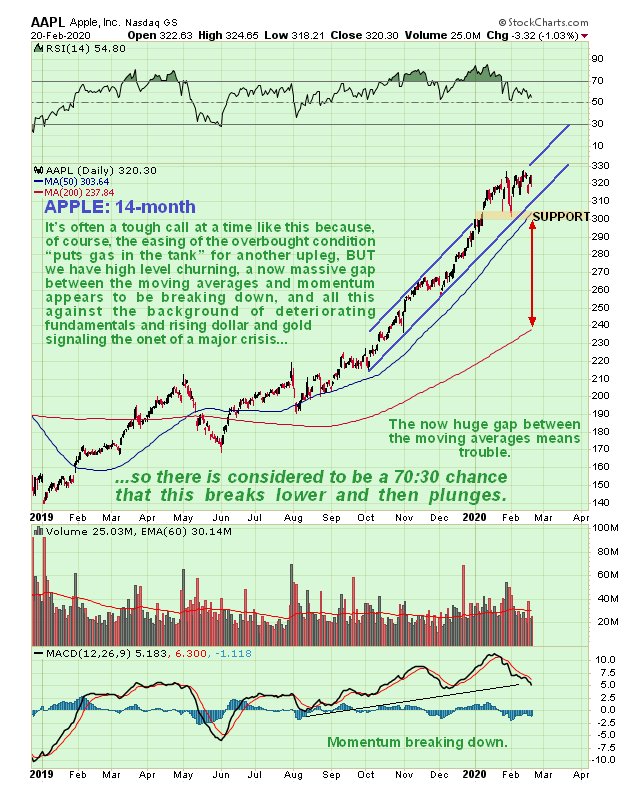 On the 6-month chart we can see recent action in more detail and how, on this log chart, the price did not stage a throwover breakout, and also, is close to breaking down from the channel. While a breakdown from the channel will be what sets the ball rolling downhill, it will be a breach of the support at $300 at the lower boundary of the recent pattern that sparks a steep plunge. 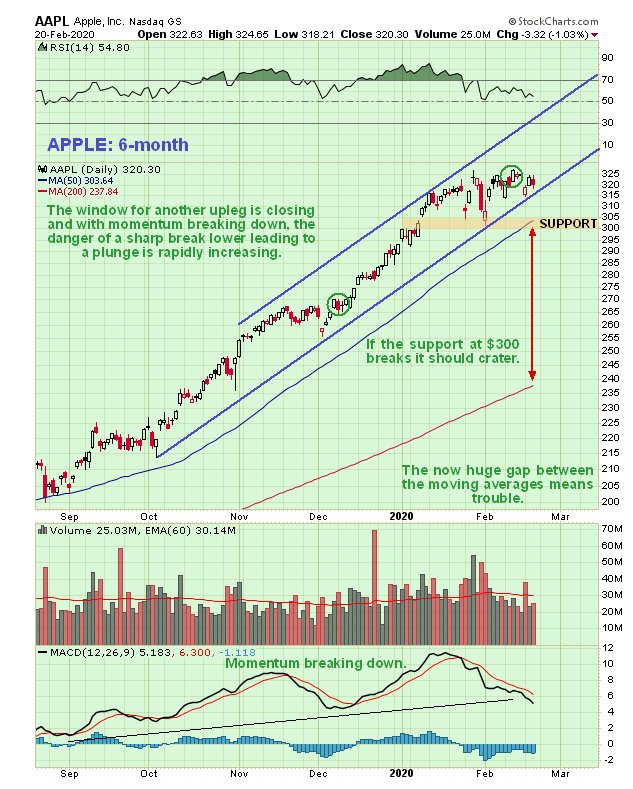 The conclusion is that fairly near expiring Puts in Apple continue to be viewed as very attractive for speculators here, and if the expected action doesn’t occur before expiry, we will probably roll into later expiries. If you are of limited means, don’t go putting more than a small amount of your capital that you can afford to lose into something like this. For the “fat cats” amongst you it’s different of course – you can probably afford to “back up the truck more”. As ever, use common sense. 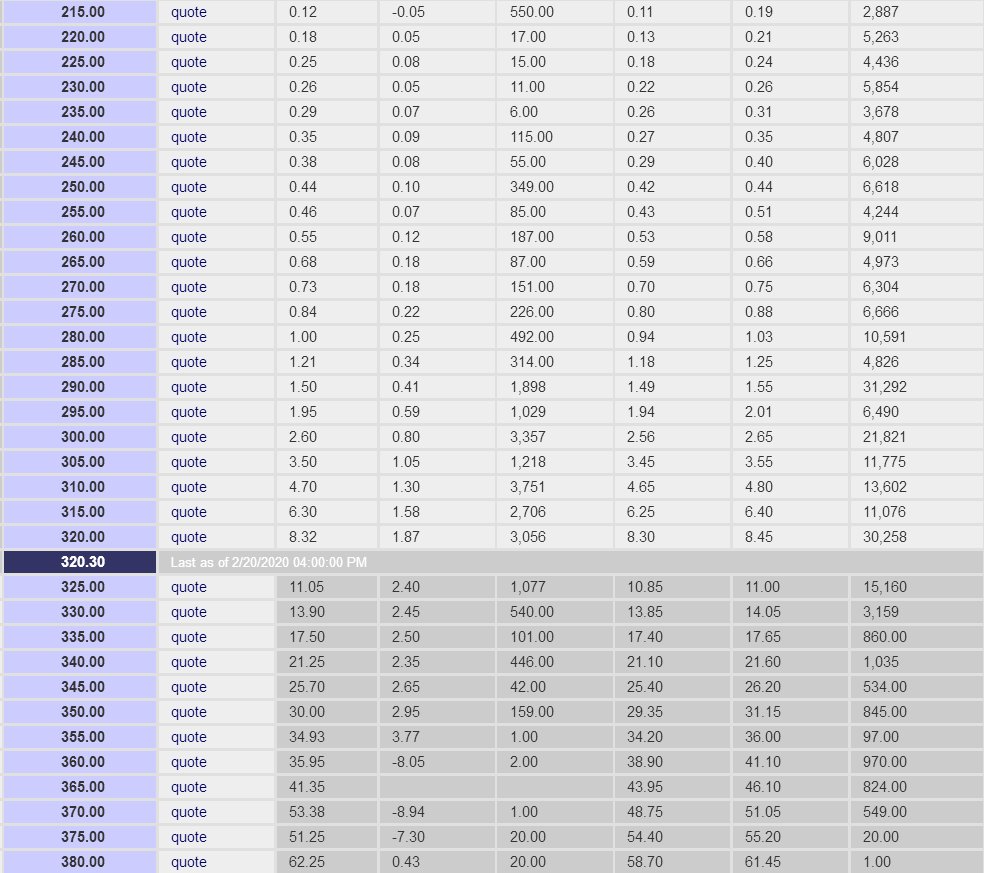 Finally, it is worth pointing out that Microsoft (MSFT) remains a fine candidate for Puts, and Tesla (TSLA) looks like it may be Double Topping with its early February high.