TANZANIAN GOLD CORP - time for investors to START LOOKING FORWARDS INSTEAD OF IN THE REAR VIEW MIRROR...

Tanzanian Gold stock got clobbered by a big financing last December, and then it got beaten down further to a low in March when the entire market caved in, including gold stocks, so it has remained “under a cloud” since the financing, never really recovering with the sector in April, and it is only in the past week that it has started to perk up, as we can see on its latest 6-month chart below. It is now clear that a base pattern has been building out since last December that has allowed time for sentiment to recover and for its moving averages to start to swing into a more positive alignment. An especially positive development is the improvement in the volume pattern that has led to a marked improvement in the Accumulation line in recent weeks. This, coupled with momentum (MACD) swinging positive, suggests that it is getting ready to break out of this base pattern at last. 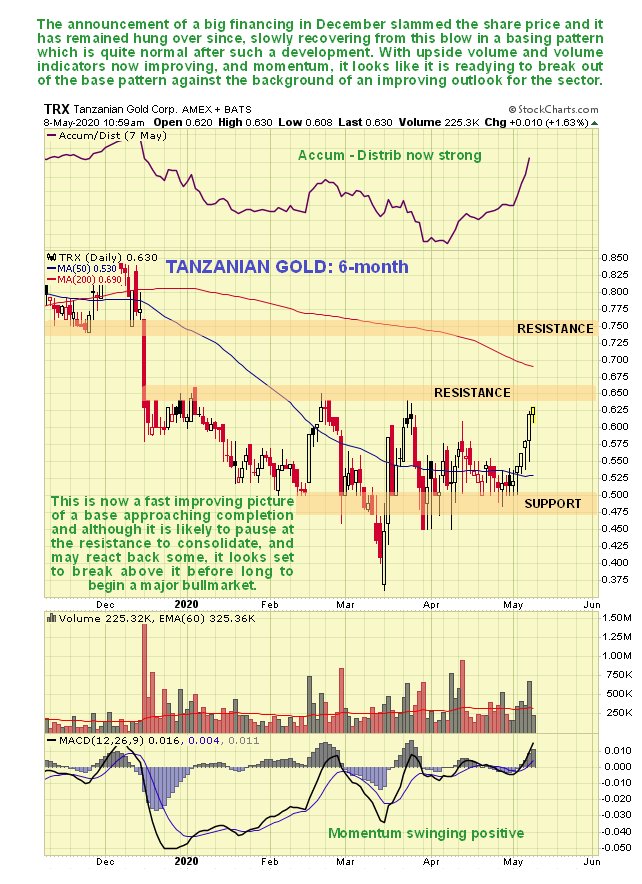 It is thus encouraging to see that on the 18-month chart it has broken out of the downtrend in force from last July just over the past week. This chart also shows that, in addition to the nearby resistance level marking the upper boundary of the recent base pattern, there is another level of significant resistance on the way up centered on 75 cents, however, given how rapidly the outlook for gold is improving, it is considered unlikely that these resistance levels will prove to be much of an impediment. 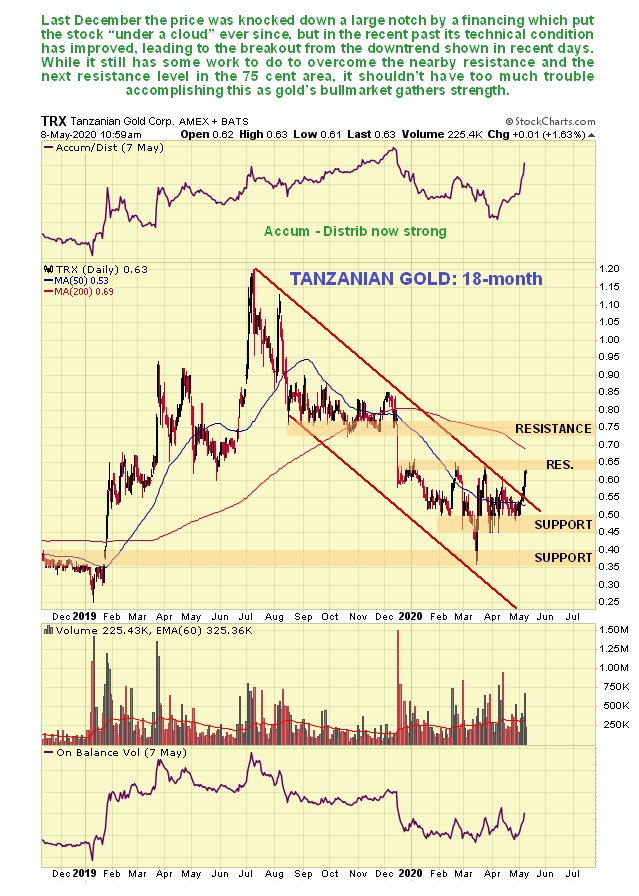 On the fundamental front there have been a string of very positive developments for the company this year, which include…

Zooming out again, the 6-year plus chart shows to advantage the entire giant base pattern that has formed in Tanzanian Gold at a low level since early 2015. This chart begins to make clear how historically cheap the stock is. 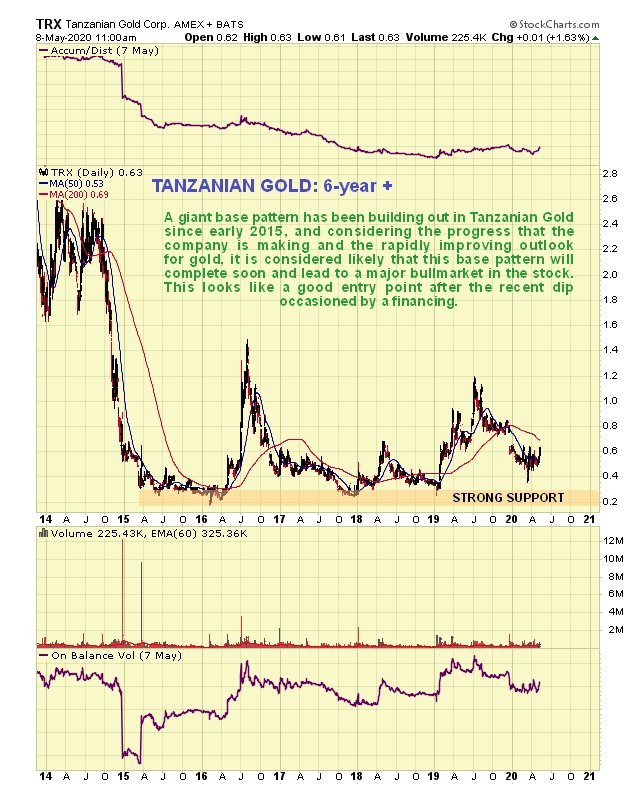 Finally, the 18-year chart makes the stock look even more cheap as we can see that it is now at a very low price compared to the heady days of the 2000’s and going into 2011, when hope triumphed over reason. The ironic thing is that, now that the company is much closer to attaining its goals with respect to the development of its mines, against the background of a gold price that is headed to the moon, because of the impending hyperinflation which the Fed is already enthusiastically feeding, the stock price is historically at a very low level, way below where it was in the 2000’s, implying that we should soon see the triumph of reason over despair. 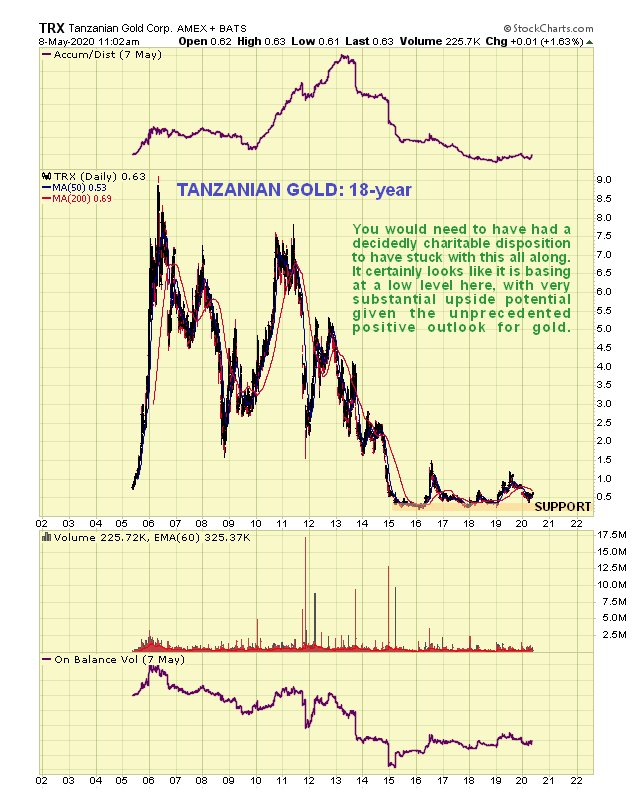 Tanzanian Gold Corp. was mentioned as a most promising gold stock in the Precious Metals Sector Alert posted at 3.30 pm yesterday and it was nice to see your buying drive a sharp move higher in the stock during the last half hour of trading. 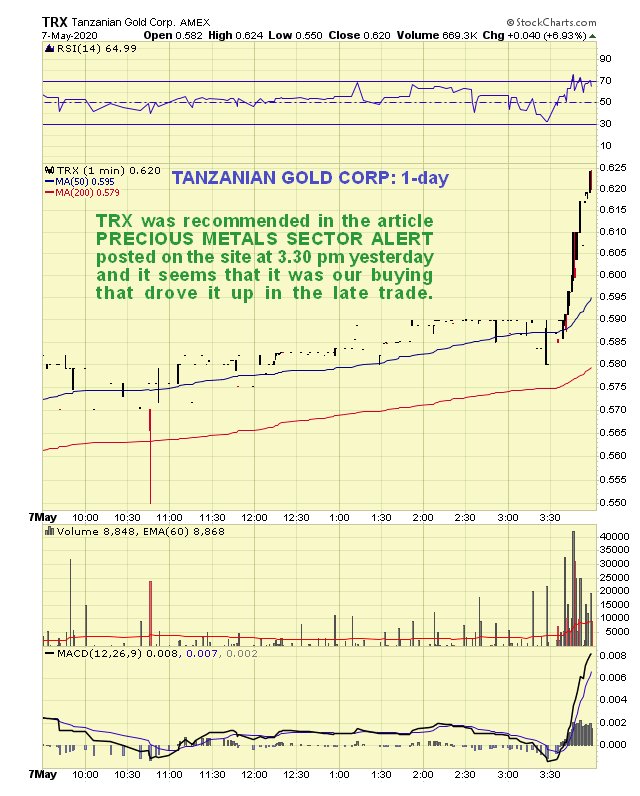 The conclusion is that Tanzanian Gold is a strong buy here for all timeframes, only qualified by the observation that we could see a minor dip over the short-term as it is a little overbought, although there may be no dip at all.