There’s been some talk in recent days about copper’s rally spluttering, but with commodities generally revving up to soar, fuelled by massive money creation leading to a big ramp up in inflation, it seems unlikely that copper will be left behind and give up its recent gains – more likely is that it simply continues higher.

Given how copper has been forging ahead in recent months it seems remarkable that Libero Copper’s lengthy downtrend hasn’t ended already, but the good news is that, although it hasn’t ended, there are strong signs on its chart that it is about to, and that Libero will soon reverse decisively to the upside.

On its 6-month chart we can see the stubborn downtrend in force from early August, and although there is little indication in the price pattern that a reversal may be imminent, the volume pattern and Accumulation line are telling a very different story. There has been a big buildup in volume over the past month that has been accompanied by a soaring Accumulation line which indicates, well, accumulation. In contrast the On-balance Volume line has remained rather weak, and the reason these volume indicators tell such a different story on this occasion is that the Accumulation line is compiled on a “tick for tick” basis, whereas the On-balance Volume is only “end of day”. In a situation like this we trust the former more, because it is point for point method of assessing volume whereas the latter lacks information. 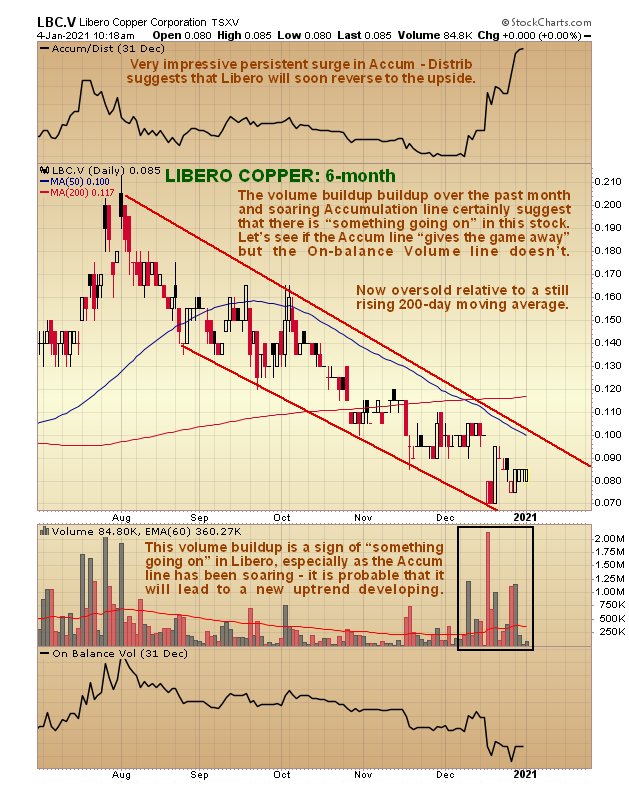 Given the former and that Libero is now oversold relative to a still rising 200-day moving average after a lengthy downtrend, the probabilities of its reversal top the upside now or very soon are considered to be high, and it is accordingly rated an immediate speculative buy here.