IMPORTANT: breaking news on morning of 8th: EV BATTERY TECH ANNOUNCES PARTNERSHIP WITH DAYMAK, THE #1 DISTRIBUTOR OF LIGHT ELECTRIC VEHICLES IN CANADA. As pointed out in the news release “Daymak's current customers include Walmart, Costco, TSC, QVC, Best Buy, Hudson's Bay and a network of 150 dealers across Canada and the USA. Daymak also has showrooms in Los Angeles, Toronto and Rome, with more expected in the future.” This is clearly massive news for EV Battery Tech, which means that we will probably see the stock make new highs soon, and it could even gap to new highs this morning. It may be a buy at the open, provided it doesn’t gap up too much.

Sometimes in this game you have to exercise a little patience. This is not something that we particularly like, because we want to make money as fast as possible, but we do recognize the need for it. We bought back ACDC on 27th January at a very good price, with an email alert being sent out that read as follows…

“The market has thrown a bit of a tantrum this morning, which is worry by stimulus junkies worrying that they will not “get their fix” ahead of the Fed statement today. This is normal and it seems very unlikely that they won’t get their fix, so the dip means some stocks can be picked up at better prices.

You may recall that we sold Extreme Vehicle Battery Tech for a modest gain at its recent 2nd peak, upon realizing that there would be a second dip within the bull Flag / Pennant pattern before the larger strong uptrend gains traction again – the pattern from the peak looks like a 3-wave A-B-C correction. This happened as after we sold it at C$0.25, it has dipped back to C$0.19. There has been a further minor drop today with an indecisive looking candle forming which suggests that it is probably at or close to a bottom here ahead of renewed advance, especially as volume has become very light today by recent standards. So it is believed to be at a buy spot here. A stop may be placed just below C$0.16 although it is thought unlikely it will be triggered.

Following our purchase on the 27th it got a bit worrying when, day after day, it kept testing the line of support at $0.18, prompting fears that it might break lower in the way Loop Insights (MTRX.V) did soon after we bought it (Loop, by the way looks like it is about to make the sort of move up that this did on Friday, so we’ll take another look at it shortly). Hence, the update on ACDC a couple of days ago, where it was suggested that a stop be placed below the line of support at C$0.18. Happily it wasn’t triggered and the rest is history, as they say, for yesterday there was a really strong move higher on big volume which suggests that we will soon see new highs. Most important to note is that the US traded stock broke higher on massive record volume by far, making new highs intraday. This is viewed as very bullish.

Since we bought ACDC over a week ago at a very good price when it was down at support we are already showing a good profit, and since the action yesterday suggests that it will continue higher still, notwithstanding any minor near-term dips, no action is required by us at this time. We simply wait and watch, ready to take profits if it should rally further in the near future to become extremely overbought. 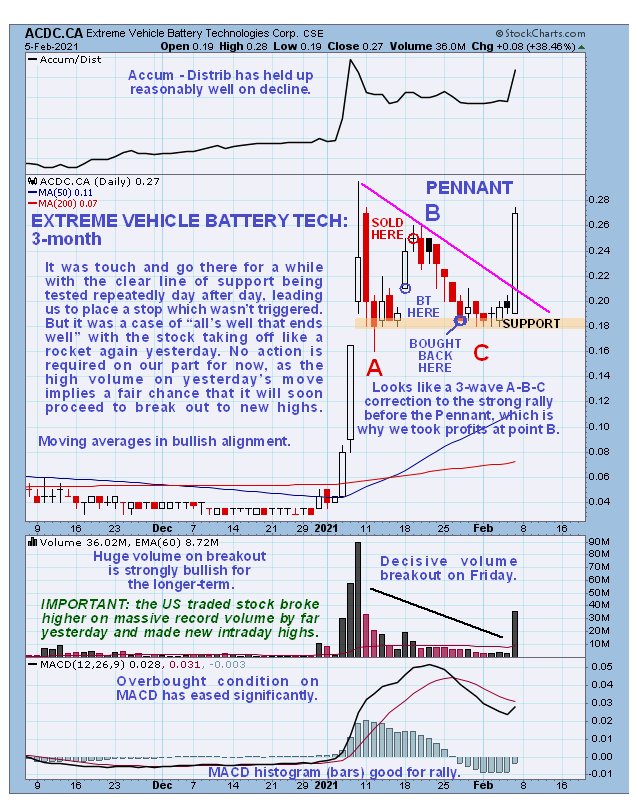