Bion Environmental Tech has been kept under observation in recent weeks as it looks like it is preparing to embark on a major uptrend. As its name implies the company is involved in the green technology space which is a good area to be in with the climate change movement driving a lot of changes and developments.

It certainly cannot be claimed that the company has not been preparing for the times that we now find ourselves in and the times ahead for on the very long-term chart shown below we see that it has been around for a long time and was actually trading at much higher prices back in the 1990’s. On this arithmetic chart it looks like it has been in a giant basing pattern since 2003, so for 19 years now and that ought to be all the preparation anyone needs. Although this chart is not of much use technically, there are two important bullish points we can observe on it. One is the steady upward march of the Accum – Distrib line during the latter part of the giant base which is a sign of an incubating bullmarket and this portended the strong breakout move on big volume early last year which we can just make out. 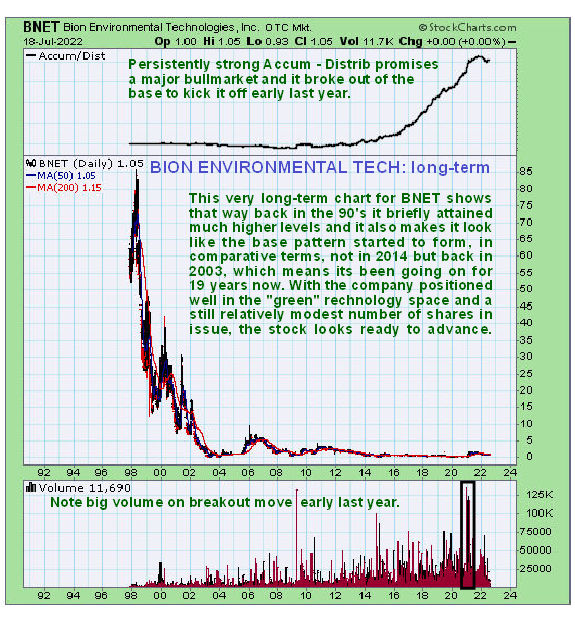 Because of the earlier high prices the base pattern is “squashed flat” on the arithmetic chart, so we will now look at a 13-year chart which opens it out because it drops these earlier high prices in the 1990’s and early 2000’s. On this chart we see that within what we took to be a giant base pattern on the very long-term chart, we can see a bearmarket from the 2010 peak that hit bottom late in 2014. A large base pattern then developed that really started to form late in 2013 that can be classified either as a Double Bottom or as a Cup & Handle base. The steeply rising Accumulation line shown at the top of this chart promised a breakout from this base, which duly occurred early last year, that was quite spectacular, it occurred on huge volume and resulted in big percentage gains in short period of time. Yet, as so often happens at the end of one of these giant base patterns, the price reacted back into the upper part of it to form a “Handle” to complement the Cup, which reflects the fact that it takes time for the fundamentals to improve enough to justify the revised higher valuation of the stock. With the volume pattern and Accumulation line remaining strongly bullish it looks like investors are being presented with a fine opportunity to buy into BNET before its bullmarket really gets going in earnest. 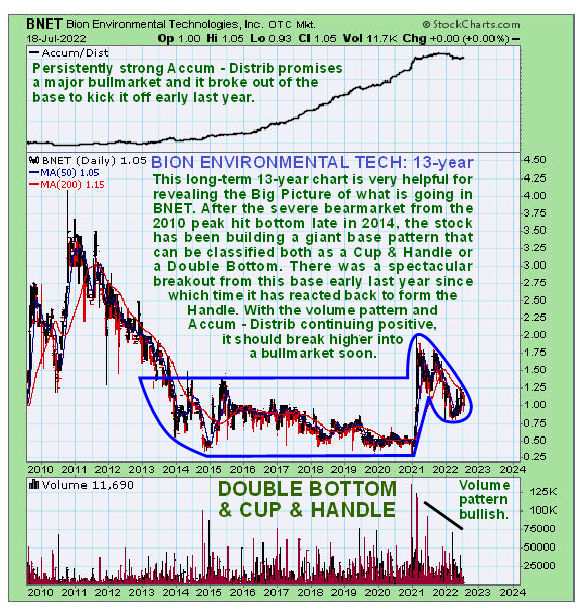 So now we will proceed to look at recent action in the stock on the 6-month chart. The reason for holding off recommending it in recent weeks, apart from broad market weakness of course, is that having made a run at its still falling 200-day moving average to become short-term overbought, it looked like it would react back some, which it has now done. This reaction has allowed time for the converging moving averages to come together more, creating a better environment for a sustainable advance to gain traction, since any significant advance from here will quickly result in a bullish cross of the moving averages. It is encouraging to see it dropping back intraday over the past few weeks to successfully test the support level shown, which has left behind a string of bullish long-tailed candles on the chart. So it now looks better placed to seriously challenge the resistance in the $1.10 - $1.30 zone better seen on longer-term charts. 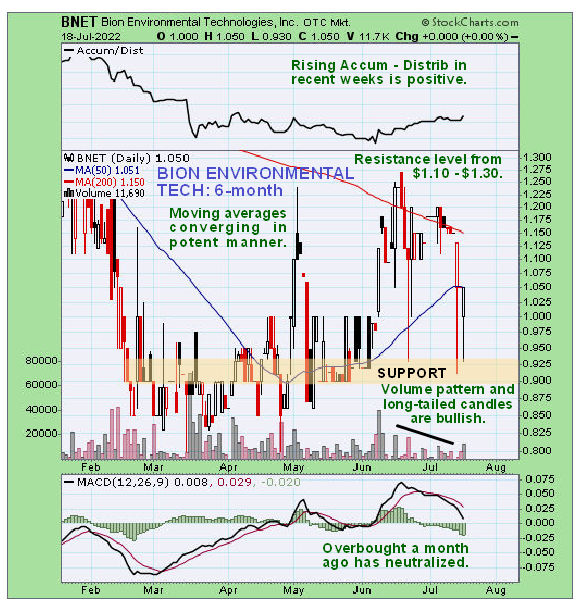 The conclusion is that Bion Environmental Tech is building up to a major bullmarket which it now looks very close to starting, with the reaction of recent weeks bringing it back to a good entry point and it is rated a buy for all timeframes. Given the length of time the company has been around the number of shares in issue is very reasonable at about 43 million, so this will not be an inhibiting factor.