While the long-term outlook for gold could hardly be better, the short to medium-term outlook deteriorated substantially last week, with an important chart reversal on Thursday that was not negated by Friday?s bounceback, latest COTs coming in very bearish with record readings, and the $5,000 an ounce gold crowd hawking their wares more aggressively than ever ? it?s not they are necessarily wrong, it?s just that they are naturally most vocal at tops, when they can suck in the most hopefuls.

As you may know, we have not been raving bullish on gold in recent months, largely because of the offputting COT structure, and this was not an unreasonable stance given that gold has only risen by about $20 from its early March highs as we can see on its latest 6-month chart below. Last Thursday was an important day for gold; in the early trade it advanced to new highs, but reversed violently intraday to close well down on the day on high volume, leaving behind a classic ?shooting star? reversal on its chart. As we can see it didn?t reverse where it did by chance ? it reversed right at the restraining upper boundary of the pattern that has formed over the past several months ? and it is now becoming increasingly clear that this pattern is a flat-bottomed broadening formation. These patterns are normally bearish in purport, although the price sometimes leaps out of the top of it and spikes before reversing and dropping hard. This interpretation is supported by the latest COTs, which look horrendous, it has to be said, which we will now take a look at. 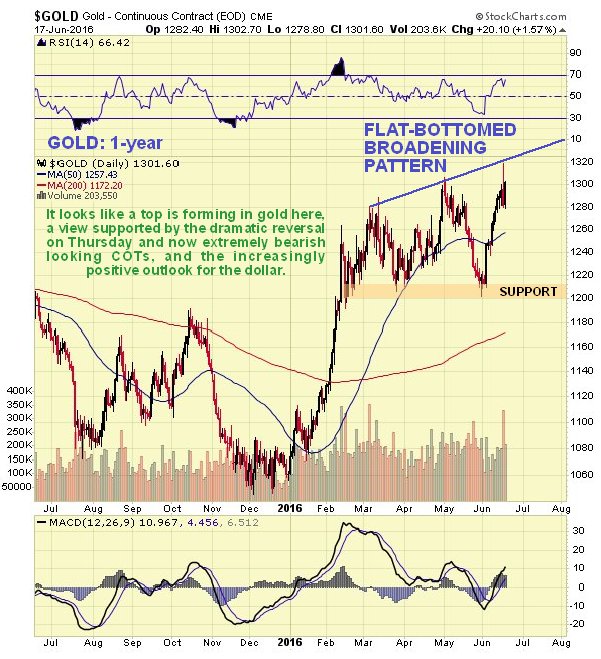 The latest COTs show a dramatic surge in Commercial short and Large Spec long positions over the past two weeks to new record extremes. This is viewed as an outright bearish setup, especially given the price pattern that we have observed on gold?s chart above, and Friday?s bounce is viewed as providing the valiant and experienced trader with an an ideal shorting setup. 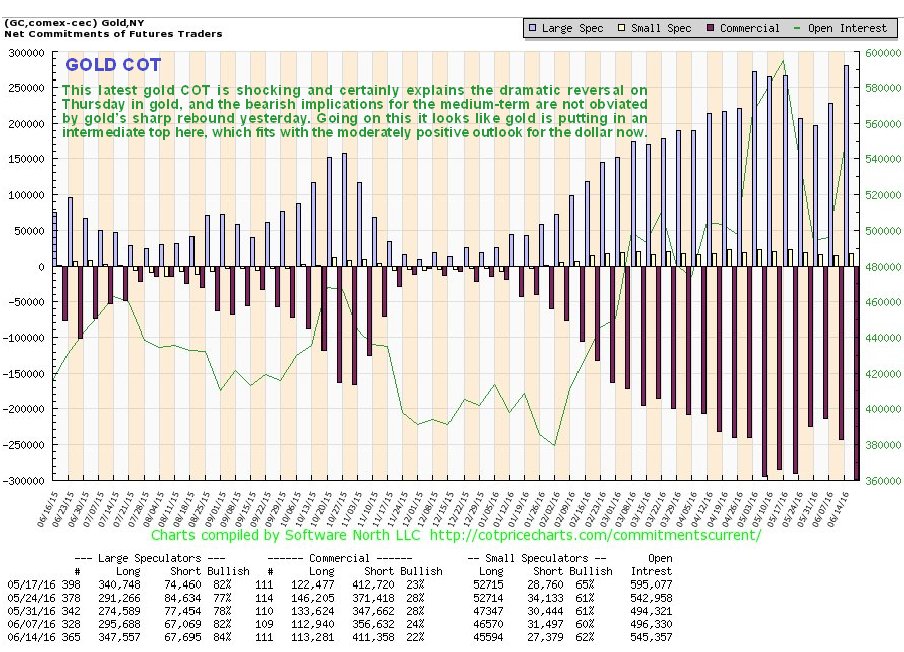 The latest Hedgers chart shows positions now at a wild bearish extreme, and remember, this is not my interpretation ? it is the cool and objective interpretation of www.sentimenttrader.com who are responsible for the red bearish dotted line on this chart. If you are a trader long the sector, and are not worried by this, then I am sorry to say it, but you are a fool. 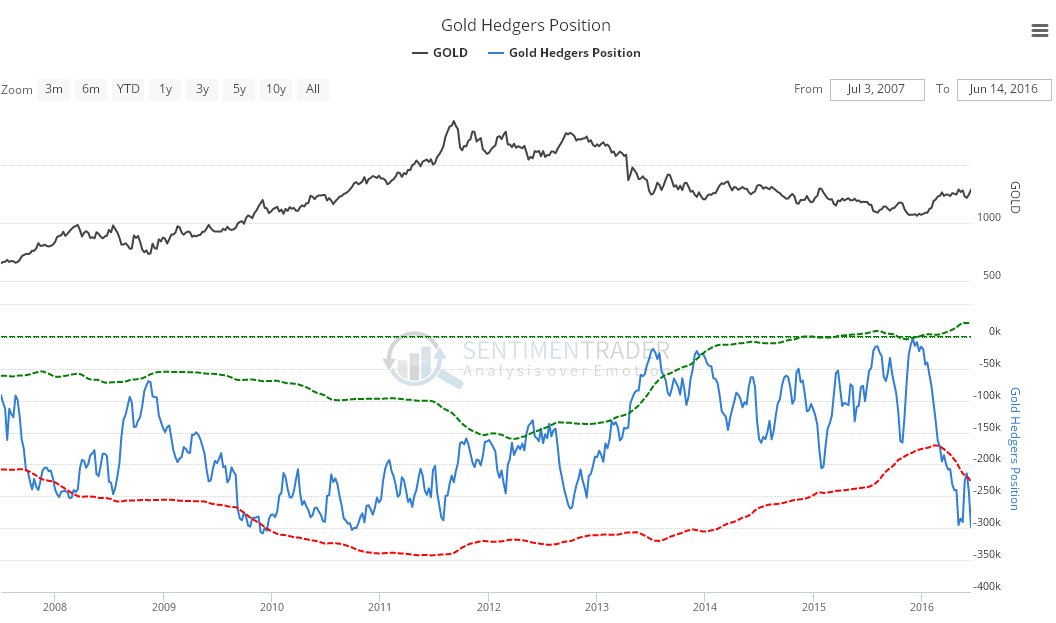 The latest gold Optix, or optimism chart, likewise sounds a warning bell, with optimism spiking to an extreme reading that has immediate bearish implications. 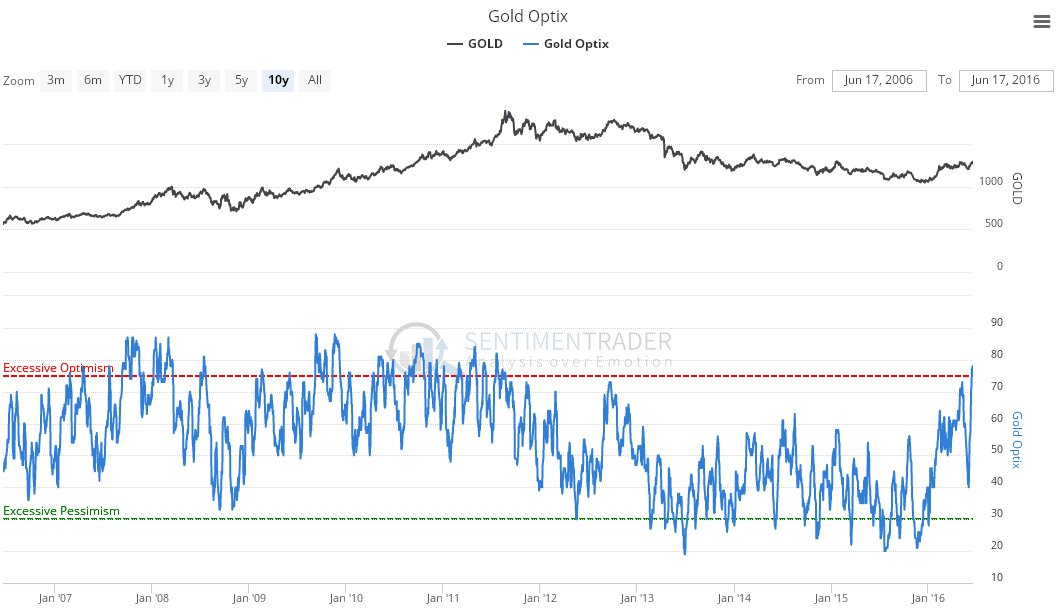 What would be the most likely cause of a drop in the price of gold soon? Why of course it would, as ever, be a rally in the dollar. What are the chances of the dollar rallying? ? pretty good actually, as we will now see?

On the 3-year chart for the US dollar index we can see that it has stabilized above strong support towards the lower boundary of a giant rectangular trading range, with a potential base pattern forming in recent months. 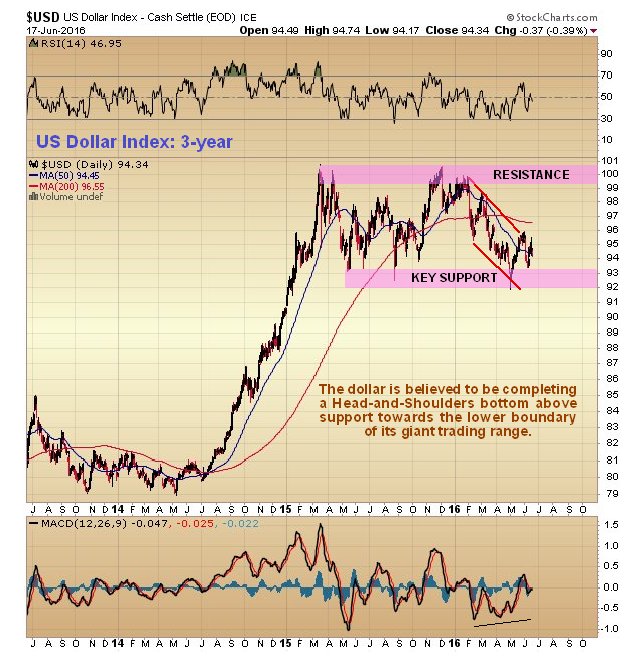 On its 6-month chart it looks like the dollar index may be working on completing the Right Shoulder of a Head-and-Shoulders bottom. If so, a sizeable rally is brewing. 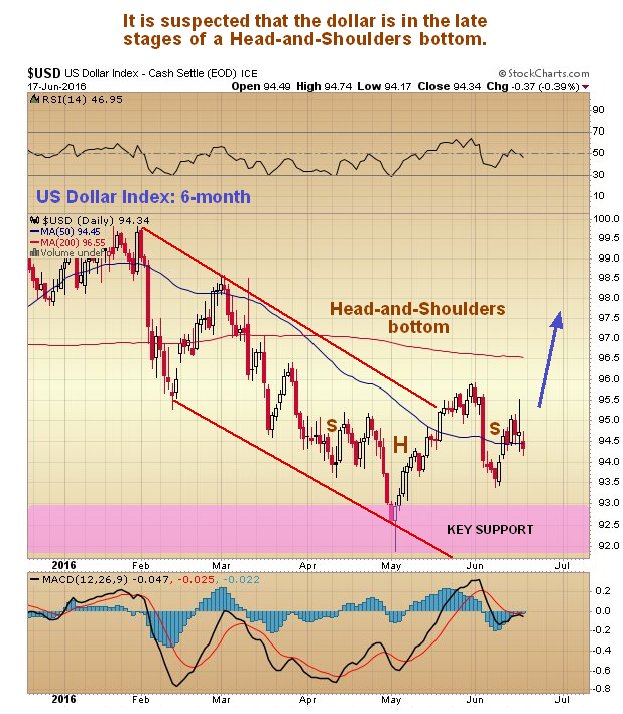 The latest US dollar Hedgers chart makes for interesting viewing. This chart shows that Hedgers? positions have been steadily improving since the dollar peak over a year ago, following the strong runup, and they are now closing in on being outright bullish ? and we should note that the dollar doesn?t have to wait for that to happen to start rallying. 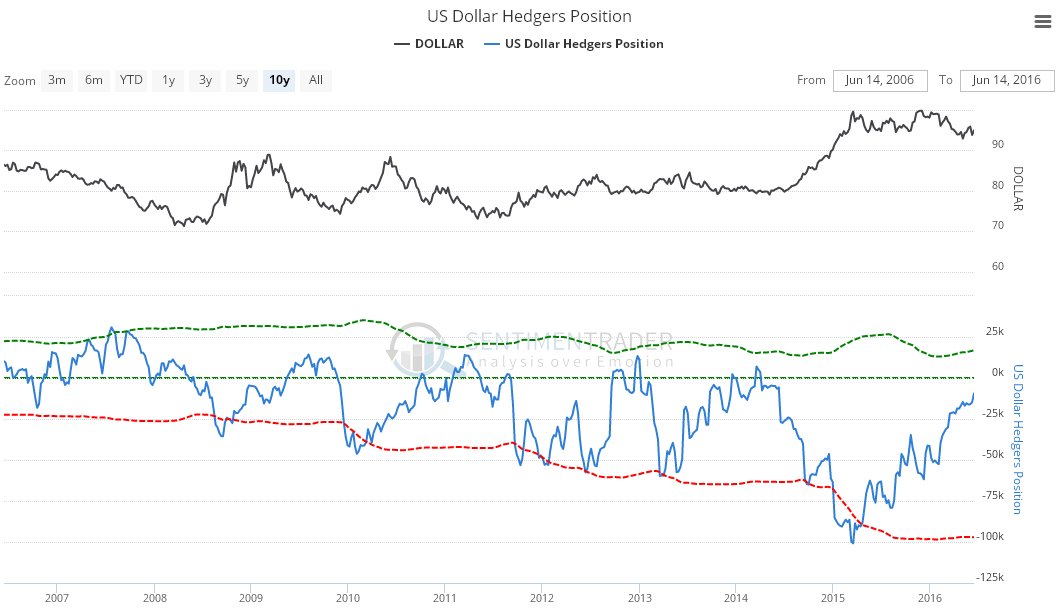 While the latest US dollar optix chart shows readings still in middling ground, they are on the bullish side of middling? 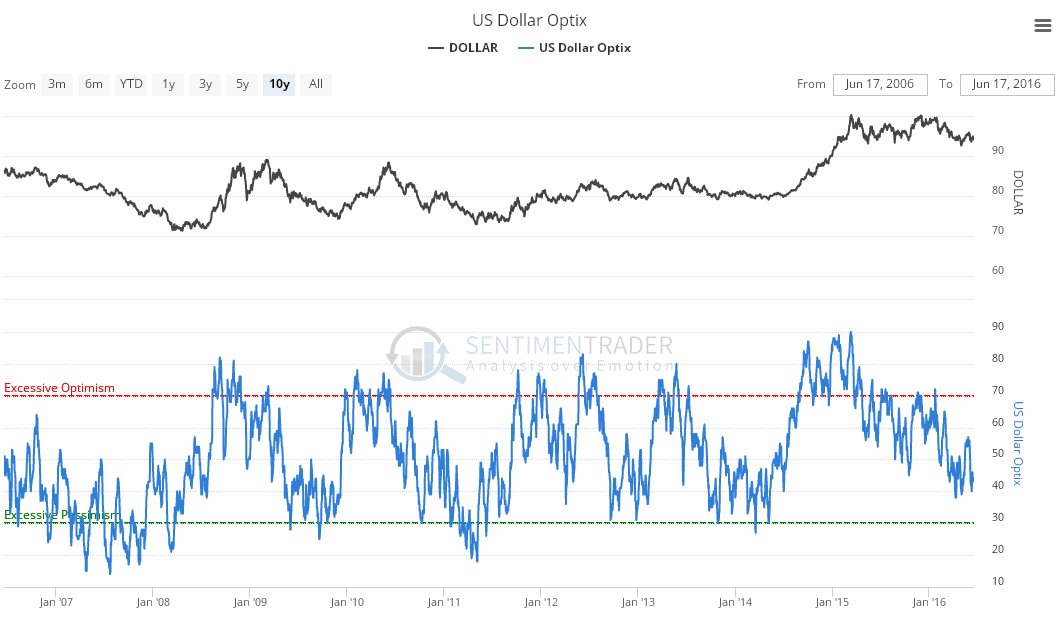 Why should the dollar rally after suffering so much abuse at the hands of the Fed and big banks in recent years? ? important reasons are not hard to find. In the first place, the Fed may have been abusing the dollar, but most of the rest of the world has now followed suit, with many Central Banks around the world striving to outdo the Fed. The European Union and Japan in particular have evolved into masters of outdoing the Fed. Another big reason is that global markets are now in the late bubble stage, and this includes bonds, stocks and Real Estate, and are increasingly unstable, so that various ?black swan? events could trigger a general crash, like the Fed stubbornly raising rates later this year in the face of an already crumbling economy. Finally, like it or not, the US dollar remains the global reserve currency, and US elites intend to keep in that way, as Russia is now finding out at the point of a gun.

If you agree with what is set out here, then what options are open to you? ? these are many and various depending on your personal situation and current investments. If you have done well out of the recent sector rally you should consider taking all or partial profits, or hedging with options. If you are a latecomer you should beware of getting sucked in at this stage, this is especially the case given that many investors already appear to have forgotten just how fast this sector can drop when sentiment changes. If you are an experienced trader who has just turned up on the scene you may want to consider taking advantage of the current setup by shorting the sector using inverse ETFs or options.

A final important point is that if the Brexit vote results in Britain leaving the EU, it could potentially unleash a financial tsunami that sees markets crash and gold, silver and other commodities taken down as the dollar soars. It is impossible to say which way this vote will go. The ordinary voting public are being subjected to heavy and relentless and also carefully contrived propaganda by the mainstream media, who are controlled by the elites who are obviously pro the European Union and it remains to be seen whether they can be herded like sheep into voting in the desired manner, as the Scots were, when they succumbed to scaremongering about the consequences of becoming independent. Europe is falling to bits, evidenced by the dead-end desperation of negative interest rates which itself is sluicing capital into dollar denominated investments, and Britain leaving will only hasten its demise, as other countries will be emboldened by this and want out too, so it?s small wonder that the dollar index would soar as it is comprised about 57% of the euro.

It is understood that this update will not exactly make me popular with goldbugs, but I am more interested in trying to be right than popular.