Gold continues to build towards its breakout from a massive 4-year long base pattern. This is likely to occur when the dollar breaks down from its topping pattern, and is expected to lead to a bullmarket that will dwarf the last one from 2001 through 2011, and may be given a tailwind when the cryptocurrency Ponzi scheme implodes. In some quarters gold is being described as having broken out already, as are gold stocks, but they haven’t yet, as we will see, and we will also look at evidence that points to the probability of a short to medium-term dollar bounce and a pullback in the Precious Metals sector before the big breakout occurs.

On gold’s 10-year chart we can see its fine giant 4-year long Head-and-Shoulders bottom approaching completion, with the price rising up in recent weeks to the broad band of quite strong resistance at the top of the pattern, partly due to tensions over N Korea. These are expected to ease, which will make a short-term correction back more likely. Before leaving this chart note the volume build on the rally out of the Right Shoulder low of the pattern, and the strength of the volume indicators shown, especially the Accum-Distrib line, which rather amazingly is already at new highs. This certainly bodes well for the longer-term outlook. 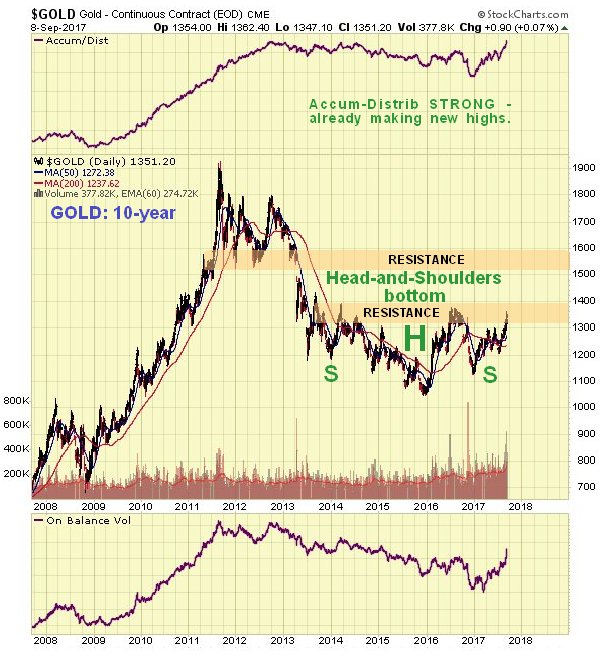 Over the near-term, however, various factors indicate that the probability of a reaction back is high. On the 6-month chart we can see that last week the price rose up to the top of its uptrend channel where a prominent “spinning top” candlestick formed on Friday, with the RSI indicator critically overbought, making it likely that gold will react back at least to the lower boundary of this channel. The overbought MACD and sizeable gap with the moving averages also increase the risk of a reaction. 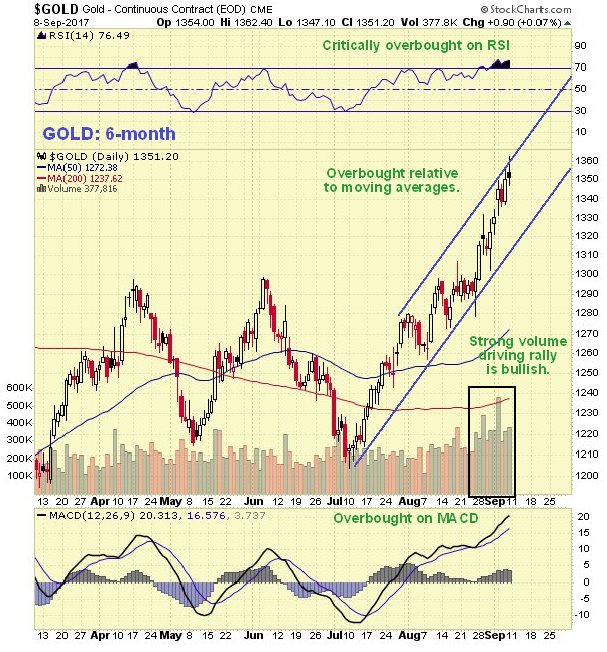 Like gold itself, gold stocks are preparing to break out of a giant 4-year long Head-and-Shoulders bottom. They are still quite a way from having broken out, as we can see on the 10-year chart for GDX shown below, and vulnerable to a near-term reaction on a dollar rebound, that should not see them lose much ground. The big volume on the rally during the 1st half of last year showed that the bottom was in and that a major new bullmarket is in prospect. The formation of the Right Shoulder of this H&S bottom served to correct this strong advance. 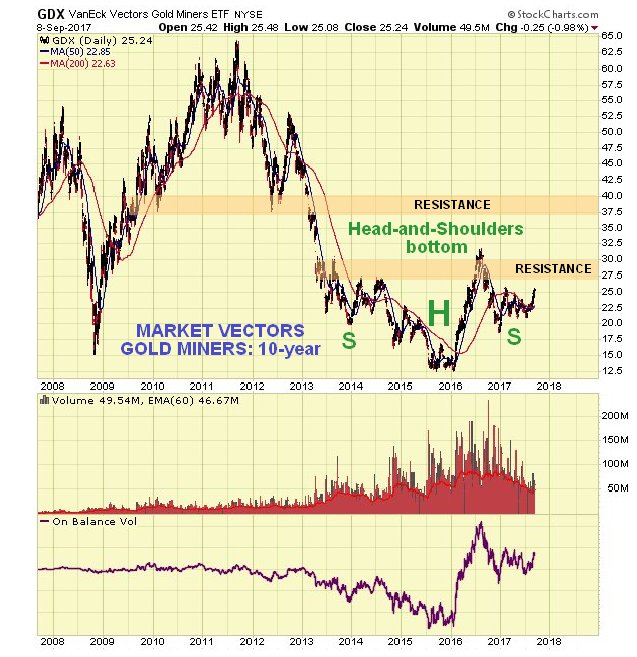 A big reason for gold to react back again soon would a rebound by the dollar, which is made more likely by the fact that a lot of commentators are reading it its “last rites” - it’s not that they are wrong, it’s just that there are a lot of people of one side of the boat now, so they may prove to be wrong short-term but right longer-term.

We will now look at some of the big reasons that the dollar could rally soon. On the 8-year chart for the dollar index we can immediately see one of them – the dollar has now arrived at the lower boundary of a large Broadening Top pattern in an oversold state, and while it is believed to be destined to break down from this pattern in due course, it looks likely that it will bounce of its lower boundary over the short to medium-term to correct the oversold condition before going on to break down later. 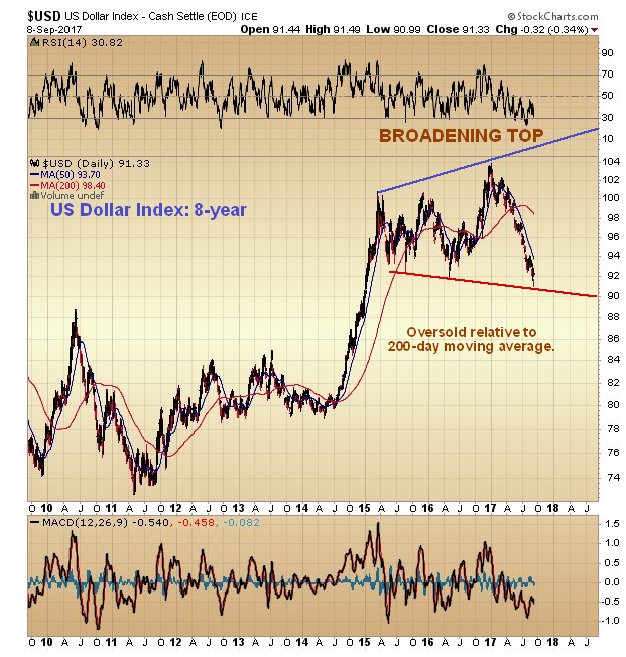 Another important factor suggesting that the dollar is likely to rally short-term is the latest dollar Hedgers chart, which is now quite strongly bullish. On this chart we see that large Commercial Hedgers, who are almost always right, have cashed in nearly all of their net short positions for a nice fat profit, so that they are now at a very low level, and they would be unlikely to do this if the dollar was set to drop much further. On this chart we also have the benefit of seeing what happened to the dollar soon after they did this on earlier occasions. As we can see it usually rose. 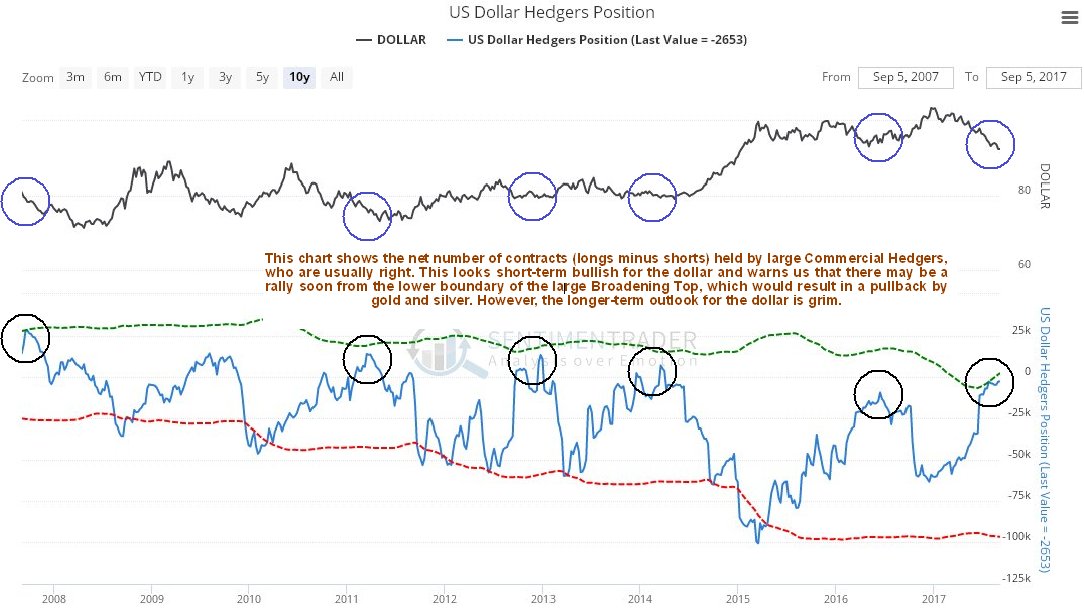 Those who think that the dollar will plunge because Nicolas Maduro of Venezuela has announced that his beleaguered country will stop selling in oil in dollars are likely to be disappointed. President Maduro would be well advised to look up what happened to Saddam Hussein after he proposed doing the same, and we must assume that either he doesn’t know his history, or is tired of being President of a failed State and is contriving a way to be forcibly removed from office.

We have seen how copper, known as Dr Copper because it tends to lead the economy and lead the metals, has been in the vanguard of the recent metals rally. Thus it is interesting to observe on its 6-month chart below how it suddenly dropped hard on Friday having become overbought, which is thought to presage a dollar rebound and a near-term drop by other metals, like gold and silver. 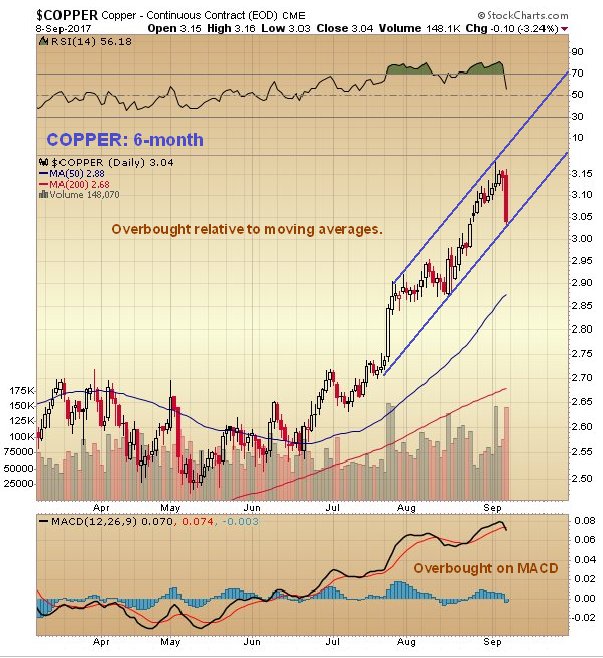 Conclusion: the long-term outlook for gold couldn’t be better with it looking destined to break out from a giant 4-year long base pattern to enter a bullmarket that promises to dwarf the last one, as the dollar collapses and China (and possibly Russia and other countries) backs its currency with gold, and the cryptocurrency Ponzi scheme implodes, with the liberated funds (or what’s left of them) flowing into gold and silver. Cryptos got a shock late last week when China reportedly revealed that it was set to close local exchanges. From China’s standpoint cryptos are a needless risk to their citizen’s capital, and represent potential competition for their future gold-backed Yuan, albeit not for any intelligent person, and are a nuisance that they can deal with simply by banning them, which as a Command Economy that can ignore criticism, they have the power to do. Near-term gold is looking set to react back as the dollar bounces off support with tensions over N Korea easing as the US has no choice but to accept that N Korea has graduated to the nuclear club, even if it cannot be described as one of its august members.