We will start this update by looking at gold’s price measured against various important currencies. These long-term charts quickly make clear that gold is in a major bullmarket, which is another way of saying that these currencies are losing purchasing power. 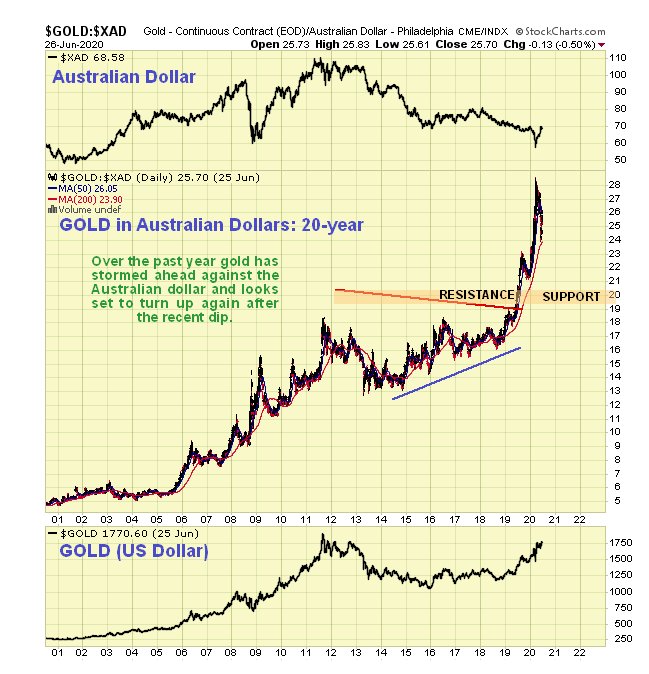 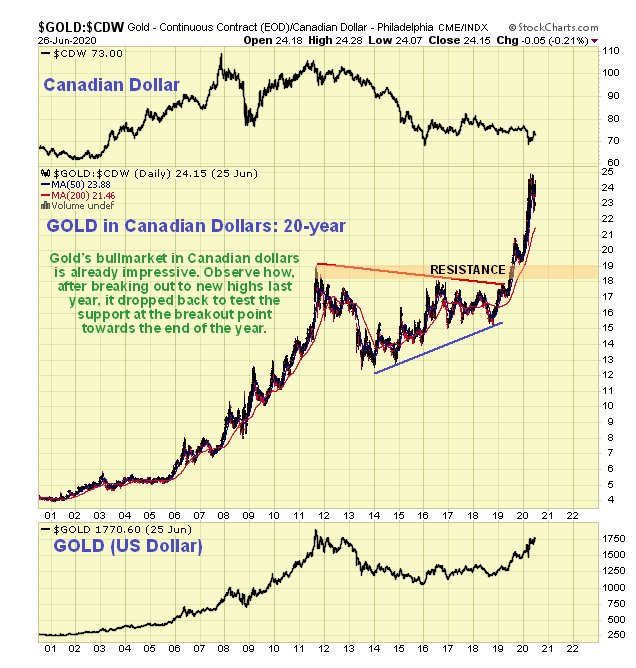 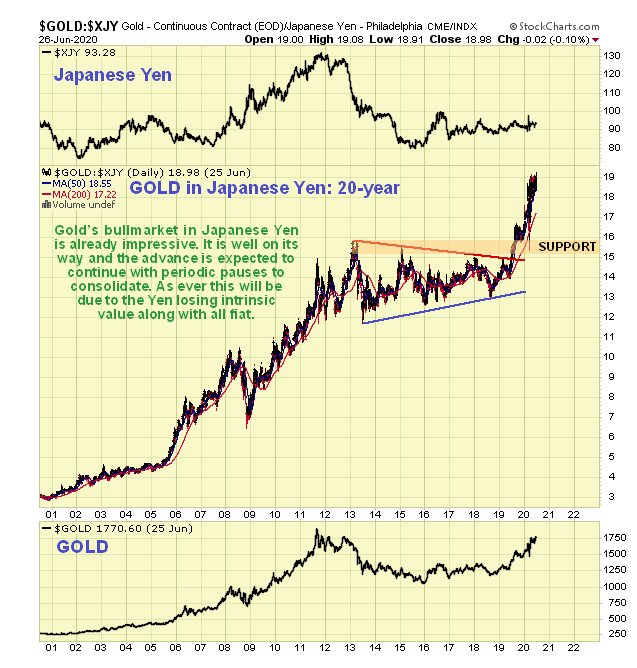 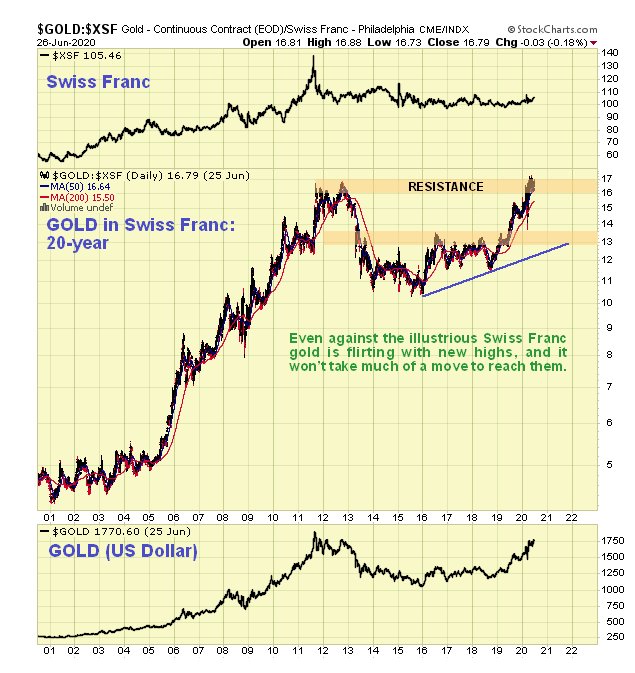 So we should clearly not allow ourselves to be fooled by gold not breaking out to new high against the US dollar, especially given the Fed’s recent extreme profligacy involving the creation of trillions of dollars for the purpose of backstopping the credit markets, bailing out favored crony corporations, and paying countless millions of newly unemployed people to sit at home twiddling their thumbs, none of which can be classified as productive use of the money. All this extra money means that eventually there will be a lot more money chasing the same, or rather a reduced supply of goods and services, now that the economy is a lot less productive thanks to lockdowns and closures etc. The only reason that the Fed has been able to get away with it so far without rampant inflation is because the economy is dead, so there is no money velocity, but this money will find its way out eventually and when it does we will be looking at robust inflation trending towards hyperinflation. Needless to say this will lead to gold appreciating dramatically against the dollar, as the dollar’s purchasing power shrinks.

Bearing all the above in mind it is thus interesting to observe that even though gold has not (yet) broken out to new highs against the US dollar, it has also done well in this currency over the past 2 years and is getting close to doing so. Therefore it is not too difficult to deduce that with the creation of new dollars ramping up exponentially, it is only a matter of time, and not too much at that, before gold does go on to make new highs against the dollar, a development that will usher in a period of accelerated advance.

Gold in US dollars… 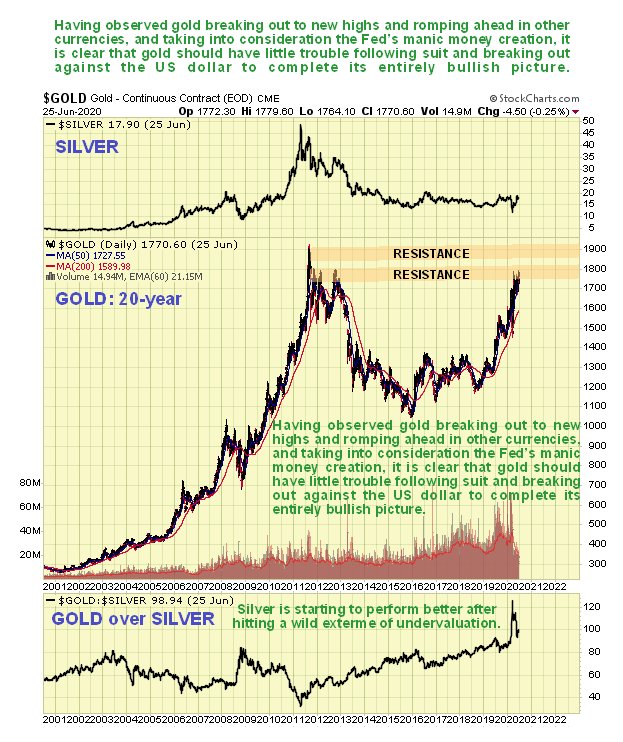 This is a good point to add Larry’s latest gold chart showing the gigantic Cup pattern, which points to an explosive move up soon, even if we see a brief break lower before it. As Larry himself points out: “A Cup & Handle formation will need to carve out a Handle to be complete”, however, the way things are deteriorating it is hard to imagine gold hanging around for more than a short time marking out a Handle to complement this Cup. If you want to send feedback to Larry about this, his email address is on the chart. 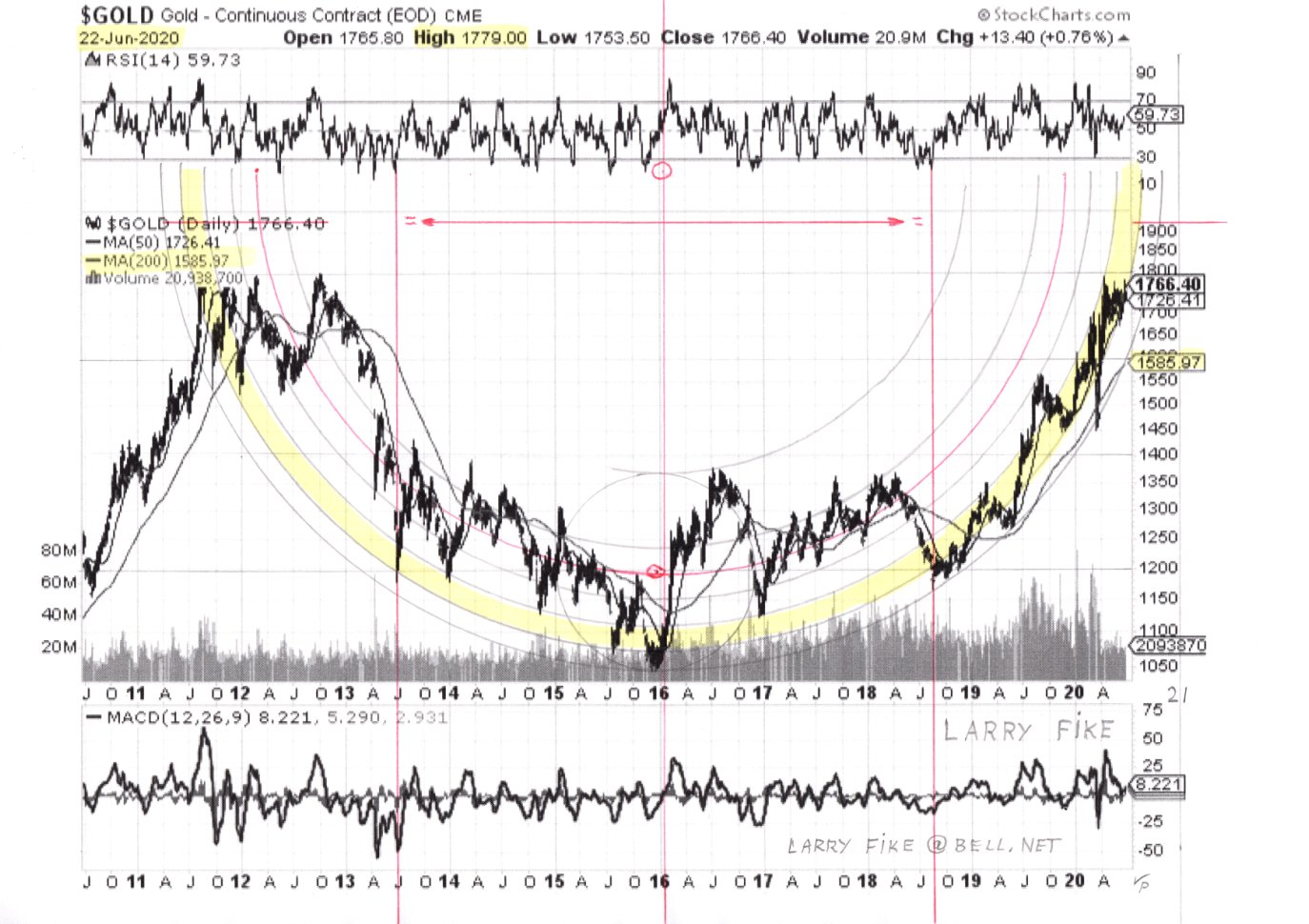 To those who say “Gold will never go up much because “they” will not allow it to, because it reveals their fiat money scam to be increasingly defunct, and they will suppress it with paper shorting on the Comex etc.” I say this: the fiat money system is already breaking down as we head into the end game of a hyperinflationary firestorm that will render most currencies worthless. Astute investors who understand the power of gold and its intrinsic value know this, and are not fooled by games on the paper markets. If they continue to try to suppress the price of gold on the paper markets, all that will happen is that the already large premiums for physical metal will grow wider to the point where it becomes untenable, with the paper markets increasingly perceived as a manifest absurdity that will be bypassed by investors who will go straight to physical which will skyrocket in price before becoming unobtainable, and the same will happen with silver. This process has already started.

Even though we have observed that gold is in a major bullmarket that is set to accelerate dramatically as we trend towards hyperinflation, does this mean that it is immune to potentially sharp corrections? – no, it doesn’t. As we know, the stockmarket has lost all touch with economic reality. The economy is flat on its back and comatose, yet the stockmarket has been going higher and higher until the NASDAQ actually made new highs a week or so ago. The reason for this is the Fed creating trillions out of thin air to throw at pumping it up. Therefore, anytime the Fed fails to pony up with the additional liquidity that the market thinks is its due, it is going to throw a nasty tantrum, like it did in March, and we should all be aware that the Fed may actually do this by design, so that it can smack the market down and then move in and scoop up more assets on the cheap. The charts show that we are right now at a time where that could happen and if it does the PM sector is likely to get taken down with it, as happened in March, in accordance with the old “baby and the bathwater” adage. Should this happen it will be viewed as presenting an outstanding opportunity to move in acquire more PM sector assets, because the Fed is likely to come riding to the rescue once more with a torrent of liquidity.

There are many who think that the Fed’s taking full advantage of the dollar’s reserve currency status to create countless trillions of new dollars will nevertheless cause it to lose value in a big way against other currencies, but a mitigating factor is that the Fed is not only flooding the US with extra dollars, it is flooding the whole world, by pumping them into countless other Central Banks around the world which it controls in an act of economic colonialism. So pretty much all currencies are set to drop in lockstep. The main point is that the stagflationary depression that the world has now entered will impel governments everywhere to create exponentially more and more money in an effort to maintain liquidity and keep a lid on interest rates. This is why gold MUST rise in price to reflect the loss in value of fiat, and it will go further than that as investors will eventually flock to gold as the last safest place to put money where it will retain its value (stockmarkets may be rising nominally but losing value in real terms).

Gold, the stockmarket and the dollar are all at a critical juncture where they could break in either direction. What this usually means is that the markets are waiting on some fundamental development like, for example, whether the Fed is going to divvy up another trillion or two to throw at driving the stockmarket still higher, and maybe at the same time throw a bone to the 40+ million unemployed in the form of say $100 billion extra for checks to spend on flat screen TV’s. On gold’s 2-year chart we can see that it has been struggling to make further progress within its uptrend over the past several months, and although in position to break higher, is vulnerable to a smackdown if the stockmarket should suddenly plunge. From a trading standpoint what would be ideal here would a short-term selloff that provides a buying opportunity ahead of the seasonally strong period in and August and September. If the stockmarket takes a hit it could do what it did in March. 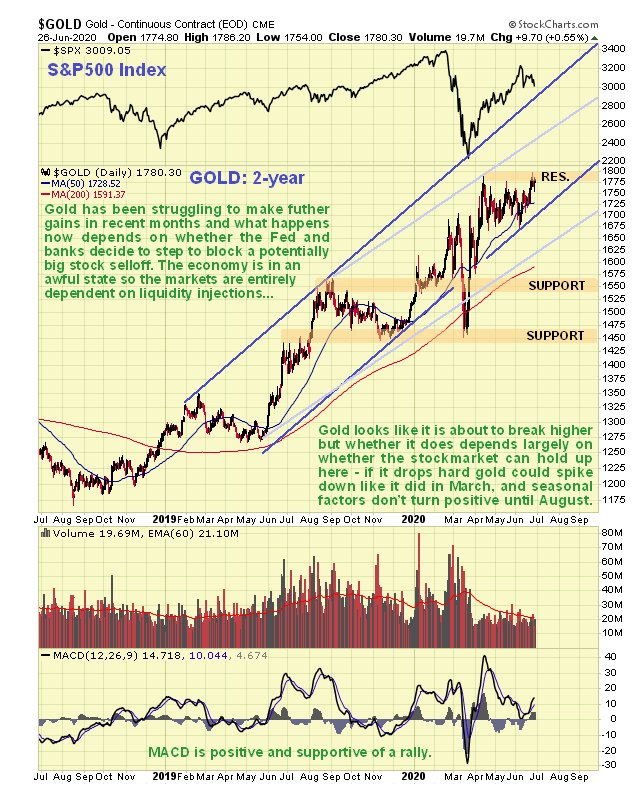 The 6-month chart looks positive, with the price well placed to break higher after a trading range from mid-April that has allowed time for its earlier oversold condition to unwind. Moving averages and the MACD are supportive of an advance from here. As mentioned above though, a stockmarket selloff could abort this scenario with a rude reversal and steep drop. 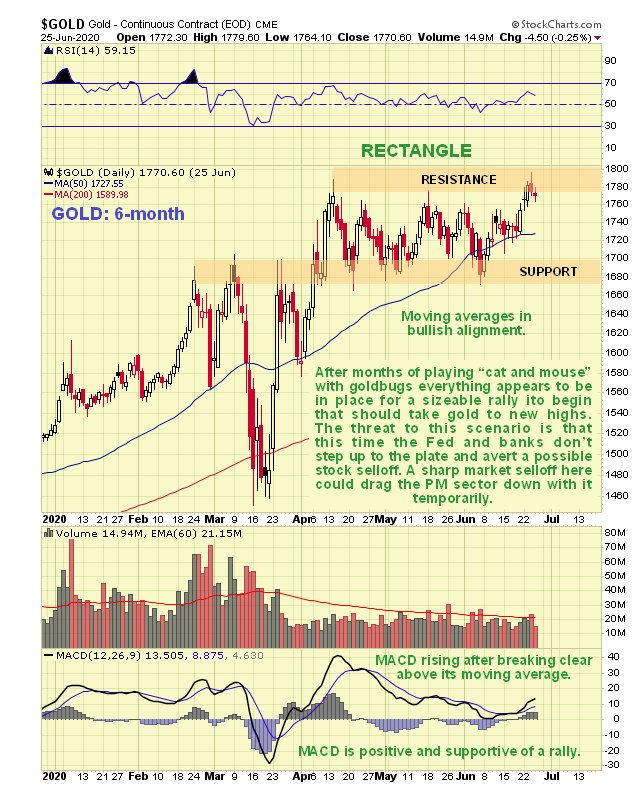 Turning now to the dollar, we see on the 3-year dollar index chart that it has made no net progress for almost 2 years, having been stuck within a shallow uptrend trading range. The spike in March was due to the specter of a deflationary implosion which was banished by the Fed boldly riding to the rescue with trillions of crisp new dollars. The recent drop caused by the Fed’s manic money creation, found support in the 95 area. 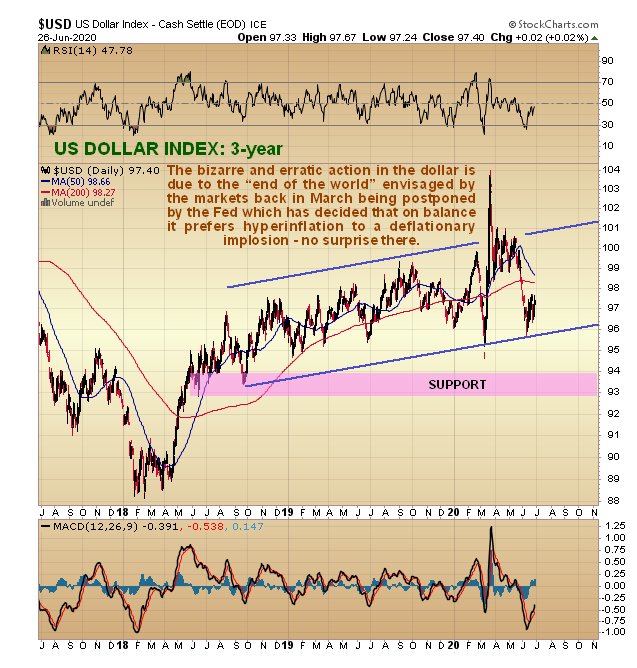 Like the stockmarket and gold, the dollar is evidently waiting on some development that could result in it breaking either way, depending on what happens. This is why the fairly tight range of the past 2 weeks or so shown on the 6-month chart could be either a bear Flag or some kind of intermediate base pattern. 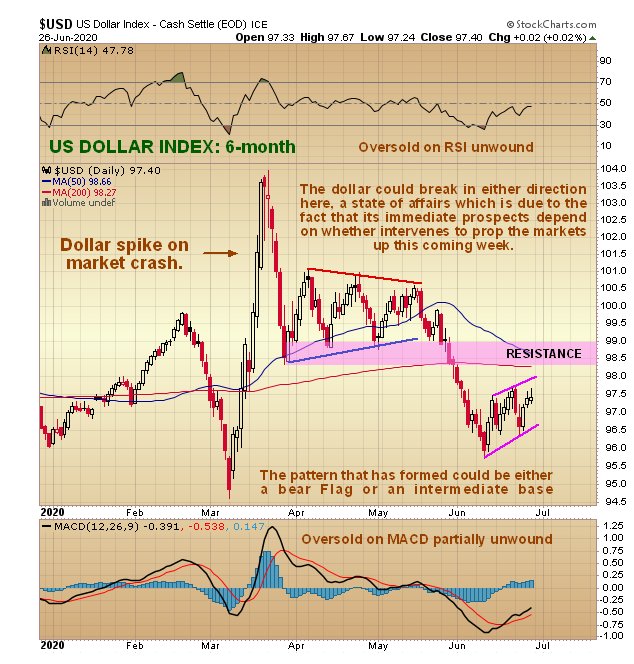 The conclusion to all this is that gold is in a powerful bullmarket which is expected to accelerate. Near-term, while it looks set to take off higher and should do if the stockmarket holds up, it is vulnerable to a potentially sharp correction if it doesn’t which would be viewed as a buying opportunity for the sector.

Finally, I want to take this opportunity to recommend that you do whatever you can you make sure that you have at least some physical gold and silver in your possession. Very bad times are headed our way and most Americans have no idea what’s coming down the pike. If you have to pay a premium then pay it, because the premiums are only going to get bigger with passing time, and eventually physical metal will be very hard to come by. I particularly like silver for 2 reasons – one is that it is still very undervalued relative to gold, and the other is that you are less likely to be hit over the head or shot when you try to trade it for goods. Silver coins of varied denomination are viewed as ideal. Gold buried in vaults thousands of miles away may sound like a great idea, but when things get really bad, you may not be able to get to it, or it to you. If you have sufficient resources it’s still a good idea, but you still want a quantity of physical in your possession that you can trade, and of course the means and willingness to defend your stash from marauders.

Here is an important and timely video by Jeremiah Babe entitled US ECONOMY WALKING DEAD. Although directed at Americans it is considered important viewing wherever you are, because when America goes down the shockwaves will reverberate around the world.