We now have a very rare setup for gold which is in position to “go ballistic” as the dollar collapses. The dollar is being intentionally destroyed by the Fed which is creating dollars in vast unprecedented quantities in order to buy up distressed assets on the cheap and in order to pave the way for the new “digital dollar”. We are in the last stages of the fiat endgame where money creation goes vertical, quickly leading to it becoming worthless, as happened in Venezuela and Zimbabwe, and of course hyperinflation is a great way to pay off debt, because you can do so with worthless currency.

There are two worries that have been vexing would be investors in the Precious Metals sector in recent weeks. One is that gold and silver won’t rise much because big banks like J P Morgan will cap it by dumping onto the paper market. The other is that Cryptos are “stealing gold’s thunder” and siphoning off funds that would otherwise go into the Precious Metals.

Starting with the first worry. The key point to keep in mind is that gold is “real money” and this being so the idea that a currency like the dollar can collapse towards zero and gold won’t go up because the banks will be selling it on the paper market is both absurd and ridiculous – what would happen is that an untenable massive gap would develop between the price on the paper market and the price on the physical market, and the paper market would become rapidly irrelevant and obsolete, so we don’t have to worry about that. In fact, to the extent that they are actually suppressing the gold price, all they are doing is creating a “pressure cooker” effect that will lead to a massive upside explosion, but you certainly don’t want to wait for that to happen before you take positions across the sector.

With respect to cryptos “stealing gold’s thunder”, one reason that cryptos are going ballistic now is that the NWO (New World Order) plan to use cryptos as the vehicle to pay the Universal General Allowance (UGI) to the dispossessed serfs who are permitted to live in their new system. In order to qualify for this they will have to be fully compliant with all the dictates of their Masters which will of course include being vaccinated. Catherine Austin Fitts makes some very interesting points about what this will entail in her video Planet Lockdown. Apparently, and of course unknown to the average clueless clod lining up to be vaccinated, the vaccines are a key step on the road to transhumanism, the merging of man and machine, where the vaccines, or later booster shots, include elements that will permanently hook up and communicate with the extensive global 5G grid currently being rolled out, eventually enabling complete control of the individual who will be subject to penalties for any non-compliance, however this should be less of a problem with passing time as the person merges with the matrix and loses his or her individuality. Catherine Austin Fitts describes the vaccine implants as an “operating system” which seems logical given Bill Gates’ history. Knowing this you will readily understand why it makes sense to avoid being vaccinated for as long as possible. If the vaccinations are anything like Microsoft operating systems, they will have a lot of glitches, requiring a lot of booster shots (forced updates / patches), but whereas you might only suffer the “blue screen of death” with a computer operating system, it could be the “real thing” with the vaccine, but who cares, the world’s overpopulated, right?

While cryptos may be screaming higher for the reason given above, there is also a misplaced belief that you are “outside the system” when you buy cryptos, but you won’t be outside the system if they decide to “pull the plug” on the internet, a possibility raised in this dystopian short film Dark Winter, which they may do because the internet is the only way to find out the truth about what is going on. The NWO are believed to be developing and perfecting their own cryptos, and when it suits them they will simply outlaw or block all of the others, or make ownership of them punishable by a jail sentence – don’t forget they are above the law and can do anything they like, like the current lockdowns which are illegal. At least with the Precious Metals you can physically own them and they will not disappear if banks close their doors or the internet is taken down.

Starting with the 13-year chart, we see that gold is in the process of breaking out of a gigantic Bowl pattern. This is a very unusual setup that could slingshot it vertically higher soon. Gold has already punched through its 2011 highs last year, but has since reacted back below them which is thought to be a normal reaction prior to renewed advance. A big concern with a pattern like this is that it could stall out for a long time marking out a Handle to complement the Cup before continuing higher, but this doesn’t look likely on this occasion because the dollar looks like it is on the verge of collapse with the Fed set to continue attacking it relentlessly. 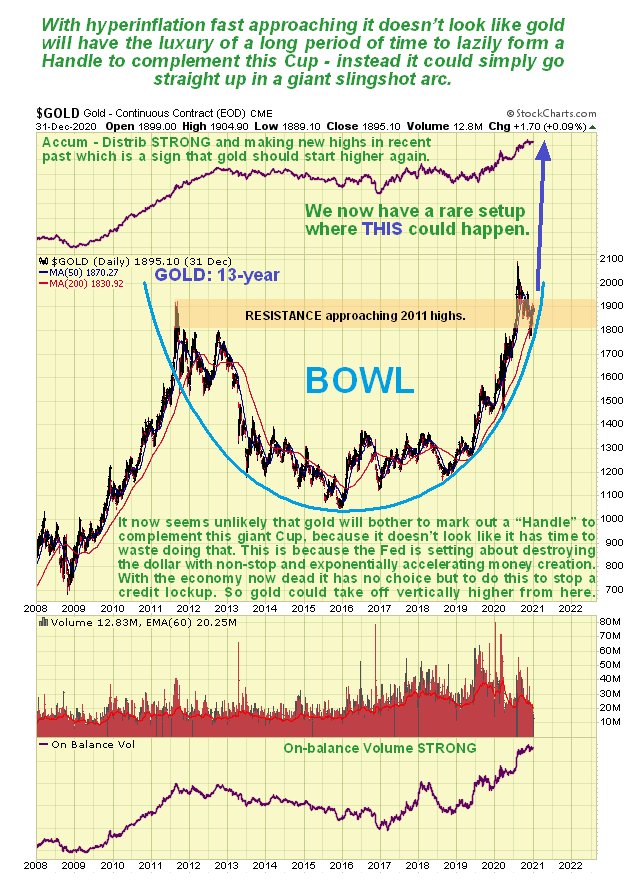 On the 6-month chart we can see gold’s corrective downtrend from its highs of last August in detail. Right now it is at the upper boundary of this downtrend and so it could react back again. However, various factors suggest that it will soon get on with it and break out of this downtrend, which should lead to a vigorous ascent. If it should react back somewhat short-term it will simply be viewed as another buying opportunity. 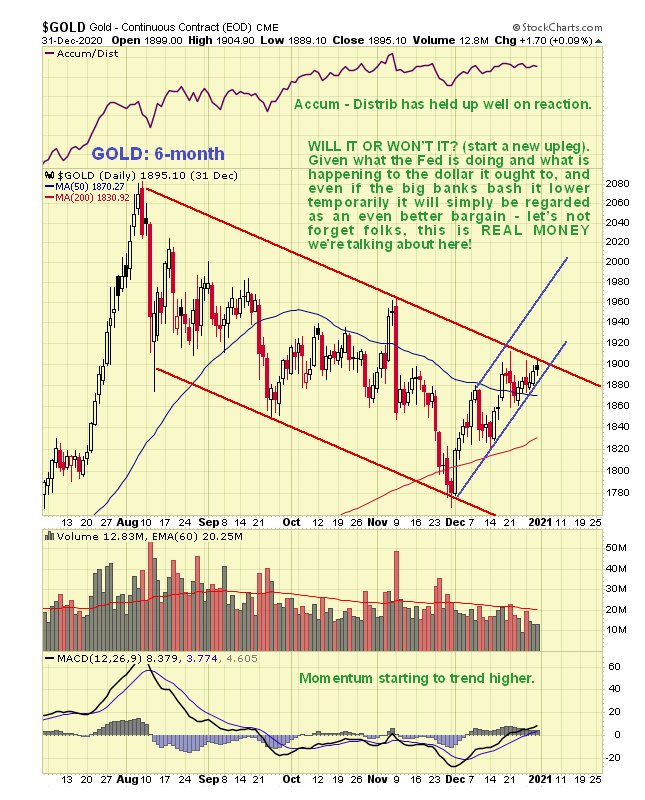 On the 1-year chart for GDX we can see that stocks are in a rather similar situation to gold itself, with the downtrend from the August high still in force, but various bullish factors coming into play that make an upside breakout likely soon, in particular the now tight bunching of the price and its moving averages and the fact that GDX is now in a zone of strong support. 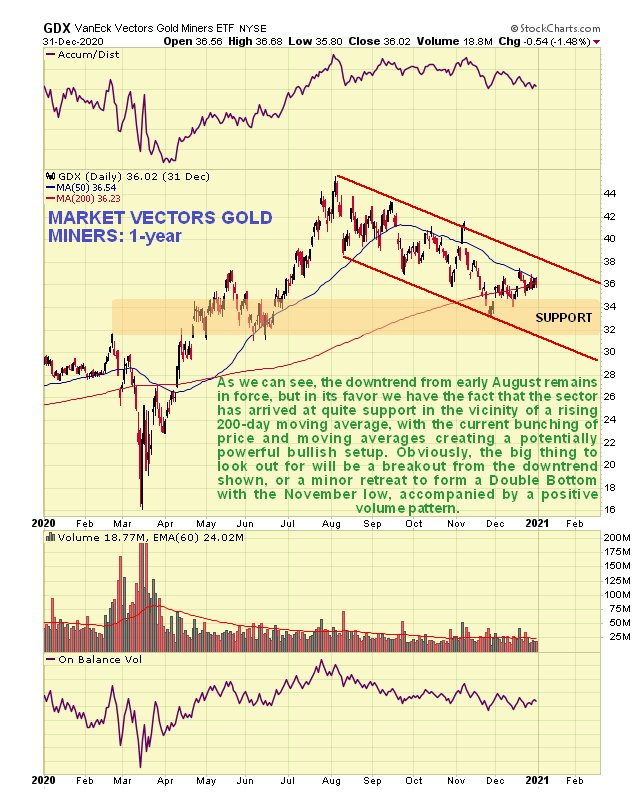 The Gold Miners Bullish Percent index shows that sentiment is now much better having dropped from 100% bullish when the correction started to its current level with less than 50% of investors bullish, so there is certainly room for a significant uptrend to get started. 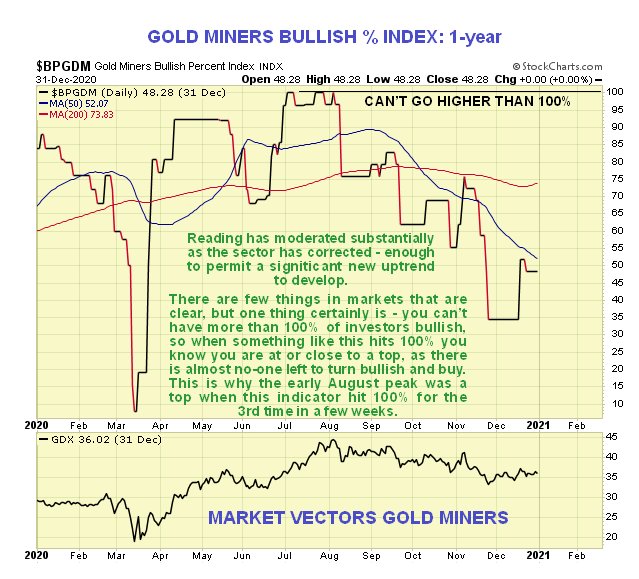 The dollar’s charts look frightful, which is hardly surprising considering what the Fed is doing to it, with the Fed’s balance sheet having doubled in less than a year and looking set to continue to expand at an ever greater rate. On the 10-year chart for the dollar index we can see that as recently as November it broke down from a giant Diamond Top and it looks like once it breaches the last ditch support in the 88 – 90 zone, it could go into freefall. If this happens it can be expected to “light a fire” under the Precious Metals sector. 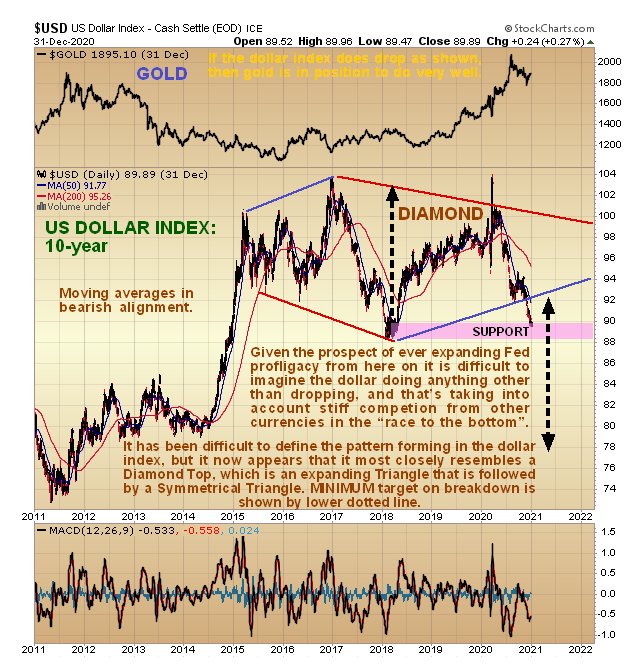 The 6-month chart for the dollar shows an entirely bearish picture with the current severe downtrend that started early in November remaining in force. 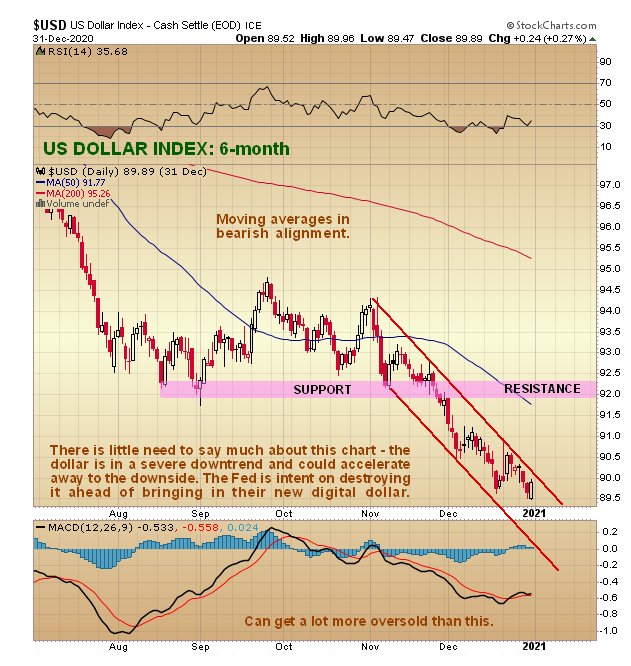