Gold Market Update - SAUCER BOUNDARY SET TO LAUNCH IT HIGHER.....
Monday, January 10, 2022
GOLD AT CRITICAL JUNCTURE - interim update...
Sunday, April 04, 2021
GOLD LOOKS GREAT HERE...
Sunday, December 06, 2020
Before a big move in an asset starts the market is often bored with it, and its attention is elsewhere. This would appear to be the case with gold but as we will now see it is at just such times that one can make investments that will soon pay off handsomely. Gold’s latest 13-year chart is very useful as it reveals that the reason gold has been going nowhere, apart from the obvious one that it has been battling dollar strength and actually holding up quite well, is that it has been waiting for the giant Saucer or Bowl base pattern boundary to catch up with the price, and most significantly we can see that it has now about done so, which means that the time has arrived for renewed advance. The consolidation / reaction of the past 17 months occurred in the vicinity of the 2011 highs where there is of course resistance, so it is not surprisng to see it mark time for a while here, but it should be noted that against other currencies gold is already well clear of its 2011 highs as we will see later when we look at the chart for gold in Japanese Yen. 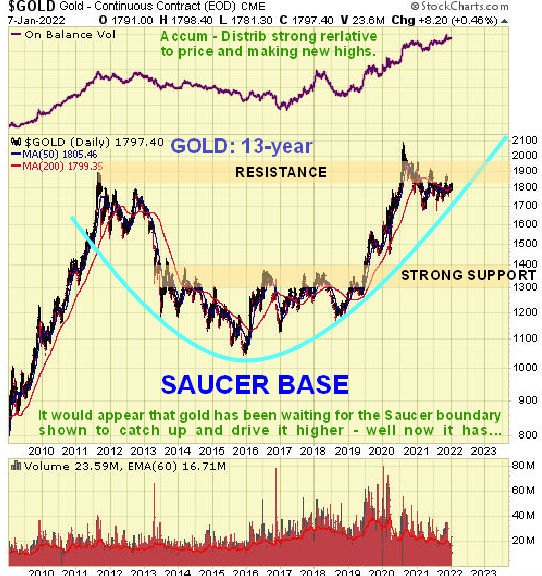 On the 3-year chart we can see why an upside resolution of the current standoff looks very likely. Following gold’s vigorous advance from mid-2019 through August last year a correction was in order and it did correct back into the Spring of last year. Then it stabilized above a support level with a base pattern forming which now looks like it is approaching completion. The relentless uptrend in the Accumulation line shown at the top of the chart, which has continued to make new highs even as gold corrected back, is of course bullish and implies that the current pattern will resolve with a breakout into a major new upleg. This should hardly be surprising given the amount of money creation going on that must drive rampant inflation. Only in the event of a massive pan selloff caused by the Fed suddenly curtailing debt creation would this bullish pattern abort, and that doesn’t look likely. The current tight bunching of price and moving averages, with averages swinging into better alignment, is also conducive to a new upleg developing soon. 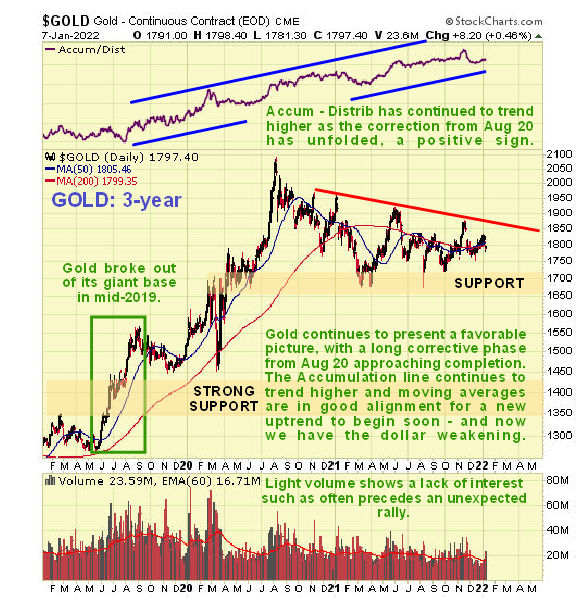 After the last Silver Market update was posted, on this occasion before gold about a week ago, there was a “flash in the pan” selloff, but as we can see on gold’s latest 6-month chart, it didn’t amount to much and brought the price back down to the curved trendline shown which is not far above the Saucer boundary shown on the 13-year chart and a rather bullish little candle formed there on Friday and curiously the Accumulation line advanced to new highs for recent weeks even as the price dropped last week, a bullish sign. 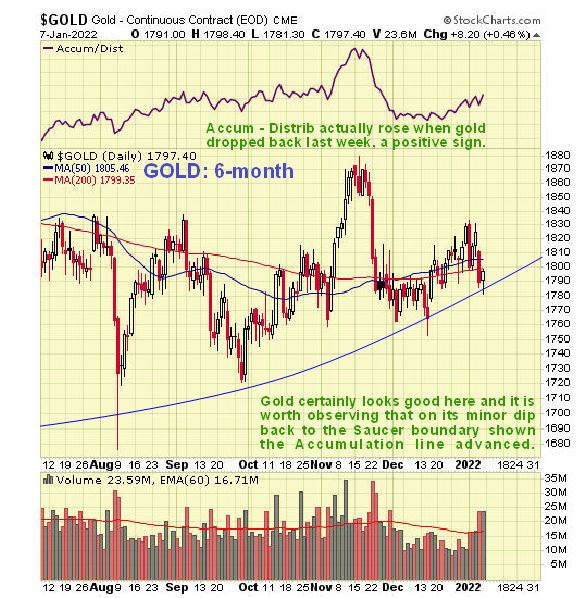 If gold looks set to turn higher again, then what about gold and silver stocks? A quick glance at the latest 13-year chart for GDX, which serves as a proxy for gold stocks, shows that it too looks very well placed to turn higher following its reaction back to strong support at the upper boundary of a giant complex Head-and-Shoulders bottom… 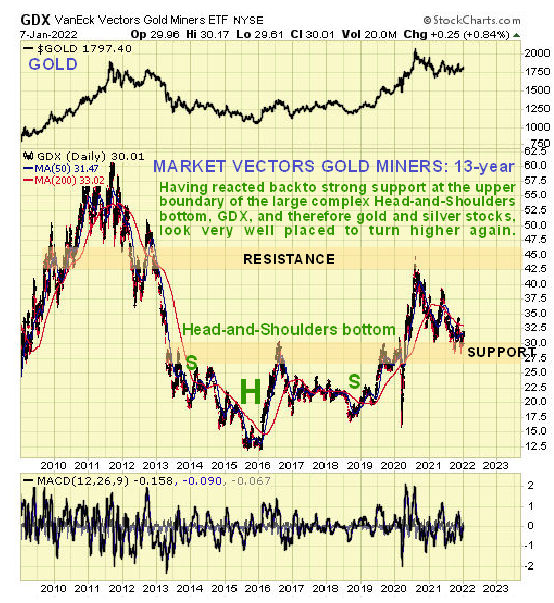 A factor holding gold in restraint in recent months, despite the upsurge in inflation, has been the relatively strong dollar whose advance of recent months can be seen on the 3-year chart for the dollar index below. While there is no immediate sign of an end to this uptrend we can see on this chart that the dollar is running into significant resistance here that could send it back down again, which would fit with what we are seeing on gold’s 13-year chart that shows it ready to advance from the Saucer boundary that has about caught up with the price. 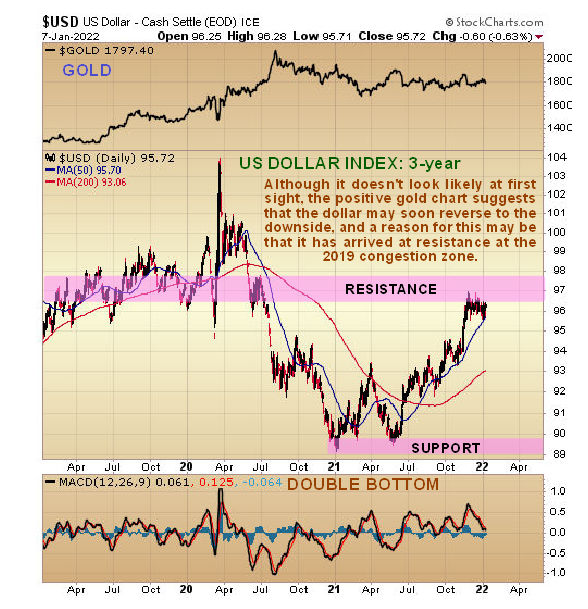 Finally, to the extent that seasonal factors for gold are very favorable this month (even better for silver), gold should “have the wind at its back” in coming weeks as the seasonal chart below shows… 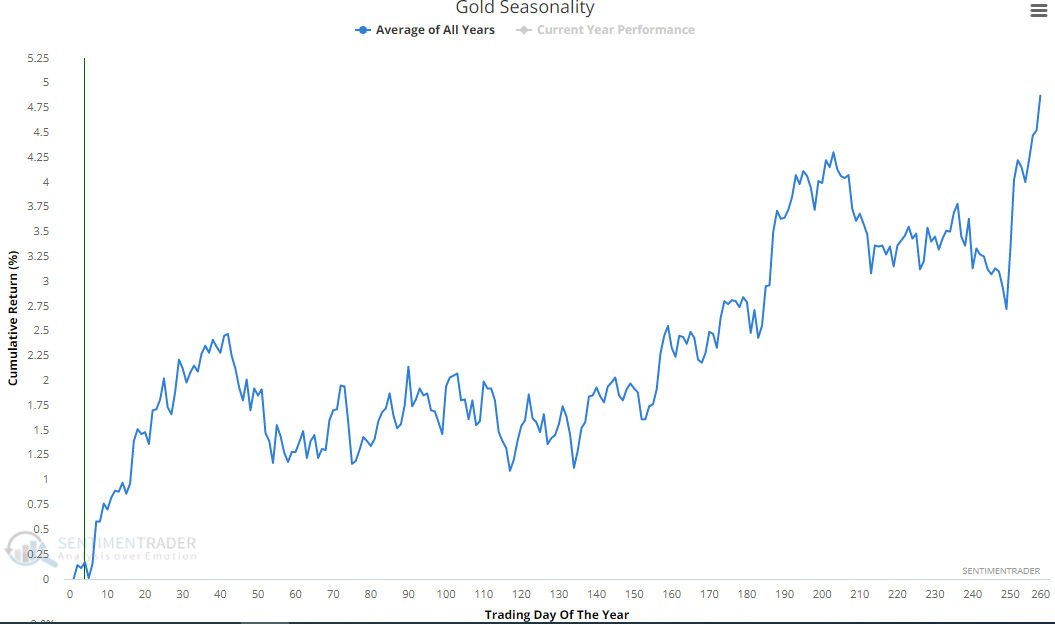 Chart courtesy of sentimentrader.com
The conclusión is that this is a very good point for gold to turn higher again, and more than that it is very well placed now to launch into its next long awaited major upleg, and this being the case, this looks like a very good time to complete purchases across the sector in gold, silver, ETFs if desired and of course a range of better gold and silver stocks.
End of update.