COPPER CALLS GOLD BOTTOM ON TRUMPHORIA SURGE...
Sunday, November 13, 2016
Last week was highly unusual. Despite not winning the popular vote, Trump won more seats than Hillary Clinton and ended with a clear majority, contrary to what opinion polls projected. One of the more bizarre spectacles by the end of the week was that of the leading protagonists in the race exchanging niceties, after weeks and months of slagging each other off. To remain true to form, what Trump should have said to Obama, in front of the cameras, when he met him at the Oval Office, was “See, despite you telling the electorate for weeks that I was unfit for the office of President, the people have voted for me to be the 45th President of the Union. Now give me the keys and the folders – and I don’t expect to see you here when I return in January.” However, what transpired was very different because nothing was at stake, so they returned to vacuous diplomatic niceties for the cameras. The reaction of the markets to the election was quite dramatic. Seemingly infused with the idea that Trump would live up to his election promises and make everything right with a sweep of his hands, the markets surged and the S&P500 index broke out upside from its bearish Dome pattern. Gold and PM sector investments were dumped in favor of the broad market. Copper rocketed higher at the prospect of the proposed massive infrastructure spending. There is just one problem with all this; politicians of all stripes have been digging a massive crater under the economy for decades now, running up astronomic deficits and endlessly expanding the money supply and also creating a towering derivatives overhang, as well as outsourcing jobs to other countries and wasting fortunes on overseas wars, so Trump is not going to succeed in sweeping these problems away with a wave of his hands, and the talk of doing so was to a large extent electioneering talk, as the population at large will believe what they want to believe. For example, if Trump wants to rebuild the crumbling infrastructure of the country, which should have been done with the money the Neocons diverted to their empire building please Israel foreign military misadventures, the only way he will have sufficient funds will be thanks to helicopter money, and that means inflation which will drive gold and silver higher. Let’s suppose that Trump at least partially goes ahead with his grandiose plans – what does it mean? Well, it means helicopter money, because there’s no other way to pay for it. This could indeed drive the stockmarket higher, which is what last week’s breakout may signify. However, it will also mean inflation, so gold and silver should bottom soon and turn higher. While copper may continue in a bullmarket action in it on Friday indicates temporary burnout, so it should now react. We’ll now look at the charts, starting with the broad market. The 1-year chart for the S&P500 index shows that it has broken out upside from its bearish Dome pattern, which was a bullish development, provided that it can succeed in holding above the Dome. 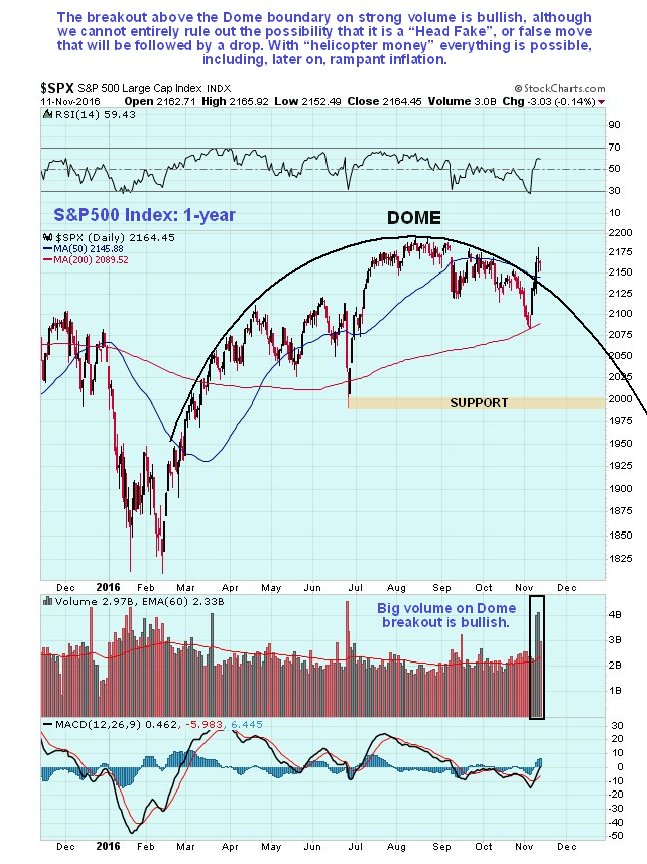 Copper, which was already accelerating higher before the election, went into a parabolic ramp after it, culminating in a spectacular example of a bearish “shooting star” on Friday, marking a top, especially as it occurred on huge volume. This is not to say that copper is not now a bullmarket, but this action indicates an imminent period of reaction / consolidation. 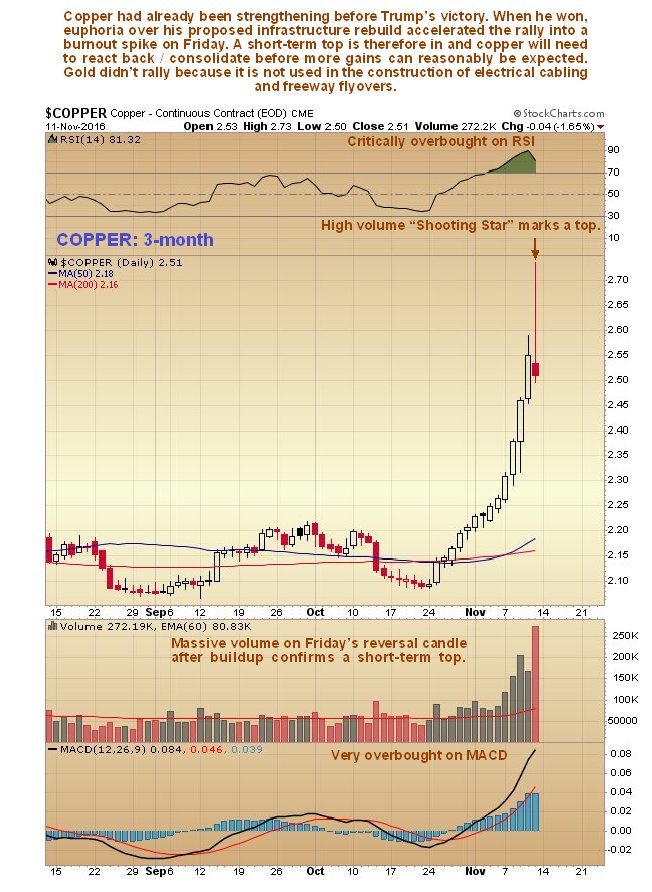 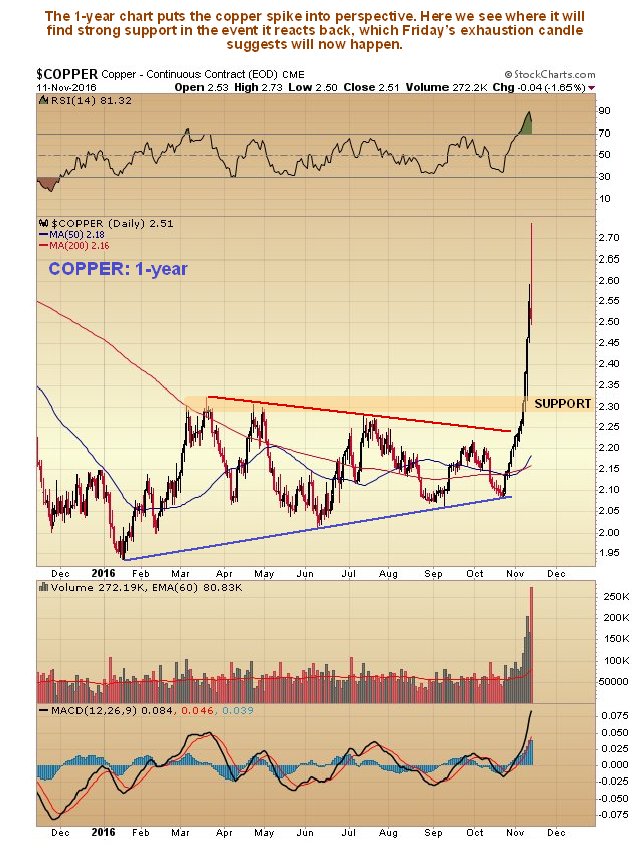 Gold was dumped as funds flowed out of it and into the stockmarket, as Trumphoria prevailed – a party that could end with a nasty hangover, as ideals and dreams confront the ugly reality of crippling debt. When it does, and it could well be soon, this money will start flowing the other way – back into gold and silver. On gold’s 1-year chart we can see that it is already close to arriving back at a zone of strong support that could turn it higher again. 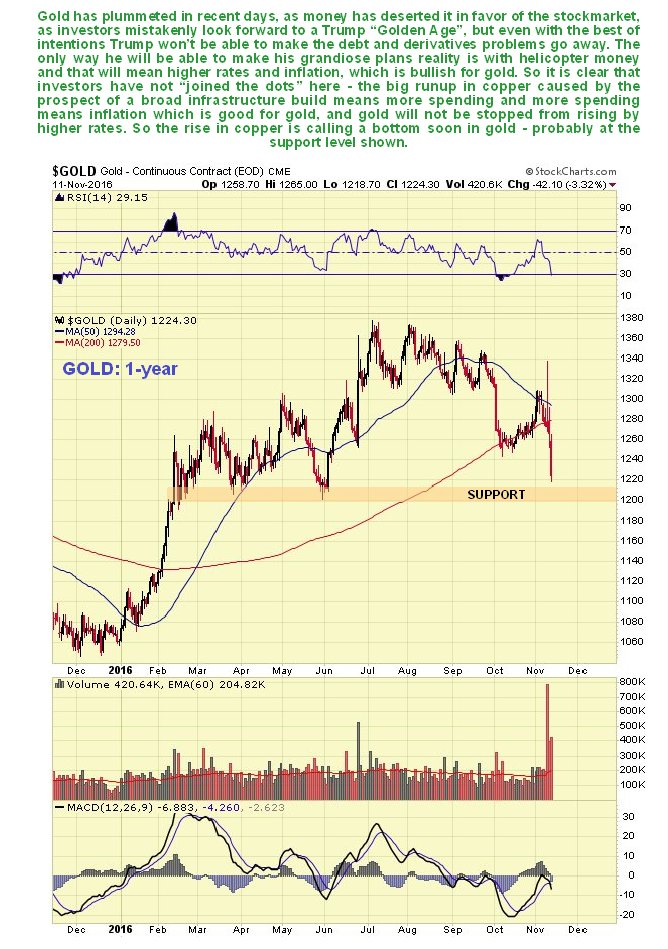 The 3-month chart makes plain how dramatic was the gold turnaround during the election night and its subsequent plunge below a still rising 200-day moving average. This and the high volume are signs of panic suggesting that it will turn up again soon. 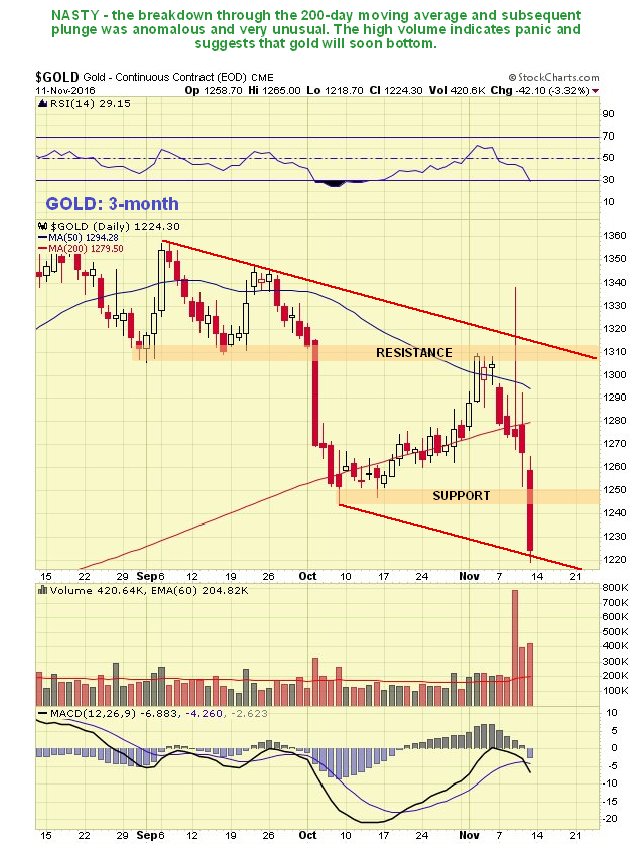 Silver held up well until Friday, when it finally buckled and caved in, suffering a heavy drop of over 7%. This hasn’t carried it below the nearby support above $17, however, so far, and gold and GDX charts suggest that this support may hold. If it doesn’t it is likely to drop to the next support level in the $16 area. Again, action in copper suggests that silver will bottom soon. 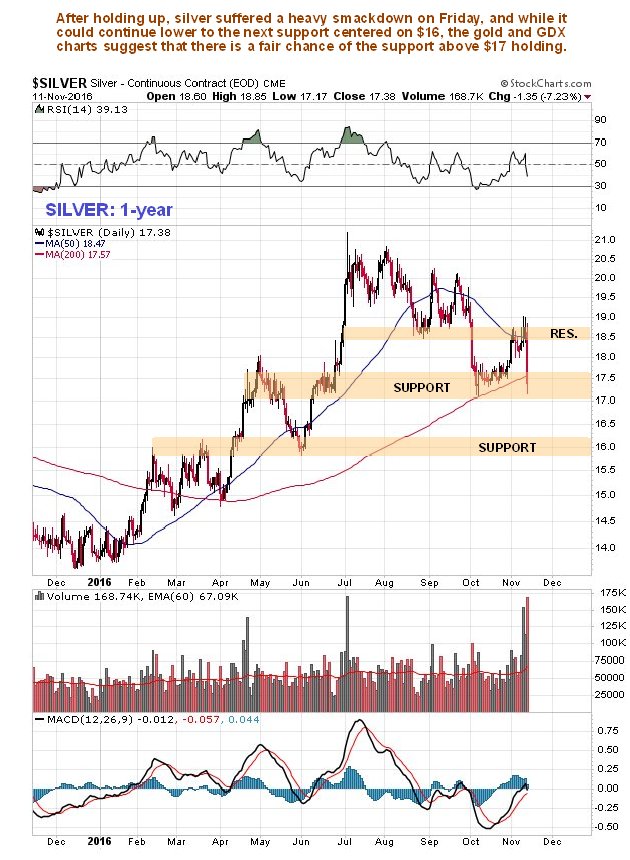 Gold shares got trashed on the fall in the metals, but they are already back in a zone of strong support, and viewed as a buy again here. 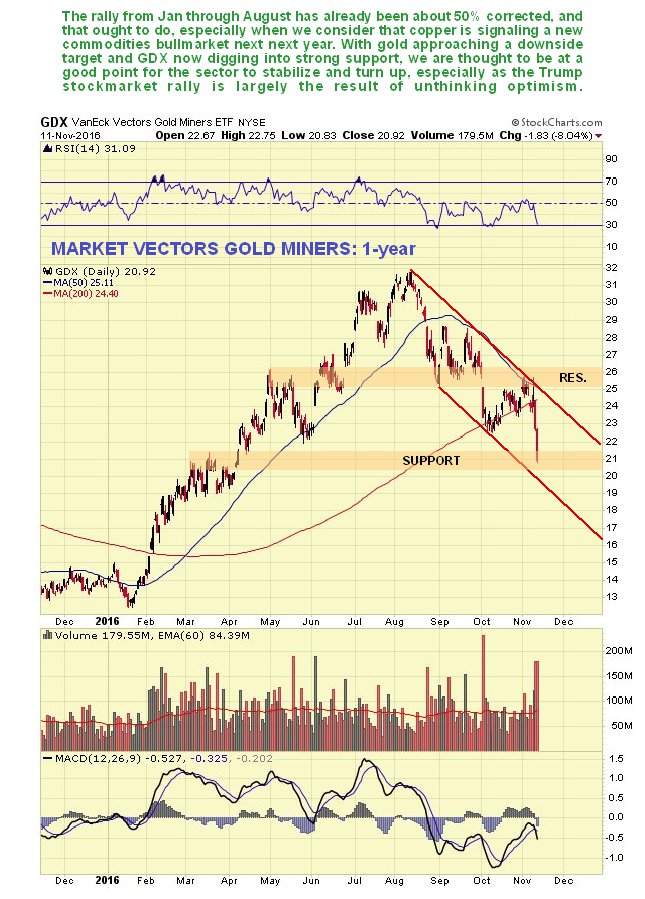 We will end on a positive note for gold and silver. Copper is not called Dr Copper for nothing. Even though it is showing signs of short-term exhaustion, it is also clearly in a bullmarket phase, which means that economic activity should pick up. This can only happen if helicopter money becomes a central plank of policy going forward, and if it does we are likely to see a general commodity bullmarket that includes gold and silver as inflation ramps up. End of update.
Posted at 1.00 pm EST on 13th November 16.