SCIENTIFIC METALS update...
Thursday, April 27, 2017
SCIENTIFIC METALS update...
Monday, April 24, 2017
SCIENTIFIC METALS CORP update...
Wednesday, April 12, 2017
An Email alert was sent out yesterday about half an hour before the close with the part about Scientific Metals reading as follows… “On a brighter note we have a good profit in Scientific Metals (STM.V) which we bought back into on Monday morning at the open, and is now up 32% with huge volume yesterday and today. After 3 sizeable up days and a warning candle appearing today, it is considered best to TAKE PROFITS IN THIS AHEAD OF THE CLOSE TODAY and await developments.” Scientific Metals stock dropped back further into the close, ending the day with a bearish “shooting star” candlestick on huge volume. This of course is a sign that it has probably peaked, for now. On its 6-month chart below we can see clearly see this development and it how caps a very positive week thus far for the stock, which we bought back at the open on Monday morning. We can also see that there now exists a gigantic gap between the price and its 50 and especially its 200-day moving average – small wonder then that it looks like it’s done for now. 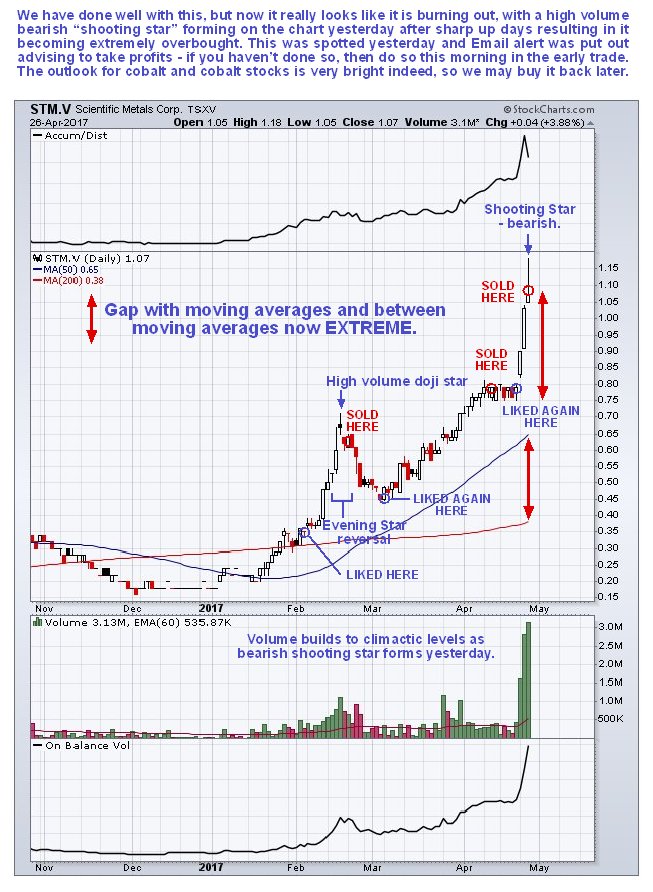 So – if you did not take profits yesterday before the close, it is probably best to do so in the early trade. The outlook for cobalt and cobalt stocks like this remains very bright indeed, so after a due reaction back from overbought, we may back this back again later. Scientific Metals website Scientific Metals Corp, STM.V, SCTFF on OTC, closed at C$1.07, $0.7956 on 26st April 17.
Posted at 9.30 am EDT on 27th April 17.