Review of our MASSIVELY PROFITABLE USO PUT TRADE, closed out this afternoon...

Review of our MASSIVELY PROFITABLE USO PUT TRADE, closed out this afternoon...
Friday, February 09, 2018
OIL PUT OPTIONS PLAY AS COTs & HEDGERS POSITIONS REACH STUNNING EXTREMES...
Sunday, January 21, 2018
Last Sunday in Oil Set to Tank we were looking for a steep drop in the oil price. It happened during the week, in part due to the stockmarket plunge but mostly due to a big rise in US production, which we were also expecting. In addition to going for a couple of Crude Oil leveraged inverse ETFs early on Monday, we also went for Puts in The United States Oil Fund. These Puts soared as oil broke down and dropped steeply from mid-week on, but today it became apparent by early afternoon that the risk of a reversal to the upside in the broad stockmarket was growing, as the S&P500 index had arrived at support in the vicinity of its rising 200-day moving average, and clearly, if it did so, it would probably have a positive effect on the oil price, especially as oil itself, and USO in particular, was arriving at the zone of strong support shown on our 4-month chart below. 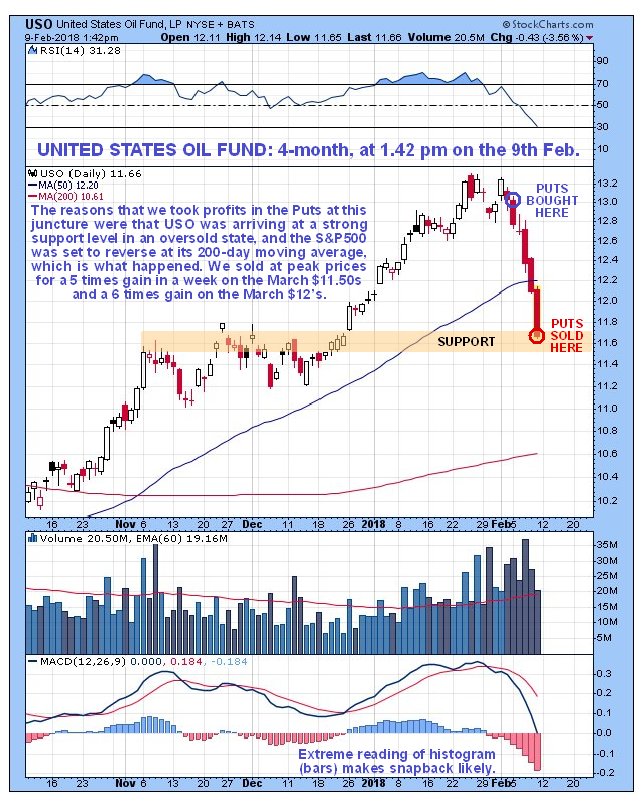 We therefore decided to take profits on half (or more) of our Puts at the point shown on the following 1-day chart for USO, with an Email alert being sent out at 1.39 pm EST. By the look of it, if you were fast, you may have sold them at close to top dollar… 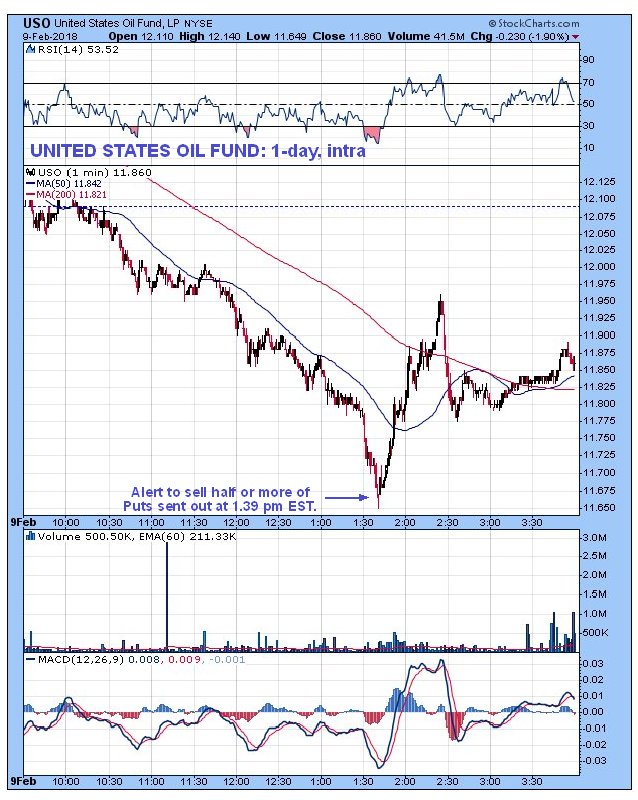 The following table shows where we bought the USO Puts. The prices are for the close of Friday the 2nd, but they are believed to have changed little at the point we bought them just after the open on Monday this week.

And the following chart shows where we sold them this afternoon…

Thereafter another Email was sent out at 3.27 pm saying to sell all Puts because by that time it was clear that a Reversal Day was completing in the broad stockmarket, with reversal candles in many stocks.

If you did this Put trade, and I know some of you did – WELL DONE! – I write about it, you did it. There is plenty else for us to examine this weekend, like the impressive reversal candle on big volume in GDX and the reversal hammer in the XOI oil stocks index. The latest COTs will also be most interesting, although, unfortunately, it is only up to date as of last Tuesday. Worth mentioning also is that action today in Mineworx Tech, that we looked at this morning, and Copper Mountain Mining, that we went for yesterday, was very positive. End of update.
Posted at 7.50 pm on 9th February 18.