GOLDEN RIDGE RESOURCES...
Sunday, July 05, 2020
GOLDEN RIDGE RESOURCES update...
Wednesday, September 05, 2018
GOLDEN RIDGE RESOURCES update...
Monday, April 09, 2018
One of the bright spots amongst our stocks has been Golden Ridge Resources, a Golden Triangle BC exploration stock that was expected to benefit from the usual seasonal rally in these speculative plays. The good news is that it has easily fulfilled our expectations, by more than tripling in price. While there is scope for further gains, the overbought condition and looming end of the drilling season, when interest wanes, means that there is a growing temptation for holders to take profits and knock the price back down. So with the favorable price on offer following the big up day several days back, which looks like an unconvincing break higher from a bull Flag, we might as well be near to the front of the line and take at least partial profits here - we are up over 3-fold on our initial purchase at C$0.13 in the Spring. So it is recommended to sell at least half of a holding and let the rest run, but sell the remainder no later than late early Oct, depending on what happens. The 3-month chart below shows the strong runup during the 1st half of August, but the unconvincing break higher from the bull Flag several days ago suggests that the advance could peter out and reverse. 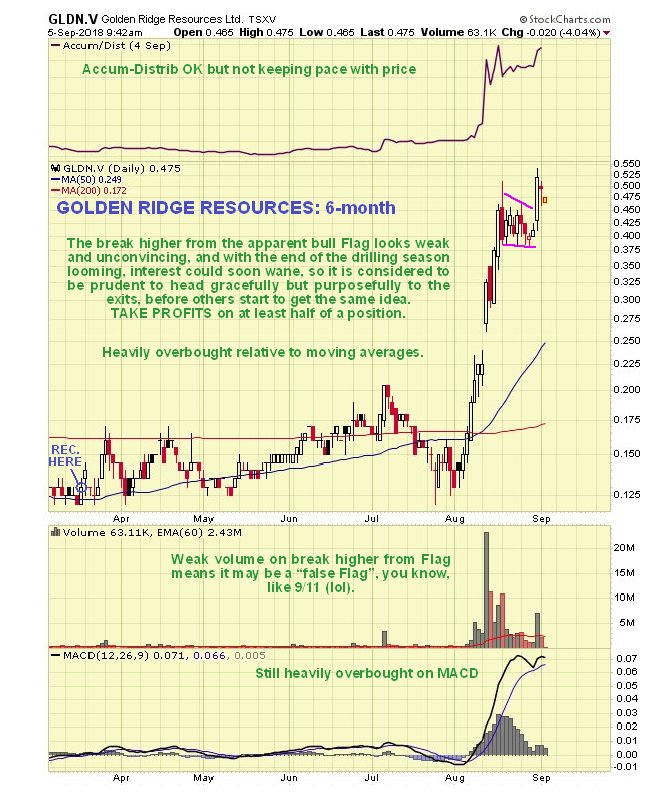 We took profits on at least half of a position in Aben Resources almost 2 weeks ago and that has since cracked, with a nasty drop over the past week. If still holding any of this, dump it on minor rallies.