HOW COMMODITIES WILL PERFORM IN THE IMPENDING MASSIVE CREDIT CRUNCH... 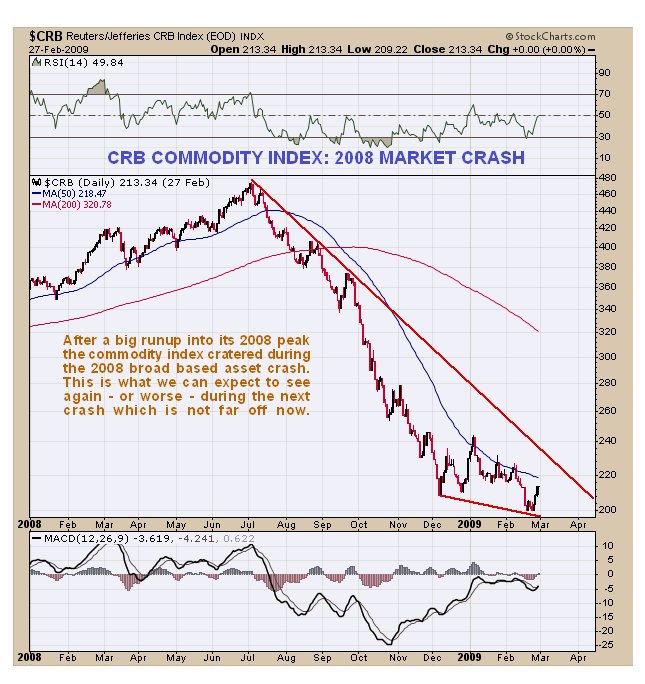 As for oil itself its decline during the 2008 crash was of a truly shocking magnitude, even with the benefit of 10 years’ hindsight – after all, oil is supposed to be the “lifeblood” of the modern world, is it not? 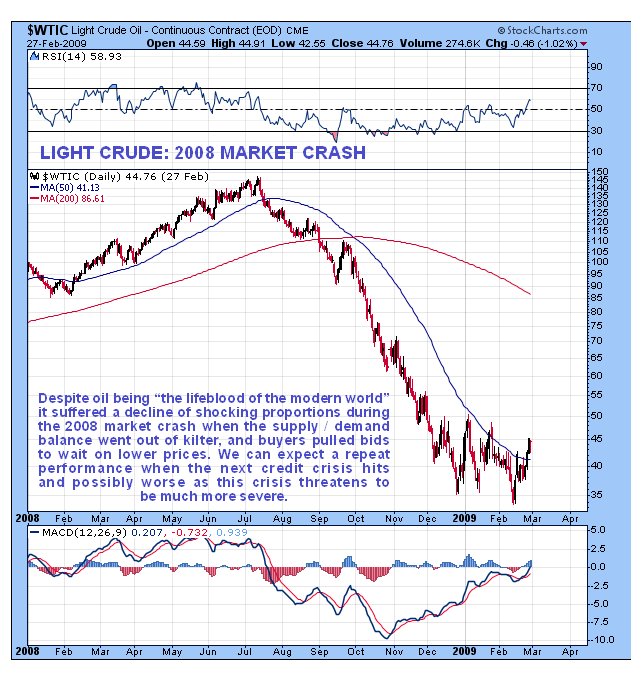 How does the drop in commodities back then relate to what has happened since and up to now? To see that we now look at a 14-year chart for the CRB index. After the 2008 – 2009 crash, the index recovered when the ship was stabilized after the crash by money pumping and bounced back, but then look what happened – in marked contrast to many other assets like Real Estate and stocks, commodities went into a severe bearmarket starting in 2011 and have never really recovered. Why is that? – the reason is that while successive QE programs created a lot of cash for the 1% to go on speculative binges, they did little for the real economy, which has largely languished, hence the flaccid demand for commodities. This is why real unemployment in the US, as distinct from false government data, is something near 20%. For the true data on things like this go to John Williams’ Shadowstats.com. It is widely thought that commodities hit a final low early in 2016 but on this chart the subsequent recovery looks weak and insipid compared to the plunge that preceded it. What it looks like in fact is a bearish Rising Wedge, and if this is what it is then a breakdown into another dramatic plunge lies ahead of us, which of course fits with our forecast for a severe credit crunch. 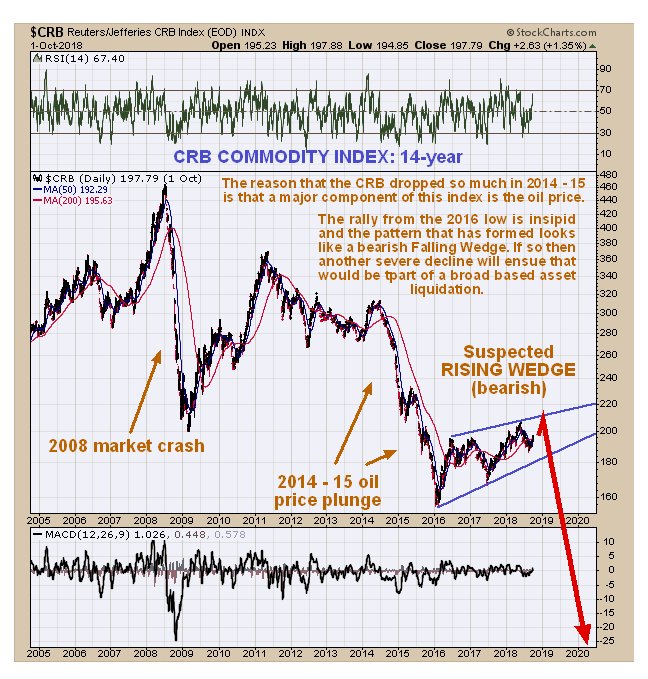 Thus, we should not be taken in by the CRB breaking out into a new intermediate uptrend yesterday, as shown on its 6-month chart, even if it equals or exceeds its highs of last May. 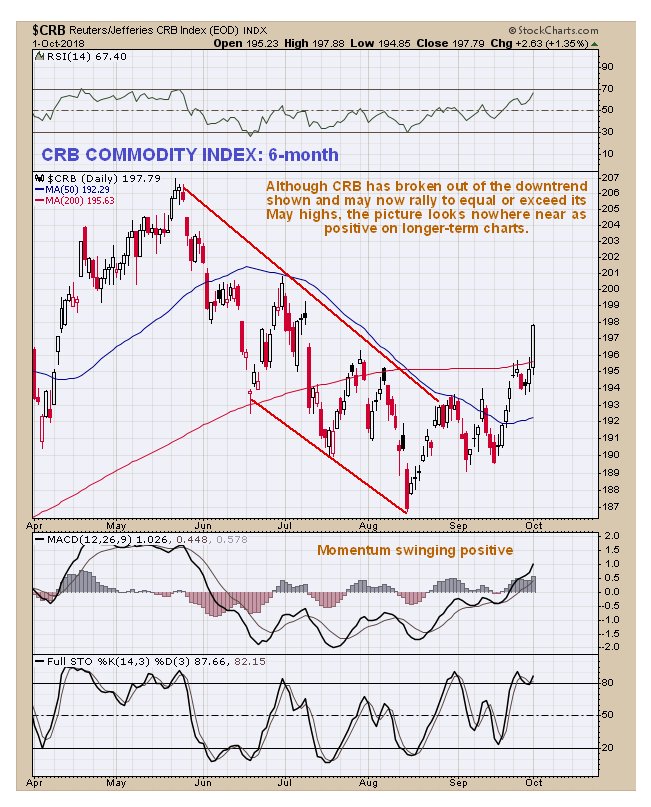 We have mentioned that oil is a big component of the CRB and if the CRB index looks as it does, then how does the oil chart look? It too should be marking out a potentially bearish pattern should it not? – it is. If we look at the latest 10-year chart for light crude we see that it is approaching the apex of a bearish Rising Wedge that is rapidly closing up and is also in a zone of strong resistance. Together these factors suggest that it will break down from the Wedge before much longer and plunge, which again accords with our forecast for a severe credit crunch, and since this credit crunch looks set to be far worse than the one in 2008, we could easily see oil drop below its early 2016 lows in the $20’s, barring a major military conflict in the Mid-East of course. 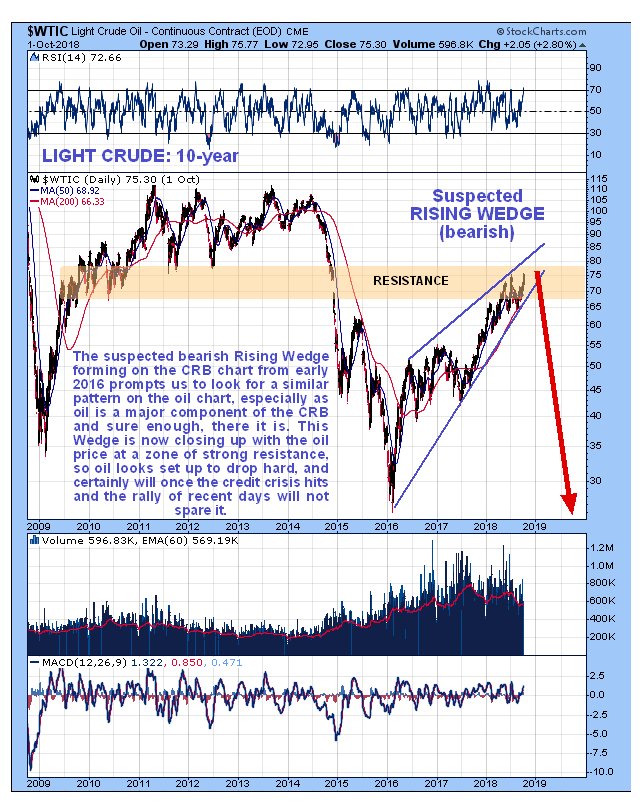 The challenge for us is to make our forecasts for individual stocks, and for the Precious Metals sector, consistent with what is set out here. For example, we know that COTs and Hedgers’ positions for silver are already very bullish by normal standards, but that won’t stop it dropping further during a broad based asset liquidation. Similarly, individual stocks in other sectors recommended on the site on their own individual merits could make sizeable gains ahead of the market crash, but once it hits could get caught up in the maelstrom – it’s all a question of timing. Finally, whilst we can’t be sure exactly when the stockmarket will turn tail and head south, we know that a savage bearmarket is drawing closer and we end with a look at a couple of many charts / indicators showing the market’s condition is extreme… First the number of indicators showing extreme pessimism and the number showing extreme optimism, is very skewed, showing that excessive optimism abounds… 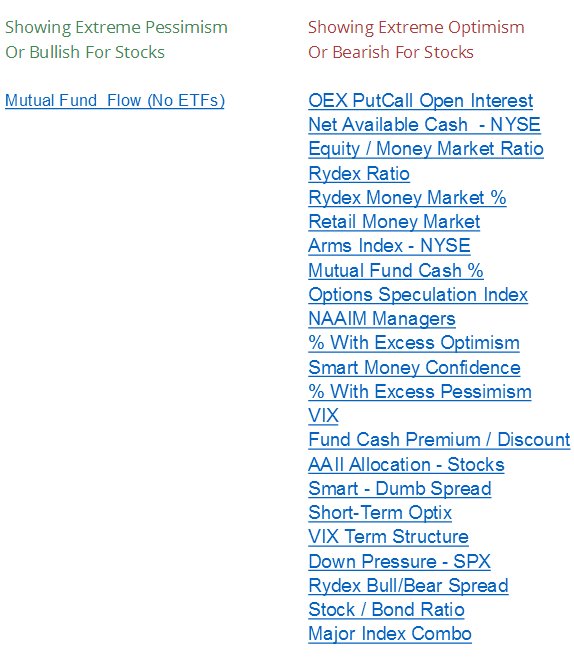 Chart courtesy of sentimentrader.com
Next the ratio of Call buying to Call selling is at an extreme not seen since the year 2000…

Click on chart to popup a larger, clearer version. Chart courtesy of sentimentrader.com
In addition there has been a big cluster of Hindenburg indicators in recent weeks.
End of update.
Posted at 2.15 pm EDT on 2nd October 18.