Apple Puts update AHEAD OF RESULTS...

REVIEW OF OUR SUCCESSFUL APPLE PUTS TRADE...
Sunday, September 06, 2020
IS THE APPLE MELTUP ABOUT DONE?? - options strategies...
Wednesday, September 02, 2020
APPLE INC. - when it comes to the CRUNCH...
Monday, April 01, 2019
At this point it looks like we chose the wrong FAANG to short with Apple, and should have gone for something else instead like Amazon, as Amazon has plunged along with the broad market, while Apple has stubbornly refused to drop although it has been repeatedly digging into support in recent days. We went for Apple Nov 210’s at $3.25 ask on the 20th and currently they stand at $7.10 bid, so we have almost doubled our money, which is peanuts (so far) in this game. So why has Apple refused to breach support and drop? The reason that it has refused to drop much is that investors are hanging on to hear its results statement on 1st November. So it looks like we are going to see a classic “sell on the news” event after 1st November, because if the results are disappointing, or only meet expectations, and even if they modestly exceed them, a lot of investors who have been hanging on are likely to take profits, and remember, if that turns out to be the case, then Apple has a lot of mean correcting to do to match the drop in the other FAANGS over the past couple of weeks. So we are going to watch this situation closely with the aim of doing more Puts depending on how the stock looks late tomorrow. The theory is simple – even if there is thought to be only a 50:50 chance of it dropping hard after results on Thursday (and it is probably more like 70:30), the Puts will make massive gains fast if it does drop, so just on a statistical basis, this trade is an attractive play. 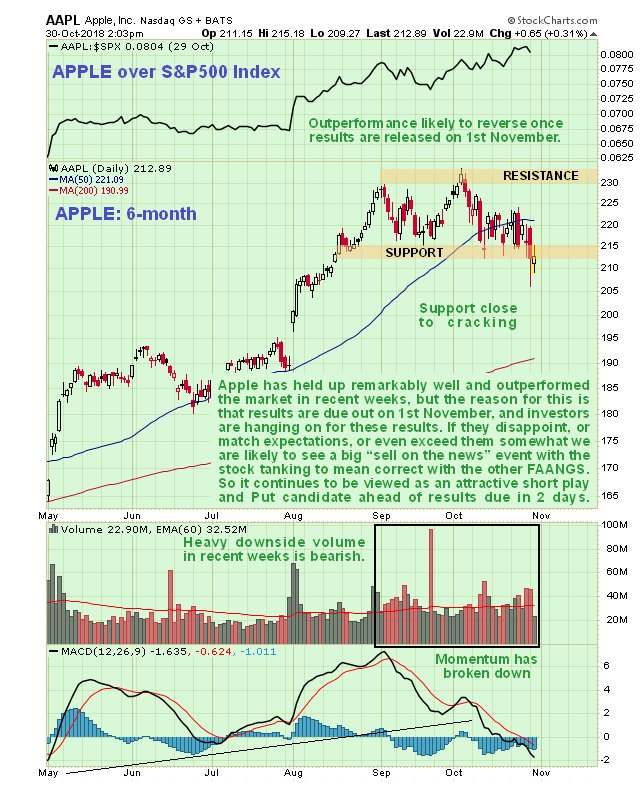 Note that the writer has experience of such plays, having bought a tranche of Puts in a company called Trafalgar House in London a day before results were released. When they were, they were declared to be “satisfactory” and the stock didn’t move much at first, but then it tipped into an accelerating decline that resulted in the Puts rising from 1 to 12 for a 12-fold gain in a week, at which point they were sold – but too early because a month later they stood at 40! Attractive or not, you are reminded that an options trade of the kind described here is only suitable for investors and traders who have sufficient experience in this area, and are prepared to take full responsibility for their actions. The plan is to review appropriate Put option series in the afternoon tomorrow. Apple Inc website Apple Inc, AAPL on NASDAQ GS, trading at $212.83 at 3.57 pm EDT on 30th October 18. End of update. Posted at 2.57 pm EDT on 30th October 18.