IRVING RESOURCES update...
Friday, November 30, 2018
IRVING RESOURCES...
Friday, November 23, 2018
The fundamentals for Irving Resources are excellent. As Bob Moriarty of 321gold.com has just said in an interview with “Goldfinger” who is not the Goldfinger in the James Bond film of the same name… “There are dozens of stocks that I like right now but the one stock I really like right now is Irving Resources (CSE:IRV, OTC: IRVRF). Goldfinger: That’s a gold explorer in Japan. It’s interesting that you mention Irving because the Hishikari Mine in Japan is one of the most profitable gold mines in history and Westhaven Ventures’ (TSX-V:WHN, OTC:WTHVF) recent discovery at Shovelnose has been compared to Hishikari by some people including John Kaiser. Both Hishikari and Shovelnose are epithermal gold systems found along the Ring of Fire and Westhaven can only hope that the two will continue to be spoken about in the same sentence. Tell us about Irving and what they are exploring in Japan. Bob Moriarty: Go take a look at Irving’s NR from October 19th, they released 13 surface samples from their Omu gold-silver project in Hokkaido, Japan and the average grade of the samples was an average of 51 g/t gold. Now you just mentioned Westhaven, that is a tremendous home run and that was something I wrote about in May at C$.19 and you wrote about in April at C$.14. Where is Westhaven now? There are juniors out there right now that are $.02 that will go to $2 and I think Irving was C$1.13 yesterday with about a C$40 million market cap and Irving has the richest ore i’ve ever seen in any mine in my life and they are going to start drilling shortly. This could be a $25 stock if they hit with their first drill program. Goldfinger: How many holes is Irving about to drill? Bob Moriarty: They don’t have a set number of holes outlined but they’ve got a 20km long structure with some really juicy drill targets. A drunk monkey could spot drill holes for them, there are that many targets and they are really juicy.”
Fair enough, so how do the charts look? – just great, as it happens. Looking at the 3-year chart for Irving traded on the US OTC market, where volumes are good, we see that it is in an established steady uptrend that looks set to at least continue and very possibly to accelerate. Furthermore, having reacted back, it is now near to the lower boundary of this uptrend channel and so we are clearly at good point to buy it, since it looks set to start higher again soon and head towards the upper boundary of the channel. The Accumulation line is strong relative to the price and the MACD indicator shows that it has plenty of upside potential. The scope for further short-term losses caused by year-end tax selling looks limited, and it is more likely that it will turn now or soon due to other more important considerations. 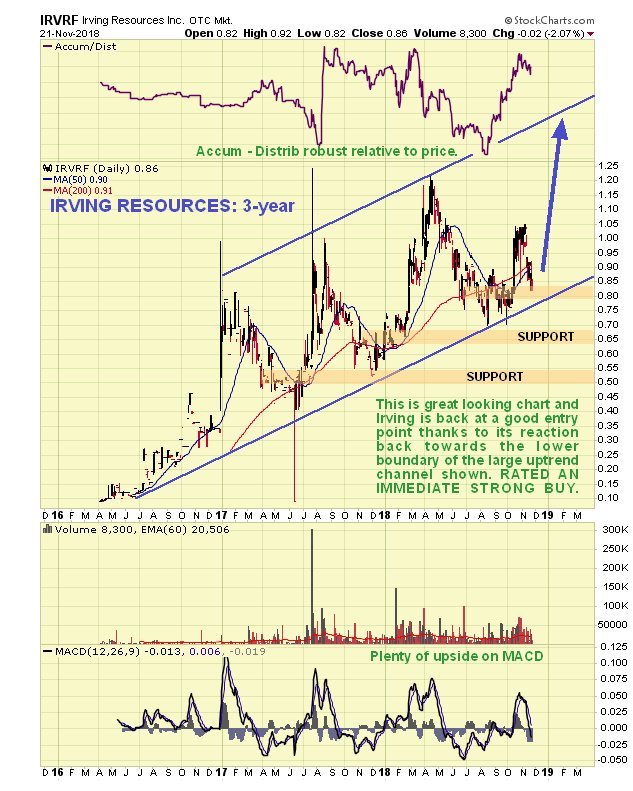 On the year-to-date chart we can see the reaction back across the channel shown on the 3-year chart in more detail, which brought the stock back to a much better price. After reacting back from its April peak, an intermediate base pattern formed from the late June low onwards, which it broke out of in October and it has since reacted back to test support within the base pattern, and with moving averages now in bullish alignment it looks well placed to turn higher soon, or immediately. This looks like a favorable entry point here. 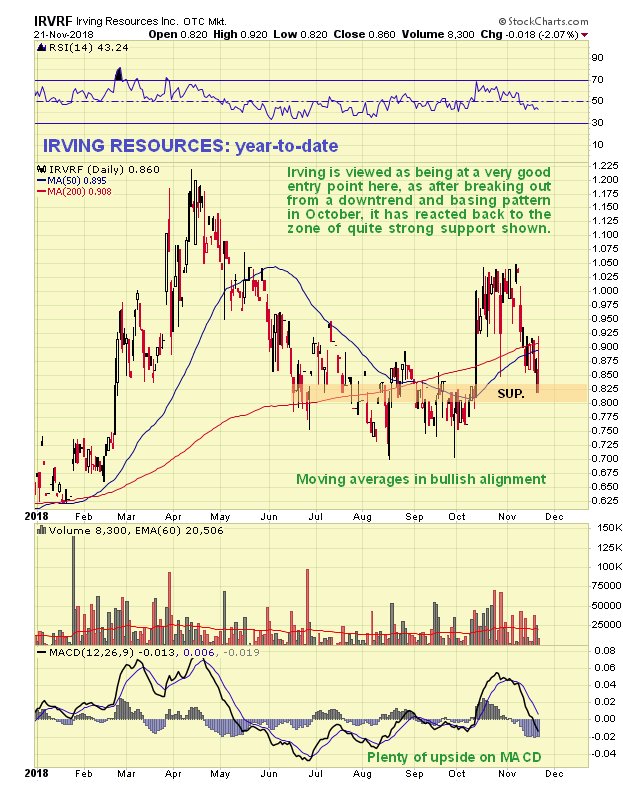 Before closing it is worth reminding ourselves that the case for a major sector bullmarket is getting stronger and stronger, and an easy way to do this is to take another look at the gold / silver ratio chart, which is at its most bullish for 20-years… 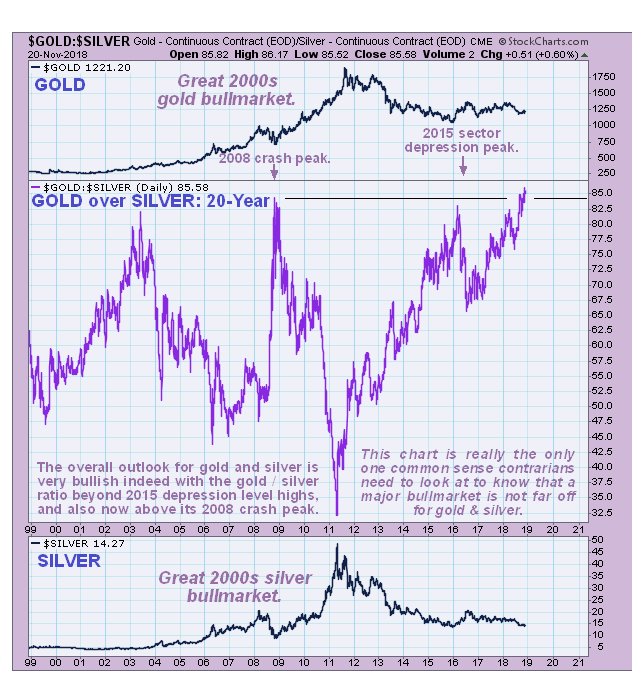 So with Irving about to start drilling on a property which Bob Moriarty describes as containing the richest ore he has ever seen in any mine in his life, the outlook for Irving stock could scarcely be better, and the company looks set to be Big in Japan. On the 20th the company announced a non-brokered private placement of close to 1.9 million shares at C$1.10 per share, which will bring the number of shares in issue up close to a still modest 34 million, so that’s out of the way. Irving Resources website Irving Resources Inc., IRVRF on OTC, IRV.CSX, closed at $0.86, C$1.20 on 21st (US) and 22nd (Canada) November 18.
Posted at 7.00 am EST on 23rd November 18.