FED CRUMPLES - and SEALS THE DOLLAR'S FATE...
Friday, February 01, 2019
The Fed didn’t just fold on Wednesday, it crumpled, capitulated. A long time ago we had figured out that when push came to shove, this is what it would do. However, we thought that it would take a market crash to force it to change course, in order that it could use that as solid justification for a U-turn, instead of which it only took a crashlet, or the start of a crash. The Fed’s “Prime Directive” is to serve the interests of their Masters, the fabled 1% who control society, and they have done an admirable job of it over the past 10 years since the market crash, with their QE and ZIRP policies, which have funneled the wealth of the lower and middle classes up to the top of the pyramid, to the 1%, whose wealth has increased enormously as a result, while the common man has gotten poorer. This is a system that works so well for the 1% that they naturally want to keep it going as long as they possibly can – so they don’t want the markets to crash and the masses to come after them with pitchforks, as is starting to happen in France, where they made the mistake of turning the screw too far, and so, in deference to their Masters, the Fed is doing an about face as it prepares to drop rates again and revert to QE. The Fed has struggled to create wiggle room for itself over the past year or two by steadily raising rates and starting to reduce its balance sheet, so that it will have some ammo ready to confront the next crisis, which ironically these actions are helping to bring on, but they have only made limited progress towards these objectives and are already having to reverse course to head off a market crash. But the problem is, as we had already worked out a long time ago, the Fed cannot “have its cake and eat it too”. The dollar trended higher from last April because of the trend of rising interest rates, but with that ending it will have an important prop kicked out from under it, at a time when it is under increasing threat from the move to de-dollarize by major powers that have had enough of US hegemony and from an accumulation of debt throughout the system that has ballooned to catastrophic levels. So the Fed can’t have it both ways – it either accepts the cyclical necessity of a market crash and the resulting economic depression and purging of debt from the system, or it tries to delay this reset as long as possible by lowering rates again and engaging in another orgy of money printing, which this time will have to be on a scale that eclipses all previous efforts, that will crash the dollar. We know that they will take this latter course, and made it plain last Wednesday that they intend to, because this is that route that keeps the status quo going for a long as possible to the benefit of the 1%, even if it ends in hyperinflation and ruin. The big relief rally in the stockmarket since 26th December is essentially a party to celebrate this U-turn by the Fed, and it is widely assumed that we will see a return to “business as usual” with “risk on” and various asset bubbles being pumped up again. However, the markets are overlooking the “elephant in the room” which is the effect of this U-turn on the dollar and the Treasury market. The dollar will tank, and this is going to make foreign investors, who until now have been an important force propping up US markets, think twice about investing in the US, especially as it will come on top of misgivings generated by the fiasco of the Trump Presidency (partly caused by others trying to undermine him, not least the mainstream media who serve Deep State interests) and the Trade War etc, so an accelerating downtrend in the dollar can be expected to trigger a reversal of capital flows into the US that will pull the plug on both US stockmarkets and the Treasury market. Since we are not some Oxford or Cambridge debating society, the foregoing arguments bring us to the point of this article, which is eminently practicable, and that is that the Fed’s caving in seals the dollar’s fate which is to drop, and drop hard. This is why gold and silver are firming up, and why oil is on the point of breaking out upside from a Head-and-Shoulders bottom. So without further ado, let’s look at a chart for the dollar index. On the 5-year chart for the dollar index we can see that after its advance from early 2018 promoted by the Fed raising rates, it has been scuppered by the Fed’s latest declared stance and is on the point of rolling over and dropping hard, as shown… 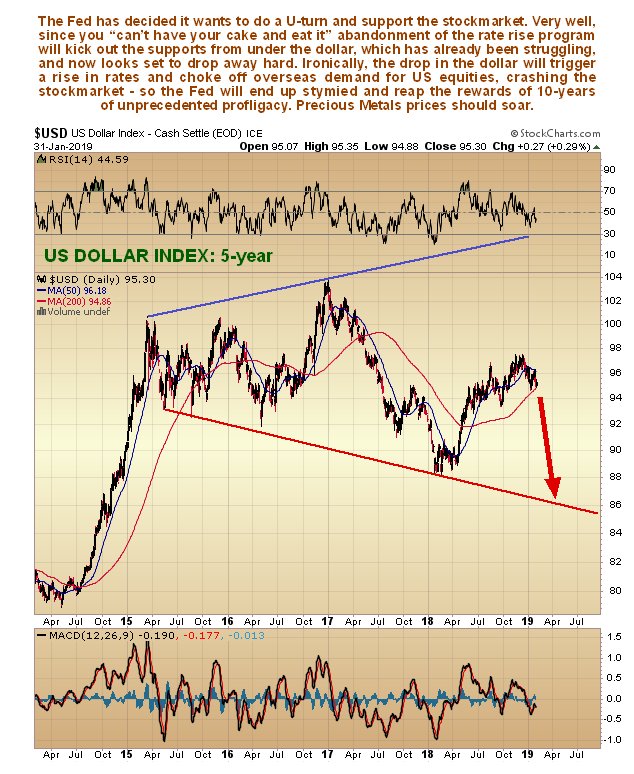 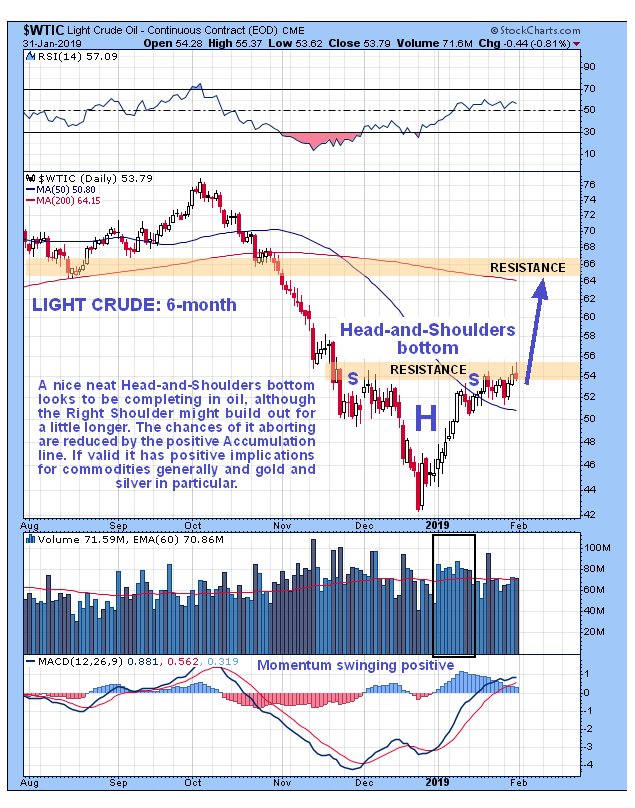 A breakdown and serious drop by the dollar is expected to trigger a breakout and steep advance in the Precious Metals and we can see on its 10-year chart that gold is almost in position to break out above the key $1400 resistance level, which will mark the start of a major bullmarket that could eclipse all prior bullmarkets… 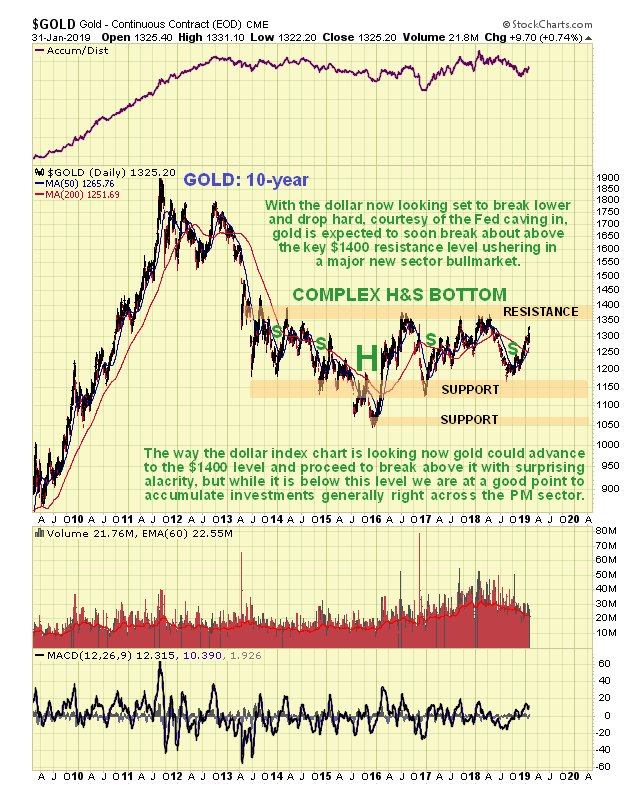 A serious drop in the dollar will coincide with the market, not the Fed, driving rates higher – the Fed will be an impotent spectator. The drop in the dollar coupled with rising rates will rip the rug from under the stockmarket, whose bearmarket rally of recent weeks has been caused by a foolish belief that the Fed caving in under pressure will lead to a return to “the good old days” and heavy short covering….

Conclusion: we stay long our broad market inverse ETFs and deploy as much capital as we can into the Precious Metals sector which looks like it is building up to a powerful advance, and an important point to note here is that once gold breaks above key resistance in the $1400 area it probably won’t look back, and the sector will spike higher, affording little opportunity to buy on pullbacks as there may not be any. End of update.
Posted at 9.20 am EST on 1st February 2019.