WILL SILVER GET SMASHED DOWN EVEN LOWER BY THE MARKET CRASH? - we review the latest charts and COTs...

WILL SILVER GET SMASHED DOWN EVEN LOWER BY THE MARKET CRASH? - we review the latest charts and COTs...
Thursday, May 30, 2019
The purpose of this update on silver is to attempt resolve a number of glaring contradictions amongst its technical indicators to arrive at the most probable scenario for it in coming weeks. A number of subscribers have pointed out that silver’s latest COT looks increasingly bullish, with the habitually wrong Large Specs giving up on it completely and starting to go short, and the Commercials scaling back their earlier large short positions. This is true – the latest COT does look increasingly bullish as we can see below. In addition they also pointed out that silver is approaching a zone of quite strong support approaching its late 2015 lows, obviously a good point for it to bottom. But will these important factors stop it dropping further and perhaps breaking to new lows? Probably not, for overriding reasons that we will now consider. 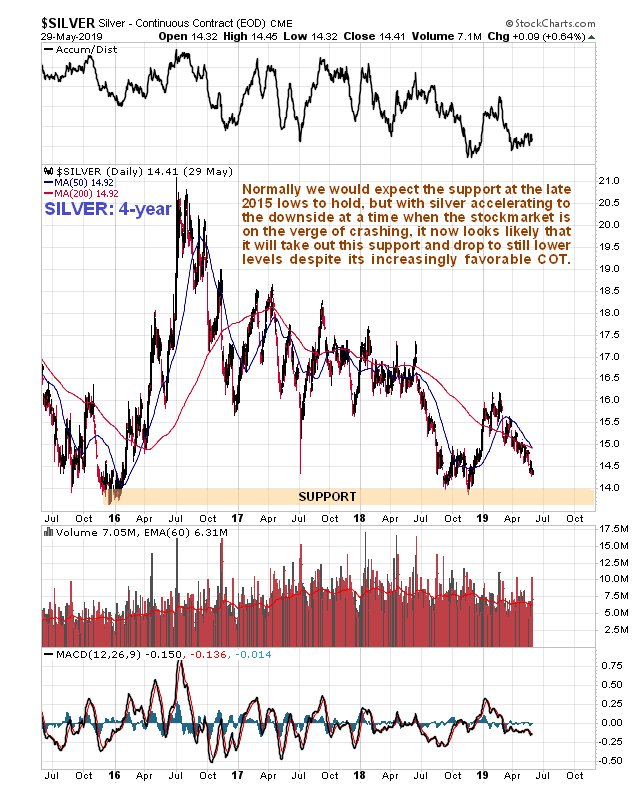 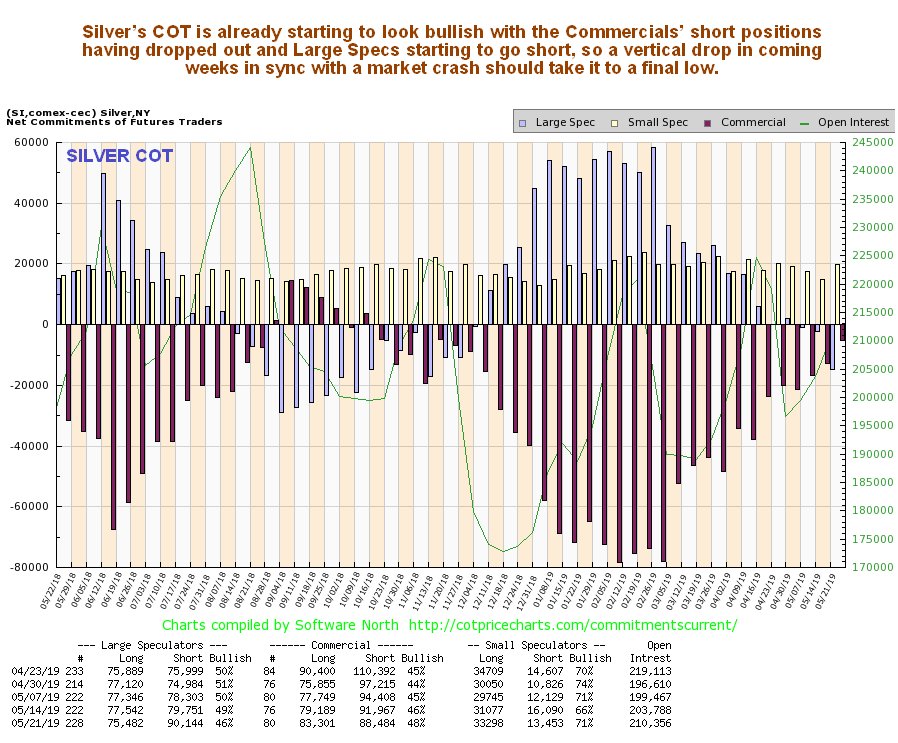 To start with, in marked contrast to silver’s COT, gold’s last COT chart does not look bullish at all – it shows that there is a lot of room for gold to fall further – and if it does it will almost certainly take silver along with it for the ride… 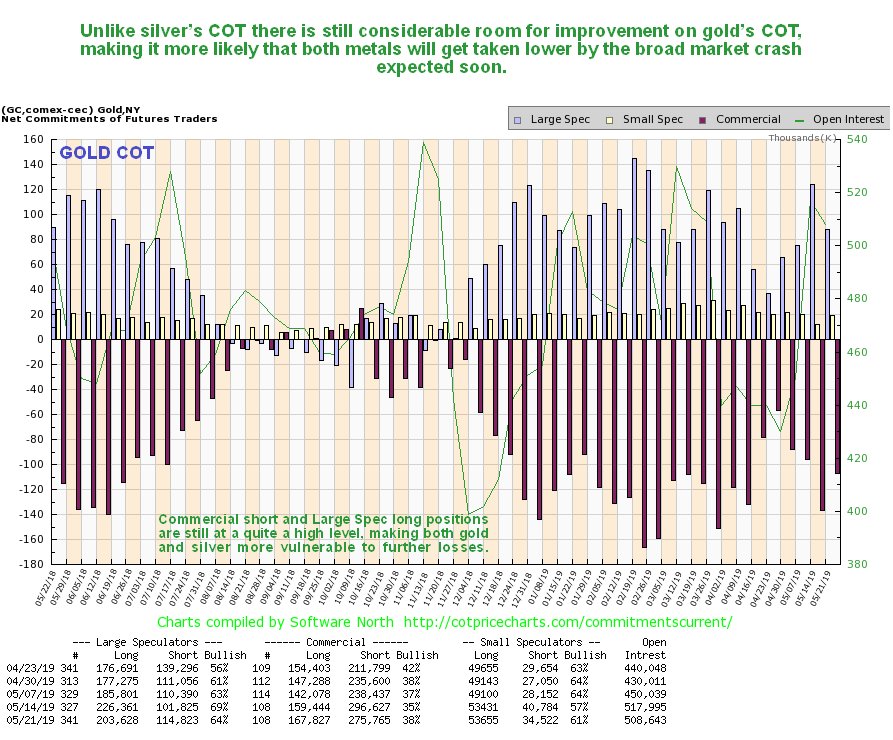 Click on COT charts to pop up larger, clearer versions.
A big reason that silver could continue to drop is that the stockmarket is now in position to crash, which is likely to be accompanied by temporary dollar strength, that would likely cause the PM sector to plunge along with everything else, as in 2008 – and we can see on silver’s 6-month chart that it is starting to accelerate away to the downside from what we had earlier taken to be a bullish Falling Wedge. 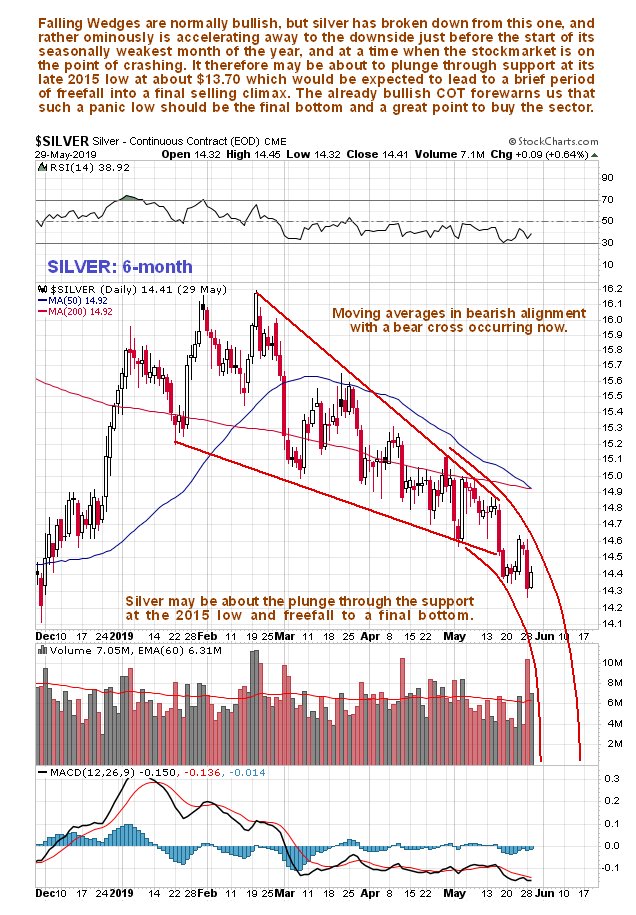 Another circumstantial reason is that the latest chart for GDX looks increasingly ominous, with it looking like a bear Flag is completing. If it is, then another plunge in PM stocks is in the offing. 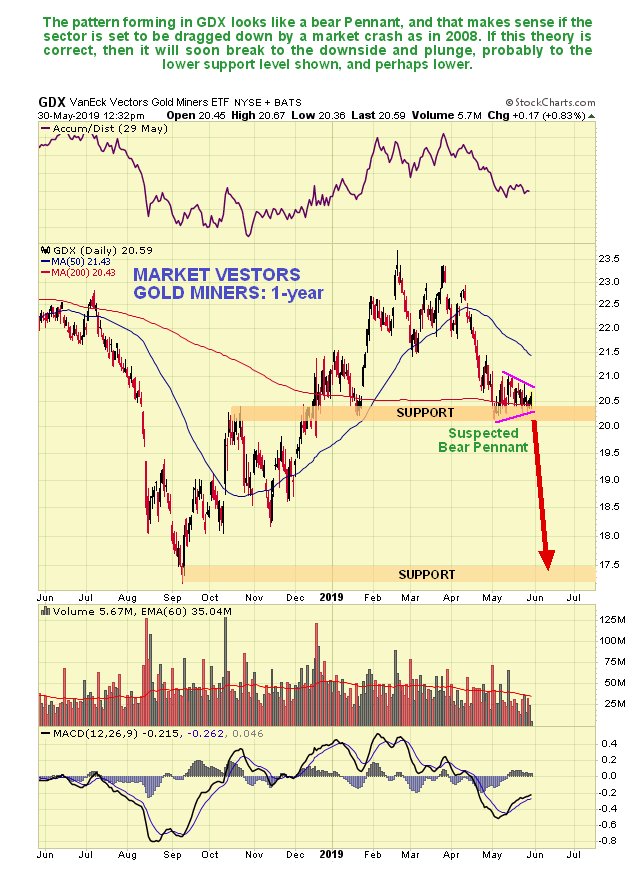 Finally, June is seasonally the worst month for silver by far as our seasonal chart for silver shown below makes abundantly plain. 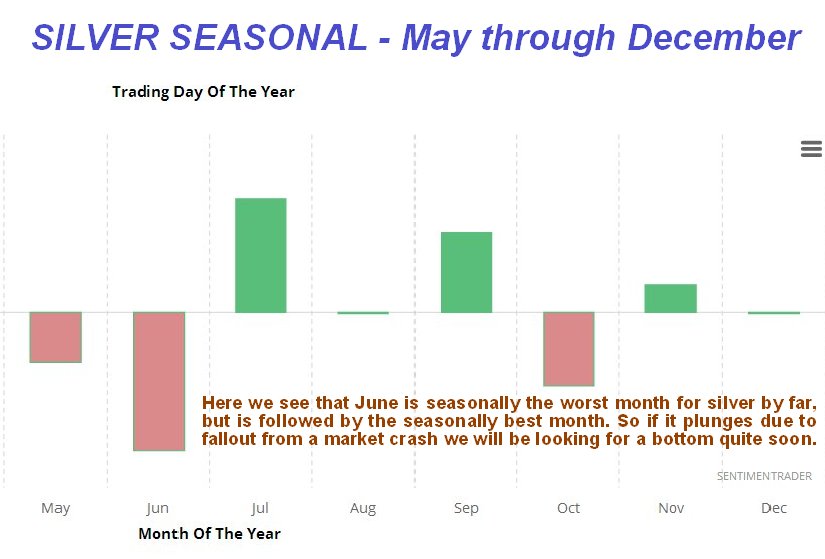 Weighing all this up, it looks like silver is going to get dragged down further as the stockmarket plunges, taking the PM sector with it, but with its COTs already looking bullish, it will wind up like a beach ball pushed under water, so that the moment the stockmarket crash phase is over, it should come roaring back up again. If we can anticipate this bottom there will be some spectacular bargains available at such a bottom. A stock that we are going to keep a close eye on in coming weeks is Coeur Mines, which has suffered a lot in recent weeks and is already getting very cheap, and this is not because of problems particular to the company, because the same thing has happened to Hecla Mining. You will readily understand why when you see on its 4-year chart that when it recovered from its early 2016 lows, it rose 8-fold in the space of about 6 months. 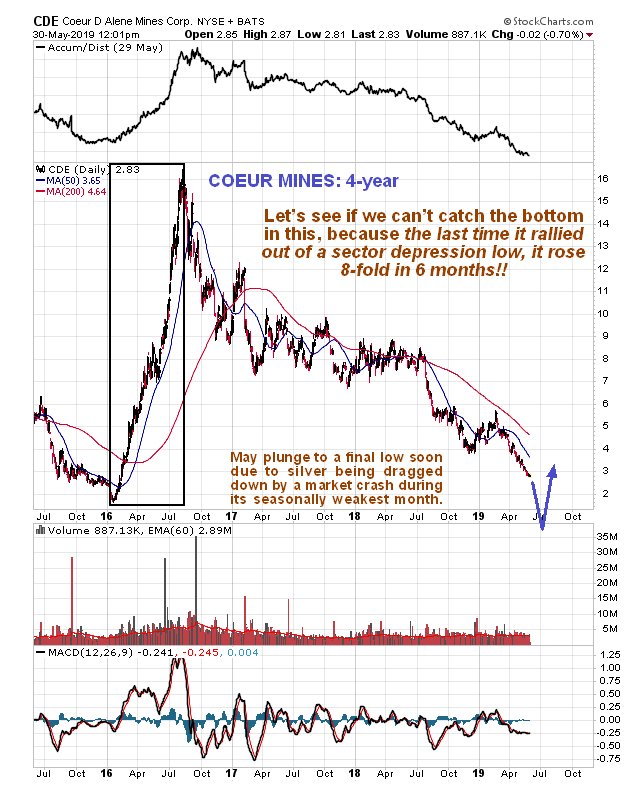