DOLLAR BREAKING DOWN SIGNALS START OF GOLD BREAKOUT DRIVE ABOVE $1400...

DOLLAR BREAKING DOWN SIGNALS START OF GOLD BREAKOUT DRIVE ABOVE $1400...
Tuesday, June 04, 2019
The Precious Metals sector has broken strongly higher in recent days, with silver breaking out of its downtrend just yesterday, when the fundamental reason for this move emerged – the Fed has let it be known, via the St Louis Fed governor, that they are going to drop rates soon. This is clearly a panic move triggered by the stockmarket breaking down below key support – the intention is to head off a stockmarket crash, but it looks unlikely to succeed because they have much less room to drop rates than they had back in 2008, however, what they are likely to succeed in doing is breaking the dollar down into a severe bearmarket, and a storm is already bearing down on the dollar due to the accelerating global trend to dedollarize which has been given added urgency by the US administration’s overt bullying of enemies and allies alike by means of sanctions, tariffs and in some cases the threat of military action. This is why gold has been rallying, and this time it does not look like it will be a false dawn – instead it appears to be the start of a major breakout drive that will see gold launch out of its gigantic 7-year long base pattern by breaking out above key resistance at the $1400 level, a development that we have been anticipating all this year. We’ll start by looking at the latest action in the dollar index. On its 6-month chart we can see that it has started to drop away hard after making new highs as recently as a week to 10 days ago. This sharp drop looks like it may be the start of something more serious, and we know why having looked at its 2-year chart some days back. 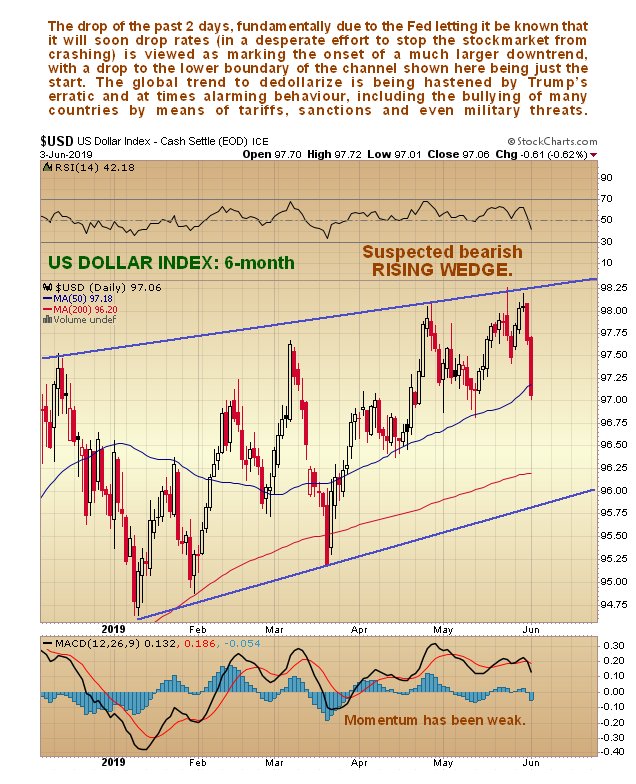 It’s worth also looking at the 6-month chart for dollar proxy UUP, the reason being that this shows trading volume. This chart reveals very heavy volume on this drop, which is a further indication that we are probably witnessing a major reversal in the dollar here, after more than a year of wafting higher despite huge careening deficits, due to the interest rate differential, which now looks set to vanish or at least diminish. 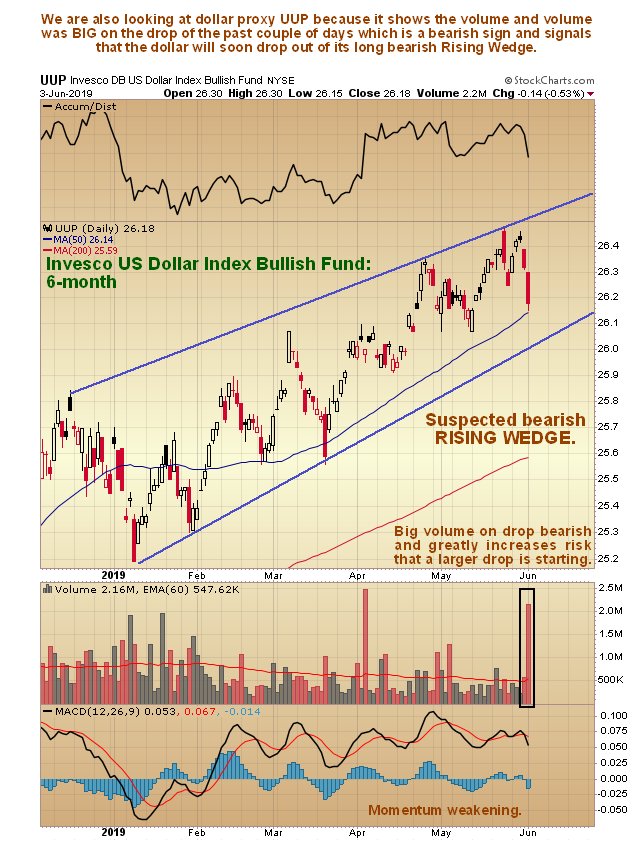 Now we turn to gold where we see that Smart Money - probably insiders - were aware of this rate development before it became public knowledge, which is why gold has spiked higher in recent days as we can see on its latest 6-month chart below, breaking out of its bullish Falling Wedge pattern on good volume, with additional positive factors worth noting on this chart being the strong Accumulation line and the way moving averages have swung into powerfully bullish alignment. Have we missed it? – well, the past couple of days maybe, but the crucial point to note here is that is that in the larger scheme of things this is the start of something much, much bigger, so anyone getting in here is getting in very near to the start of it. This will quickly become clear as we review the latest 10-year chart for gold. 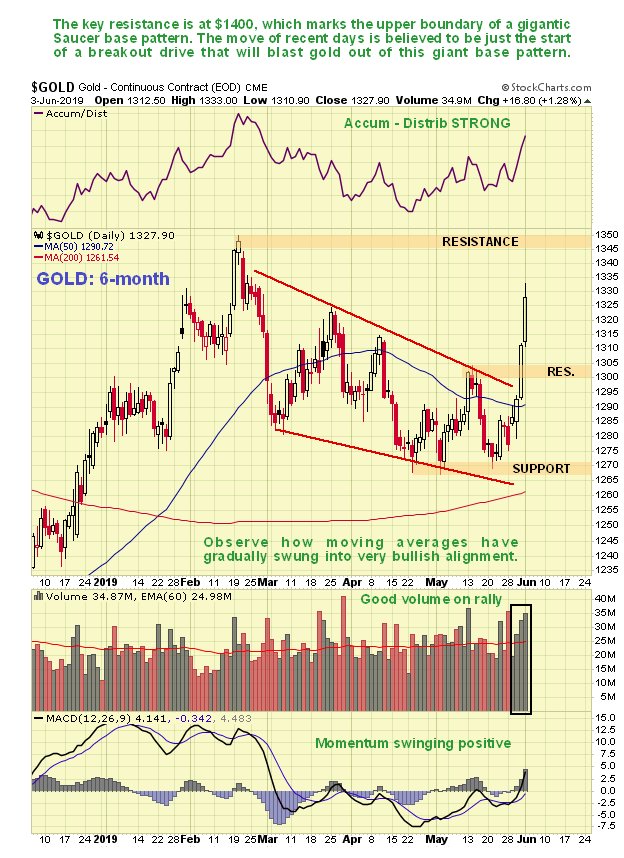 On gold’s 10-year chart we see that it has been readying to break out upside from its gigantic 6-year long Saucer base pattern all year. The strong resistance towards the upper boundary of this pattern is all too obvious and most investors and traders are aware of it. What this means is that once it does succeed in breaking out above it, a lot of investors and speculators are going to pile in and drive a huge rally, at which point the PM sector will soar – remember that most surviving mining companies have pared costs to the bone during the long lean years, so any improvement in the gold (or silver) price will go straight through to their bottom lines. With the Fed set to cut rates in a desperate attempt to shore up crumbling stockmarkets, the dollar could well tank, which means that gold and the PM sector generally – already set up to break out as we can see here – will take off like a rocket. 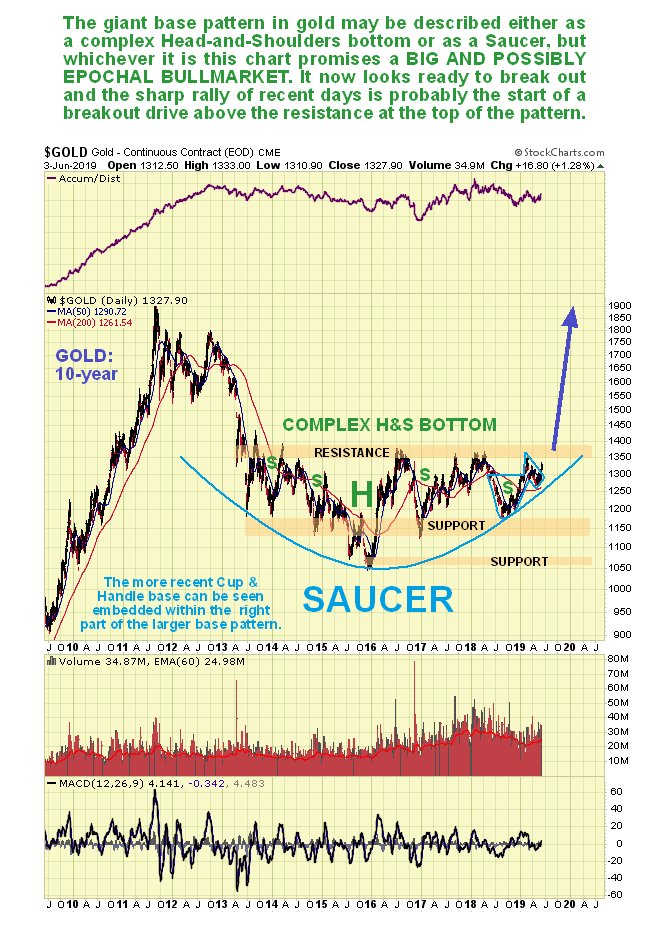 What all this means is that silver and silver investments are probably one of the best investments on Earth right now. Silver investments have been ground into the dust in the recent past, and while gold has broken out and streaked higher over the past several days, silver only broke out of its downtrend just yesterday as we can see on its 6-month chart below, which means that yesterday has the distinction of being the very first day of a blistering massive silver bullmarket. Like to get in near to the start? – well, now’s your chance. 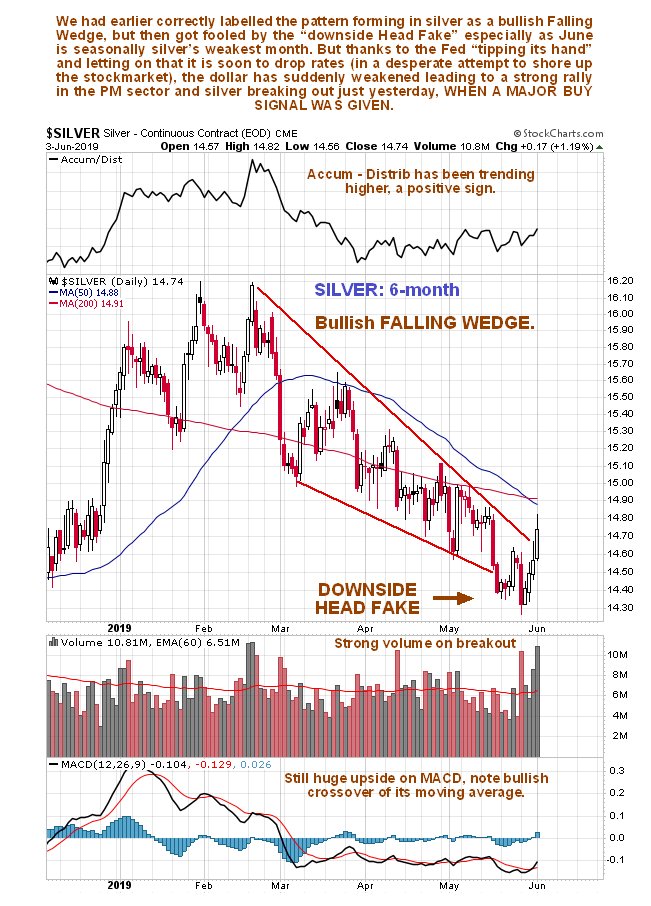 Want some confirmation that silver really is starting a major uptrend? – take a look at this – the chart for hyper-sensitive and manic – depressive Coeur Mines shows that it rose a useful 5.6% yesterday, but much more impressive and important was the huge volume on this move at 17.5 million. This was Smart Money falling over themselves to establish positions. The stock hasn’t even broken out the downtrend shown yet, but this is a strong sign that it’s about to and when it does a powerful uptrend is to be expected. To give you an idea just how powerful consider this – during the first half of 2016 Coeur rose 8-fold in 6 months on the back of a strong sector recovery move, but this was just a move off the bottom, the move that is starting now will involve gold and silver breaking clear out of their massive 6-year long base patterns into exceptionally powerful bullmarkets fuelled by systemic collapse and a trend towards hyperinflation as governments deal with liquidity problems the only way they know how, by printing money to throw at them to buy a little more time. 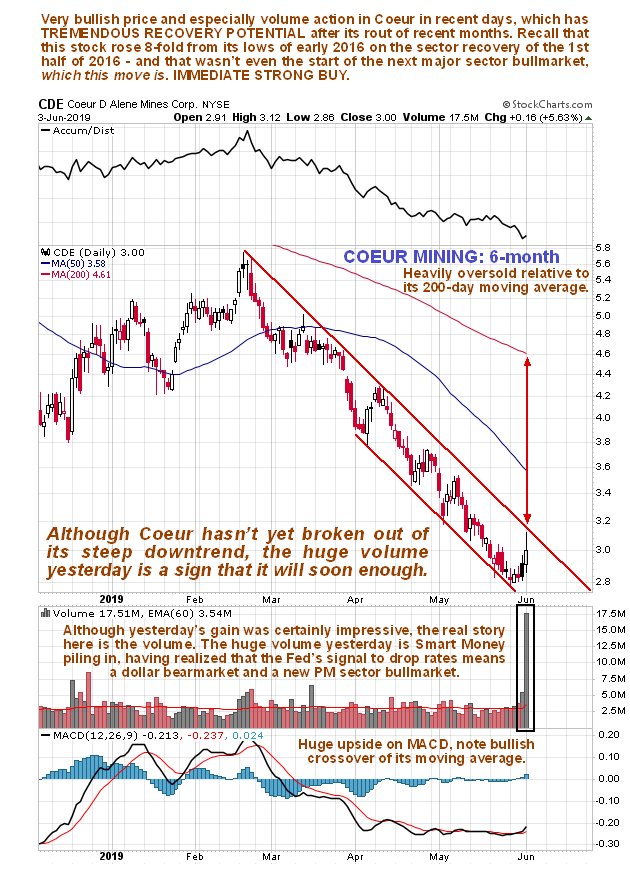 So the period ahead of us is likely to be the most exciting time in history to be a Precious Metals sector investor and it therefore won’t surprise you to learn that we will have a marked tendency to focus strongly on this sector going forward. End of update.
Posted at 6.25 am EDT on 4th June 19.