GOLD’S EPOCHAL BREAKOUT WILL NOT BE NEGATED BY A CORRECTION...

Gold Market Update - POST BREAKOUT REACTION PROVIDES ANOTHER BUYING OPPORTUNITY...
Monday, November 21, 2022
GOLD AT CRITICAL JUNCTURE - interim update...
Sunday, April 04, 2021
GOLD LOOKS GREAT HERE...
Sunday, December 06, 2020
It has been a truly glorious month for gold, and the purpose of this update is to point out firstly that the gold breakout of the past week was genuine and secondly that any short term reaction back as far as $1380 or even $1370 will not negate the breakout – instead it should be seized upon as an opportunity to build positions across the sector, especially in trampled down undervalued silver stocks – silver broke higher last week on its strongest upside volume since its frothy top in 2011 and on its 2nd highest upside volume ever.

On the 6-month gold chart we can see the impressive breakout runup of recent days that has taken gold to a Flag target that it has reached in an extremely overbought state, which means it is entitled to take a rest here and that is what it is doing. Two other factors calling for immediate consolidation/reaction are the appearance of a short-term bearish shooting star candlestick on the chart yesterday, and the fact that it has run way ahead of its moving averages, which are now in strongly bullish alignment. We should not be surprised therefore to see it react back near-term, to perhaps $1380 or even $1370, which will have folks doubting that the gold breakout is genuine, but it is genuine, as made clear by the strong volume on the breakout, so we will use any such reaction as a buying opportunity. 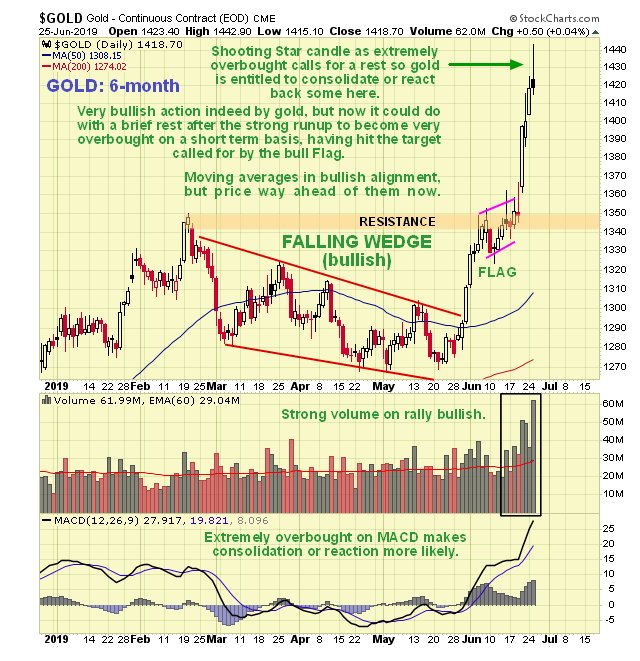 The 3-year chart gives us useful perspective on the breakout, enabling us to see that it occurred from a fine Cup-and-Handle base that we had delineated quite a while back. This chart also makes clear how steep the recent rise has been and shows that it has become extremely overbought on its MACD, which means that it could do with a rest now. However, that said, THIS IS A MAJOR AND PROBABLY EPOCHAL BREAKOUT THAT IS OCCURRING HERE, SO GOLD IS PERFECTLY ENTITLED TO ACCELERATE AWAY TO THE UPSIDE, and is thus not expected to tarry for long. So any near-term weakness may be bought aggressively. 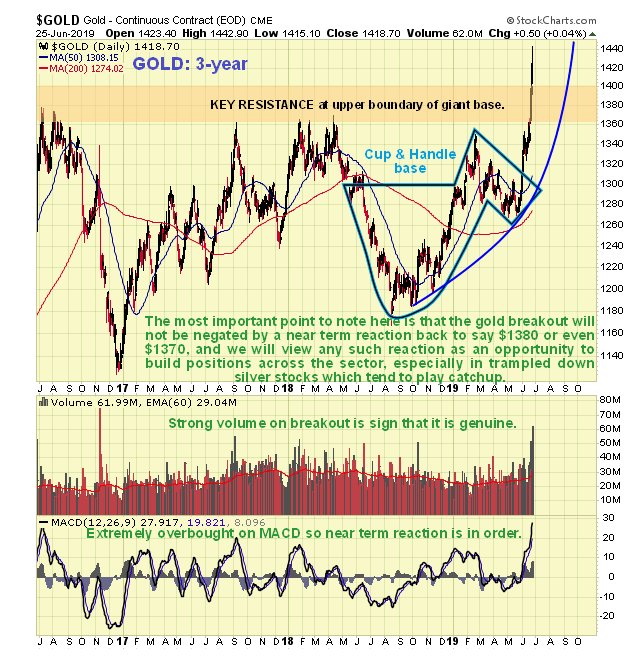 Fundamentally gold has everything going for it here. Central Banks are buying it hand over fist, major powers that have been bullied and threatened by the US, like China and Russia, are buying it hand over fist, in readiness for burying the dollar, and the Fed and other Central Banks have painted themselves into a corner where the only thing they can think of doing is printing money like crazy to try to stop the system from imploding. The world faces the grim prospect of massive unprecedented QE (State counterfeiting), negative interest rates, and the outright plunder of bank accounts, called bail-ins (theft) and they may even resort to thieving from retirement funds, and perhaps we can pre-empt them a bit here by thinking up a euphemism for it. What about PERG (Pensioners Expedite Rescue of Government)? It is a perfect storm that could cause gold to skyrocket.

Finally, let us wheel out our 10-year chart for gold yet again (nice easy cut and paste job) to remind ourselves of the enormous significance of this gold breakout. As we see, gold is breaking out of a giant 6-year long Head-and-Shoulders bottom / Saucer base pattern, which actually may be considered to be a lengthy reaction within a much larger bullmarket going to the early 2000s. This giant base pattern is capable of supporting a massive bullmarket that looks set to go way beyond the earlier highs in 2011. 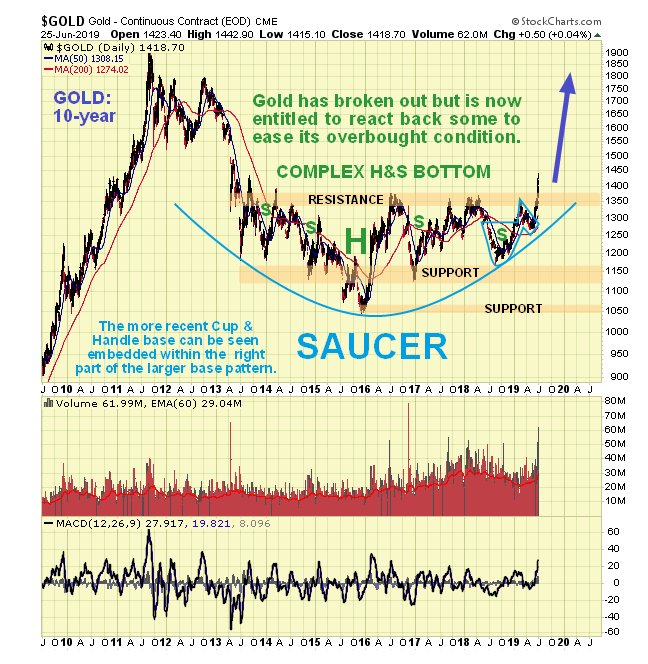