COPPER vs GOLD - two men enter, one man leaves...
Wednesday, October 16, 2019
Well, what a shame. Just when the survivalists had got their hopes up that they would actually be able to start using their vast stores of canned and freeze dried foods and unload some of their ammo magazines on waves of zombielike starving hordes lurching forwards relentlessly towards their bunkers, along comes the Fed and inaugurates QE4. QE4 has been launched in an almost clandestine manner, scarcely mentioned in the MSM, and started with a whimper rather than a bang as the Fed raced to plug the dyke when the repo market threatened to lock up a few weeks ago – but it’s nothing a few billion or trillion of freshly printed money can’t fix. And so it starts again. Whether it will work as well as it did on past occasions when it was used to kick the can down the road is something probably nobody knows. As the debt and derivative mountains continue to grow at even faster rates, the system is becoming dangerously unstable, and at some point it may become impossible to firefight sudden liquidity problems, such as Deutsche Bank going belly up, but then we can surmise that when push comes to shove, any such crises will be immediately fixed with bailouts or massive cash infusions – if they aren’t the entire system will implode – there are only two eventual outcomes now – a systemic implosion or a trend to hyperinflation which will end the same way, only buy more time. From a practical standpoint, the advent of QE4, which the Fed started without even waiting for serious cracks to appear in the market, has been viewed by the army of debt junkies out there as a big green light to go “risk on” again – that is why the stockmarket has started to light up again as gold goes green around the gills. Why shouldn’t the stockmarket go up if you throw trillions of spirited into existence money at it?

Those of you familiar with the film Mad Max 3 Beyond Thunderdome, may remember the scene where the man with no name (played by Mel Gibson) and Blaster enter the Thunderdome for a fight to the death overseen by “Aunty”, with the crowd baying “Two men enter, one man leaves”. Right now we have a situation where copper and gold are squaring off against each other, as in the Thunderdome, and in this update we are going to look at which of them is likely to prevail. While copper and gold are not inimical to each other of course, they are at times contracyclical to each other because copper will rally if economic activity picks up, regardless of whether it is due to printing money, while gold, driven in part by fear and its appeal as a safe haven, gets relegated to a sideshow for a while. That appears to be about to happen, and as we will see, the charts give strong indications at this time that this is indeed the case.

We’ll start by contrasting the two 6-month charts for copper and gold. On gold’s chart we can see that upside momentum has died as a potential intermediate top pattern approaches completion.

In complete contrast we can see that downside momentum in copper has abated and it is on the point of swinging positive, as a potential Head-and-Shoulders bottom pattern completes. In addition, we can see that the Accum – Distrib line is surging, way outperforming price in the recent past. 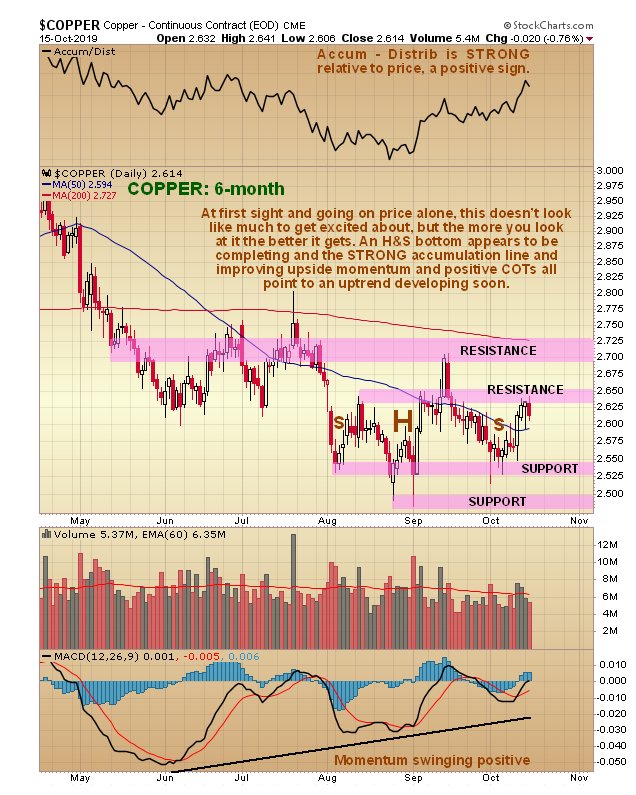 Now we’ll look at the COTs for each metal where we again see completely contrasting pictures. Starting with gold, we see that, although it has eased a little over the past couple of weeks, the Commercials still have a heavy short position, and given that these guys always come out on top in the end, this means trouble – it means a potentially severe correction is is probably starting. 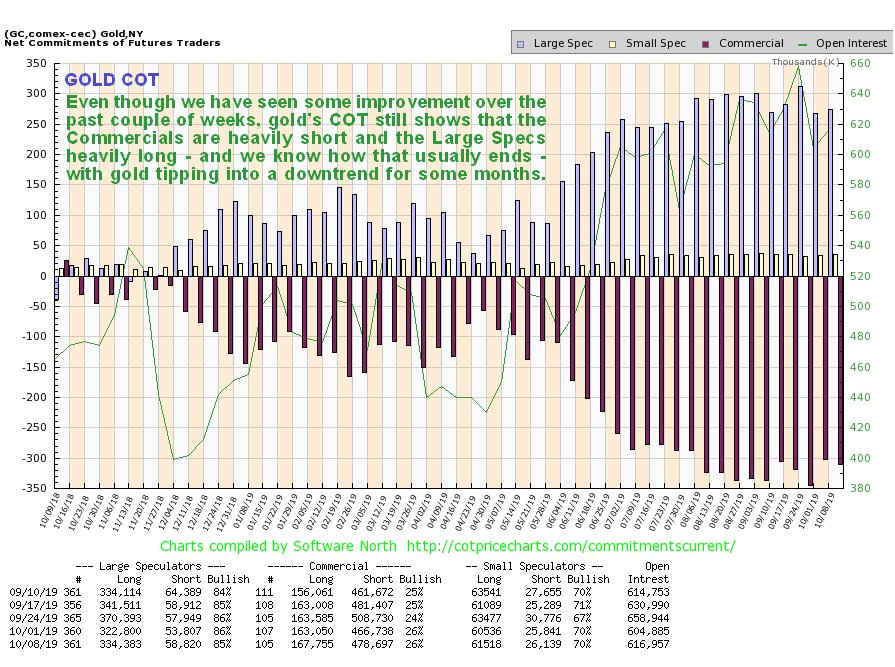 Click on chart to popup a larger, clearer version.
In complete contrast, the Commercials have built up big long positions in copper. They have held large long positions for some time now, which took a dip as copper rallied early in September, but they have built up again over the past several weeks so that they are now at high levels. This is interpreted as being probably as bullish as gold’s COTs are bearish, suggesting that the metals are likely to go in opposite directions over the intermediate term for the reasons given above. 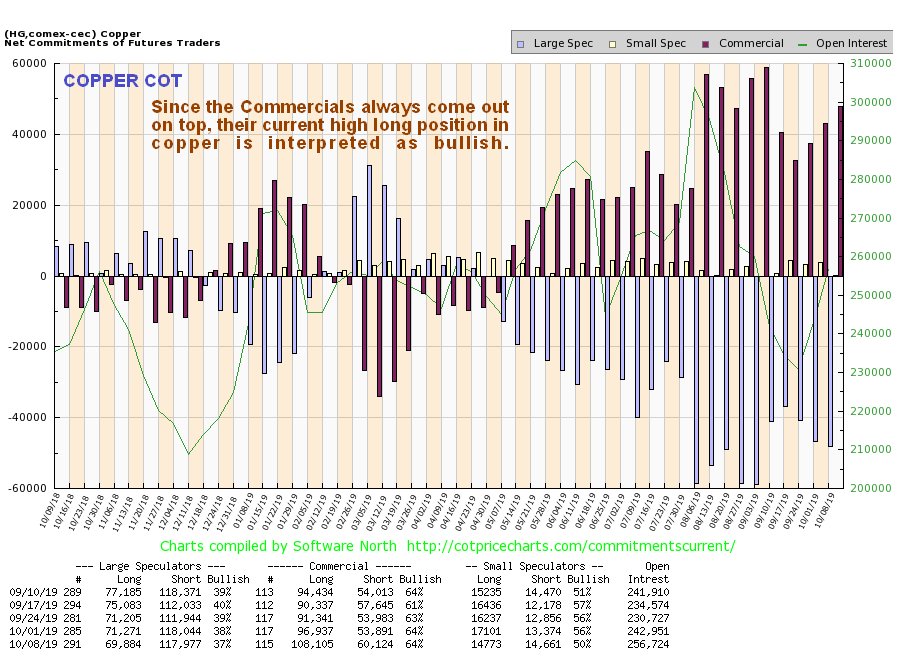 Click on chart to popup a larger, clearer version.
Now we’ll look at the Hedgers’ charts for both metals, which are a form of COT chart, and are useful as they go back 10 years, affording more perspective. Again starting with gold, we see that readings are at alarming extremes, equal to those of mid-Summer 2016 which led to a nasty slump, and recently reached their most extreme levels of the past 10 years (note that the red dotted line on this chart indicates when a bearish extreme has been reached, and the green a bullish extreme). This of course indicates a high probability that gold will soon drop back substantially). 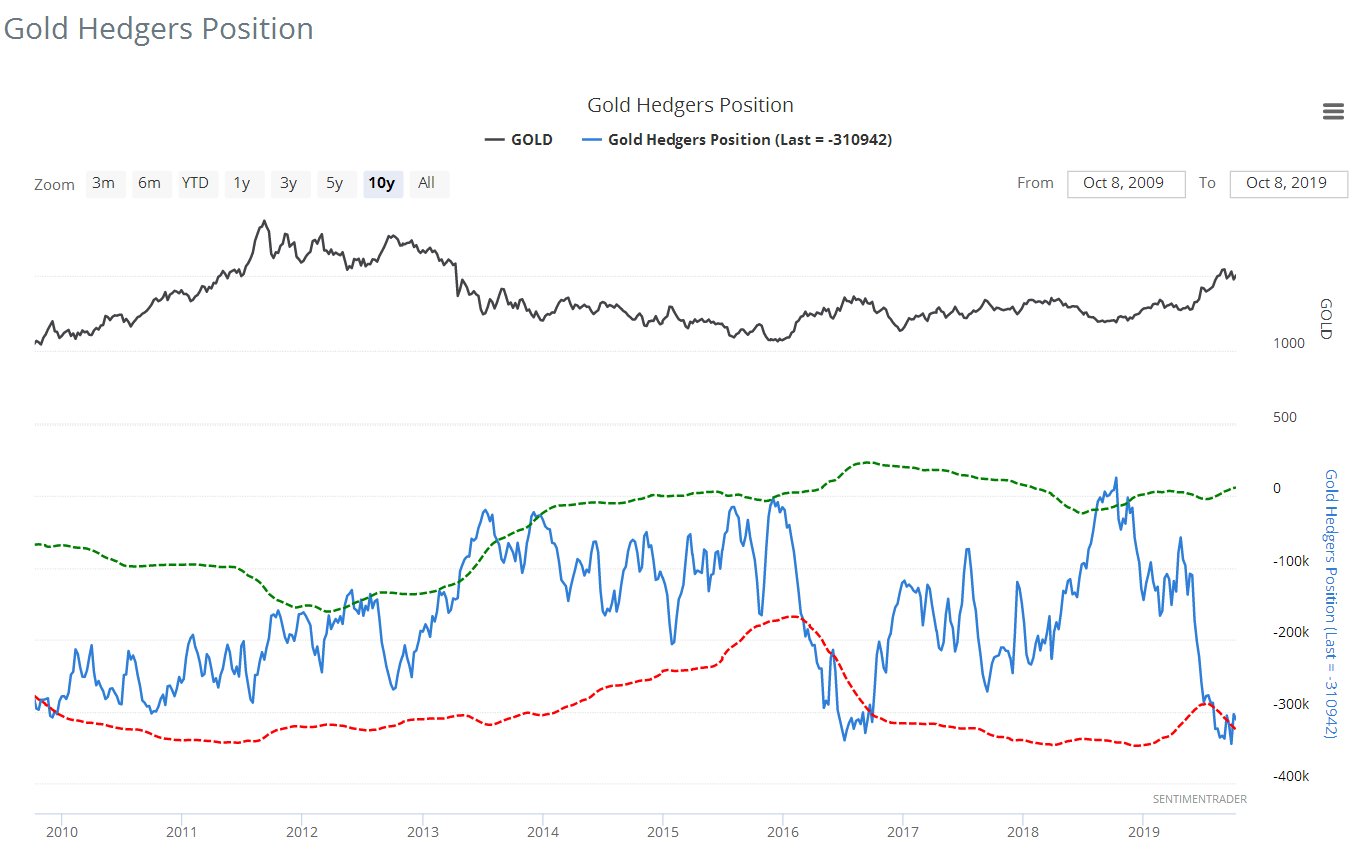 Click on chart to popup a larger, clearer version. Chart courtesy of sentimentrader.com
Finally, we see that the copper Hedgers’ chart shows just the opposite situation, with readings having recently 10-year extreme levels. However, extreme readings on the copper Hedgers chart often only lead to a relatively modest rally. 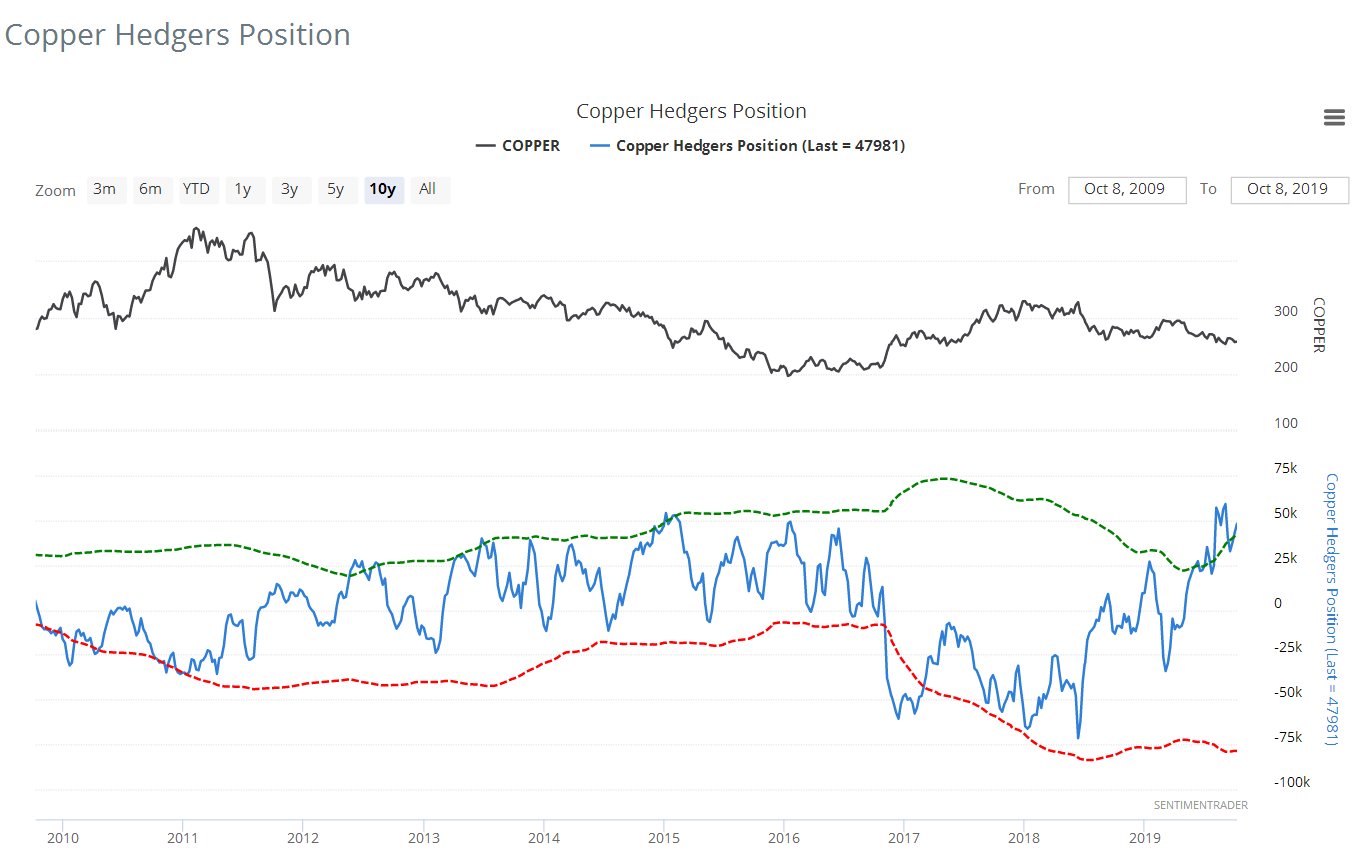 Click on chart to popup a larger, clearer version. Chart courtesy of sentimentrader.com
The conclusion to all this is that copper is likely to rally and gold drop in the weeks ahead as we revert to a “risk on” environment again in response to QE4. Going forward we will be looking at appropriate strategies so that are aligned accordingly End of update.
Posted at 12.55 pm EDT on 16th October 19.