THE CASE FOR AGQ, SLV, SLV Calls, and USLV over the near-term...

THE CASE FOR AGQ, SLV, SLV Calls, and USLV over the near-term...
Thursday, March 19, 2020
Today in the late trade at about 3.30 pm EDT we went for Calls in iShares Silver Trust in the belief that there is quite a high probability of a snapback rally soon, following its brutal plunge of the past week or so, which came as a nasty shock to many PM sector investors (but not to us). There are a number of reasons for going for this trade. One is that silver is heavily oversold after its plunge of the past week or so, as we can see on its latest 6-month chart, and we know that the longer-term outlook for silver could scarcely be better with money printing ramping up on an unprecedented scale to nationalize large parts of the beleaguered US economy, and silver being cheaper relative to gold than it has ever been. While margin call afflicted investors have been forced to disgorge their silver during this period, they have played right into the hands of Big Money, who can mop up all their holdings on the cheap. For these reasons it is suspected that silver may have hit bottom here, although we are aware that there is some chance that there may be another leg down, which is why you should not “go overboard” buying these Calls. 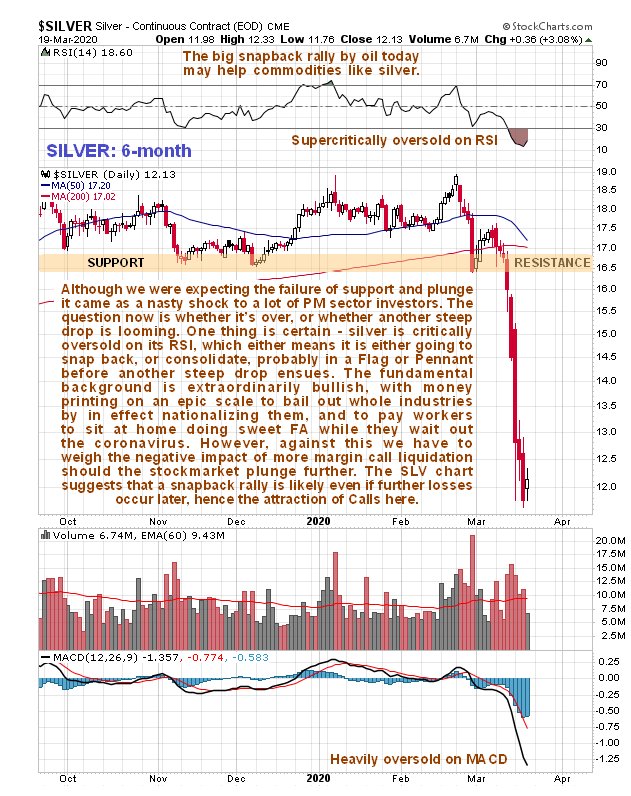 A big reason for going for SLV Calls here is the nature of the decline over the past week or two, which has been punctuated by first a breakaway gap, when it broke down, then a big runaway gap mid-drop and finally a suspected exhaustion gap a couple of days ago which suggests that the decline may have run its course. This is emphasized by the bottom looking candles of the past couple of days, in particular the small doji candle today, which together with the preceding day’s candle looks like a “harami cross” that will end up being a “morning star” reversal. Time will tell, but if this observation is correct, we may see a quite large white candle tomorrow, which is why we went for the Calls today. 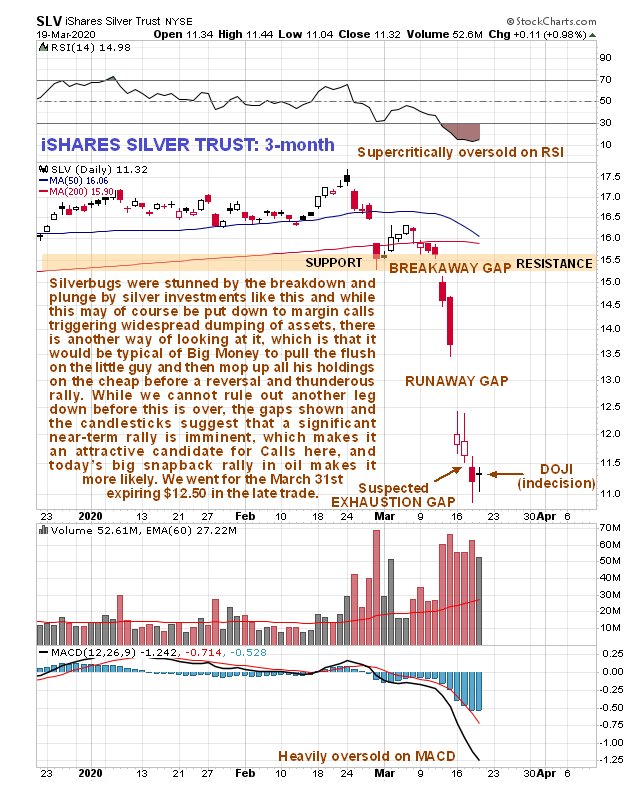 The series that we went for this afternoon was the March 31st expiring $12.50 strike Call option, which at that time was priced at about $0.28, and will still be a buy in the morning if it hasn’t moved too much, with the table below showing prices at the close… 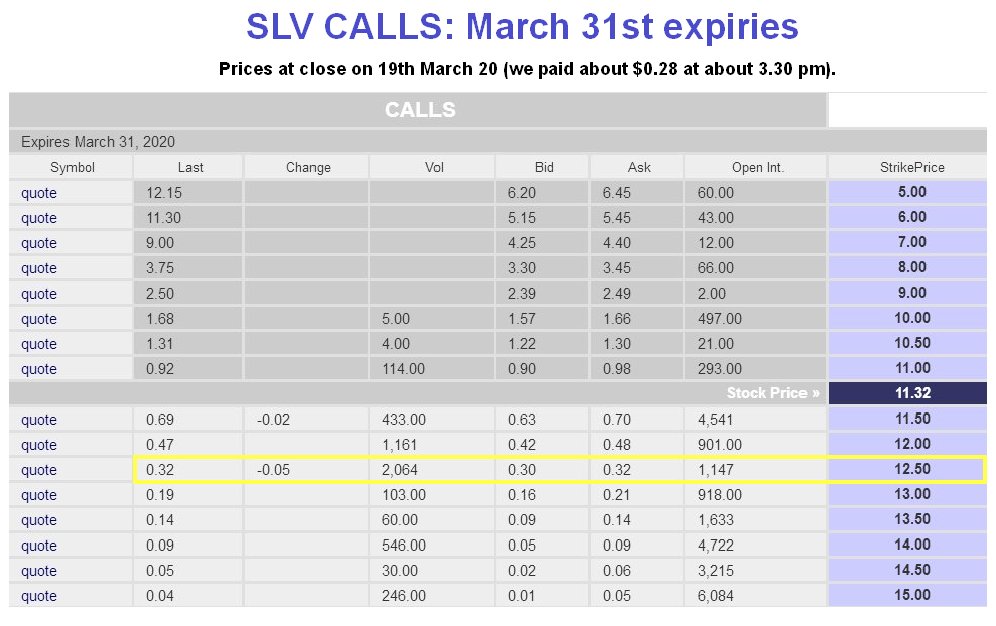 Table courtesy of bigcharts.com
Giving added weight to the bullish case is the big rise in oil today, which earlier called the stockmarket crash phase when it dropped hard, and the fine large reversal candle in copper today, which bodes well for the metals generally. Another factor which may be significant, is that even though the dollar had another big up day today, a rather large ugly looking bearish “belt hold” candle appeared on the chart for dollar proxy UUP, as we can see on its 6-month chart below. 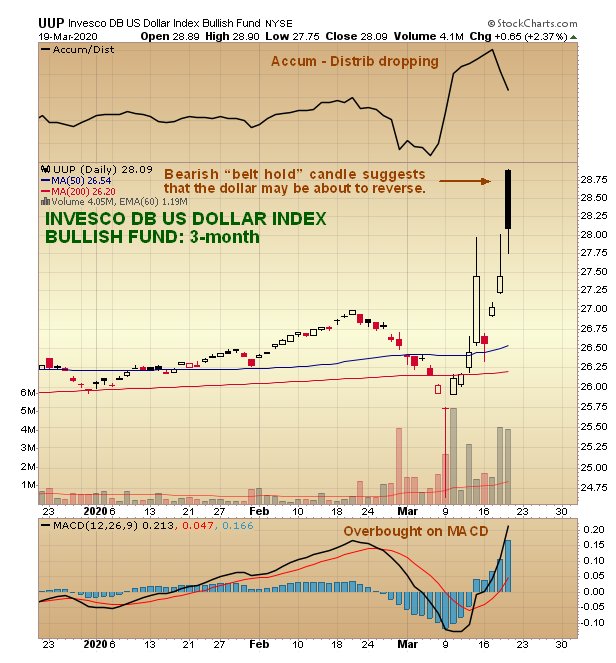 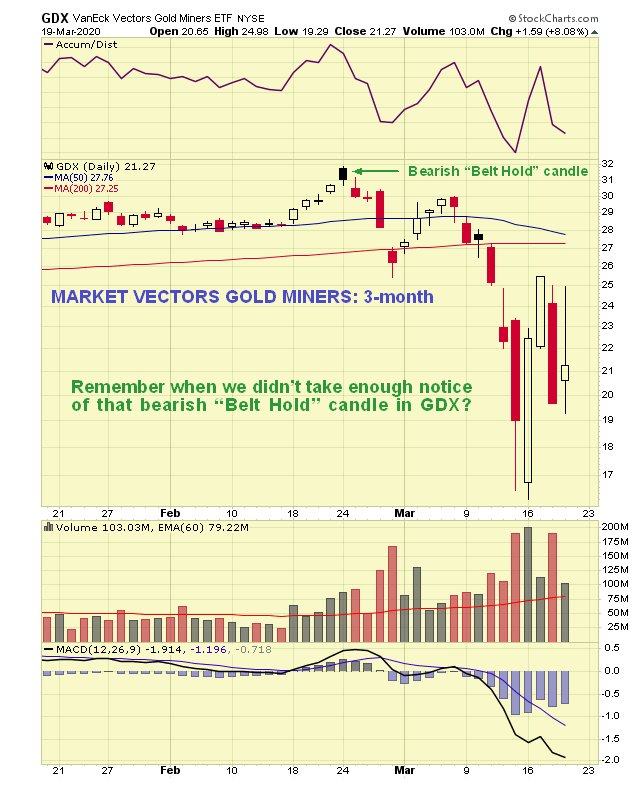 So, all in all, it looks like SLV – and other silver vehicles – may be about to stage a significant rally, and if it hasn’t moved much soon after the open, the Calls will be a buy again then, as will the twice leveraged silver ETF, AGQ, and the 3 times leverage silver ETF, USLV, and the advantage here is that because they haven’t moved yet, you can bang in a close stop to get you out for a minor loss if the trade doesn’t play out as we expect, assuming of course that they don’t open up much in the morning. 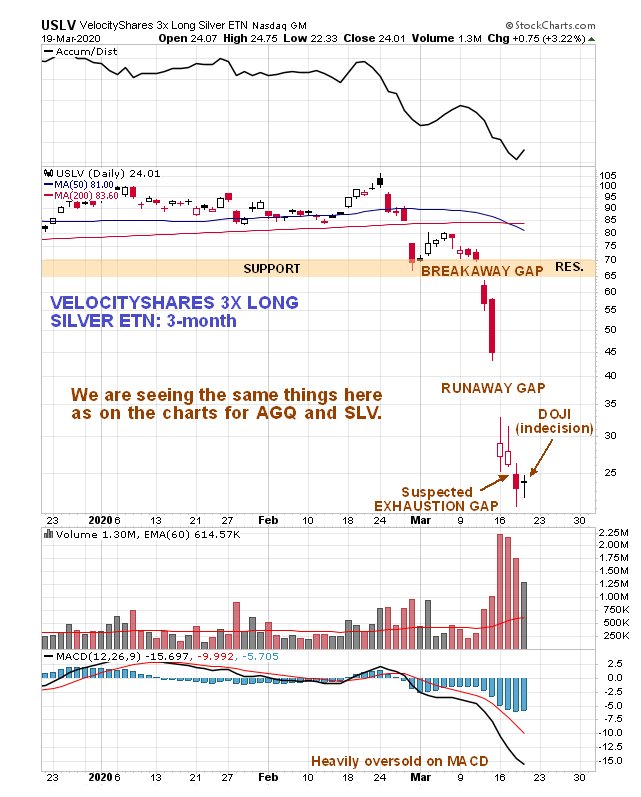