CANNABIS STOCK SET TO BREAK HIGHER AS SECTOR TAKES TURN FOR THE BETTER..

CANNABIS STOCK SET TO BREAK HIGHER AS SECTOR TAKES TURN FOR THE BETTER..
Sunday, May 17, 2020
We haven’t looked at the cannabis sector for a long time, which made sense because it has been out of favor and has put in a terrible performance. However, late last week there was an important development which signals a probable turn for the better. This development was that market bellwether Aurora Cannabis rose off its lows on stunning record volume when it revealed stellar results that appear to have taken the market completely by surprise. What these results appear to signify is a big increase in cannabis consumption due to people being stuck at home during the lockdown and given that the vaunted return to normal is likely to be a temporary phenomenon, this higher consumption looks likely to continue. On its latest 2-year chart we can see the severe bearmarket in Aurora since the peak of March last year that shaved about 96% of its value. The rise on massive record volume late last week is believed to mark the end of it, and as we can see it rose 68% on Friday alone on colossal record volume. Despite this rise on record volume, it has yet to break out of its long-term downtrend, however, this move indicates that it is very probable that it will proceed to do so before much longer. Therefore if it should react back over the short-term it will be viewed as a buy. 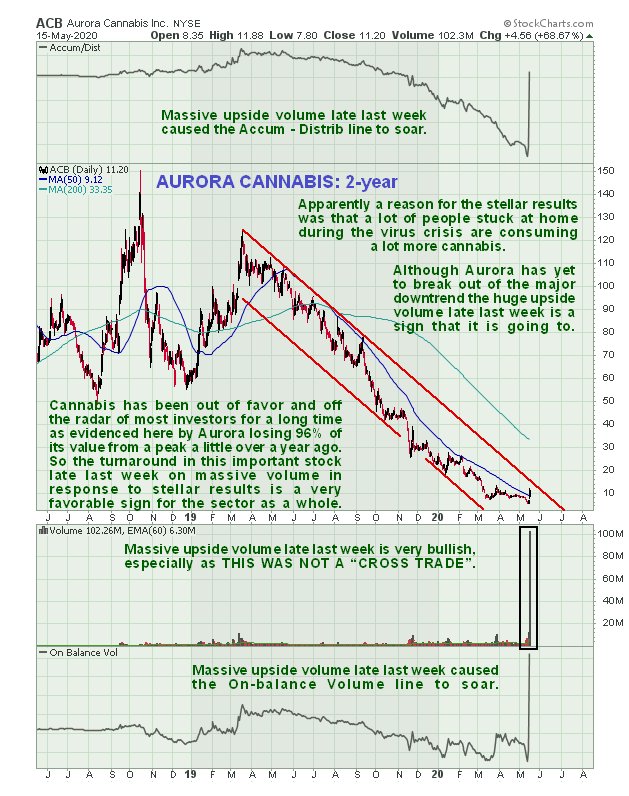 The reason for bringing up Aurora here is partly because of its positive implications for the sector, and in particular for a stock that we followed in the past, Captiva Verde Land, another smaller cannabis stock that just happens to be run by the same man leading Greenbriar Capital which we are also looking at today, that appears to be on the point of securing the giant Montalva solar project in Puerto Rico. Jeff Ciachurski has a very impressive record of creating successful companies and it looks like Captiva Verde is going to end up being another one. On its latest 6-month chart we can see that Captiva Verde got slammed by the market meltdown in March, which took down the entire cannabis sector. We bought this again back in February, and if you weren’t stopped out – you should have been as we saw this collapse coming – you are currently sat on a rather nasty loss, as it dropped hard when it broke down from the Head-and-Shoulders top shown. The good news is that if this is the case you should soon be presented with a chance to get out almost even as it appears to be completing a Head-and-Shoulders bottom of similar magnitude to the top. Otherwise it looks like a buy here for a breakout from this base leading to a quick advance to the resistance shown at the underside of the H&S top that will, if it occurs, result in a approx. 50% gain in short order. Positive factors to observe on the chart that support this forecast are that the falling 50-day moving average has now completely closed the gap with the price, while the 200-day is still in favorable alignment, the way that the momentum (MACD indicator) is now swinging positive and the Accumulation line which is positive relative to price. 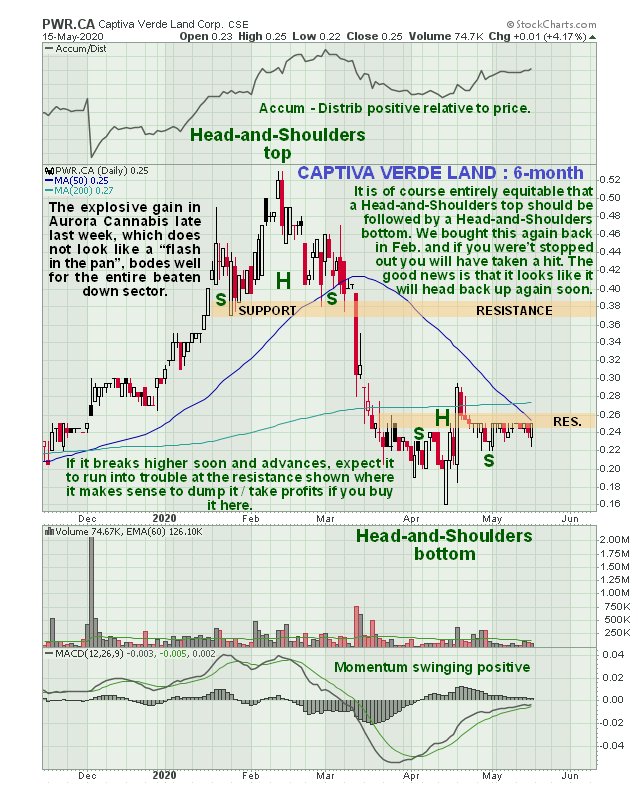 The 20-month chart reveals why the recent decline halted where it did – the price had arrived at a zone of strong support in the vicinity of a run of lows that marked the lower boundary of last year’s large trading range. An additional point to observe on this chart is that the On-balance Volume line is also positive relative to price. Finally it looks like Jeff Ciachurski will shift his focus to this company once he has completed work on the Greenbriar deal in Puerto Rico, which is as noted in today’s article on Greenbriar should happen this coming week. 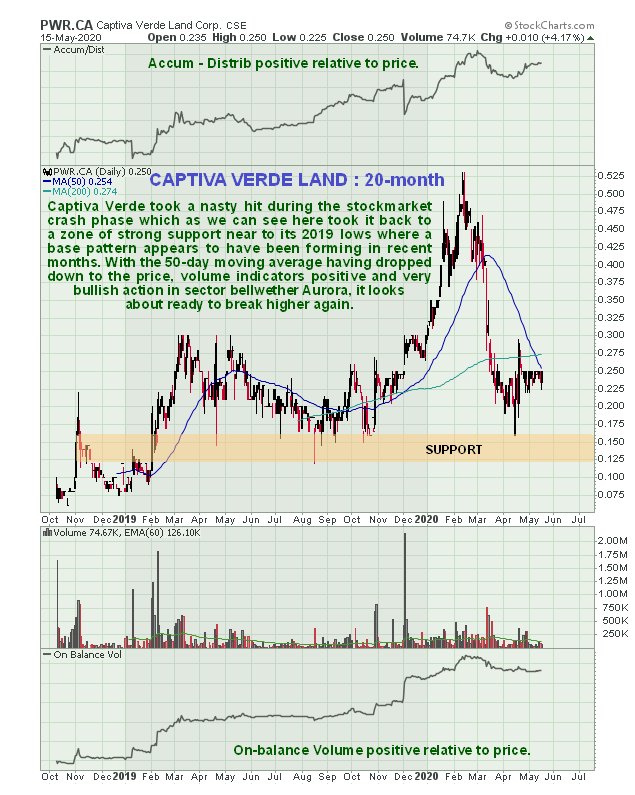 To conclude, Captiva Verde looks like a buy here for a breakout leading to a rapid runup to the C$0.36 – C$0.38 area. If this occurs to plan, profits should be taken in this zone because of the quite heavy resistance above it. More substantial stock Aurora Cannabis will be a buy on any near-term weakness which we will look out for. Captiva Verde website Captiva Verde Land Corp, PWR.CSX, CPIVF on OTC, closed at C$0.25, $0.18 on 15th May 20.
Posted at 4.45 pm EDT on 17th May 20.