TECH SECTOR MELTUP update - better not tell the Robinhood crowd...
Sunday, July 26, 2020
It has been a long time since we took stock of the Tech sector as a whole by looking at an index like the NASDAQ Composite and with it becoming decidedly frothy and having observed in yesterday’s Oil Market update that it may be riding for a fall, it is thought timely to review it now, as it is obviously of major importance for many individual Tech stocks. We will start by looking at a very long-term chart for the NASDAQ Composite going way back to 1980, the reason being so that we can compare the current monstrous debt fuelled bubble in the sector to the only one that preceded it, the famous, or perhaps we should say infamous Tech bubble which peaked in the year 2000, which saw a lot of investors get rich quick and then a lot ruined almost as fast. The 1st Tech bubble clearly took the form of a classic parabolic blowoff move and the same seems to be happening now. What is really bizarre this time round however, is that the latest stages of this bubble, the advance to new highs of recent months, have occurred at a time when the economy is collapsing due to the effects of the imploding debt bubble being intentionally exacerbated by a gross over reaction to the virus pandemic. The two main factors driving this market higher in recent months have been massive liquidity creation by the Fed coupled with lots of “get rich quick” 30 and 40 somethings stuck at home and feverishly trading via Robinhood accounts etc. So far it has worked for them, but sadly they are likely to end up like those who didn’t know when to give it a rest in 2000. 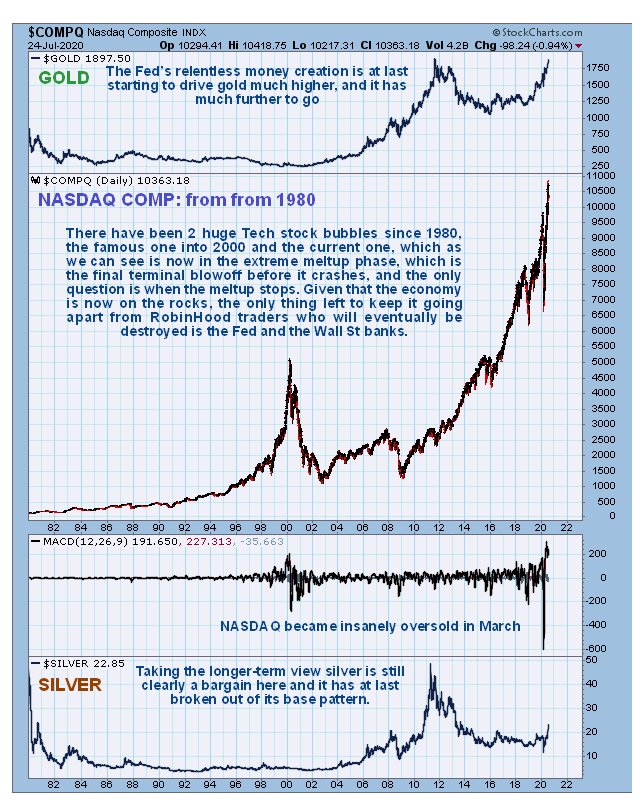 The “inconvenient truth” in all this is that with the economy collapsing and people becoming unemployed and getting poorer, sooner or later Tech sector investors are going to be forced to face the reality that most companies in the sector will be making less money – or no money, and when that happens it will crash. There is a widespread and mistaken belief that this virus pandemic is just a passing phase, and that, sooner or later, things will return to normal, but as we will now proceed to see, that is not going to happen. Because of its huge implications for the markets it is not “off topic” for us to stop and consider what this virus pandemic is all about, because if we can figure this out, we will have a better idea where markets are headed. First of all it should be clear that the world is in the grip of an orchestrated mass psychosis, the biggest psyop (psychological operation) of all time with the threat posed by the virus massively exaggerated by the compromised mainstream media and leading figures in the medical profession in order to further various agendas, with much of the data regarding cases and deaths due to Covid-19 being fraudulent and grossly exaggerated – basically anyone who dies of anything is said to have died of it. I have given this matter considerable thought and read up widely on the subject in an effort to get to the bottom of it, and following are my findings, my deductions and conclusions, but if any of you have anything worthwhile to add that I might have missed I will be pleased to hear from you, although I may not be able to reply to all mails because of time limitations. 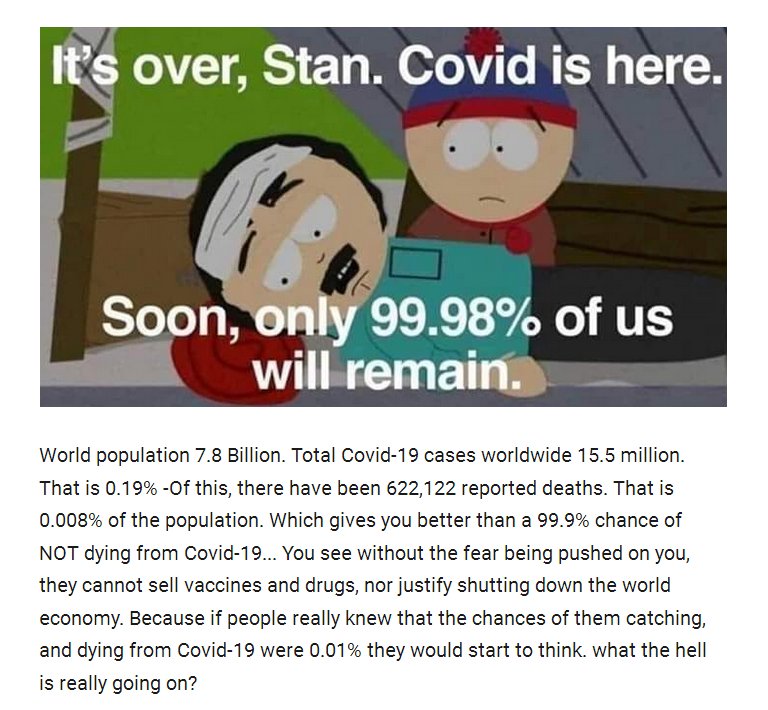 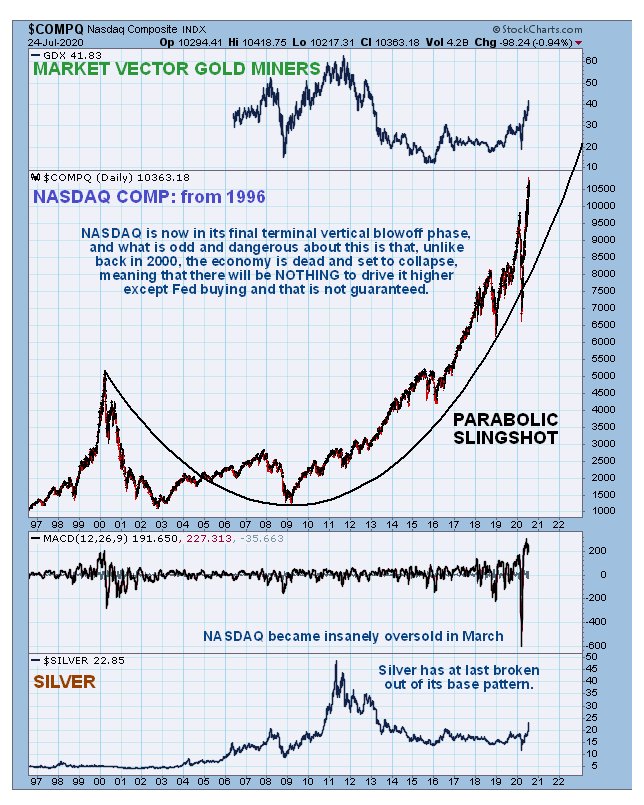 Now we’ll try to make sense of more recent action in the NASDAQ Composite by means of the 3-year chart. This is an interesting chart for on it we see that what may be happening is that it is forming a giant “Flat bottomed Broadening Formation” which is bearish. We have seen some really extreme action in recent weeks with it apparently busting out of the top of this pattern, doubtless fuelled by over-enthusiastic RobinHood traders stuck at home who have gotten it into their heads that this market only goes up. What this looks like is a “throwover breakout”, a bull trap that could be followed by a brutal “crash and burn” scenario, especially given what we have just observed on oil’s charts and this is made more likely by the psychological impact in the US of the imminent scaling down of unemployment payments and the approaching end of mortgage payment forbearance, although we cannot totally rule out that the Fed plays Santa Claus and intervenes again to save the day – unless of course they want to get rid of Trump, since it will make it easier for Joe Biden to win if they let the markets tumble now (they can always goose them up again later) so that he can proclaim in his victory speech that he has “beaten Reagan by a landslide”. 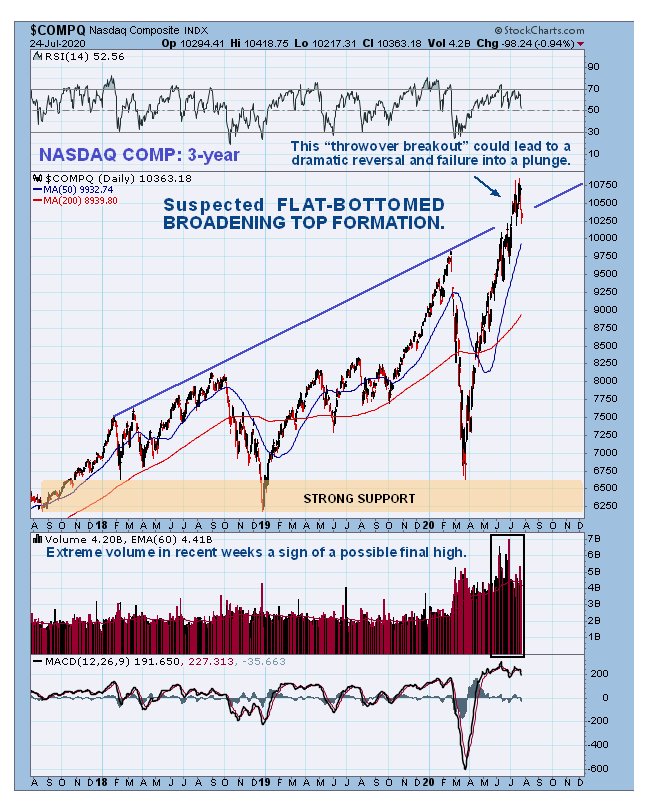 Now we’ll conclude by looking at the shorter-term 5-month chart. As we can see calling a top in this market is certainly a dangerous game, and it is considered foolhardy to contemplate shorting it at least until it breaks down from the steady uptrend channel – it is not until you refer back to our 3-year chart that you truly appreciate that this channel is actually pretty steep. However, the longer this uptrend goes on the more dangerous it becomes, especially given that the real world economy is actually imploding. A breach of the uptrend channel will be the 1st warning of a potential major breakdown, and if it then proceeds to drop below the rising 50-day moving average it will open up the risk of a brutal vertical plunge as speculators jam the exits in a frantic dash for safety. 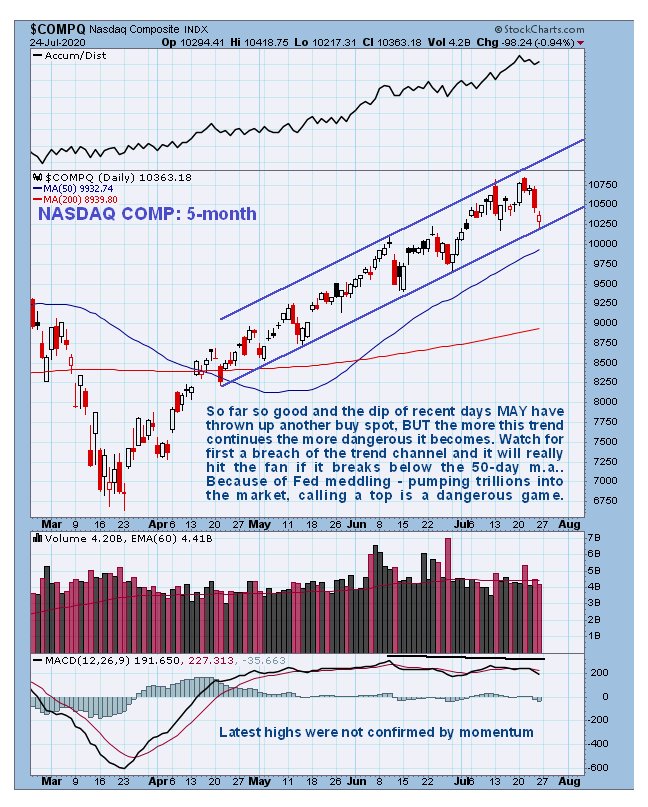 Your attention is drawn to a timely recent article by Charles Hugh Smith entitled The Sinking Titanic’s Great Pumps Finally Fail, in which he compares the US economy to the Titanic after it hit the iceberg. Although this is an analogy that has perhaps been overworked in the past, this time it is truer than ever. As he says “Now we have the Great Pumps of Federal Reserve money-printing and Stimulus, which in a close analogy are pumping trillions of dollars into the sinking U.S. economy. But just as the engines of the Titanic lost power as the water extinguished the boilers supplying steam to the engines, so the stimulus is only keeping the rising water temporarily at bay - it is not actually saving the "engines" of the economy from sputtering.”
Obviously the observations made here have important implications for some of our positions which we will factor in going forward, and as ever we should be able to turn the situation to our advantage.
End of update.