Silver Market Update - OPTIMAL BUY ZONE AFTER NEARLY 2-YEAR CONSOLIDATION...
Sunday, June 12, 2022
SILVER INTERIM UPDATE - at bottom of trading range and at strong support...
Wednesday, October 06, 2021
SILVER REVIEW at KEY JUNCTURE...
Thursday, July 29, 2021
On shorter-term charts it had looked like a bear Flag was building out in silver but this doesn’t fit with what we are seeing on its longer-term charts or with the action in gold and PM stocks late last week, especially on Friday. On silver’s 6-month chart we can see how, after breaking out of a steep downtrend in force from mid-April through mid-May, silver had crept incrementally higher with its moving averages in increasingly bearish alignment, which is why the pattern looked like a bear Flag but as we will see, the low it hit in mid-May was in a zone of strong support at the top of a giant Cup pattern, and its Accumulation line started to climb late last week with a rather bullish looking candle forming on Friday on good volume with much more decisively bullish candles appearing on the charts for gold and GDX at the same time. 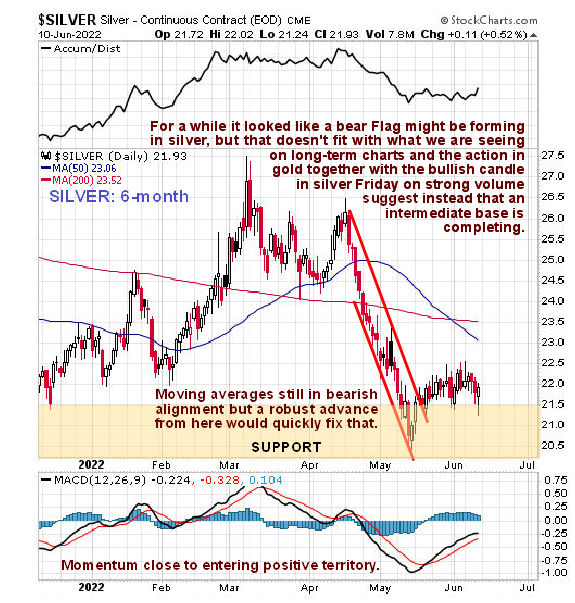 Now we will zoom right out to see why the setup is potentially much more bullish than might be supposed from the still weak looking shorter-term charts. On the long-term 13-year chart we can see that the big picture is of a giant Cup & Handle base completing, which, if this interpretation is correct, means that we are at a great “buy spot” here with the price being in a zone of strong support at the upper boundary of the Cup part of the pattern and at the lower boundary of the trading range that has formed since August 20 which constitutes the “Handle” of the pattern. The Cup can also be seen to be comprised of a Double Bottom and we can ignore the freak March 2020 general market panic low that occurred prior to the Fed throwing open the spigots. Following the mid-2020 strong breakout move, silver has been consolidating in the trading range that is the Handle part of the Cup & Handle base that looks like it is close to completion, with the strong Accumulation line since mid-2020 supporting the bullish case as does the currently positive look of the charts for gold and GDX. 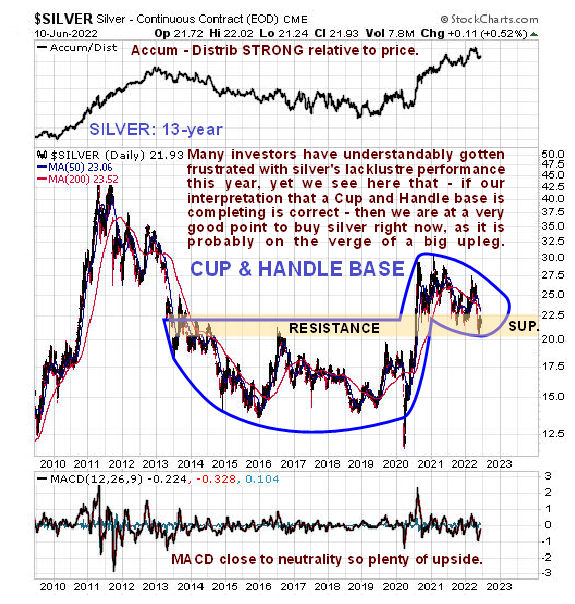 Having figured out what is probably going on on the long-term chart we will finish by looking at the 28-month chart that shows the latter part of the Cup and the Handle of the pattern in more detail. This shows how silver has been stuck in a trading range since August 2020, and superficially the picture appears to be gradually weakening with a trend of lower lows and moving averages in bearish alignment, yet since we have determined that this is likely the completing Handle of a giant Cup & Handle this is a situation where things can and should take a rapid turn for the better. This is therefore considered to be a very facvorable time to make investments in silver and silver stocks. 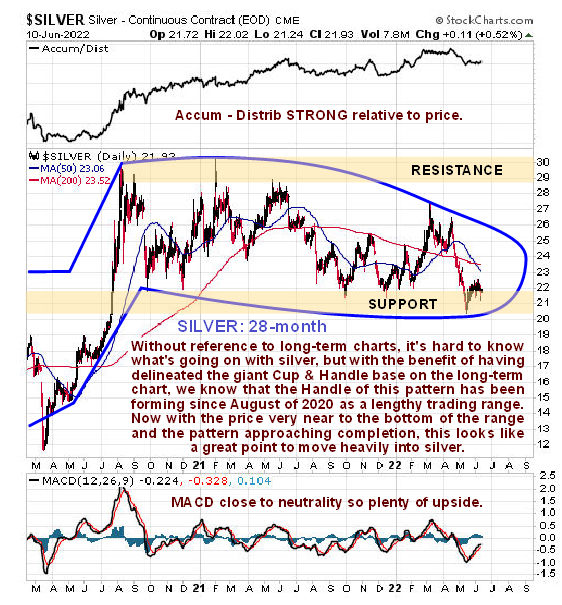