As you are, or should be, aware the big market plunge on Friday came as no surprise to us – it was predicted just a few days before in the article BROAD US STOCKMARKET MELTUP update, in which the point was made that habitual victims Mom and Pop were at last getting stuck into the market, making the danger of a violent reversal even greater. 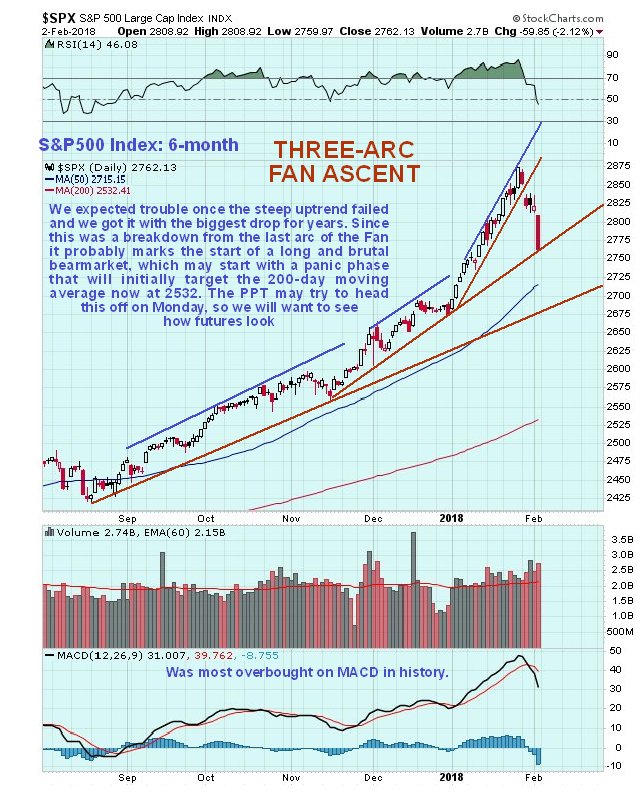 So what now? – does Friday’s savage drop mark the start of a crash phase and the onset of a major bearmarket – probably, given how extended this market has become. Unless the market can be stabilized at or above its 50-day moving average on the S&P500, it is likely to plummet back to its 200-day now at 2532 as an initial downside objective. The 3-arc Fan Ascent shown on our chart, that we had earlier delineated, is akin to a parabolic blowoff, and breakdown from the 3rd fanline basically means “game over”.

What should distinguish this bearmarket from the one in 2008 is that investors are not going to be able to find safehaven in the Treasury market, which is already plummeting and a reason why the stockmarket has a last started to cave in as interest rates spike – see the article CONTROLLED DEMOLITION OF THE MARKETS in which we examine long-term charts for the dollar and for the Treasury long bond proxy TLT, with the latter looking very bearish indeed. One big reason for this is that back in 2008, there was room to lower rates, but now, since official rates are near 0 to start with, and debts are at crushing astronomic levels, this policy tool no longer exists. We can see on the chart for Treasury long-term bond proxy TLT that it has broken down and is now dropping like a rock. This time round investors look set to be hit by a “double whammy” with both the bond and the stockmarkets dropping in tandem and the higher rates exacerbating the stock bearmarket and resulting economic depression, especially for those who have fallen for the hype and gone on a debt-fuelled spending binge. 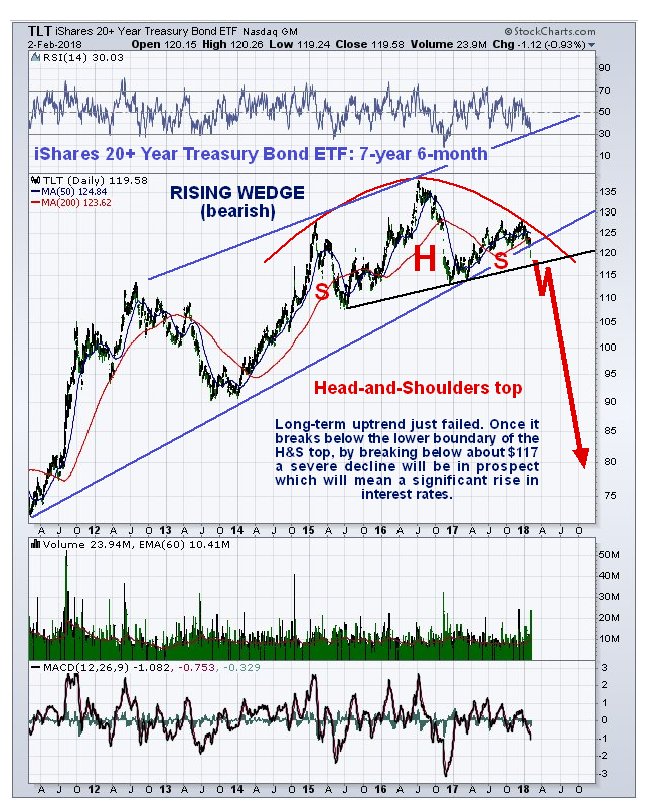 With Treasuries no longer serving as a bolthole, panicking investors are going to have to scurry into something else – like gold and silver, which should rise to prominence as this crisis deepens. Alright you say, so why did they drop hard on Friday? That was the old “throwing out the baby with the bathwater” phenomenon, where panicking investors, sometimes facing margin calls, sell anything they can lay their hands on. History shows, however, that the broad stockmarket and the PM sector are contracyclical, meaning that they move in opposite directions. Adam Hamilton has recently written a very good essay about this entitled Stock Selloffs Great for Gold making it plain that this is indeed the case. This does not mean though that they won’t drop in unison during brief periods when blind panic sets in. The way for PM sector investors to handle the panic periods, which are usually short and early on in the broad stock bearmarket, is to either hedge positions with Puts or step aside and buy back later. As the bearmarket morphs into a gruelling and seemingly endless downtrend, PM stocks are expected to advance in a secular bullmarket that will result spectacular gains in many from current levels. 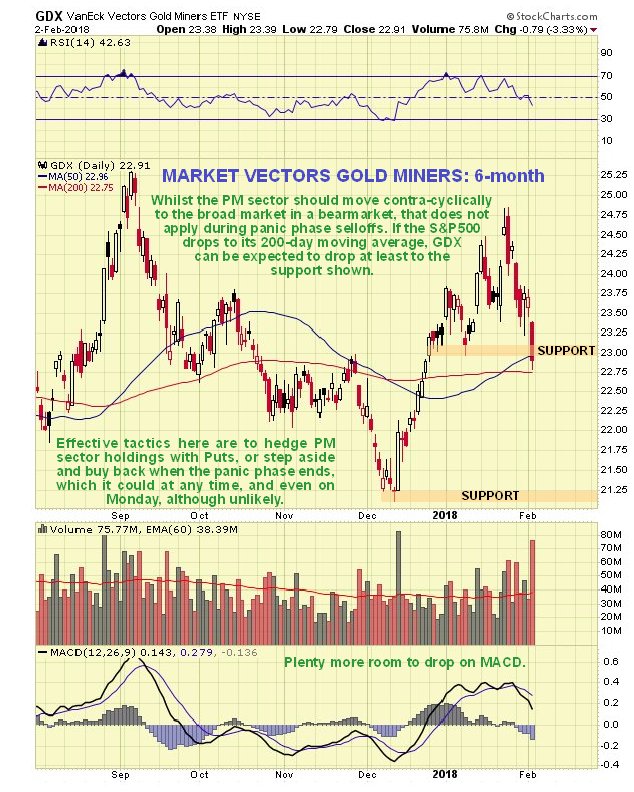 Generally we have done well in the recent past and kept out of harm’s way. You were warned, any of you who owned it, to offload Bitcoin at the top. We rode the cannabis stocks boom in December and sold them at the top. We gave them another go more recently, but quickly spotted that the breakout was false and dumped them, dodging the heavy losses that have since followed. We were late to the Blockchain party, made some gains, but again, dropped them like hot potatoes when we realized the danger that this sector was about to plummet, which it has since. We should perhaps have been more forward about buying inverse ETFs and Puts before this latest broad market drop, and not been put off by having got burned buying some SPY Puts a week too early, since we knew it was coming. Oil looks like the next target for a brutal decline.

In the recent past we have gone for a number of stocks which look set to rise due to their individual merits, and so far they are looking alright, and we will be looking at a few more of them in coming days. Don’t forget that even during the great crash of 1929 – 32, some stocks actually rose, although there were no screens in those days – you had to wait for the newspaper to arrive to see what had happened.

So, we will wait to see how futures look set to open on Monday, and whether the PPT (Plunge Protection Team), considerably more powerful these days, and with much more largesse than the impoverished downtrodden little guy, can hold back the floodgates.