Today, after another devastating day in the markets we are going to stand back and take a “big picture” view of what is going on.

This is not some ordinary run-of-the mill bearmarket that is starting here – it is the beginning of a devastating collapse that is necessary to clear the system of all the accumulated dross that has built over many years. A “reset” is an apt word to describe it.

The rot can really be traced back to when Nixon got rid of the gold standard in 1971, or in other words got rid of sound money. This gave governments and politicians carte blanche to print more and more money and to go ever deeper into debt, since the greater the debt, the more money they could print to service it. The situation was exacerbated in the United States because, being in possession of the global reserve currency, it could ramp the debt ever higher without collapsing the currency, because so many dollars and government debt are held by foreigners spreading the load of the real devaluation of the currency, hence the unending farce of the debt ceiling, which is always being raised. The last chance to clean up this mess presented itself in 2008, when the system went into a state of cardiac arrest, but instead, as a result of a combination of cowardice, greed and expediency by powerful vested interests, they elected to “paper over the cracks” employing more of the same measures that created the mess in the first place, i.e. growth in the money supply and expansion of debt and the labyrinthine spreading of risk via derivatives, and to ramp them up at a much greater rate by means of Quantitative Easing, and thus push the day of reckoning off into the future as far as possible – now they have arrived at the point where they can postpone it no longer, although that won’t stop them trying.

Debt continued to grow exponentially in recent years at all levels, including corporate debt, federal debt, municipal debt and private debt with the result that the only way to keep the game going and stop things from coming apart at the seams was to artificially suppress interest rates, and the longer this went on the more complex was the financial engineering required to stop the house of cards from collapsing. The very low rates further afforded CEO’s the opportunity to “window dress” their earnings per share by borrowing to buy back their own stock, the better to justify fat bonuses for themselves, and the government, particularly under Trump, was happy to go along with it as it drove the stockmarket ever higher, regardless of the fact that the stockmarket’s performance ceased to be a measure of the state of the real economy. Meanwhile the middle class came under ever more pressure as real inflation ran way ahead of the CPI, which is a fabrication.

They pushed things to the absolute limit so that although the stockmarket rose endlessly due to all the money printing, the economy was stagnant. Then, when the system had become dangerously unstable as a result of the endless expansion and leveraging of debt and derivatives, along came a major “black swan” in the form of the coronavirus. This was the last straw for the markets which have gone into an unstoppable meltdown, exacerbated by the collapse of the oil sector, which in turn is pulling the plug on the credit markets, that have depended in large part on oil investments as collateral.

With liquidity drying up and margin calls going out, the markets have gone “cold turkey” and like the junkies that they are, they are looking for someone or something to give them another big fix, i.e. an almighty cash infusion, and since the amounts required are now beyond the capacity of even Central Banks they are looking to governments themselves for a bailout – what they euphemistically call “fiscal stimulus”, which is a polite way of saying that they expect society to bail them out again as in 2008. Trump made noises yesterday to the effect that a rescue is being organized and markets rose on this expectation but then threw a tantrum and tanked today when it was not forthcoming, although it likely is soon. The government has no problem at all stepping up to the plate and bailing out the markets, after all it’s not their money, and they are more than happy to bail out their elite friends in the banks and on Wall St, and push the bill off onto the hapless man in the street, as usual. Right now markets are at record insanely oversold extremes, so we could easily see a 2000 point snapback rally in the Dow when stimulus in forthcoming, although until it is announced, it could drop even more.

However, while the announcement of a massive rescue package might produce a stunning short covering rally, it will not mean we are “out of the woods” at all because the damage wrought on the credit markets by the collapse in the oil market will not be undone by any such stimulus which will not get the oil price back up, and then we have the intensifying coronavirus crisis especially in the US to contend with, which will cause massive disruption, as it is already doing in Italy. These factors should see the markets drop again with a 2nd leg down to new lows after the current massively oversold condition is perhaps unwound or partially unwound by a stimulus induced short-covering rally.

The 2 charts shown below are intended to give you a “big picture” perspective. The 1st of them is the 13-year chart for the S&P500 index that shows the entire bullmarket from its inception early in 2009, which makes two important points very clear. The first point is that, compared to what came before it, this bearmarket has barely started yet, and it has much, much further to run in a decline that may take years to play out. The second point is that, on a short-term basis, it is record oversold by a country mile, making a near-term snapback rally a high probability soon, even if we see more downside first, which could of course be occasioned by the vaunted “stimulus package”. 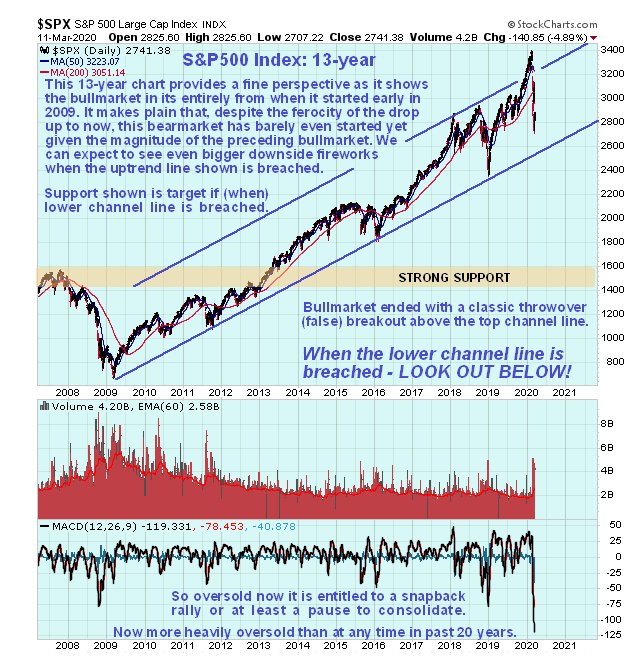 The second chart is a most interesting one that goes way back to 1980. It makes abundantly clear the magnitude of the massive bubble and how the market has a long, long way to drop, especially if we go into a deflationary phase. This chart also emphasizes even more how incredibly oversold the market is here (MACD). 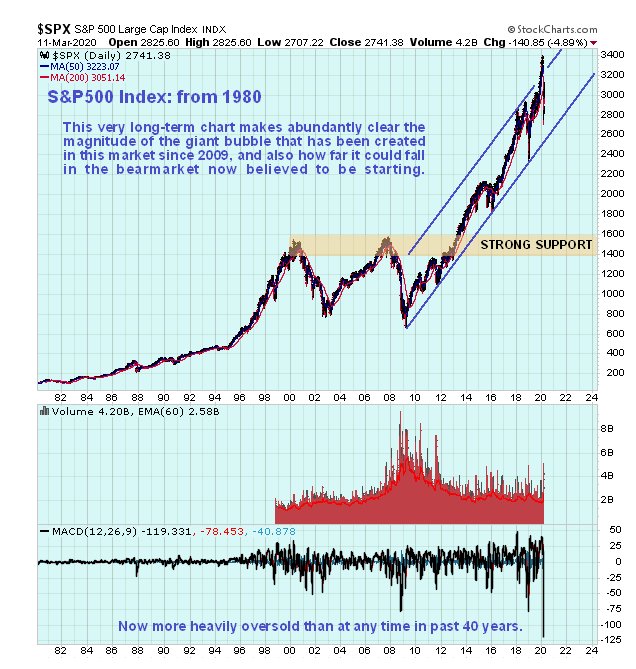 From this you should be able to divine an effective strategy for the near future. First off, it is probably best not to chase the market any lower here by means of further Puts or shorting, because it is so incredibly oversold, it is simply too dangerous. The Calls we bought yesterday should continue to be held, as they may come good if we see a huge short-covering spike on the announcement of stimulus which could happen very soon. Thereafter, the rally is thought likely to sour quickly because of the mayhem in the credit markets and the increasing coronavirus disruption, so we will be looking to short it again. 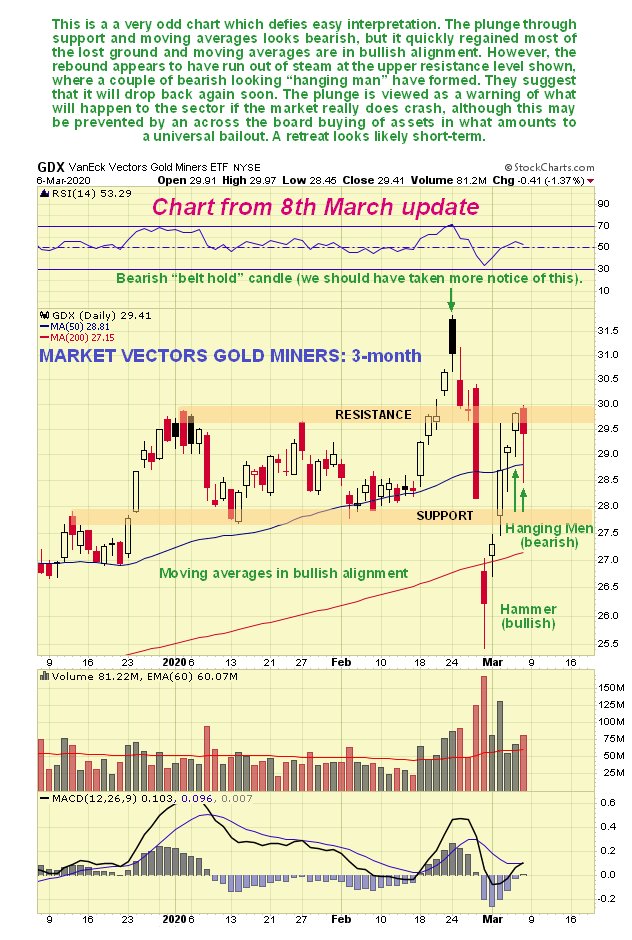 The same chart for the close on the 11th, showing the drop that has ensued… 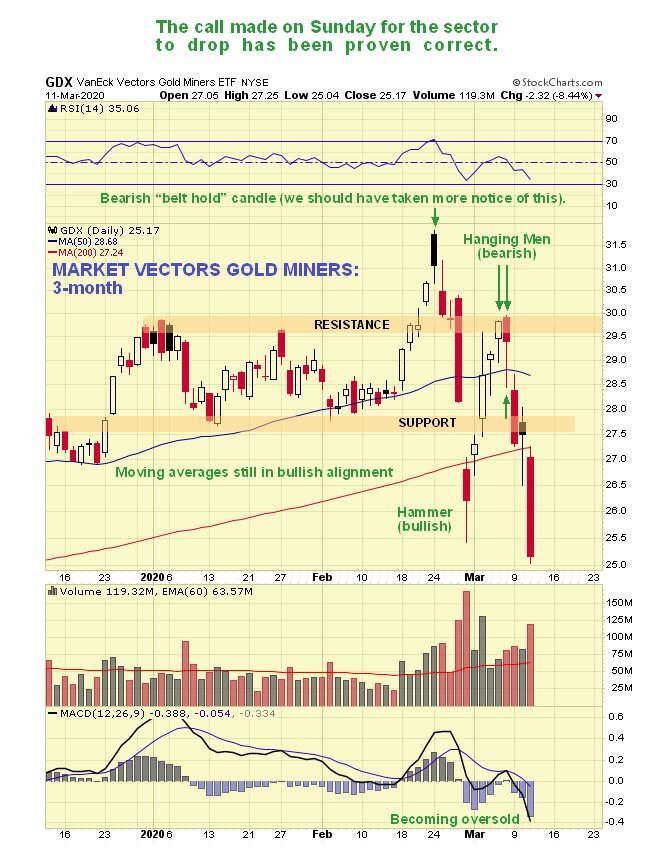 Before closing I want to bring your attention to some interesting audios / videos. The first is a pair of audios by “Dave” of the X22 Report, episode 2117a and episode 2117b which are interesting as they postulate that the crash has been engineered by the Deep State as a way to weaken Trump ahead of the Fall election. This is plausible, and is what we would expect them to do, but the Democrats don’t exactly help their cause by having as their 2 main candidates a couple of contenders who are so old that they look like they have been turned out of a nursing home, with one already having “lost his marbles” and the other a raving socialist / Marxist who thinks (other people’s) money grows on trees. Surely it would be kinder to put them in a nice comfortable chair with a cup of tea and a jigsaw puzzle to play with, although I understand that power-crazed Hillary is waiting in the wings to do just that and seize the power she has for so long lusted after – let’s just hope she pays them a visit in the Home and helps them find the missing piece for their jigsaw puzzle. According to this X22 report Trump knows what their game is, and is playing along, planning to turn the markets back up again and then claim the new bullmarket as his own, rather than something he inherited from Obama. This neat theory is all very well but completely ignores the fact that this imploding bubble is unlikely to be stopped by more government largesse for the reasons set out above.

Greg Mannarino produced an interesting video Monday morning in the midst of the brutal Sunday night - Monday selloff, which is worth watching as he makes some insightful observations that are of lasting value, not least of which is that the US is run by a “kleptocracy” – we kind of knew that already, but this word encapsulates their nature perfectly.