At first glance gold looks like it may be about to advance out of a bull Flag, but there are a number of factors in play that we will examine which suggest that any near-term advance won’t get far before it turns and drops again, and that a longer period of consolidation and perhaps reaction is necessary before it makes significant further progress.

On the 6-month chart we can see how gold stabbed into a zone of strong resistance on the Iran crisis around the time Iran’s General was murdered, but after a couple of bearish looking candles with high upper shadows formed, it backed off into what many are taking to be a bull Flag. 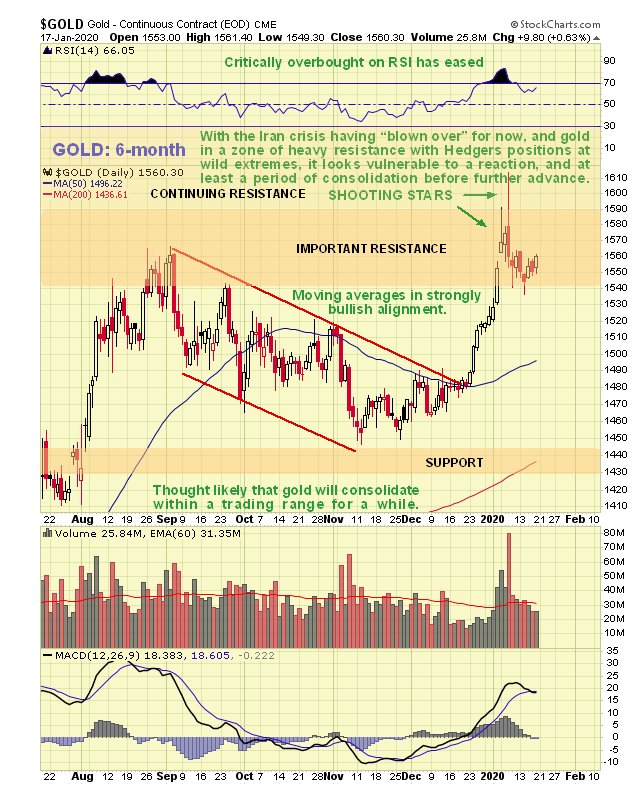 The 10-year chart makes it plain why gold is vulnerable here to reacting back over the short to medium-term, because it has advanced deep into “enemy territory” – the broad band of heavy resistance approaching the 2011 highs, with a zone of particularly strong resistance right where it is now. It would be healthier and increase gold’s chances of breaking out to new highs if it now backed off into a trading range for a while to moderate what now looks like excessive bullishness. 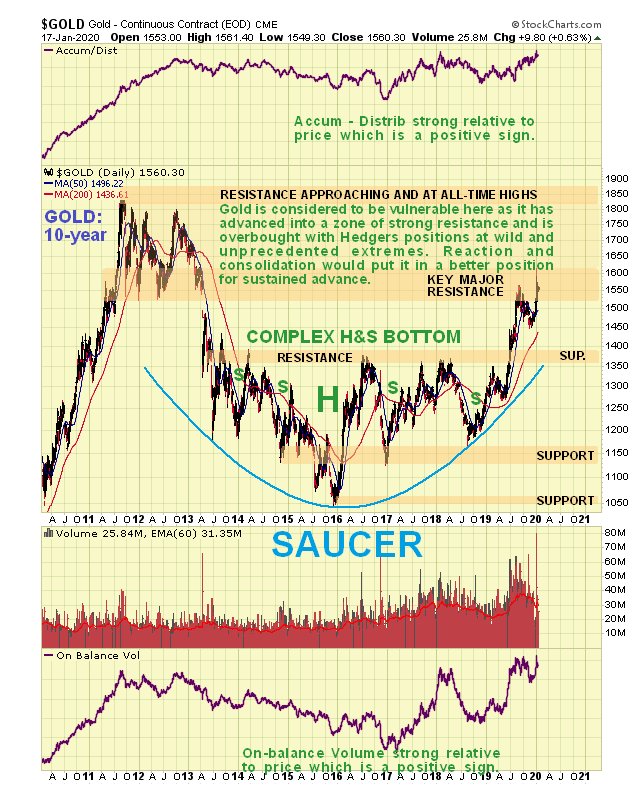 Thus it remains a cause for concern (or it should be for gold bulls) to see gold’s latest COTs continuing to show high Commercial short and Large Spec long positions. Is it “going to be different this time”? – the latest Hedgers charts that we are now going to look at suggest not. 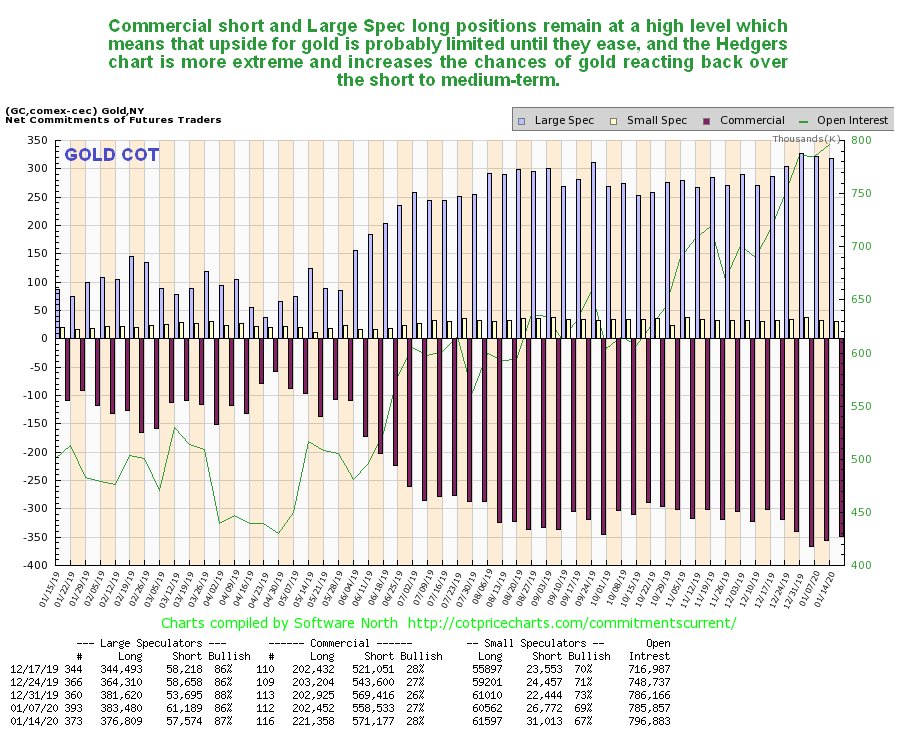 The COT chart only goes back a year. The Hedgers charts shown below, which are a form of COT chart, go back many years, and frankly, they look pretty scary.

We’ll start by looking at the Hedger’s chart that goes back to before the 2011 sector peak. On it we see that current Hedgers positions are at extremes that way exceed even those at the peak of the 2012 sucker rally, which was followed by the bulk of the decline in the bearmarket that followed. Does this mean that we are going to see another bearmarket like that – no it doesn’t, but it does mean that these positions will probably need to moderate before we see significant further gains. 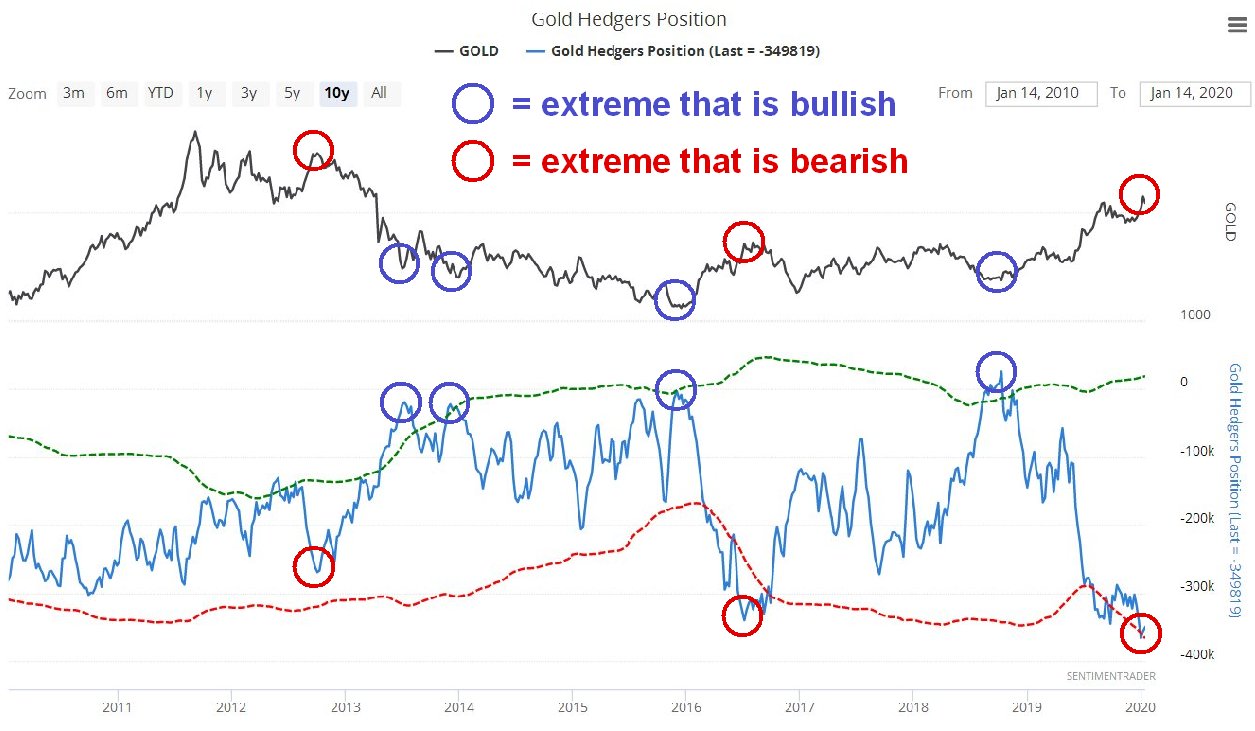 Looking at the Hedgers chart going way back to before the year 2000, we see that the current readings are record readings by a significant margin and obviously increase the risks of a sizeable reaction. We can speculate about what the reasons for a decline might be, one possibility being the sector getting dragged down by a stockmarket crash after its blowoff top, which may be imminent, as happened in 2008, since it remains to be seen whether investors will rush into the sector as a safe haven in the event of a market crash. 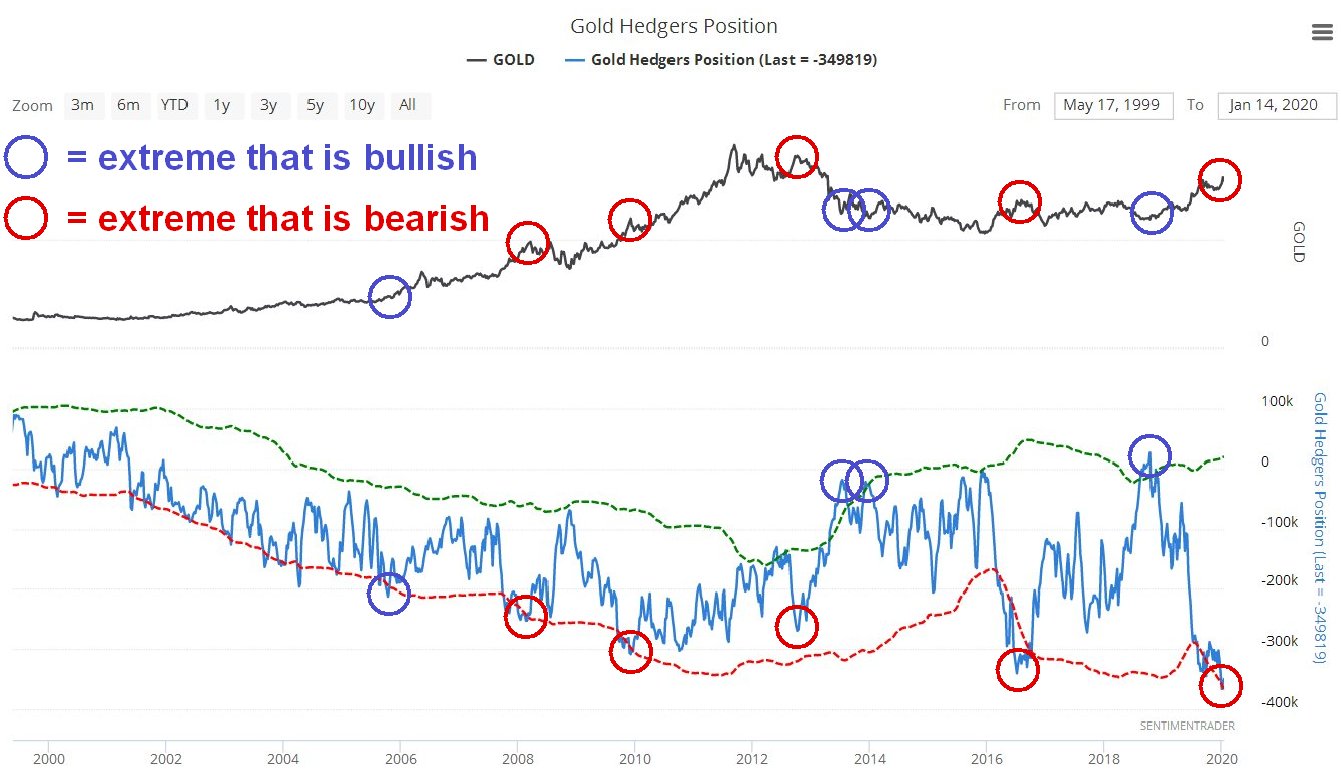 Turning now to Precious Metals stocks, we see on its latest 10-year chart that GDX still looks like it is completing a giant Head-and-Shoulders bottom pattern. However, it is currently dithering just beneath resistance at the top of this base pattern, which means that it is vulnerable to backing off. 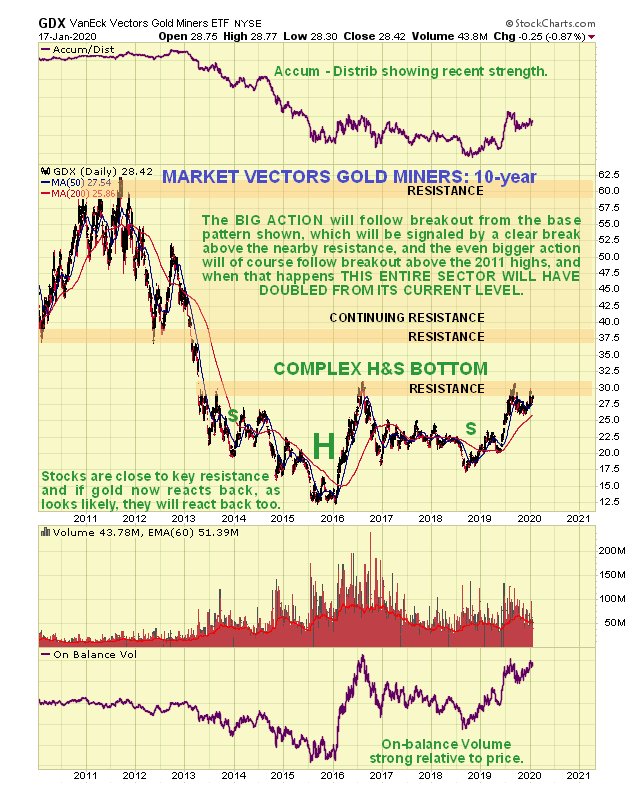 So, how then does gold stock sentiment look right now? As we can see on the 5-year chart for the Gold Miners’ Bullish Percent Index, bullishness towards the sector is now at a very high level, 84.6%, which makes it more likely that stocks will drop soon rather than rally, and what they could do of course is rally some to increase this level of bullishness still further, and then drop. 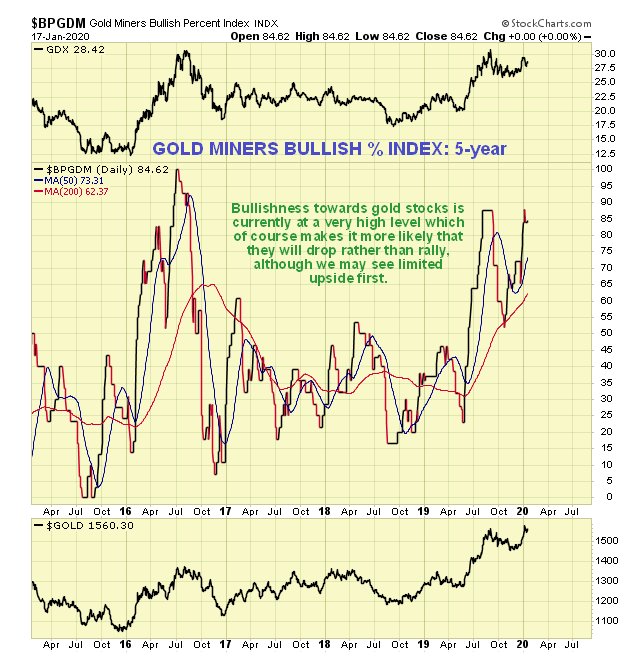 Does all this mean that investors in the sector should suddenly rush for the exits? No, it doesn’t, especially as the charts for many individual stocks across the sector look very bullish, and it may be that all that is needed is a cooling period of consolidation. However it does make sense to use Hedges at extremes, such as leveraged inverse ETFs and better still options as insurance, which have the advantage of providing protection for a very small capital outlay, a fine example being GLD Puts which are liquid with narrow spreads. We did this just ahead of the recent peak when Iran lobbed a volley of missiles at Iraq. We will not be selling our strongest gold and silver stocks, but instead look to buy more on dips.