A Happy 4th July 2020 to all US subscribers...
Saturday, July 04, 2020
Off Topic - the value of drone videos when travel is difficult or impossible...
Saturday, July 04, 2020
LET'S HEAR IT FOR FANSUNITE...
Tuesday, June 23, 2020
Stocks are like living things, they are born, grow, mature, age and decline and then die, or are reborn, which reflects the fact that the companies on which they are based do likewise. This should not be so surprising since companies are comprised of people. Whole industries come and go as a result of the evolution of technology and changing fashions. A simple example of this is provided by the music industry, where first you had vinyl, then cassettes, then CDs and now the industry is moving to downloads, with vinyl making a niche comeback. If you as a company had insisted on continuing to produce music on vinyl or on cassettes, you would have gone the way of the Dodo bird. The only instances where companies and stocks do not go through the entire cycle to the death phase are unique cases where the company comes out with a very distinct product that has staying power, like Coca Cola and McDonalds and even these can’t go on for ever. Even Apple’s grandiose donut HQ near San Francisco will probably end up a tumbleweed strewn ghost town, but don’t tell management that, they have to find something to do with their current massive windfall profits. The normal stock lifecycle plays out over a matter of some years although it can vary wildly with individual stocks depending on the industry the company is in. A chart showing a simplified stock lifecycle is shown below. A company is born into Stage 1, the basing phase, which can be likened to a young tree in a forest, that has to contend with hazards like rabbits and falling branches and needs enough light to make it the canopy above. At this stage many young companies fall by the wayside, due to insufficient funds and/or being crowded out by the competition or other reasons. During this stage the company must “get its act together” and if it succeeds in establishing itself in the marketplace and securing a revenue stream from sales, it makes it to Stage 2, the growth phase, the equivalent of the young tree making it to the canopy above and finding its place in the sun and growing and developing. This is the stage at which a company’s products may become very popular and sales may expand a lot generating big profits. Eventually, however, growth reaches its limit: “no tree grows to the sky”, and with Parkinson’s Laws dictating rising bureaucracy and costs with management typically feasting on the profits, growth slows as the company matures and ends up treading water until it succumbs to the growing inroads made by leaner and meaner competition, or to a decline in popularity of its products, or both. This is Stage 3, the top phase. Once the company loses its edge and sales and profits decline it enters Stage 4, the declining phase. This often ends in a crisis where either the company goes broke or it reinvents itself in another Stage 1 basing phase from which it may succeed in emerging into a new Stage 2 growth phase. 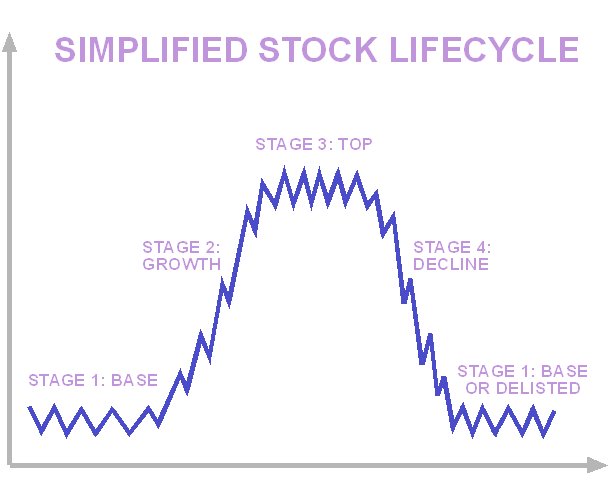 There are innumerable examples of this stock lifecycle playing out in the markets all the time. Sometimes you have entire sectors caught up in it, like Precious Metals stocks which enjoyed a Stage 2 boom in the 2000’s before a Stage 3 top out in 2011 that led to a vicious Stage 4 bearmarket thereafter that wiped out a lot of believers, and a dramatic example was the Tech bubble leading into 2000. Cannabis stocks are believed to be completing a heavy correction within an ongoing Stage 2 bullmarket. We have a range of more obvious Stage 2 stocks on the site like Scientific Metals, Select Sands and UGE International. With an awareness of this stock lifecycle, our goal is to find those stocks that are in Stage 2 uptrends and ride them for all they are worth. Sometimes we can finesse it as we have done successfully with Scientific Metals, and keep dodging the corrections to maximize profits. The Stage 3 top area is a tricky place to make profits, although aggressive traders may successfully play the swings, if they are big enough. Stage 4 is a no-go area, unless you are out to make money on the short side. Stage 1, the basing phase, is associated with “Smart Money” who get in cheap ahead of the crowd in Stage 2, although even here you have to be careful – the basing phase can last years and you can end up feeling like a lemon if you buy too early and get stuck with something that does nothing for a long time, as happened to us with some of our recent picks that we bought too early. A stock may be fundamentally very cheap at say 20 cents in the Stage 1 basing phase, but because it is very cheap it can easily drop to 10 cents, in which case you are nursing a 50% loss, regardless of whether it goes on to break out into Stage 2 and advance to $2.00 or whatever, and here we should note that some stocks never make it from Stage 1 to Stage 2, they wither and die like a young tree in the forest starved of sunlight. It is tempting to try to anticipate the breakout into Stage 2, however, because a breakout from a low level can quickly lead to 100% or 200% gains in short order just on the breakout move. We achieved this with UGE International which we bought last December, aided by clues provided by the volume pattern. The correct interpretation of the volume pattern is the most effective way to call these breakouts ahead of time. This is where we should focus our attention… 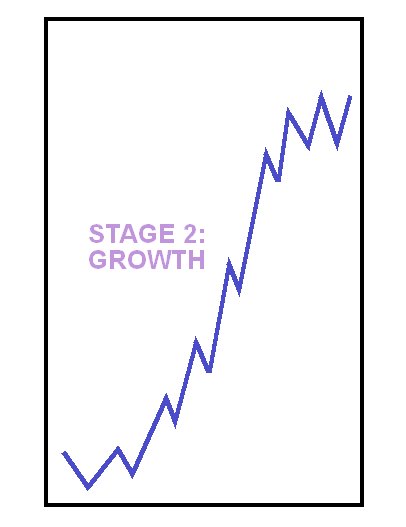 A key point to make is that the simplified lifecycle chart shown above makes it look very easy to pinpoint where stocks are in their lifecycle. In practice it is not so easy – don’t forget there are armies of brokers, investors and computer bots that are trying to do just that, which is why most stock charts are not so clear. Anyone who has experience of the markets knows that seemingly insane gyrations are not an infrequent occurrence, so we cannot expect to be right all the time in our interpretations, and only a fool would do so. What matters is to be right most of the time, and to limit loss when wrong. So to recap, our goal is to isolate those stocks that are in Stage 2 uptrends and ride them for all they are worth. We also try to anticipate breakouts from Stage 1 basing patterns into Stage 2 uptrends, because of the increased leverage that affords, and while this can be tricky, the success rate can be improved considerably by the correct interpretation of the volume pattern. As pragmatic traders we couldn’t give two hoots what sector they are in, because we don’t fall in love with sectors like Precious Metals or Tech or whatever. If you want to fall in love, do it with a man or woman or a pet dog or even a tree, not some company’s stock. The stockmarket is a game, and the best way to win it is to find stocks that are definitely in Stage 2 uptrends, and then ride them until they top out in Stage 3, then switch to others. It is an entertaining quest to find such stocks, and I will appreciate the reduction in my workload that will result in YOU finding some of these stocks and then alerting me to them. Write to me at clivemaund@gmail.com with any you think you have spotted and I will give you my opinion.
End.