RECONCILING THE US DOLLAR OUTLOOK with the SUPER BULLISH GOLD AND SILVER COTs...

DOLLAR update as LOSS OF RESERVE CURRENCY STATUS LOOMS...
Sunday, August 27, 2017
RECONCILING THE US DOLLAR OUTLOOK with the SUPER BULLISH GOLD AND SILVER COTs...
Tuesday, July 25, 2017
US DOLLAR update...
Friday, May 13, 2016
Because the dollar has such an important bearing on everything, especially the Precious Metals, it is timely for us to take a close look at it here after its recent steep drop, for as some of you may have seen, a number of indicators pertaining to the dollar suggest that, possibly after some further downside it is likely to bounce, or at least take a rest in a sideways range for a while, before the decline perhaps resumes in earnest. We’ll start by looking at a couple of these indicators. The latest US dollar Hedgers chart, which is a form of COT chart, is certainly starting to look bullish, and until these positions ease somewhat, further significant downside for the dollar in the short-term looks unlikely. 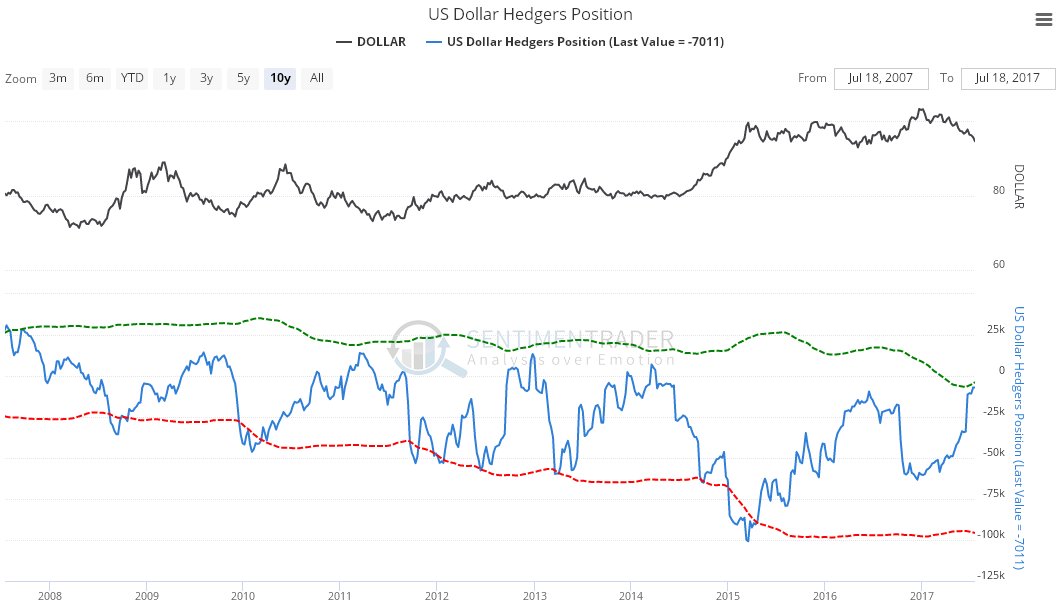 Click on chart to popup a larger clearer version.
Meanwhile the latest Dollar Optix, or optimism chart, also shows that pessimism is getting overdone. This doesn’t necessarily mean that the dollar’s downtrend is done, however, as minor rallies can cause this to ease before it then plumbs new lows. These two indicators taken together suggest that a relief rally is likely in the dollar soon, perhaps after it drops a bit lower first, although they don’t mean that the rally will get very far. 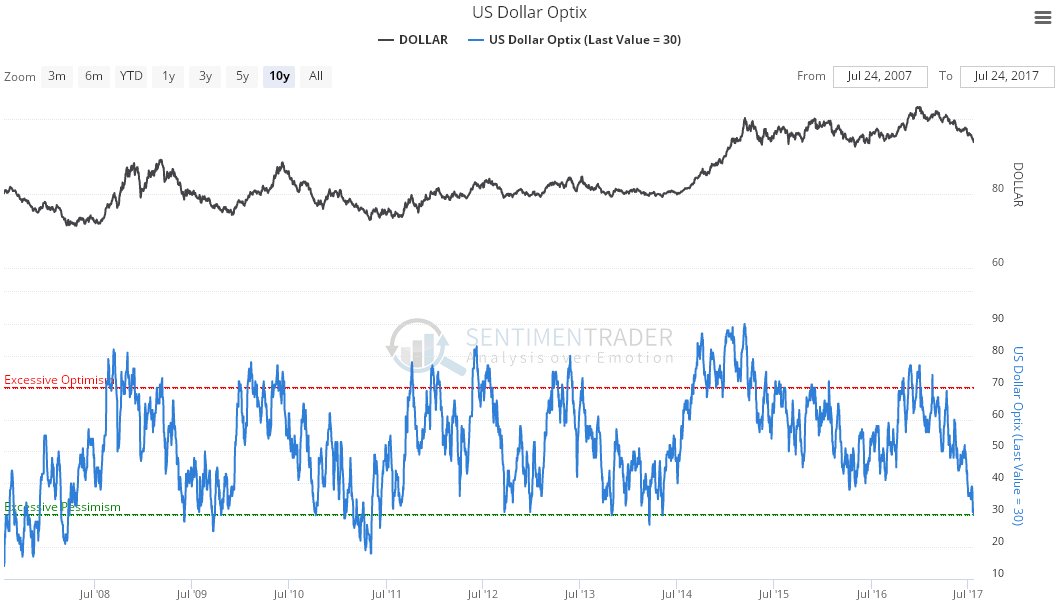 Click on chart to popup a larger clearer version.
Alright, so how does this square with our stated super bullish position on the Precious Metals, gold and silver? Well, it doesn’t, of course, since a dollar rally normally means that gold and silver will drop back. So what’s going on here? The latest COTs for gold and silver were super bullish, especially silver, which was even more bullish than late 2015, and the key point to make here is that they remain so, regardless of any other considerations or what is going on elsewhere. This being so it means one of two things – either the dollar and gold and silver are going to rally in unison, unlikely but possible, or after some kind of relief rally or consolidation pattern, the dollar’s decline will resume, perhaps with a vengeance, and as we will see it could possibly accelerate into a crash. Turning now to the charts for the dollar itself, we start by looking at its latest 9-month chart. As we had already figured out a month or two ago, it is being forced lower at an accelerating pace by a parabolic downtrend. Now we are arriving at a critical juncture above key support with the key indicators above suggesting a bounce or a pause in the decline. However, should the parabola force a breakdown below the support, a really severe decline or crash will be in prospect. 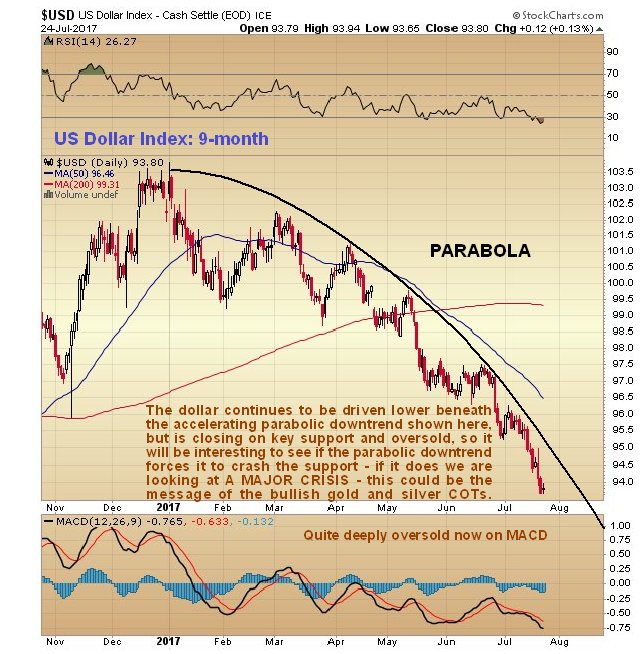 On the 4-year chart we can see how the parabolic downtrend has forced the dollar down towards the key support approaching the lower boundary of a large bearish Broadening Formation. While several indicators are suggesting that it will take at least a breather here, if it does break down the consequences for the dollar are likely to be dire – and this could be the message of the super bullish gold and silver COTs. 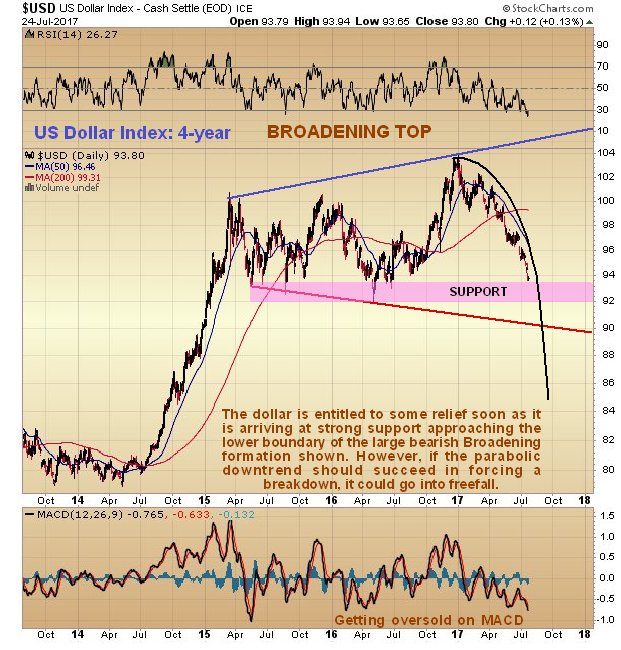 It’s also useful to look at the 4-year chart for dollar proxy, the PowerShares US Dollar Index Bullish Fund, which looks about the same as the dollar index chart, except that we can also look at volume and volume indicators. The Accum-Distrib line in particular is extremely weak, and gives us an additional clue that the dollar may be in the early stages of a really serious decline. Again, this could explain the strongly bullish gold and silver COTs. 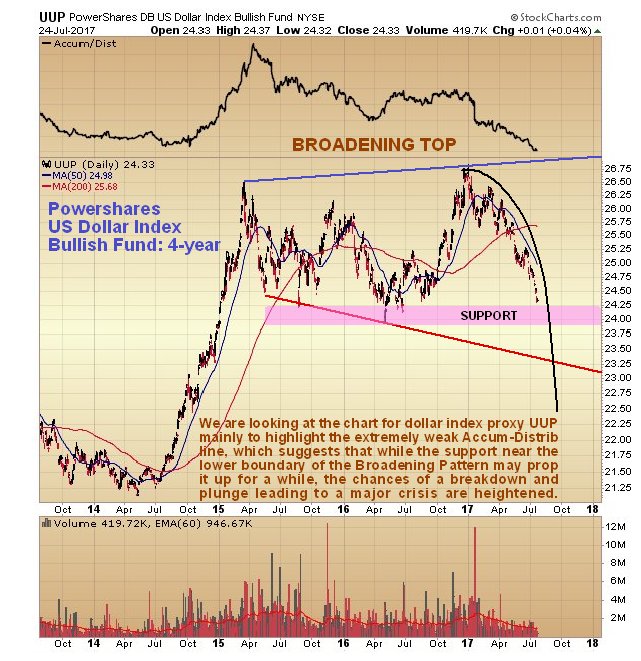 Actually, it’s not hard to understand why the dollar could crash soon. Those in control of the US have been struggling to maintain the US dollar’s supremacy as the global reserve currency for years, which has involved the maintenance of a massive military machine spanning the world, with hundreds of overseas military bases designed to project power and impose dominance. The reason that the dollar’s dominance as the Global Reserve Currency is so critically important to the US and affords it such enormous, disproportionate power is that it enables the country to effectively parasitize the rest of the world – instead of trading good and services for other goods and services, as the rest of the world is obliged to do, it just prints up mountains of intrinsically worthless paper which it hands over for goods and services that are the product of real effort – it is effectively playing the rest of the world for suckers, and has been since the end of the 2nd World War. Those who have dared to challenge the dollar’s hegemony, by attempting to trade in other currencies, like Gaddafi and Saddam Hussein, have been killed and their countries left in ruins. Now the rising Eastern powers like China are threatening the hegemony of the dollar, but they can’t be attacked because they have nukes and can strike back. Russia has nukes too and so can’t be attacked physically, except perhaps by means of a “1st strike” and its parallel drive to escape dollar hegemony is the reason that it has instead come under economic assault via an artificially low oil price and sanctions, and why the democratically elected government of the Ukraine was overthrown by heavily bankrolled neo-Nazis to install a pro-US, anti-Russian puppet government. The point to grasp in all this is that, to put it crudely, the US has managed to “piss off” most of the world, with its heavy handed approach to maintaining dollar dominance using military force when it can get away with it, the only countries pleased with its efforts being Israel, sidekick countries like Poland and the UK, and client States like Saudi Arabia, who are in for a nasty shock when they discover, after Iran has been dealt with, that they are no longer important. The East is playing a carefully calculated game to rid itself of dollar dominance, which includes buying up huge quantities of gold as fast as the West is prepared to sell it to them – not for them Comex paper gold, and those of you who have read “The Art of War” will know that they are not to be underestimated – thus the continued US threat of using brute force, exemplified by the extremely provocative and thuggish NATO military exercises hard up against the Russian border in Latvia and Poland etc that took place not too long ago, will be blunted and turned against it. What is likely to happen is that the East will gradually circumvent the dollar until the US economy collapses, no longer able to afford the huge burdens of its massive debts, Welfare State and the Military drain. This makes the situation very dangerous, because the US will be tempted to use even more force to maintain its dominance while it can still afford to. Within a matter of months after taking office Trump, who held out hope to many people that he might tackle the severe problems dragging America down, was neutralized by the Deep State – there was no way they were going to let a “champion of the common man” make inroads into their positions of power and privilege and disturb the status quo that serves them so well, and they have already succeeding into reducing his Presidency to a shambles. They control the media and a central plank of their plan to discredit him and undermine his authority was the story that he was involved with Russia in a plot to rig the election in his favor, which had the additional benefit of casting Russia as a villain. It didn’t matter that this assertion was ludicrous, the media colluded to spin it, operating on the basis that if you sling enough mud for long enough, some of it will stick. As if this wasn’t enough they have started attacking his family in recent weeks, and it is obvious that they will step this up if they don’t achieve the desired result. In the face of all this formidable resistance Trump has essentially given up and is already a “lame duck” President, reduced to expressing his frustration with the system via tweets. Instead of "draining the swamp" as he promised, he is instead well out of his depth and up to his neck in it. Finally, we will take a quick look at the very long-term 20-year chart for the dollar index. This chart makes plain that if the dollar has peaked, and is soon to enter a severe decline, it won’t be the 1st time in the past two decades, as between 2002 and 2008 it suffered a massive drop – and that was long before it was threatened with being delisted as the global reserve currency. This chart also shows that it could drop a long, long way from the bearish looking Broadening Top that may now be approaching completion. 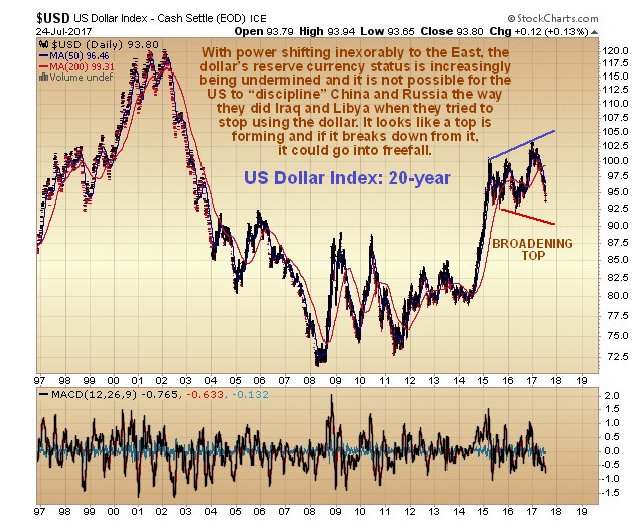 Conclusion: the latest extremely bullish COT charts are not negated by the dollar being oversold here and some of its indicators looking positive. The bigger picture is that the dollar may be headed for a breakdown and severe decline or even a crash. Important footnote to US subscribers: it is very important to attempt to protect your capital from a serious loss in the value of the US dollar, which looks set to occur regardless of any short-term rally to alleviate its current oversold condition. The Canadian dollar is a real standout in this respect, because Canada is partly a resource based economy and should get a big boost from the expected bullmarket in gold and silver, and other metals, which will translate into a strong Canadian dollar. The ideal solution for US subscribers, if this route is open to you, is to set yourself up to buy resource stocks on the Toronto and Venture exchanges.
End of update.
Posted at 9.35 am EDT on 25th July 17.