DOLLAR update as LOSS OF RESERVE CURRENCY STATUS LOOMS...
Sunday, August 27, 2017
RECONCILING THE US DOLLAR OUTLOOK with the SUPER BULLISH GOLD AND SILVER COTs...
Tuesday, July 25, 2017
US DOLLAR update...
Friday, May 13, 2016
The dollar is on course to lose its reserve currency status. This is not something that will happen overnight, it will be a process, but at some point there is likely to be a “sea change” in perception, as the world grasps that this is what is happening, which will trigger a cascade of selling leading to its collapse, whereupon gold and silver will rocket higher. A big reason for the dollar finding support in recent years and doing relatively well versus its peers has been the perception that the US is the last and best “safehaven” in a world beset with instability and terrorism etc , but that perception is changing as US society starts to polarize in a dangerous manner. In addition, the continued provocations and threats by the US towards China and Russia has driven them into making preparations to ditch using the dollar, and these preparations are well advanced, and have included buying huge quantities of gold. Thus the dollar is looking increasingly vulnerable. On the long-term 20-year chart for the dollar index we can see that it is still at a fairly high level after its gains during 2014 and 2015, but appears to be marking out a “Broadening Top” pattern. On this chart we can also see that if it proceeds to fall hard soon, it won’t be the 1st time – it suffered a brutal decline between the start of 2002 and early 2008 – and that was before it was threatened with the loss of its reserve currency status, so the looming bearmarket could clearly be much, much worse. 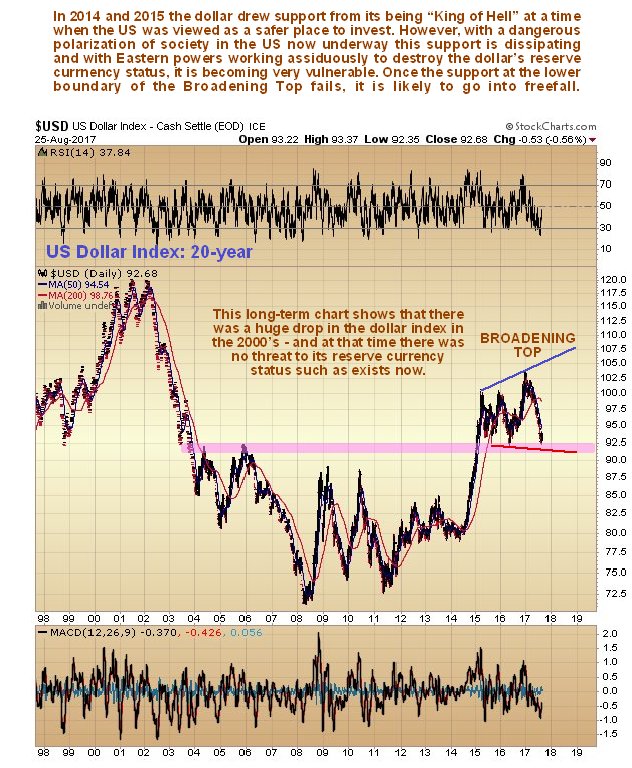 On the 4-year chart we can examine the Broadening Top in much more detail. The rally to a peak at the end of last year was due to euphoria over Trump’s election, but it since dropped right back across the pattern as reality has reasserted itself, and of course Trump himself has now been totally emasculated by the Deep State, evidenced by a string of U turns on his campaign promises, the latest being on Afghanistan last week. He is now nothing more than a figurehead, a Deep State puppet, and it will be rather pitiful to watch his diehard supporters clinging on to the belief that he will actually make any difference. 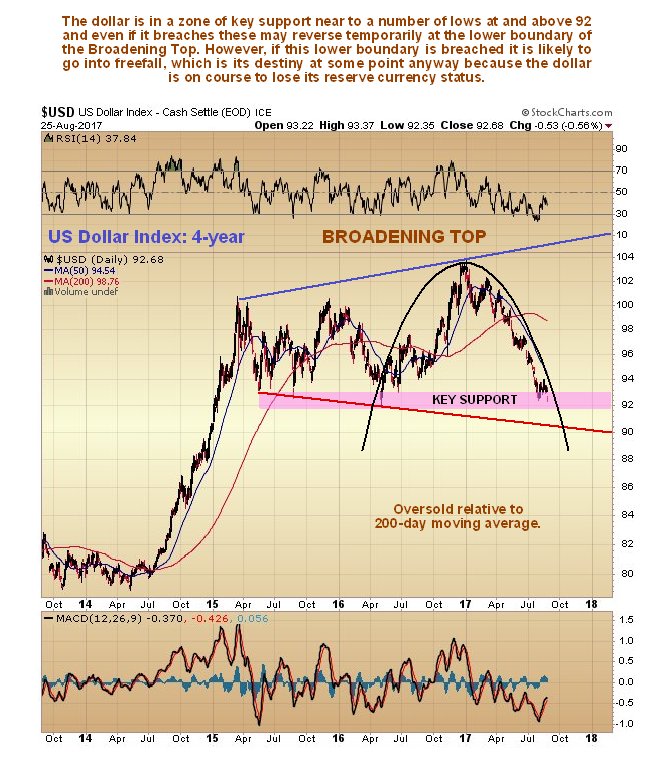 In recent weeks the dollar has come rattling all the way back down to the support near to the earlier lows towards the bottom of the Broadening Top, driven lower at an accelerating rate by the parabolic downtrend shown, and while this could soon force a breakdown from the top pattern, it’s a tough call because the support in this area and down to the lower boundary of the pattern is strong, and a high short position has built up, so these two factors together could break the dollar above the parabola leading to a short to medium-term relief rally. However, the long-term outlook remains grim, whether this happens or not, and if it does happen, US readers should seize the opportunity to switch out of US dollar denominated assets into something like the Canadian – the Canadian dollar should do particularly well because if the US dollar does plunge, hard assets like gold and silver will soar, and the Canadian economy is resource based. Canada is also attractive for US investors because it is a relatively stable economy close to home. The Hedgers chart for the dollar certainly looks bullish for the short to medium-term as it shows the positions of the large Commercial Hedgers, who are usually right. As we can see, they have almost completely cleared out their short positions, which are now at levels that have in recent years have always lead to a rally. This is part of the reason for us turning cautious on the Precious Metals sector short-term last weekend, and an additional reason is the continued growth in Commercial short positions in gold and silver. This doesn’t mean we are turning bearish, rather, it may throw up another opportunity to buy our favorite gold and silver stocks at even better prices in the weeks ahead. 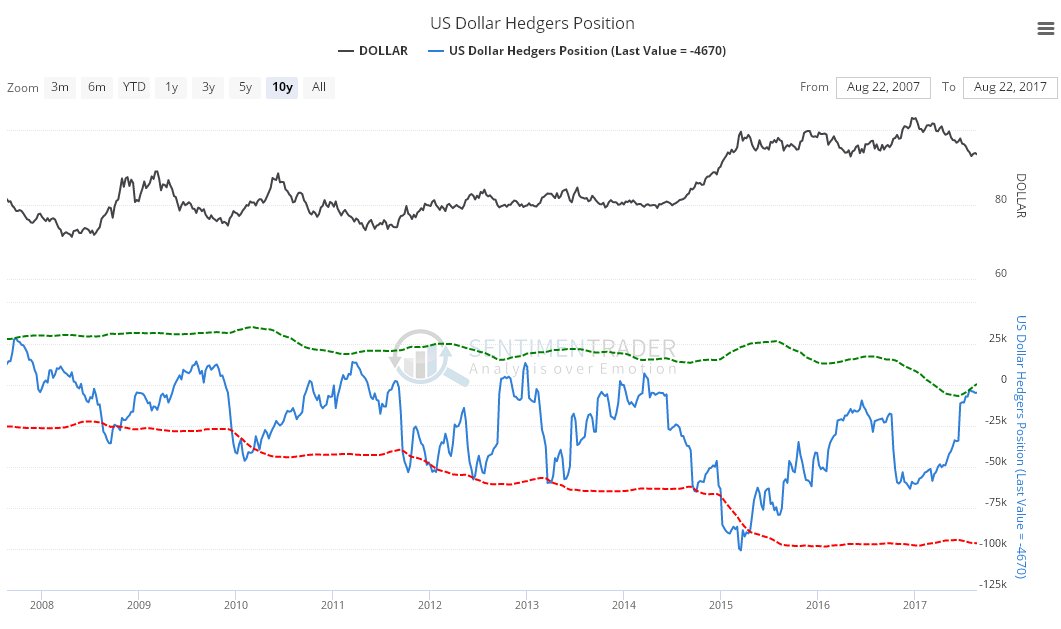 Click on chart to popup a larger clearer version.
The 4-year chart for dollar proxy UUP provides some additional evidence that the dollar is headed for the rocks, since its Accum-Distrib line is very weak, being already at a lower level than it was at in mid-2014 when UUP was at a much lower level… 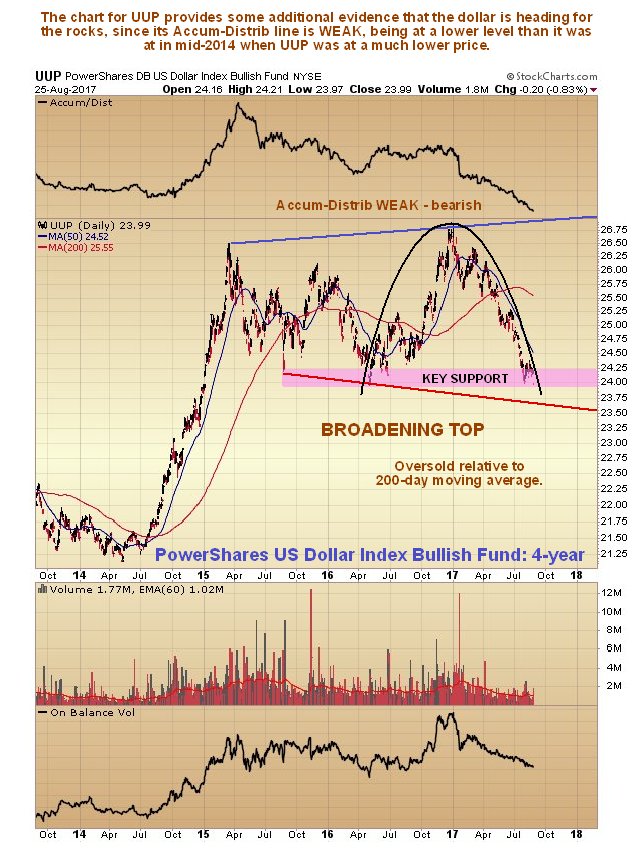 On the 1-year chart we can zoom in on the parabolic uptrend in force from the start of the year. For a while, about a week or two ago, it looked like it had broken out above the parabolic uptrend, but Friday’s rather sharp drop suggests that it remains in force, and its position requires adjusting to be more generous. After adjusting the downtrend it now looks like the dollar just completed a bear Flag that allowed the earlier oversold condition to partially unwind. If this is true, then it is now likely to continue falling down to the lower boundary of the Broadening Top, the red line, and there we should again watch out for a snapback rally, since we can presume that the short position will have built up to an even higher level by then, although having broken down through a lot of support in the 92 area, it may be beyond help by this point and simply plunge, once that happens the Precious Metals will finally take off higher in a decisive manner. 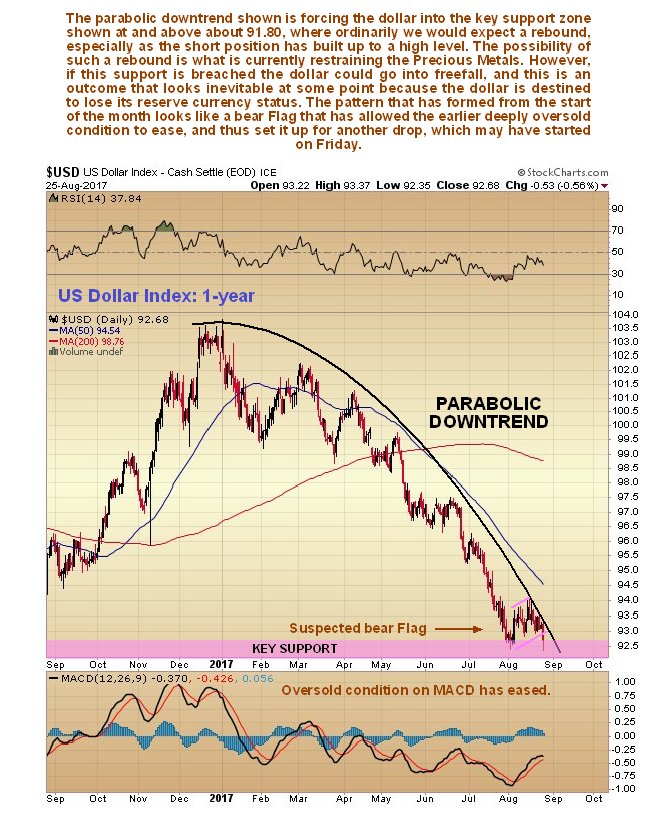 Meanwhile gold’s incubating major new bullmarket is like a new model under a tarpaulin at an auto show – you know it’s under there, but you don’t know exactly when they will whip the cover off and unveil it… 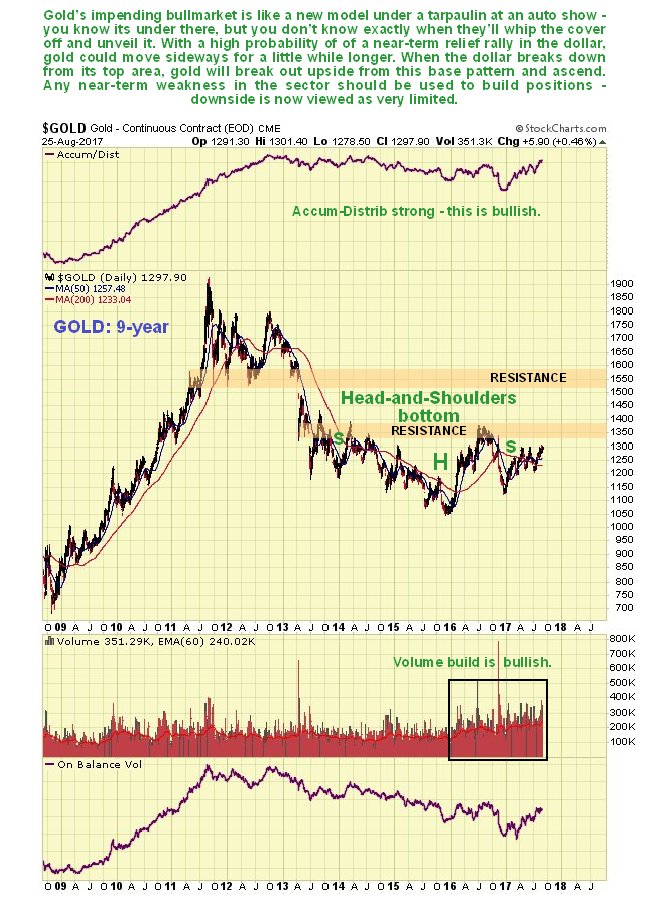