GOLDEN TRIANGLE STOCK update after plunge...
Tuesday, July 23, 2019
GOLDEN RIDGE RESOURCES update...
Thursday, July 11, 2019
GOLDEN RIDGE RESOURCES...
Wednesday, March 13, 2019
Unlike similar Golden Triangle stock Aben Resources, which is the subject of a parallel article, we didn’t buy back Golden Ridge late last year when it dropped to a very low level, but we should have as that was the bottom and it has since improved. Like Aben Resources, Golden Ridge appears to have an annual cycle that includes a quite dramatic Summer spike fuelled by speculative interest during the drilling season, although we can only see 2 past spikes because Golden Ridge was restructured in 2017 and effectively reborn then, so we don’t have any meaningful chart history going back further than 2017. Last year’s spike was dramatic, but as we can see it was preceded by a deceptive reaction back to a point a touch below where we bought it last Spring . We sold half of our holding close to the spike top, but should have sold the lot because soon after it cratered, but even so we still got out with a reasonable profit on the remainder. 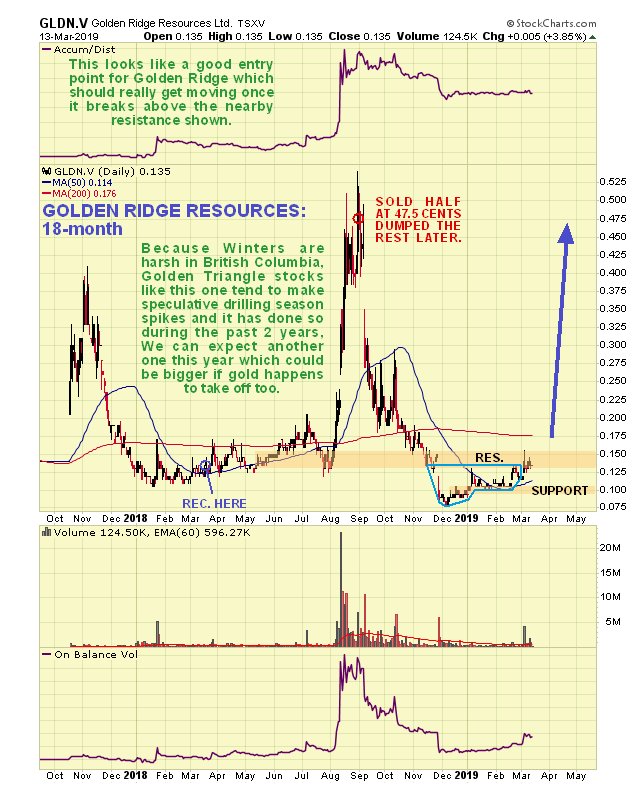 On the 6-month chart we can see recent action in much more detail. After the capitulative plunge on high volume late in November, it finally hit bottom early in December, and then proceeded to mark out a low Cup & Handle base which it is now starting to advance away from. The measured advance from the lows was due to the earlier unfavorable alignment of its moving averages, which is now improving and which symbolized that the stock needed time to recover following the damage to sentiment resulting from the drop. This gradual advance has also allowed time for downside momentum (MACD) to drop out and for the 50-day moving average to turn up so that it now provides support. There has been a bullish buildup in upside volume this month as it challenges and prepares to take out the resistance level shown that it has now arrived at. The overcoming of this resistance and a breakout above the 200-day moving average will be important positive technical developments that should lead to marked acceleration as it moves towards its drilling season spike. 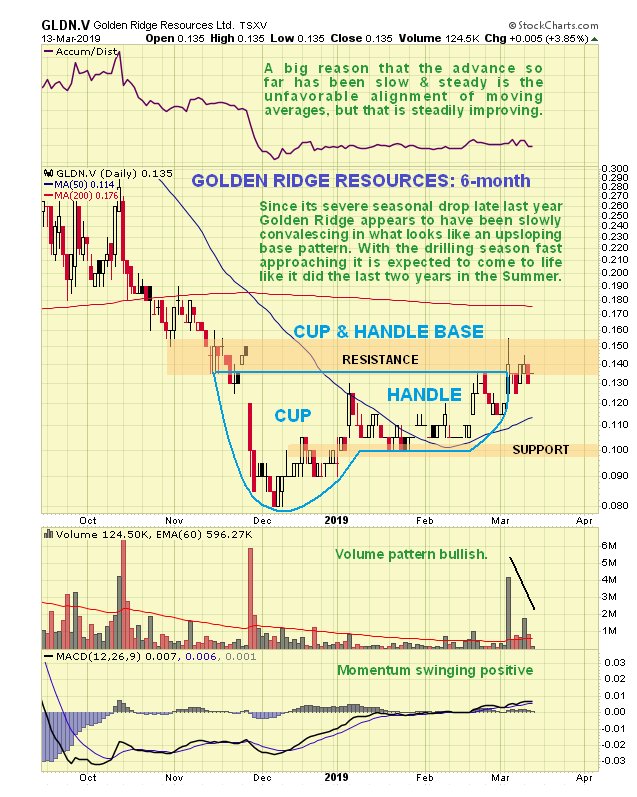