and what about Platinum??...

PLATINUM BREAKS OUT & JOINS COPPER IN SUPPORTING A MAJOR NEW UPLEG IN GOLD & SILVER...
Friday, October 15, 2021
and what about Platinum??...
Thursday, July 04, 2019
PLATINUM update AFTER CAPITULATIVE SELLING CLIMAX, and implications for other metals...
Sunday, July 08, 2018
A number of subscribers have shown interest in the outlook for platinum, which is also a Precious Metal, and as it is quite a while since we have looked at it, it’s a good time to do so with gold and silver starting to take off in new bullmarkets. In fact, platinum hasn’t done much since we looked at it many months ago. It has remained weak, but there are some subtle signs that this may soon change. One of the main points made when we last looked at it was how weak it was compared to gold – you can now buy 4 times as much platinum as gold as you could early in 2008, which certainly makes it clear how undervalued it is relative to gold. We’ll start by looking at a 6-month chart for platinum, on which we see that the new bullmarket in gold is at last starting to rub off a bit on platinum, for several days ago it broke higher out of a small Double Bottom. Up to now though volume and the Accumulation line remain weak and we will want to see these improve – and of course they can be expected to if platinum succeeds in breaking out of its major downtrend shown on our 10-year chart. 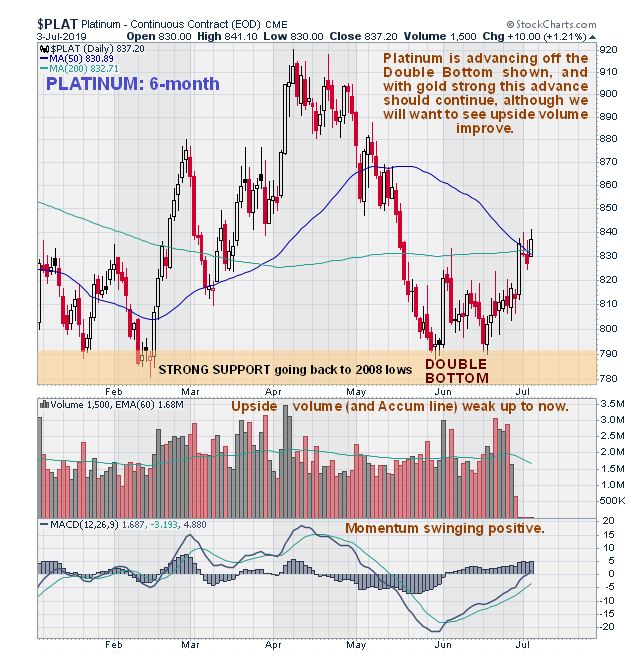 Zooming out now to review the 10-year chart we see that platinum has been stuck in a stubborn downtrend since 2011 – hardly surprising considering what has happened to gold and silver during the same time period. However, it is on strong support and not far from breaking out of the downtrend, and is expected to do so soon if gold continues higher. The steady buildup in volume over the years to its current high level increases the likelihood of a major reversal soon. 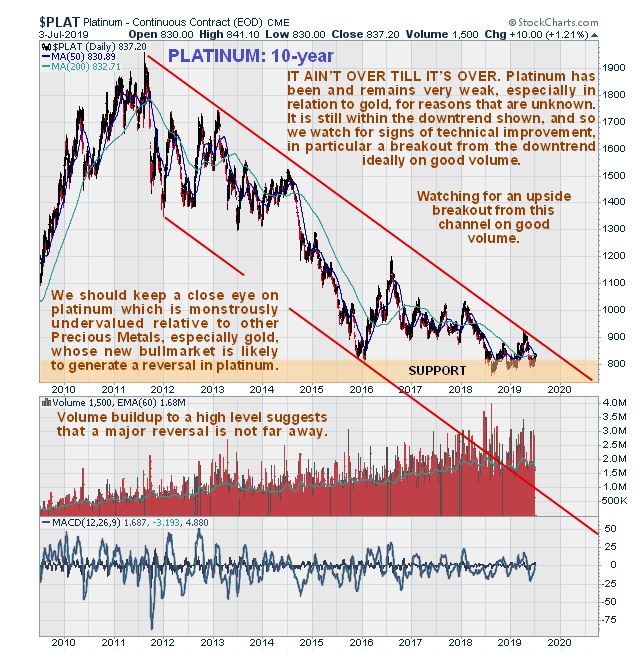 It is on the 20-year chart that we get to see what is really going on with platinum. Following a parabolic blowoff top early in 2008, it crashed along with everything else, but the plunge in platinum was particularly severe – much worse than that of gold and it even outdid silver on the downside. On this chart it becomes apparent that all of the action from the early 2008 high to the present is a gigantic 3-wave A-B-C correction characterized by an initial dramatic crash phase, the A-wave, which is followed by a B-wave recovery that fails to make it back to the highs, before the price then enters a much slower and corrosive downtrend, the C-wave, that can go on for a long time, and has because it has been in force for almost 8-years now. What commonly happens with these 3-wave A-B-C corrections is that the C-wave bottoms at or close to the A-wave trough, where there is of course strong support, and that is what seems to be happening here – and we would expect it to as gold has just broken out into a major new bullmarket, and it is hardly likely that either platinum or silver won’t follow suit. So the omens are good for a major new bullmarket starting soon in platinum and it will of course be signaled by a breakout from the big downtrend drawn on our charts. 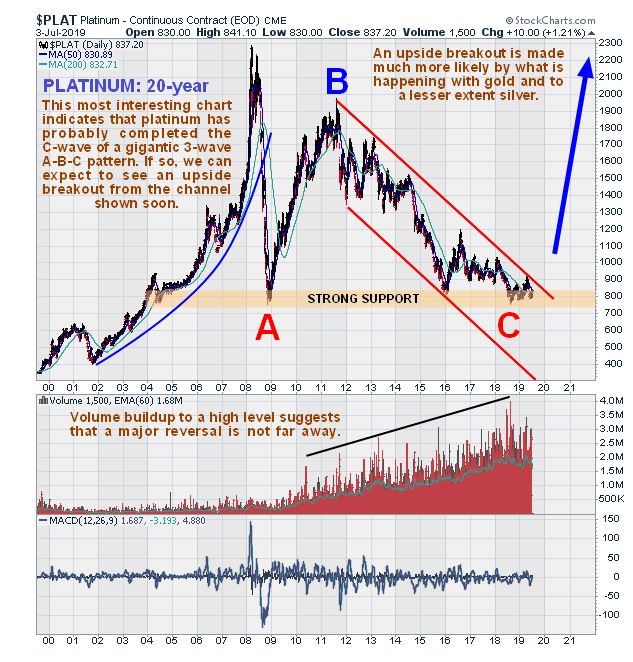 Now we will proceed to see just how undervalued platinum is compared to gold, again using a 20-year chart. On it we see that platinum has performed miserably compared to gold for many years - as mentioned above you can buy 4 times as much platinum for the same amount of gold as you could back at its early 2008 peak. On this chart we can see how platinum way outdid gold on the downside during the 2008 market crash, but after that continued even lower within the confines of a giant Falling Wedge pattern. However, this Wedge pattern is bullish in purport and with it now closing up, a period of outperformance by platinum relative to gold looks imminent, and given that gold has just entered a major new bullmarket it means that platinum could perform very well indeed going forward. 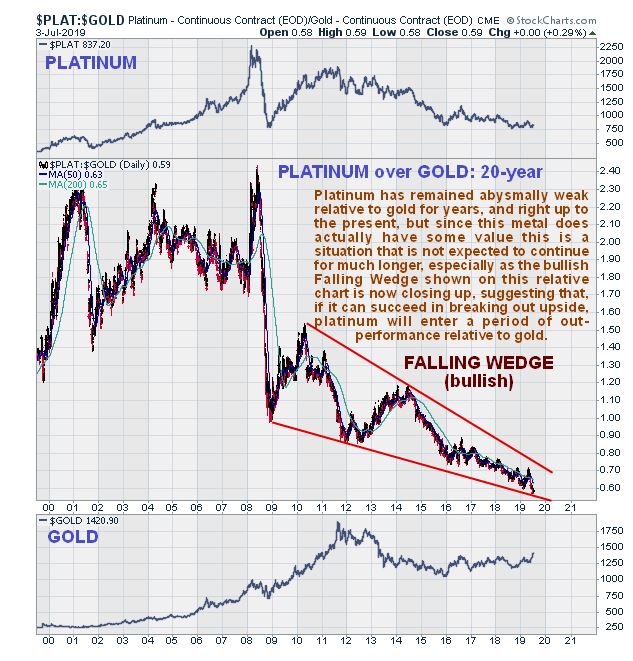 On the 20-year chart for platinum compared to silver, we can see that platinum has even managed to underperform silver over the years, although it has managed to hold up in recent years, since the 2011 silver peak. What is also interesting to observe on this relative chart is that a giant Cup & Handle base appears to be completing, which suggests that a period of outperformance by platinum relative to silver lies ahead, and given that the outlook for both gold and silver is now bright, platinum looks like it is going to be a most attractive investment soon. 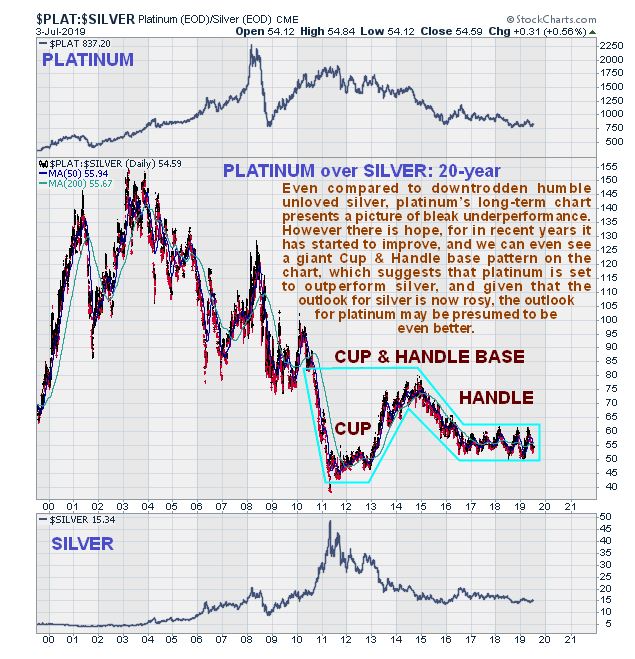 A fundamental point worth ending on is that about 70% of the world’s platinum is produced in South Africa, a country which is on the road to anarchy and ending up as a banana republic, as it is treading the same path that Zimbabwe did, that ended in the dead end of hyperinflation and widespread destitution. The political instability that goes with this could easily disrupt platinum production in Soth Africa and be a big driver for higher prices. End of update.
Posted at 11.30 am EDT on 4th July 19.